Submitted Successfully!
Thank you for your contribution! You can also upload a video entry related to this topic through the link below:
https://encyclopedia.pub/user/video_add?id=11210
Check Note
2000/2000
Crosslinking of Electrospun Gelatin Nanofibers
Edit
Upload a video
This entry is adapted from 10.3390/polym13121973

Electrospinning can be used to prepare nanofiber mats from diverse polymers, polymer blends, or polymers doped with other materials. Amongst this broad range of usable materials, biopolymers play an important role in biotechnological, biomedical, and other applications. Biopolymers like gelatin, however, need to be crosslinked for most applications.

Gelatin is derived from collagen by partial hydrolysis, either by acid processing (type A) or by alkaline or lime processing (type B) [1]. Gelatin is often processed from waste, e.g., from fish skin and bones after filleting [2]. As a natural material, gelatin shows different physical and chemical properties, depending on its origin [3][4][5]. Values typically measured in comparative studies are, e.g., the molecular weight, amino acid composition, gel strength, viscosity, melting point, as well as breaking force, water vapor permeability, or water solubility.
Gelatin’s physical and chemical properties as well as the abundant availability make it interesting for diverse applications in food, cosmetics, and the pharmaceutical industry, but also as a coating of photographic films. Other important areas of application are biotechnology and biomedicine. Especially gelatin-based porous scaffolds are of high interest in tissue engineering [6]. However, here, a challenge occurs due to the water-solubility of gelatin, which necessitates crosslinking after producing the scaffolds. There are different physical methods, such as UV irradiation or dehydrothermal treatment [7][8], chemical methods such as exposure to glutaraldehyde in the form of vapor or liquid [9][10] or to ethylcarbodiimidehydrochlorine (EDC) combined with N-hydroxysuccinimide (NHS) [11][12], or enzymatic treatment by genipin or transglutaminases [13][14]. Generally, the crosslinking method influences the physical and chemical properties of the resulting scaffold [15][16][17].
This is especially important for nanofibrous scaffolds, as they are often produced by electrospinning. The structure of these ultrathin fibers is usually modified by the crosslinking process, in this way also modifying the porosity, mechanical properties, and suitability for cell growth.

Electrospinning can be used to produce nanofiber mats by a relatively simple technique. In brief, a polymer solution or melt is introduced into an electric field that is produced by a high voltage between two electrodes, where the polymer solution or melt is accelerated to the counter electrode and in this way stretched until ultrathin fibers are deposited on the substrate, which usually shields the counter electrode [18][19][20]. Often used techniques are needle-based electrospinning (Figure 1a) [21] and wire-based electrospinning (Figure 1b) [22], while there are diverse other technologies available in the broad range of needleless electrospinning.

Figure 1. Examples of electrospinning techniques: (a) Needle-based electrospinning, from [21], originally published under a CC-BY license; (b) wire-based electrospinning, from [22], originally published under a CC-BY license.
Electrospinning gelatin is in principle possible from aqueous solutions. For example, Zhang et al. investigated the influence of the spinning temperature as well as of the solid content in the solution on the morphology of the gelatin nanofiber mat [23]. They dissolved 30–40% gelatin with a molecular weight of 25 kDa in distilled water of 40 °C, varied the temperature of the solution in the syringe during spinning between 30 and 50 °C, and found that the viscosity decreased with temperature and increased with solid content, while the conductivity increased with temperature and with concentration. The average fiber diameter slightly decreased with temperature and strongly increased with gelatin concentration. Crosslinking was performed with EDC/NHS in a ratio of 2.5:1, resulting in reduced weight loss, significantly reduced swelling, and clearly modified stress–strain curves, which also depended strongly on whether they were measured in the dry or in the wet state.

One of the possibilities to crosslink gelatin nanofibers is based on the use of high-energetic light, i.e., UV irradiation. In this approach, inter- and intramolecular photodimerization techniques are used to control the crosslinking density [24]. For example, Ko et al. firstly prepared trans-cinnamic acid modified gelatin, used it for electrospinning from HFP with a needle-based technique on a rotating collector, and crosslinked these gelatin nanofibers by UV irradiation at 254 nm for different durations, before the unreacted gelatin was rinsed with water [24]. They found higher UV absorbance with increasing amount of cinnamoyl groups, with no absorbance of natural gelatin at the investigated wavelength of 270 nm. The crosslinking density also increased with increasing UV irradiation duration up to 3 h, while longer times did not show further crosslinking effects. However, comparison with genipin crosslinked gelatin nanofibers showed higher cell proliferation of the latter.

The most often used chemical crosslinking agents belong to the aldehydes. In many studies, glutaraldehyde is used to crosslink electrospun gelatin nanofibers, either as vapor or in fluid form [25][26][27][28][29]. On the one hand, GA is a very efficient crosslinking agent, as visible in Figure 2 [26]. On the other hand, glutaraldehyde is toxic, with highly problematic effects on the human health, such as chronic bronchitis and even possible genetic activity, reported in diverse studies [30][31][32]. Thus, different crosslinking chemicals are necessary, combining low-toxicity with efficient crosslinking. 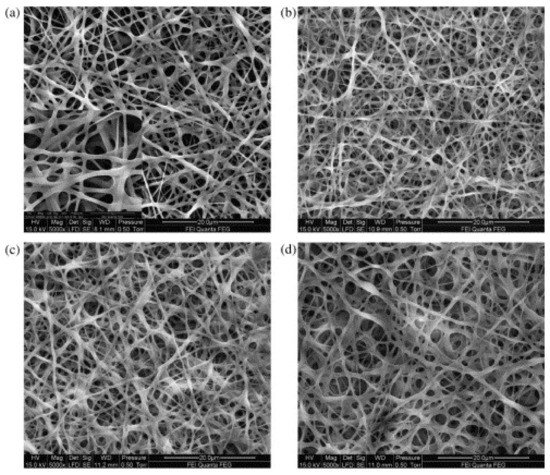 Figure 2. Crosslinked electrospun gelatin fibers: (a) before water-resistant test; immersed in 37 °C deionized water for (b) 2 days, (c) 4 days, and (d) 6 days (d). Reprinted from [26]. Copyright 2021 Elsevier.
Another crosslinking approach for gelatin nanofiber mats is based on the aforementioned EDC/NHS. The idea behind this combination is that EDC promotes isopeptide bonds between the amino acid chains in proteins in an aqueous solution, while NHS subsequently stabilizes the EDC-fixed proteins [12][33].

Enzymatic crosslinking of gelatin is most often performed by genipin [34][35][36] or microbial transglutaminase [37][38][39]. Both are not non-toxic, but they are briefly mentioned here as examples for enzymatic crosslinking. Genipin is a molecule extracted from the gardenia plant fruit, which crosslinks gelatin in a two-step process, firstly by building heterocyclic linking of genipin to an amine in gelatin, followed by a nucleophilic substitution of the ester group in genipin resulting in covalent crosslinks between the primary amine residues [35]. Microbial transglutaminase (MTG) is a transferase that is assumed to build covalent bonds between different polymer chains, resulting in a hydrogel network [39]. Other enzymes that have been used to crosslink biopolymers belong to the transferases, hydrolases, and oxidoreductases [39], and they have been scarcely investigated for their possible use with electrospun nanofiber mats.

6. Blending Gelatin with Other Polymers

As a last method to improve the mechanical strength and to reduce the water solubility of electrospun gelatin nanofiber mats, they can be blended with other polymers, in this way often retaining the positive properties of gelatin for tissue engineering in combination with the mechanical stability of the water-stable polymer.
One of the typical blend partners of gelatin is chitosan. Chitosan is derived from chitin by partial deacetylation, and it is, similar to gelatin, biocompatible, biodegradable, and antimicrobial [40]. Dhandayuthapani et al. prepared chitosan/gelatin blend nanofibers by electrospinning from TFA/dichloromethane solution and found significantly better tensile strength, in the range of normal human skin, for the blended nanofibers [41]. Similarly, Yin-Guibo et al. found improved mechanical properties for silk fibroin/gelatin blended electrospun nanofiber mats, as compared to both pure materials [42]. The solubility in water was not mentioned in these studies.

More
© Text is available under the terms and conditions of the Creative Commons Attribution (CC BY) license (http://creativecommons.org/licenses/by/4.0/)
Upload a video for this entry
Information
Subjects: Polymer Science
Contributor MDPI registered users' name will be linked to their SciProfiles pages. To register with us, please refer to https://encyclopedia.pub/register :
Andrea Ehrmann
View Times: 99
Revisions: 2 times (View History)
Update Time: 24 Jun 2021
Table of Contents
1000/1000
Hot Most Recent