Submitted Successfully!
Thank you for your contribution! You can also upload a video entry related to this topic through the link below:
https://encyclopedia.pub/user/video_add?id=11143
Check Note
2000/2000
Sorsby‘s Fundus Dystrophy
Edit
This entry is adapted from 10.3390/jcm10112433

Sorsby‘s fundus dystrophy (SFD) is a rare, autosomal dominant inherited retinal disease with complete penetrance affecting both genders similarly, typically becoming symptomatic after the second decade of life, with an average onset in the 4th to 5th decade of life, leading to severe bilateral vision loss and blindness if left untreated.

The pathophysiological mechanisms underlying Sorsby‘s fundus dystrophy have yet to be identified while it is known to be caused by mutations in the gene encoding tissue inhibitor of metalloproteinases-3 (TIMP3) [1]. TIMP3 regulates remodeling of the extracellular matrix by inhibiting metalloproteases (MMPs) and competes with VEGF in binding to its receptor VEGFR2, thereby inhibiting angiogenesis [2][3][4]. It is expressed by retinal pigment epithelium (RPE) cells and is an element of Bruch‘s membrane in healthy individuals. Altered structure and aggregation of the protein can lead to characteristic accumulations in Bruch’s membrane in SFD patients, resulting in Drusen-like deposits and thickening of the membrane [5][6]. What remains to be discovered is whether the accumulation of TIMP3 directly leads to disruption of Bruch‘s membrane, or indirectly, by the failure to inhibit MMP activity and VEGF-driven angiogenesis, resulting in the development of choroidal neovascularisation (CNV) or, due to the underlying pathophysiology more appropriately synonymously used, macular neovascularisation (MNV) [7][8].
SFD is characterised by the loss of central vision due to the development of a classical MNV (Figure 1a,b), and in the clinical course central geographic atrophy (Figure 2) [9]. Classical MNV was found to be a significant risk factor for a poor long-term prognosis in response to foveal scar formation in aged related macular degeneration [10]. Early symptoms in SFD include metamorphopsia, reduced colour vision, difficulties with dark adaptation and nyctalopia [11][12]. The typical clinical presentation of affected patients also includes drusen, reticular pseudodrusen and peripheral pseudodrusen. The hallmark of the angiogenic switch to macular neovascularisation is subretinal haemorrhage and exudation, whereas disciform macular scarring and central pigment epithelium atrophy represent the late stages (Figure 3) [12][13][14]. Progressive peripheral chorioretinal atrophy (Figure 4) and loss of ambulatory vision may be seen [9][12]. 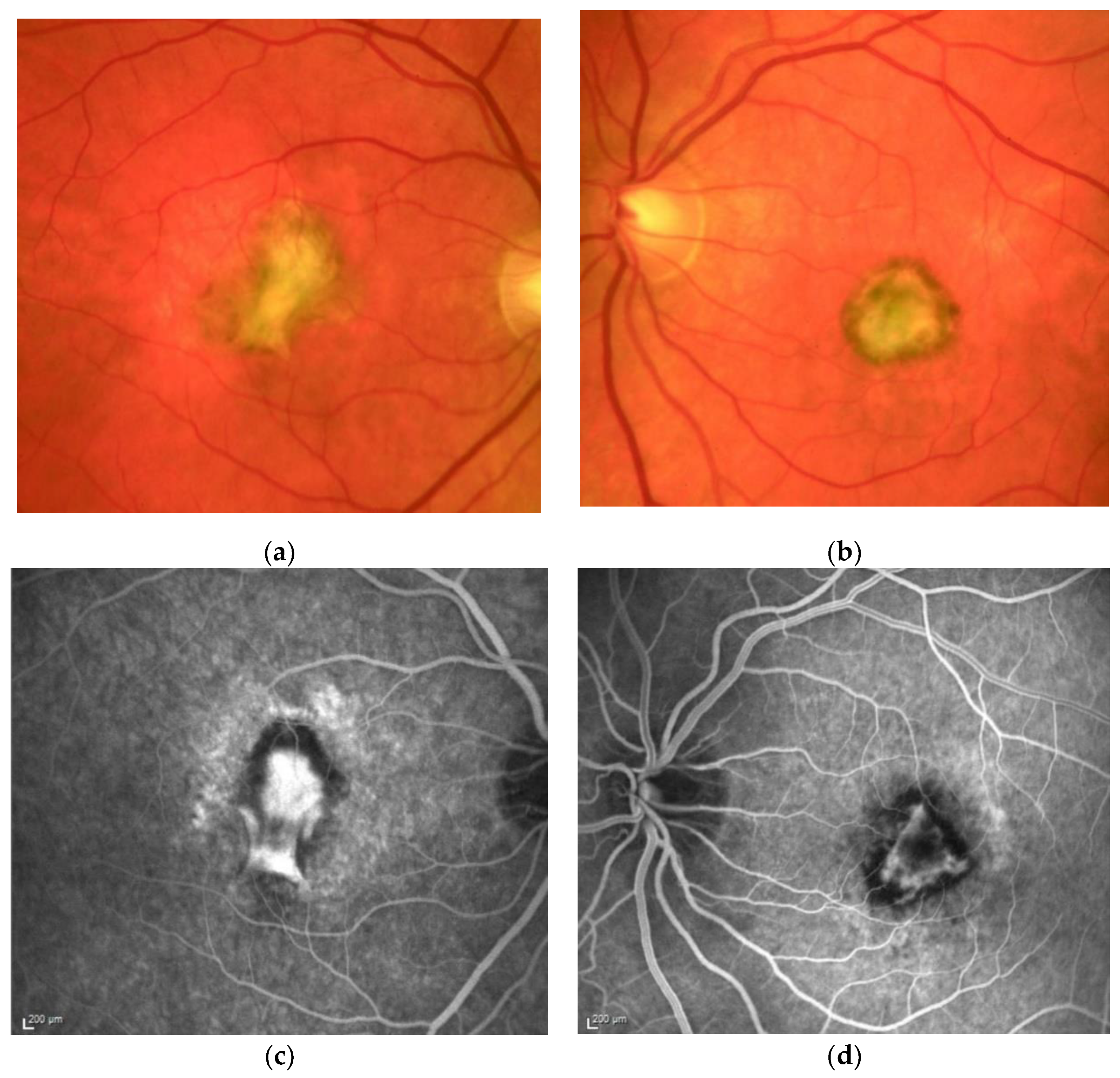 Figure 2. Same patient, 5 years later. First reactivation of macular neovascularisation evidenced by vision loss and a small macular hemorrhage as well as newly present intraretinal fluid in OCT in the right eye (a) and macular pigment atrophy in both eyes (a,b).

Figure 3. Same patient, 2016, 10 years after the start of intravitreal therapy; no lesion activity after 22 intravitreal Ranibizumab injections in the right eye (a) and a remarkable progressive macular atrophy despite a stable scar in his left eye (b). 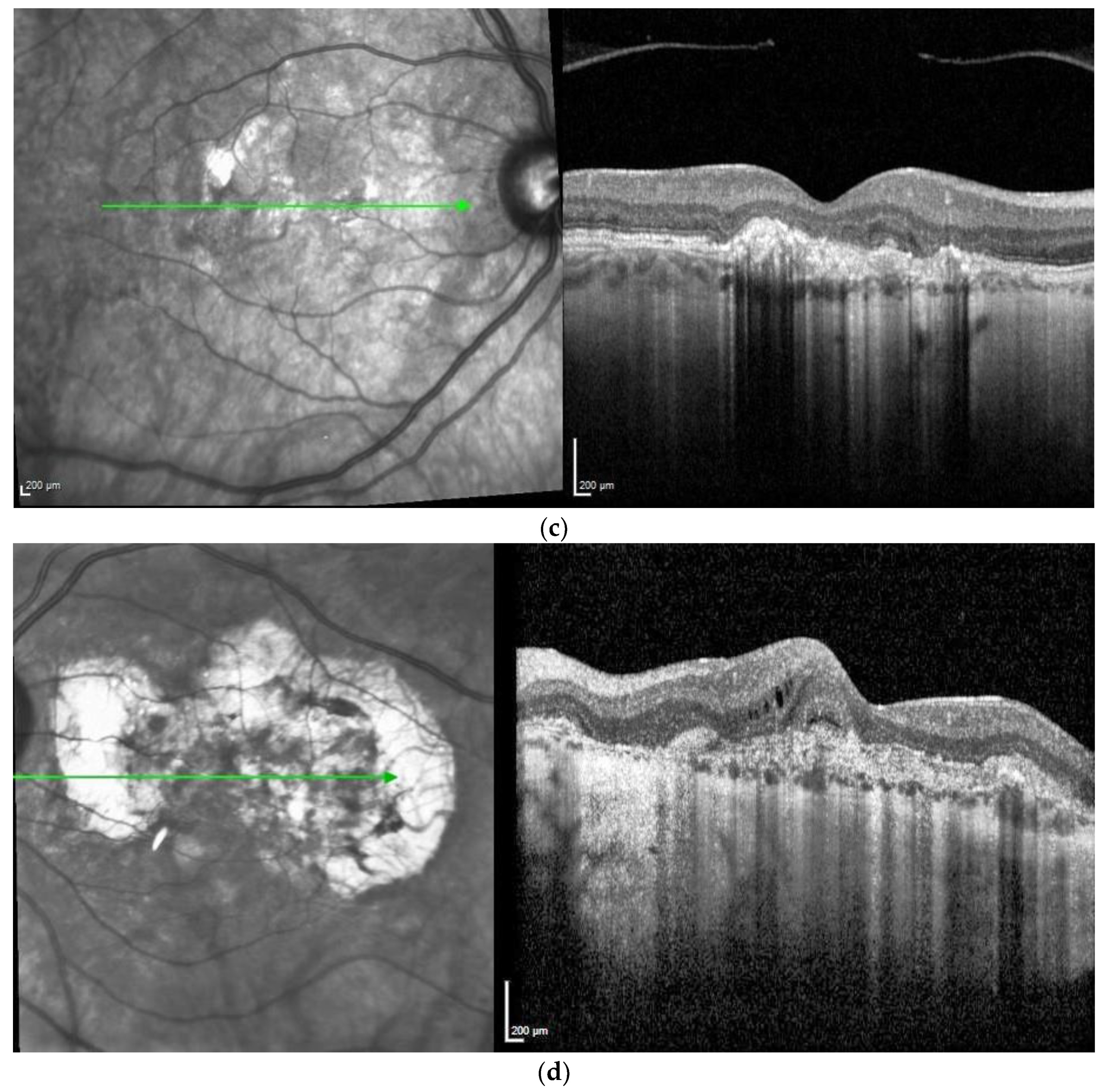 Figure 4. Same patient, 2021, meanwhile 51 years old. Eighteen years after diagnosis and 15 years after the start of intravitreal therapy visual acuity was maintained at Snellen 1.0 (20/20) in his right (a) and 0.16 (32/200) in his left eye (b), though reading and contrast-enhancing optical aids are required for near visual performance; no lesion activity after 24 intravitreal Ranibizumab injections in the right eye and a widely unchanged macular situation. Progressive macular scarring in both eyes. Upper panel: Clinical pictures of R + L eye (a,b), second panel, redfree picture and OCT of the right eye (c), bottom same, left eye (d). The arrows in redfree frames on the left side in Figure 4c,d indicate the location of the line scans on the right side.
The differential diagnosis in this relatively young population is mostly straight forward with a positive family history and includes other inherited macular dystrophies, presenting an age-related macular degeneration (AMD)-like morphology and secondary MNV pathologies, though these but rarely present bilateral [15]. As there is no causal therapy available, current symptomatic treatment has focused on the management of hemeralopia and neovascular complications. Vitamin A has been used, to some extent, to improve night blindness [1]. While lower doses lack efficacy, high doses increase the risk of hepatotoxicity [16]. The formation of MNV is the main cause of severe visual impairment. Thermal laser photocoagulation of MNV has failed to improve vision, but was found to induced frequent recurrences [9][17]. In the early 2000s, verteporfin became available and photodynamic therapy (PDT) was used to treat subfoveal MNV alone or combined with intravitreal corticosteroids. The effect of PDT on MNV activity was limited and not predictable [9][16][18][19][20][21][22][23]. Five years later, access to intravitreal anti-VEGF therapy provided a new treatment option for different types of MNV, including SFD. Until the advent of anti-VEGF drugs, SFD had a poor prognosis and eventually led to bilateral loss of central vision [9][13]; however, more than a decade later, several reports demonstrated promising long-term results preserving a meaningful VA. This compelled us to review the literature regarding long-term visual outcomes in patients with SFD since the advent of anti-VEGF treatment. We also added the experience of our own patient, who has been treated for the past 18 years in our clinic and retained a VA of 20/20 in his better eye.

A 51-year-old male presented at the age of 33 years with a first episode of simultaneous vision loss in both eyes in January 2004. He related a positive family history of SFD, as his father, uncle, as well as other first-degree relatives, had previously been diagnosed with SFD. Fluorescein angiography demonstrated a juxtafoveal, classical MNV in the right eye and a small, subfoveal, predominantly classic MNV in the left eye. Genetic testing revealed a mutation in the TIMP3 gene. Until January 2005, the patient received three and four sessions of full-fluence PDT using a standard dose (6mg) of verteporfin (Novartis Inc., Basel, Switzerland) in his right and left eye each, respectively, along with parabulbar triamcinolone injections. With treatment, a stable course in the right eye contrasted to repeated re-activations of the subretinal MNV in his left eye. Therefore, he received four intravitreal injections of crystalline triamcinolone (8mg) in his left eye in the following 15 months, accompanied by a rise of intraocular pressure and cataract formation. By that time, central vision in his left eye had dropped to Snellen 0.20 due to progressive macular scarring and pigment epitheliopathy in both eyes. After the introduction of intravitreal anti-VEGF therapy for exudative maculopathy, the patient received a total of nine injections of Ranibizumab (Ran; Lucentis®, Genentech, South San Francisco, CA, USA) to control disease activity in his left eye between 2007–2012. After lesion inactivity due to macular scarring had been observed over one year, intravitreal therapy was ceased at a central Snellen vision of 0.16.

In April 2011, the patient presented with a symptomatic MNV reactivation of his right eye and 0.5 mg Ranibizumab intravitreally was initiated and continued following a pro re nata (PRN) scheme. Since April 2011, a total of 24 Ranibizumab injections were administered to the right eye, with 22 of these administered up until July 2015. The last injection was administered in July 2019. During the last FU in February 2021, the patient had a best corrected Snellen VA of 1.0 in his right eye and 0.16 in his left eye. Though functional stability was achieved over the last 10 years, progression of severity and extension of RPE changes, Drusen formation and choroidal sclerosis was evident in both eyes (Figures 1, 2, 3 and 4). Nevertheless, with consequent clinical controls and Ranibizumab treatment immediately upon first signs of lesion reactivation, his quality of life is perceived as excellent, he can follow his daily professional and private activities without relevant restrictions.

Secondary MNV is the landmark for the breakdown of VA in SFD. With the introduction of intravitreal anti-VEGF therapy, this previously rapidly blinding disease [9] has, for the first time, found an unprecedented treatment that may preserve useful central vison over many years if initiated early, with 51% of eyes maintaining a reading and driving vision (≥0.5) and 67% of vision allowing reading with reading aids (≥0.2) [9][15][16][18][20][21][24][25][26][27][28][29]. Even under consequent treatment of neovascular activity, the underlying, so far only partially understood heredo-degenerative pathology may progress and result in central geographic atrophy and/or progressive night blindness, for both of which there is currently no treatment available. Fortunately, such progression has not been observed in our patient over the past 18 years (Figure 2, Figure 3 and Figure 4).
Central vision may be maintained as long as a central fibrovascular scar has not developed. In neovascular age related macular degeneration ani-VEGF therapy was found to delay scar formation [10]. A significant number of the published patients retained their central vision at least partially over four to seven years after occurrence of MNV, if anti-VEGF agents were administered shortly after occurrence of MNV. Sanz et al. estimated that the risk of significant visual loss may be reduced by 96% over 24 months, based on their case series of eight eyes if MNV was treated early with anti-VEGF drugs. In their series, 22.2% of treated eyes suffered a significant vision loss, compared to 100% of the eyes in the historical control group [30]. Kaye et al. reported a stabilization of VA with anti-VEGF treatment for MNV in five patients during the five-year observation period. They found, however, a linear annual decrease in VA of 0.1 logMAR units, with macular scar formation as the causative factor [31].
Before the availability of anti-VEGF drugs, treatment aimed at preserving some vision with a series of PDT and parabulbar or intravitreal triamcinolone that may stabilise small lesions as in the right, but not so in the left eye of our patient. The functional success of PDT, however, is unavoidably linked to a significant subretinal fibrovascular scar formation, which in the long term is accompanied by severe vision loss. Fortunately, disease remained quiet in the right eye of our patient over seven years. By then, anti-VEGF treatment had become available. This has allowed to maintain a full vision with a total of 24 intravitreal ranibizumab injections on a PRN basis over meanwhile ten years. Given the long periods of inactive MNV, the treatment burden remained supportable for this patient under a PRN regimen. Long times of inactivity of MNV are not unique, why a treatment following a treat-and-extend strategy in this generally relatively young population cannot generally be recommended.
Though our study is inherently limited by the paucity of retrospectively reported cases, this did not question the tremendous effect of early anti-VEGF therapy. The length of FU period in our and previously published cases proved the long-term efficacy of anti-VEGF treatment for MNV in SFD. Affected patients deserve to be correspondingly educated that there is a good chance to retain useful central vision, and to understand the importance of immediately consulting an ophthalmologist in case of visual irregularities, ideally before severe VA loss is encountered.
Though there exists, in conclusion, no cure for this heredo-degenerative disease, anti-VEGF treatment has dramatically changed the prognosis for patients with Sorsby’s fundus dystrophy. The visual function may be preserved in the vast majority for a significant period of the patients’ lives. More than half of the patients will maintain a driving and reading vision if macular neovascularisation is diagnosed and treated early.