Submitted Successfully!
Thank you for your contribution! You can also upload a video entry related to this topic through the link below:
https://encyclopedia.pub/user/video_add?id=10535
Check Note
2000/2000
Hybrid Materials Based on Polyhydroxyalkanoates
Edit
Upload a video
This entry is adapted from 10.3390/polym13111738

Polyhydroxyalkanoates (PHAs) constitute a family of biopolyesters that are synthesized and accumulate within the cellular structure of prokaryotic cells by bacteria, and they act as carbon and energy reserve materials under conditions of limited nutrient, such as nitrogen, oxygen, phosphorous or magnesium. As naturally derived materials, PHAs have been used for multiple cell and tissue engineering applications; however, their widespread biomedical applications are limited due to their lack of toughness, elasticity, hydrophilicity and bioactivity. To overcome this challenge combination of PHA with different polymers and inorganic materials are used to form hybrid composites with improved structural and functional properties.

Polyhydroxyalkanoates (PHAs) constitute a family of biopolyesters that are synthesized and accumulate within the cellular structure of prokaryotic cells by bacteria, and they act as carbon and energy reserve materials under conditions of limited nutrient, such as nitrogen, oxygen, phosphorous or magnesium. The carbon source is the main influencing factor for the PHA production at industrial scale, because it affects the cell growth, productivity, molecular mass, quality, and composition of a polymer [1][2]. There are published works, including review papers, addressing utilization of various types of carbon sources, such as whey, waste plant oils, waste animal fats, starch, wheat and rice bran, molasses, wastewater as a cheap carbon sources for PHA production [3][4][5][6].
PHAs are biodegradable, biocompatible, piezoelectric, and thermoplastic and show good barrier properties and controllable thermal and mechanical properties depending on the polymer composition [7][8].
Biocompatibility is the ability of a material to perform a desired function without causing any local or systemic adverse responses in the recipient of the material. The biological rejection of an implant leads to an inflammatory response mediated by immune cells, and it may require the removal of the implant. Although PHA has good biocompatibility [9][10], many authors have shown that hybrid materials based on PHA have greater biocompatibility with different cells [11][12][13][14][15][16][17].
The thermoplasticity, barrier properties and degradability characteristics of PHAs indicate that they can be recycled, which makes them very attractive for use as bioplastics for packaging purposes; however, the high cost of PHAs limits their use as a “green plastic”. In spite of this, interest in PHAs as bioplastics for fighting plastic pollution challenge continues to grow worldwide [18]. PHA production increased from 5.3 million tons to 17 million tons within the year 2013 to 2020 [19]. PHA market size is estimated to be USD 62 million in 2020 and is projected to reach USD 121 million by 2025, at a CAGR of 14.2% between 2020 and 2025 [20]. The market is mainly driven by the rising demand for PHA industries such as food and packaging services, agriculture, biomedical, and some others. Factors such as consumer awareness about the toxicity of the petroleum based and sustainable ecofriendly bioplastics will drive the PHA market. There are key markets for PHA, which are Europe, followed by North America and Asia, in terms of value and volume. With an objective to reduce the total cost of PHAs production, new approaches of utilization of different cheap and eco-friendly carbon sources are employed [21][22][23].
The nontoxicity, biodegradability and biocompatibility characteristics of PHAs suggest their potential uses in the biomedical field, especially in tissue engineering and as implants. Gradual biodegradation of PHA-based scaffolds creates a structure for the formation of new tissue and promotes cell growth; moreover, a second surgery is not required to remove the implant [9]. PHA applications include cardiovascular tissue engineering, bone tissue engineering, nerve tissue engineering, and drug delivery systems.
Only a few members of the PHA family are commercially available and produced on a large scale, including poly(3-hydroxybutyrate) (PHB), poly(3-hydroxybutyrate-co-3-hydroxyvalerate) (PHBV) and poly(3-hydroxybutyrate-co-3-hydroxyhexanoate) (PHBHHx). PHB is the most investigated member of the PHA family. PHB is piezoelectric, crystalline, water insoluble and relatively resistant to hydrolytic degradation; however, it reveals poor mechanical properties and is a highly brittle and stiff material [10]. The copolymer PHBV has better mechanical properties than PHB and is tougher, less stiff, and more flexible. PHBV exhibits both a lower crystallinity and melting temperature and increased elongation to break. PHBV copolymer does not cause inflammatory reactions when implanted in mice and rats [24]. PHBVs have also been shown to support in vitro osteogenesis, which makes them suitable for bone regeneration [25].
PHBHHx is another member of the PHA family with improved mechanical properties compared with both PHB and PHBV. PHBHHx promotes enhanced osteogenic differentiation of mesenchymal stem cells (MSCs) [26] and possesses good biocompatibility with fibroblasts, chondrocytes, nerve cells and osteoblasts compared with polylactic acid (PLA), PHB and PHBV [27].
PHB and PHBV are nontoxic because their degradation products are water, carbon dioxide and D-3-hydroxybutyric acid, which are natural constituents of human blood, and PHA-based biomaterials cause less-severe inflammatory reactions compared to other biopolymers, such as PLAs [28]. D-3-Hydroxybutyric acid increases calcium influx in cultured cells and suppresses their death [29]. Oligo(3-hydroxybutyrate-co-3-hydroxyhexanoate), oligo(3-hydroxybutyrate) and 3-hydroxybutyrate, the main degradation products of PHBHHx, are nontoxic and cause low inflammatory effects [30]. However, the application of PHAs is limited due to their weak mechanical and thermal properties, slow degradation rate, lack of bioactivity, and poor hydrophilic properties. To overcome these disadvantages and improve PHA properties and make it more suitable for biomedical applications, many hybrid PHA-based composites have been investigated [28][31][32][33][34][35]. Several reviews have been published describing production, properties, biocompatibility, and potential applications of pure PHAs [36][37][38][39][40]. Unfortunately, there is a lack of systematic and thorough overview addressing the performance of PHA hybrid materials for tissue engineering and biomedical applications.

2. The Most Important Properties of the Hybrids Based on PHAs

2.1. Wettability of the Composites 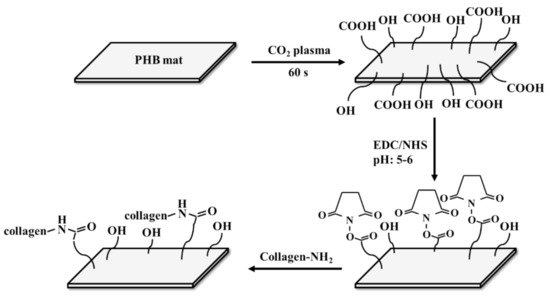 Figure 1. Schematic of the covalent coupling reaction for the attachment of protein to PHB fibers. Re-designed based on [13].
The hydrophobic character of PHAs can be altered to be hydrophilic with the addition of different materials, as shown in detail above. Hydrophilic surfaces provide attachment of cells to the surface of materials as well as cell spreading and proliferation. The addition of different fillers should not impair other important properties of materials, such as mechanical properties, biocompatibility, and biodegradability, which are necessary for their use in biomedicine. The physico-mechanical properties of the PHA-based hybrids will be discussed in the next section.

More
© Text is available under the terms and conditions of the Creative Commons Attribution (CC BY) license (http://creativecommons.org/licenses/by/4.0/)
Upload a video for this entry
Information
Subjects: Polymer Science
Contributor MDPI registered users' name will be linked to their SciProfiles pages. To register with us, please refer to https://encyclopedia.pub/register :
Pryadko Artyom
View Times: 88
Revisions: 2 times (View History)
Update Time: 07 Jun 2021
Table of Contents
1000/1000
Hot Most Recent