Lymph node structural organization is reported to be governed by the stromal cells. Fibroblast reticular cells (FRCs), a subset of the stromal cells found in the T lymphocyte region of lymph nodes (LNs) and other secondary lymphoid organs (SLOs), have been described as much more than structural cells.
FRCs are described to be organized in a conduit system called the “reticular fiber network”, responsible for transferring antigens from tissue to T cell zones in LNs and for controlling the conduit matrix deposition during lymph node expansion.

Fibroblastic reticular cells (FRCs), usually found and isolated from the T cell zone of lymph nodes, have recently been described as much more than simple structural cells. Originally, these cells were described to form a conduit system called the “reticular fiber network” and for being responsible for transferring the lymph fluid drained from tissues through afferent lymphatic vessels to the T cell zone. However, nowadays, these cells are described as being capable of secreting several cytokines and chemokines and possessing the ability to interfere with the immune response, improving it, and also controlling lymphocyte proliferation. Here, we performed a systematic review of the several methods employed to investigate the mechanisms used by fibroblastic reticular cells to control the immune response, as well as their ability in determining the fate of T cells. We searched articles indexed and published in the last five years, between 2016 and 2020, in PubMed, Scopus, and Cochrane, following the PRISMA guidelines. We found 175 articles published in the literature using our searching strategies, but only 24 articles fulfilled our inclusion criteria and are discussed here. Other articles important in the built knowledge of FRCs were included in the introduction and discussion. The studies selected for this review used different strategies in order to access the contribution of FRCs to different mechanisms involved in the immune response: 21% evaluated viral infection in this context, 13% used a model of autoimmunity, 8% used a model of GvHD or cancer, 4% used a model of Ischemic-reperfusion injury (IRI). Another four studies just targeted a particular signaling pathway, such as MHC II expression, FRC microvesicles, FRC secretion of IL-15, FRC network, or ablation of the lysophosphatidic acid (LPA)-producing ectoenzyme autotaxin. In conclusion, our review shows the strategies used by several studies to isolate and culture fibroblastic reticular cells, the models chosen by each one, and dissects their main findings and implications in homeostasis and disease.

Lymph node structural organization is reported to be governed by the stromal cells [1]. Fibroblast reticular cells (FRCs), a subset of the stromal cells found in the T lymphocyte region of lymph nodes (LNs) and other secondary lymphoid organs (SLOs), have been described as much more than structural cells [2].
FRCs are described to be organized in a conduit system called the “reticular fiber network”, responsible for transferring antigens from tissue to T cell zones in LNs and for controlling the conduit matrix deposition during lymph node expansion [3][4].
Their ability for cytokine and chemokine production has been demonstrated in several studies [2][5][6], and their relevant multifunctional roles and multiple subsets have been previously defined [7]. In addition, mice and human lymph node-derived FRC’s ability to react to inflammatory stimuli has been described [8][9][10].
Moreover, a few studies have implicated FRC in peripheral tolerance. Certain stromal cells can express antigens from peripheral tissues (PTA) and mediate the maintenance of peripheral tolerance through the deletion of self-reactive T cells and other mechanisms [11][12][13][14][15][16]. In addition, other cells previously known as structural cells, such as epithelium, endothelium, and fibroblasts, have also been implicated as players in the immune response [17].
However, there are several obscure points in FRC biology that need elucidation, mainly that of their dual role augmenting and, thereby, controlling the immune response. In this sense, this systematic review lists several FRC mechanisms described as controlling mechanisms of the immune response [18][19][20][21][22][23][24][25][26][27][28][29][30][31][32][33][34][35][36][37][38][39][40][41].
The articles reviewed here report on using several animal models of disease and/or genetically modified mice as tools to investigate FRCs’ effect on T cells. These articles also approach and clarify the mechanisms involved in T cell proliferation or differentiation in subsets with regulatory, effector, or memory profiles [18][19][20][21][22][23][24][25][26][27][28][29][30][31][32][33][34][35][36][37][38][39][40][41]. In addition, these articles reported the markers used to identify and isolate FRCs, as well as the methods used for these cells’ cultivation.
Lately, FRCs’ ability for controlling the immune response and its role in several pathological conditions, such as viral infection, inflammation, metastatic cancer, and autoimmunity, are also included in this review. Consequently, we comprise here the latest updates in FRC biology, their impact on T cell fate, how they participate in diseases, and how they could be manipulated in order to ameliorate the course of certain conditions.

FRC is a specific subset of stromal cells present in the lymph node, and they are precisely located in the T cell zone. There are other stromal cell subsets in lymph nodes, described as double-negative cells, follicular dendritic cells, blood endothelial cells, lymphatic endothelial cells, and others that are not discussed in this review [42]. The results of this review firstly show the characteristics of the host type used for analyzing FRC function. All these variations between the models studied, cell origins, and characterization, sometimes lead to different conclusions, making the comparison between studies difficult or conflicting, such as the role of FRCs in T cell proliferation, sometimes described as stimulators and, at other times, as limiting. Next, we assembled the studies with the same subject and compared them, trying to show the differences and, more importantly, comparisons between the achieved results (Figure 1). 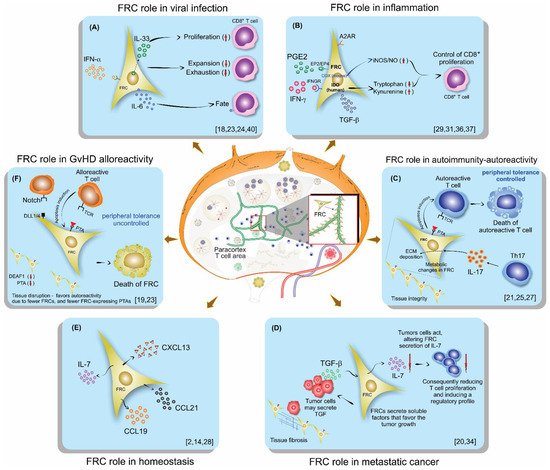 More
© Text is available under the terms and conditions of the Creative Commons Attribution (CC BY) license (http://creativecommons.org/licenses/by/4.0/)
Upload a video for this entry
Information
Subjects: Microbiology
Contributor MDPI registered users' name will be linked to their SciProfiles pages. To register with us, please refer to https://encyclopedia.pub/register :
Luciana Marti
View Times: 62
Revisions: 11 times (View History)
Update Time: 04 Aug 2021
Table of Contents
1000/1000
Hot Most Recent