Submitted Successfully!
Thank you for your contribution! You can also upload a video entry related to this topic through the link below:
https://encyclopedia.pub/user/video_add?id=10098
Check Note
2000/2000
Salt Sensation
Edit
Upload a video
This entry is adapted from 10.3390/metabo11030175

Taste sensation and regulation are highly conserved in insects and mammals. Research conducted over recent decades has yielded major advances in our understanding of the molecular mechanisms underlying the taste sensors for a variety of taste sensations and the processes underlying the regulation of ingestion depending on our internal state. Salt (NaCl) is an essential ingested nutrient. The regulation of internal sodium concentrations for physiological processes, including neuronal activity, fluid volume, acid-base balance, and muscle contraction, are extremely important issues in animal health. Both mammals and flies detect low and high NaCl concentrations as attractive and aversive tastants, respectively. These attractive or aversive behaviors can be modulated by the internal nutrient state. However, the differential encoding of the tastes underlying low and high salt concentrations in the brain remains unclear.

In addition to being one of the five basic senses, the taste is also one of the two chemosensations, along with smell [1]. All life forms strive to consume integral nutrients and to steer clear of potential toxic supplements based on their unattractive taste. As an attempt to survive, numerous animals have developed chemoreceptors to determine deleterious chemicals by contact [2].
Both mammals and Drosophila melanogaster show mechanisms for coding the taste of salt. Salt is fundamental for the proper functioning of many physiological processes, including electrolyte homeostasis, muscle contraction, neuronal activity, and nutrient absorption. Although salt is key for the survival of mammals, excessive amounts of salt may cause hypertension and are therefore detrimental. Salt is perceived differently depending on the concentration and is usually attractive below 100 mM and aversive above (the aversiveness intensifies as the concentration increases above this threshold) [3][4][5]. Drosophila is an influential model for functional analysis of the neuronal circuits behind behaviors. Although cardiovascular diseases, abnormal blood pressure, stroke, and hypertension resulting in death are highlight prevalent conditions associated with elevated levels of salt consumption [6], the actual cellular and molecular mechanisms in peripheral tissues and the brain by which high/low salt concentrations are encoded or recognized remain unclear, as is the effect of salt intake on consumption behavior. This review focuses on the studies of Drosophila melanogaster to determine the regulation of salt-sensing neurons in the brain and the effect of salt on physiological functions such as feeding behavior in mammals. The invaluable information obtained in these investigations will improve our understanding of the previously mentioned human diseases. Since all higher animals share innumerable functional and anatomical features of taste transduction, studies in Drosophila and mammals may also address our questions regarding sensory coding. Here, we present a critical and reliable examination of recent literature about salt sensation and regulation in mammals and Drosophila along with professional comment on prospective advancements.

Taste buds, which are ovoid structures composed of 50–100 taste receptor cells (TRCs), are located in the tongue and palate epithelium. Circumvallate and foliate papillae contain dense groupings of taste buds at the back or sides of the tongue, respectively, whereas fungiform papillae contain scattered taste buds at the front of the tongue (Figure 1A) [4][7]. TRCs are neuroepithelial cells innervated by pseudounipolar neurons whose cell bodies are located at the petrosal and geniculate ganglia (Figure 1B) [7]. Three morphologically distinct types of cells (I, II, and III) are present in a taste bud and constitute five functional classes of sensory cells, each specialized to detect at least one of the five basic taste qualities, namely, sweet, umami, bitter, salty, and sour (Figure 1C). Type I TRCs are glial-like cells and were earlier proposed to transduce an attractive salty taste [8][9] Type II TRCs express T1R or T2R receptors. Sweet and umami taste receptors are heterodimers of T1R2 + T1R3 and T1R1 + T1R3, respectively [10][11][12]. Bitter taste is mediated by T2Rs [7][13][14][15]. Type III TRCs express otopetrin, a proton channel mediating sour taste [16][17][18]. Type III TRCs also express PKD2L1 and carbonic anhydrase 4 [19][20][21]. However, the cell type associated with the perception of salty taste is controversial, because a recent study reported that sodium-taste cells can be considered as a Type II cell subset [9]. The salty Type II TRCs are distinct from sweet-, umami-, and bitter-sensing Type II TRCs and are characterized by the absence of Trpm5 and the presence of ENaCα. The cells dedicated to attractive sodium taste are positive for ENaC and CALHM1/3 [8]. 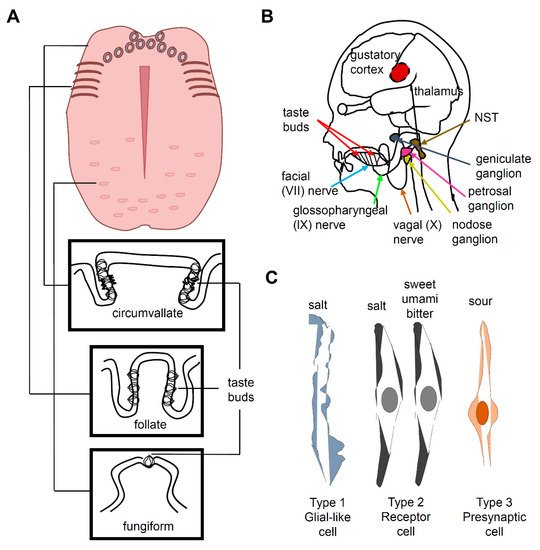 Figure 1. Taste perception in mammals. (A) Structure of a human tongue and the taste buds housing fungiform, folate, and circumvallate taste receptor cells (TRCs). (B) The neural pathway for human taste. The taste buds on the tongue and pharynx send gustatory information to the geniculate ganglion via the facial nerve VII, the petrosal ganglion via the glossopharyngeal nerve, and the nodose ganglion via the vagal nerve. This taste information is further transmitted to the thalamus and gustatory cortex via the nucleus of the solitary tract (NST) in the medulla oblongata. (C) Three morphologically distinct cell types (I, II, and III) are present in a taste bud and constitute five functional classes of sensory cells, each specialized to detect at least one of the five basic taste qualities. Type I TRCs are glial-like cells and earlier proposed to transduce an attractive salty taste, although it is controversial. Type II TRCs express T1R or T2R receptors and mediate the detection of sweet, umami, and bitter compounds. Distinct Type II TRCs from the sweet, umami and bitter-sensing TRCs are salt sensitive. Type III TRCs, which are presynaptic cells, express otopetrin, a proton channel for sour taste.
Most of the taste-related information is transmitted via the facial nerve (VII) and the glossopharyngeal nerve (IX) (Figure 1B). The chorda tympani is a branch of the facial nerve that transmits taste messages from the anterior region of the tongue, which contains the fungiform papillae. The taste messages from the circumvallate papillae are transmitted via the glossopharyngeal nerve to the nucleus of the solitary tract (NST) in the medulla oblongata, while the foliate papillae send information via both VII and IX cranial nerves [22][23][24]. When the superficial petrosal and glossopharyngeal nerves are abolished, the chorda tympani nerve occupies the space in the terminal field, which indicates that these two nerves compete or prune axon terminals to occupy the terminal space during development [25]. The taste information in the NST passes to the thalamus, which projects to the cerebral cortex. The taste message is stored in the primary gustatory cortex in the insula and transported to the somatosensory cortex of the postcentral gyrus specifically dedicated to the tongue. This message is also carried to the prefrontal cortex, which coordinates taste association and perception of flavor.
Salt responses are recorded from the chorda tympani nerve [18]. Depending on salt concentration, animals have two distinctive behaviors that are well reported in rodents: attraction (<100 mM) and aversion (>300 mM). At low concentrations, mice consume salt, but their behavior and neural responses are largely blocked by amiloride [26]. In contrast, at high concentrations of salt, mice exhibit innate aversion, and these responses are unaffected by amiloride. Thus, a low concentration of salt is sensitive and a high concentration of salt is insensitive to the diuretic amiloride [27]. Because epithelial Na+ channels (ENaCs) are specifically inhibited by amiloride, they have been proposed to participate in low-concentration salt taste [27][28]. ENaCs are non-voltage-gated and constitutively active channels that are highly selective of Na+ and Li+ over other monovalent cations such as K+ [27]. An ENaC is composed of three subunits [29], all of which are expressed in a small number of unique taste cells, with some being uncategorized TRCs [3]. In humans, the salt taste is amiloride-insensitive [30]. In addition to α, β, and γ ENaC subunits, humans express an additional δ ENaC subunit [31]. Heterologous expression of fully functional human α ENaC and δ ENaC was achieved in Xenopus oocytes [31][32][33]. This may provide evidence that ENaC functions in salt sensation. Therefore, further studies are required to identify evolutionary changes in α, β, γ ENaCs in humans. ENaCs also play a major role in body fluid and blood pressure regulation [34]. The δ-ENaC is also expressed in the brain, pancreas, testis, and ovary. Therefore, it is interesting to find any other roles of ENaC in different organs. Amiloride-insensitive high-salt transduction constitutes ~80% of the high-salt responses recorded in the chorda tympani nerve in mice [35]. Furthermore, amiloride-insensitive high-salt responses are detected in type II TRCs, but not in type III TRCs in the fungiform papillae [36]. In type II TRCs, the salt response is highly dependent on the presence of Cl-, which is called “anion effect,” and involves the use of internal Ca2+ stores, whereas type III TRCs utilize voltage-gated Ca2+ channels activated by external Ca2+. Cl−, not Na+, plays a major role in the amiloride-insensitive high-salt responses [36], but the contribution of the cation remains unclear. In the circumvallate papilla, the amiloride-insensitive high salt response is mediated in type III TRCs through either an anion-selective or osmolality-sensitive channel [30][37]. Recent studies in the field of salt sensation have shown substantial progress in our understanding of the effects of low and high salt concentrations on peripheral responses in the tongue. Therefore, future studies in this regard should be focused on determining how excessive salt intake and hypertension can be avoided using the salt taste sensation.

The taste system in adult insects spreads throughout the body and includes the mouth, legs, wings, and ovipositor, where taste sensilla are located, although it is mainly distributed in the head region during the larval stage (Figure 2A) [38][39]. The mouth part is composed of the external organ, the labellum, and the internal organ, the pharynx (Figure 2B). The 31 taste sensilla in the labellum are classified into long (L), intermediate (I), and short (S) bristles, depending on their length. Each sensillum contains 2–4 gustatory receptor neurons (GRNs). 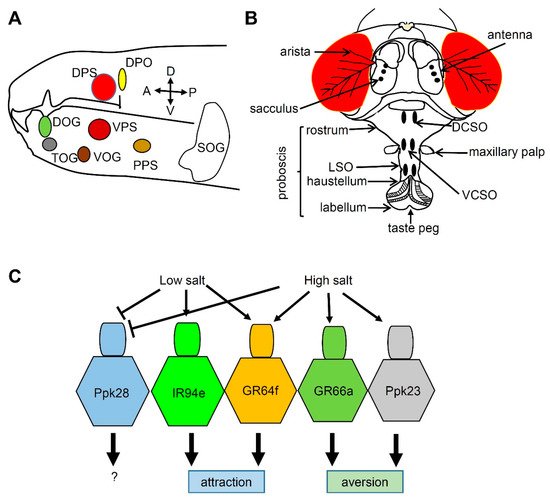 More
© Text is available under the terms and conditions of the Creative Commons Attribution (CC BY) license (http://creativecommons.org/licenses/by/4.0/)
Upload a video for this entry
Information
Subjects: Biology
Contributor MDPI registered users' name will be linked to their SciProfiles pages. To register with us, please refer to https://encyclopedia.pub/register :
Sonali Puri
View Times: 126
Revisions: 3 times (View History)
Update Time: 11 Oct 2021
Table of Contents
1000/1000
Hot Most Recent