Submitted Successfully!
Thank you for your contribution! You can also upload a video entry related to this topic through the link below:
https://encyclopedia.pub/user/video_add?id=10012
Check Note
2000/2000
PET-RAFT
Edit
Upload a video
This entry is adapted from 10.3390/polym13071119

Photoinduced Electron/Energy Transfer Reversible Addition-Fragmentation Chain-Transfer (PET-RAFT) polymerization, proposed for the first time in 2014, is based on an alternative activation of the thiocarbonylthio compounds through photoredox catalysts (PCs). This last presents significant advantages compared to other photochemical techniques in terms of applicability, cost, and sustainability.

The introduction of reversible-deactivation radical polymerizations (RDRP) to the scientific community has provided relevant improvements over the classical radical polymerization technique thanks to the “living character” of this method. RDRP are based on the equilibrium between (macro) propagating radicals and dormant species through an activation/deactivation equilibrium [1]. The living chains spend most of their polymerization time in a dormant state and this allows to reach low dispersity (Đ), higher control over the molecular weight, and the possibility to continue the polymerization with fresh monomers in order to obtain complex architectures [2] (i.e., block, star, branched or hyper-branched network). RDRP is a collective term that embraces processes such as nitroxide-mediate polymerization (NMP) [3], atom transfer radical polymerization (ATRP) [4], and reversible addition-fragmentation chain-transfer polymerization (RAFT). In particular, RAFT follows a degenerative transfer mechanism in which there is no change in the overall number of radicals during the polymerization and it requires an external source of radicals, typically a radical initiator.

RAFT polymerization can be defined as one the most versatile of RDRP methods allowing the synthesis of complex architecture for a wide variety of functional monomers in different reaction conditions (aqueous or organic solution, bulk, dispersion, emulsion, miniemulsion) [5][6]. The overall process (Figure 1) can be viewed as the insertion of monomer units between the S–R bond of the RAFT agent.  The key features of the well-known RAFT polymerization mechanism [5][7][8] is the sequence of addition-fragmentation equilibrium shown in Figure 2.

Figure 1. Chemical structure of the RAFT agent and the overall insertion product of the reversible-addition chain transfer polymerization. 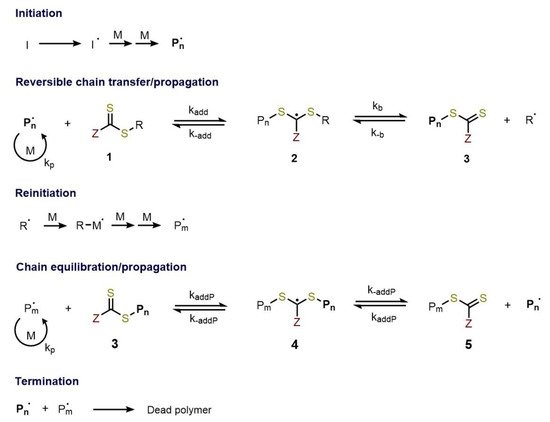 Notwithstanding RAFT mechanism is well understood, the interaction between the excited photoredox catalyst (PC*) and the RAFT agent has not yet been well investigated. Two are nowadays the proposed mechanism [9][10] as shown in Figure 3. 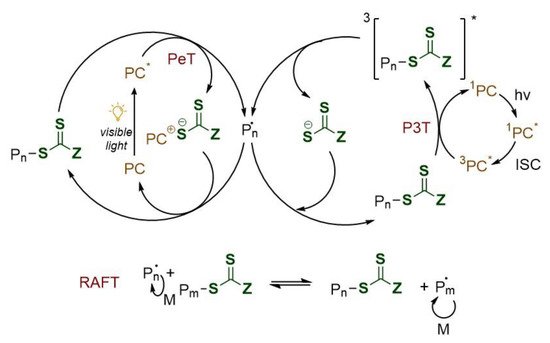 The introduction of photoredox catalysts to initiate the polymerization has different advantages with respect to thermal initiated RAFT. Electromagnetic radiation guarantees spatiotemporal control and polymerization rate can be tuned by modulation of light intensity and wavelength. Furthermore, the reaction can be performed at room temperature and in presence of molecular oxygen. Finally, a very low amount of catalyst is needed (ppm range) in comparison with common thermal initiators concentration. In the following years, a wide variety of photocatalysts for PET-RAFT polymerization was studied (Figure 4) including naturally derived photoactive compounds or metal-free organic catalysts moving toward greener polymer manufacturing. Table 1 the main advantages and disadvantages of the most used catalysts are reported. 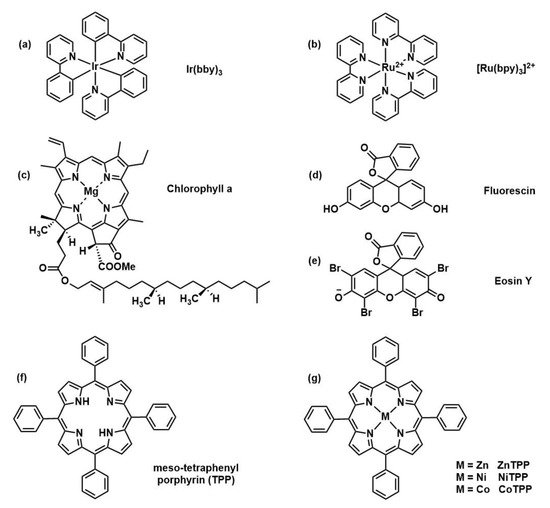 Table 1. Main advantaged and disadvantages of the most representatives photoredox catalysts.

In principle, all the external light sources on the market are suitable for mediating photochemical reactions, including xenon, fluorescent lamps, mercury, halogen, LEDs, or even sunlight. Among them, light-emitting diodes (LEDs) have become dominant in photochemistry in the new millennium thanks to numerous advantages (Figure 5). LEDs are based on electroluminescent emission, leading to a very precise emission wavelength with a narrow half width [22], which is pivotal for efficient polymerization. Very low voltage is required to power the lamp, which brings to less consumption of electricity, and less heat produced by the single compact LED units which may eliminate the need of heatsink or more complex equipment [23]. 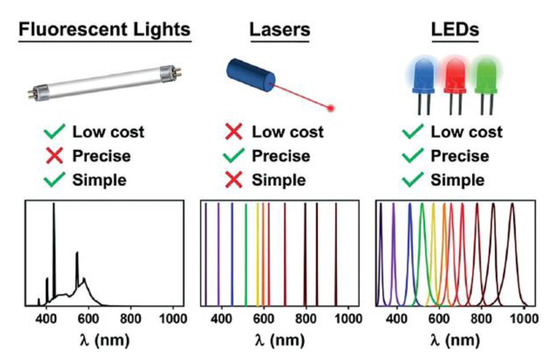 over the past few years removal and recycle of the PC has become a hot topic for the scientific community (Figure 7). For example, the use of catalysts anchored to solid support rather than in solution guarantees easy removal and recycle. Some relevant examples can be found in literature such as the use of celluloses as the supporting materials for the immobilization of ZnTPP [25][26] using simple grafting chemistry. 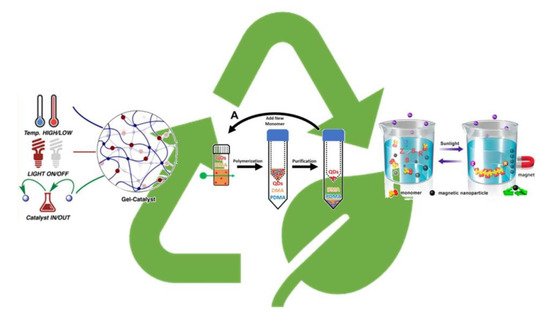 sually, in radical polymerization, to avoid termination reactions caused by the presence of oxygen, the reaction mixture is degassed (freeze-pump-thaw cycles) in sealed reactors and polymerization is conducted under an inert atmosphere (nitrogen or argon). Even if those methods are effective, they require time, inherently expensive gases, and complex equipment. PET-RAFT polymerization is a valuable alternative that can solve the problem in terms of applicability, cost, and sustainability.

An important concept of green chemistry relies on atom economy, meaning the ability of minimizing by-products, thus the reaction waste. Low by-products formation is possible using selective techniques, a feature that can be granted by the employment of photoredox catalysts. In fact, the electron transfer from the PC during irradiation is selectively accepted by the chain transfer agent, initiating the controlled polymerization. Moreover, light sources as LED [22], with narrow half width and low energy consumption, are safe and the visible radiation avoid the side reaction characteristic of high-energy UV or γ radiations such as the degradation of the CTA [30][31]. The direct generation of radical using the PC avoids the addition of exogenous radical sources which can give unwanted α or ω termini [32], dead chains polymers that remains as impurity in the synthesis of more complex architectures. Finally, the photocatalyst amount used on PET-RAFT remains in the ppm range and, as cited before, PCs recyclability is an hot topic in recent years. All these are interesting features which follow the green chemistry guidelines minimizing by-products formation.

Polymer science is nowadays pivotal for everyday life, thus covers a large portion of the actual market. One of the main challenges in polymer science is the development of new advanced materials with precise properties for multidisciplinary fields such as biotechnology, medical science, formulation chemistry, composite materials, microelectronics, plastic solar cells, biosensors, packaging, and so on. In this regard, photochemistry is a promising tool for developing innovative strategies appealing to both academic and industrial environments. The combination of photochemistry and RDRP provides good reaction control and does simplify elaborate reaction protocols. PET-RAFT polymerization is a valuable alternative and can solve the problem in terms of applicability, cost, and sustainability. Besides, the process is fully scalable thanks to the similarity with the traditional radical polymerization.

More
© Text is available under the terms and conditions of the Creative Commons Attribution (CC BY) license (http://creativecommons.org/licenses/by/4.0/)
Upload a video for this entry
Information
Subjects: Polymer Science
Contributor MDPI registered users' name will be linked to their SciProfiles pages. To register with us, please refer to https://encyclopedia.pub/register :
Valentina Bellotti
View Times: 389
Revisions: 2 times (View History)
Update Time: 26 May 2021
Table of Contents
1000/1000
Hot Most Recent