Worldwide, the pollution of water bodies by contaminants of emerging concern (CECs) such as pharmaceuticals, endocrine disrupting compounds, flame retardants including brominated flame retardants (BFRs) and perfluorochemicals (PFCs), microplastics, nanomaterials, and algal toxins, to name just a few, is creating a new set of challenges to the conventional wastewater treatment facilities, which demonstrate inefficiency in removing/degrading many CECs. As a consequence, environmentalists started to detect the presence of some of those contaminants at alarming levels in certain countries, with possible negative effects on aquatic species and often increased potential for human health risks through exposure to the contaminated waters, or the reuse of treated wastewater in agriculture and household use. Such issues are more accentuated in the African continent due to various socio-economic problems giving rise to poor sanitation systems and serious shortages in wastewater treatment plants in many regions, making it difficult to tackle the problem of conventional pollutants, let alone to deal with the more challenging CECs. Thus, in order to effectively deal with this emerging environmental threat, African researchers are working to develop and optimize sound sampling and analytical procedures, risk assessment models, and efficient remediation technologies.

Contaminants of emerging concern (CECs) are a cluster of chemical compounds that are potentially harmful to the environment and possibly to humans (through inherent toxicity or a recalcitrant and persistent nature).  CECs are currently an unregulated class of contaminants with increasing global presence and awareness [1][2].

Officially, EPA listed twelve CECs that are monitored closely: Trichloropropane (TCP), Dioxane, Trinitrotoluene (TNT), Dinitrotoluene, Hexahydro-trinitro-triazane (RDX), N-nitroso-dimethylamine (NDMA), Perchlorate, Polybrominated biphenyls (PBBs), Tungsten, Polybrominated diphenyl ethers (PBDEs) and Nanomaterials [1]. However, in the last decades, other CECs such as human and animal pharmaceuticals, endocrine disrupting compounds (EDCs), pharmaceuticals and personal care products (PPCPs), microplastics, nanomaterials etc, has come into the spotlight. Consequently, there has been a large increase in scientific studies on the pollution of aquatic ecosystems by CECs, and most notably pharmaceutical drugs and their derivates [3][4][5].

Table 2. Global occurrence of CECs and their use in the industry. (table adapted with permission from [6].

CECs are found globally in surface waters and wastewater treatment plants (WWTPs)[6]. The summarised table above. Various CECs could be found globally in various waterways, with the majority of the reported occurrence of CEC found in water treatment effleunts. It was reported that conventional and outdated wastewater treatment plants (WWTPs) were one of the main sources of pollution with CECs [7][8]. Current use of activated sludge-based WWTPs [9][10] and even more advanced membrane bioreactor systems were reported to be ineffective in the degradation of CECs.

Due to the increasing global occurrence of CECs, research studies began to be carried out to analyze the fate and ecotoxicology of many CECs in wastewater and aquatic environments [11][12]. In this regard, endocrine disrupting compounds (EDCs) are among the most investigated CECs. Indeed, their presence in the environment, raw sewage, treated sewage effluents, receiving rivers, and surface waters [13] constitute a serious menace due to the possible interference with the normal function of the endocrine systems of wildlife and humans, directly through exposure or indirectly via the food chain [14].

In this context, it was also noted that the majority of the related research studies are concentrated in North American, European and selected Asian countries and that this topic is still absent in the majority of African countries and relatively new in a few of them, with most research studies still in the early stages of assessing the occurrence and, to a lesser extent, the fate of CECs in WWTPs and receiving water bodies [15].

3. Risk Assessment and Impacts of Waterborne CECs on the Environment and Human Health

For many decades, CECs have been entering aquatic environments regularly through discharged WWTP effluents, industrial wastewaters, agricultural runoff, and municipal landfill leachates. Consequently, aquatic species (fauna and flora) are being continuously exposed to these contaminants of emerging concern, especially organisms that can bio-concentrate and bio-accumulate significant amounts of these CECs to concentrations several times higher than in the water body they live in [16][17].

Globally, several assessment studies conducted in Europe, North America and China emphasized the adverse impacts of a wide range of CECs on the environment, especially aquatic ecosystems. EDCs and many pharmaceuticals, which are environmentally persistent and bioaccumulating compounds, have great potential environmental risks when reaching drinking water supplies or through the food chain [18][19][20].

For instance, it was revealed that exposure to diclofenac, an NSAID drug, led to the near-extinction of vultures in the Indian subcontinent. The cause was that the birds were feeding on the carcasses of cattle treated with this drug [21]. In aquatic ecosystems, diclofenac, which is widely detected in African wastewater effluents [22][23], is suspected to cause damage to the inner organs in many fish species [24][25] and sharp declines in the populations of certain fish species due to the feminization of male fish [26]. The same adverse phenomenon, along with reduced fecundity, was also reported for fish species exposed to metformin, an anti-diabetes drug [27]. Such proven adverse eco-toxicological effects on local fish populations provide strong reasons for African researchers to examine such CECs-related issues, especially in African regions with poor sanitation systems or in densely populated areas.

Regarding the assessment of CECs’ impacts on the aquatic environment in Africa, interesting studies, although few in number compared to the ones conducted in other continents, presented valuable results. In South Africa, a research team from the University of the Western Cape, Cape Town, investigated the impact of this issue by attempting to accurately analyze the concentrations of fifteen CECs (pharmaceuticals and personal care products (PPCP), perfluoroalkyl and endocrine-disrupting compounds) in different fish samples [28]. The contaminants were selected according to their high annual consumption, their stability and poor elimination during wastewater treatment, along with concerns about adverse effects on human and aquatic organisms. The results revealed that perfluorodecanoic acid (20.1–179.2 ng/g), perfluorononanoic acid (21.2–114.0 ng/g), and perfluoroheptanoic acid (40.1–138.3 ng/g) were the most predominant among the perfluorinated compounds. Moreover, diclofenac was reported to have the highest concentration in the investigated edible fish species out of all the pharmaceuticals detected (551.8–1812 ng/g). As for the risk assessment, the authors reported values above 0.5 and 1.0, respectively, for acute and chronic risk, thus highlighting high health risks to the pelagic fish, aquatic organisms and humans via the food chain.

In Nigeria, a research study published in 2020 investigated the distribution and bioaccumulation issues EDCs in Lagos Lagoon as the final sink accumulating and transporting numerous chemicals such as octylphenol (OP), nonylphenol (NP) and BPA [30]. In this study, water and sediment samples were collected at nine locations on the lagoon, along with five different species of fish. It was observed that BPA was not detected in all the collected water samples. However, the concentrations of NP and OP reached up to 102 ng/L and 127 ng/L, respectively. In the sediment samples, the EDCs were substantially detected at concentrations reaching up to 5.1 μg/g for BPA, 1.9 μg/g for NP, and 2.5 μg/g for OP. In the fish samples, the highest concentrations were reported at around 1139 ng/g for BPA, 476 ng/g for NP, and 643 ng/g for OP. Such results confirm the bioaccumulation character of the studied EDCs in the Lagos lagoon biota, which can have detrimental effects on other organisms across the food chain.

Globally, many researchers paid special attention to emerging risks associated with natural and synthetic steroid hormones related to their endocrine-disrupting activities observed in receiving surface waters [31][32]. In a related joint South African and Canadian study, the estrogenicity and anti-estrogenicity of EDCs in WWTPs’ influents and effluents were assessed using recombinant yeast estrogen receptor binding assays [33]. Thus, seasonal and daily variations were monitored at ten South African WWTPs, as well as the river streams located upstream and downstream of the WWTWs. This comparative analysis was carried out with the objective of assessing potential adverse health risks associated with the measured estrogenic concentrations.

Furthermore, the influence of compounds that may antagonize estrogen-mediated receptor binding (anti-estrogens) in the bioassay was also investigated to further elucidate potential endocrine-disrupting risks that WWTP effluents might pose on receiving surface waters. The main results revealed that despite the fact that WWTPs managed to substantially reduce this EDCs menace (Cf. Figure 1), the abatement efficiencies tended to vary from one season to another and from a set of locations to another. 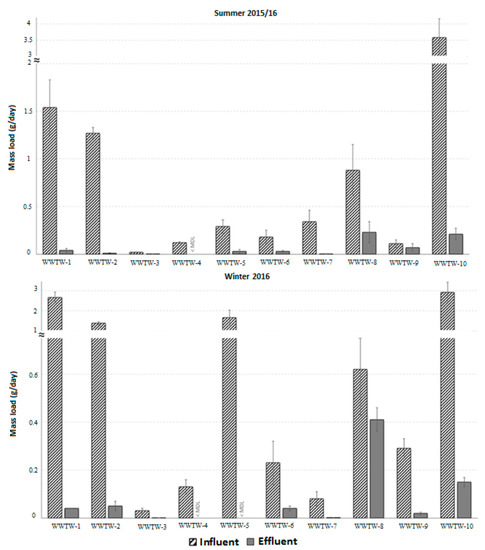 The reported reasons for such variations were higher weekday/weekend variations for WWTPs receiving wastewater from domestic sources and the amount of estrogenic EDC loads being directly influenced by the ongoing connection of more households to the sewage systems. In terms of season, the variations are linked to the differences in the influx of wastewater at the WWTPs, variable rainfall, and large runoff surges. The study also showed that concentrations in some treated effluent and river water samples were above effect-based trigger values, thus posing an endocrine-disrupting risk.

The efficiency of contaminants of emerging concern removal depends on the treatment methods and the chemical characteristics of each contaminant, as well as the characteristics of the wastewater treatment plants. Several pharmaceuticals are not removed from wastewater during the treatment processes. This inefficiency depends on the wastewater treatment plant’s design, and can also be associated with the desorption phenomenon of CECs from the particulate matter during the treatment process. Other processes may take place during treatment, such as biotransformation/biodegradation, and abiotic elimination by adsorption to the sludge.

For instance, for the case of pharmaceuticals, it was reported that several factors including physico-chemical properties of targeted compounds, and operating conditions of the processes in the WWTPs, did influence the removal efficiency of pharmaceuticals in wastewater [34].

Thus, as shown in Table 1, for some methods, there is a wide variability of removal efficiency for different compounds across various WWTPs in Africa.

Results depicted in Table 1 show the wide variability of removal efficiencies for different compounds across various WWTPs. A reduction of over 95% was recorded in all WWTPs, which shows that both of the biological processes were efficient in the removal. With respect to wastewater treatment, CECs are partially removed by wastewater stabilization ponds (WSPs) and trickling filter technologies to a similar extent as compared with other techniques (e.g., conventional activated sludge and constructed wetlands), but long hydraulic residence times and thus large surface areas are required. In the African context, numerous adsorbents have been investigated. Various adsorption mechanisms have been reported in different studies for the uptake of pharmaceuticals from water using various adsorbents. In these views, the mode of adsorption was observed to be exclusive for a specific adsorbent directed to a particular pharmaceutical or group of analytes.