Subjects: Others
View times: 74
Submitted by:

Plastics are broken down to microplastics (MPs), which are <5 mm in size. There are two types of MPs—primary MPs that are intentionally manufactured (detergent) and secondary MPs that are generated via mechanical collision, biodegradation, and photo-oxidative degradation of primary MPs. Both types of MPs carry toxic organic pollutants and heavy metals, since they have large surface areas and strong hydrophobicity.

Microplastic (MP)-based contaminants in the environment are pervasive, but standard technologies used for MP identification have not yet been reported. Human beings take up MPs from the environmental ecosystem through the food chain without any particular purification. MPs can penetrate into capillaries from the bloodstream, resulting in endocrine system disorders or toxicity.
In this review, we introduced several technologies, such as filtration using membranes, biological degradation, electrocoagulation, and removal using nanoparticles, used for the purification of MPs or related contaminants. Current studies of identification methods of MPs and evaluation tests of MPs exposure-based harmfulness in vitro and in vivo were summarized.

In recent years, plastic waste and pollution have become widespread in environmental ecosystems, causing harm to human health[1][2]. Plastic pollution ranges from oceanic[3] and terrestrial[4] to atmospheric[5] pollution. Plastics are broken down to microplastics (MPs), which are <5 mm in size. There are two types of MPs—primary MPs that are intentionally manufactured (detergent) and secondary MPs that are generated via mechanical collision, biodegradation, and photo-oxidative degradation of primary MPs. Both types of MPs carry toxic organic pollutants and heavy metals, since they have large surface areas and strong hydrophobicity. Furthermore, the toxic materials can be maintained for a long time due to the chemical stability of MPs for thousands of years. MPs are ingested and accumulated in plants/animals and finally humans via the food chain. Therefore, purification of MPs by removing and/or extracting is required. However, methods of identification, quantification, and exposure assessment evaluation of MPs have rarely been established.

Microorganisms can adapt to almost all environments, including those with plastic polymers. The microbes adhere onto the polymer surface for microbial colonization. Colonized microbes then excrete extracellular enzymes, resulting in hydrolytic cleavage of the polymer[6][7]. The polymer is degraded into polymers having low molecular weight and mineralized to carbon dioxide and water. Biological degradation of MPs using microorganisms is eco-friendly and environmentally safe for cleaning natural ecosystems.

Biodegradation of PE pellets by the marine fungus Zalerion maritimum has been previously studied[8]. The fungus reduced the mass and size of the micropellets and altered their molecular and chemical elements, as evaluated by attenuated total reflectance Fourier transform infrared spectroscopy (FTIR). Another study focused on the screening of bacterial isolates for the degradation of various MPs consisting of PE, polyethylene terephthalate (PET), PP, and PS[9] (Figure 1). Among the bacterial isolate candidates, two strains cultivated on a synthetic medium contain different types of MPs. The extent of biodegradation was evaluated by morphological and structural changes. After 40 days of incubation, the weight loss percentage (or removal efficiency) of PE, PET, and PS using one of the bacterial isolates (Bacillus cereus) was 1.6%, 6.6%, and 7.4%, respectively. The weight loss percentage of PE, PET, PP, and PS using another bacterial isolate (Bacillus gottheilii) was 6.2%, 3.0%, 3.6%, and 5.8%, respectively.

Figure 1. Growth curves of (a) Bacillus cereus and (b) Bacillus gottheilii used for microplastic biodegradation[9]. (Reprinted with permission from [9]. Copyright 2017 Elsev.).

Coagulation and subsequent ultrafiltration is a notable approach for the removal of pollutants in water plants due to the outstanding purification quality of the effluent. Recently, coagulation used for MP removal has attracted interest. Both Fe- and Al-based salts have been commonly used as coagulants[10][11]. Coagulation-mediated flocculation contributes to MP trapping and/or sweeping. Al-based coagulants may cause potential side effects in humans; for instance, taking in residual aluminum in water has been thought to be neurotoxic[12]. The effect of the size and surface status of MPs is important for the efficacy of coagulation and further purification. The removal efficiency of pristine MPs using the coagulant at a very high dose (>60 mg aluminum/L) is <10%. This can be attributed to the weak interaction between the pristine plastic surface and the coagulant. This interaction is increased when real samples from the environment are used, since the MP surface is weathered due to photooxidation and fragmentation.

Electrocoagulation is used to prepare the coagulant for MP purification electrically using metal electrodes. This process is simple and robust. Metal ions, including Fe2+, Al3+, and OH− ions, are generated via electrolysis of the electrodes. These ions then contribute to the production of metal hydroxide coagulants. The coagulants destabilize or break down the suspended particles or colloids, resulting in closer van der Waals forces. Additionally, the coagulant forms a sludge that traps the suspended solids. One research group attempted to remove PE beads from wastewater and studied the effect of pH, NaCl concentration, and current density in the wastewater environment. Removal efficiency of PE was >90% in pH ranging from 3 to 10[13]. In this technical study, the removal efficiency of PE microbeads used as model MPs by charging neutralization via Al3+ ions and forming flocculation, followed by flotation or sedimentation, was >90%[13]. The effects of coagulation and flocculation on improving MP removal using PE and PS microspheres and polyester fibers were studied[14]. Therefore, electrocoagulation of MPs provides a cost-saving purification method that does not depend on chemicals or microorganisms.

In our studies, the coagulation of liposome-based particles (0.1~0.2 μm) was observed by introducing Fe-salt into surface phenolic liposome. Figure 3 shows the metal-phenolic coordinate bonds were attributed to trigger the coagulation. The Fe3+ concentration-dependent coagulation was clearly observed in aqueous solution. We believed that the chemical modification/incorporation of surface of MPs using phenolic molecules, then metal ion would be coagulants to generate coagulation of MPs. With coagulation of MPs, filtration efficiency to remove MPs would be enhanced for water treatment. Membrane-based filtration is a commonly recognized technology used for water purification. Recently, membrane bioreactors have been connected with conventional membrane filtration technology to remove MPs from wastewater. However, this technique is not suitable for the volumes of water-based filtration because of low flow rates [18]. Furthermore, the removal efficiency of MPs using membranes particularly depends on membrane durability, influent flux, and MP size and concentration[19]. Filtration requires high pressure, energy, and cost. The removal efficiency of MPs via filtration technology using membranes is insufficient without membrane bioreactors[20].

The accumulation of MPs and small anthropogenic litter (SAL; e.g., cellulose products manufactured from the natural material) in aquatic environments is an increasing concern. To purify MP and SAL pollutants, wastewater treatment plants (WWTPs) have been developed (Figure 4). Purification is performed via several filtration-based treatments—activated sludge treatment as secondary treatment, granular sand filtration as tertiary treatment, and use of membrane bioreactor systems for microfiltration. The WWTP with secondary treatment removed 95.6% of the pollutants, the plant with tertiary treatment removed 97.2% of the pollutants, and the membrane bioreactor plant removed 99.4% of the pollutants[21]. However, MPs of size <20 μm are not retained or filtered in general WWTPs[22][23][24]. In summary, membrane-based filtration requires a complementary system for capturing smaller MPs without filter clogging[25]. 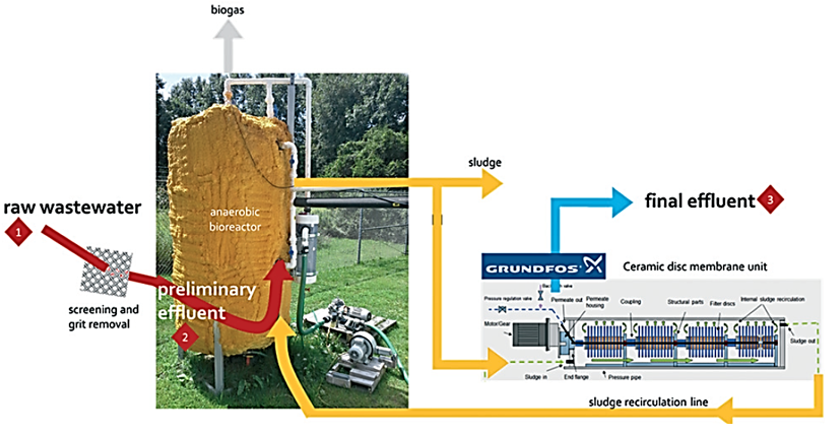 Another water purification method is the extraction and removal of organic, inorganic, and microbial contaminants, including MPs, using NPs. A research group developed a polyoxometalate ionic liquid, which was adsorbed onto silica shell-magnetic core NPs, and studied the efficient and quantitative removal of water pollutants including MPs. Another group suggested that hydrophobic Fe NPs, which could trap PE and PS beads (10–20 μm) and other types of MPs (>1 mm) at removal efficiencies of 92% and 93%, respectively, were recovered using a magnet. In contrast to the traditional filtration technique, water purification using magnetic particles is suitable for the large volumes of water-based treatment without large infrastructure.

One interesting strategy for MP removal is the use of self-propelled micromotors with a photocatalyst. A research group proposed TiO2 particle-based photocatalytic propulsion using a gold coating layer. In the presence of peroxide and water, the micromotor could travel efficiently under ultraviolet (UV) irradiation. The particles collected and removed MPs and suspended matter from environmental samples under real-time monitoring[26]. As shown in Figure 5, individual catalytic particles performed excellent collection efficiency and removal of suspended matter and MPs from environmental water samples. After 120 s, most of the zeolites from the washing powder were separated from the UV-illuminated area, resulting in a removal efficiency of approximately 77% (Figure 5A,B). MPs were extracted from a face cleansing cream sample in a 0.2% H2O2 solution. Similar to zeolites, MPs were removed with an efficiency of approximately 71% (Figure 6C,D). In only 40 s, 12 out of 18 MPs from a Warnow River sample were moved from the UV area using magnetic particles, reaching a removal efficiency of 67% (Figure 5E,F)[26].

Another approach for MP removal is the use of a metal-organic framework (MOF). MOFs show the benefits of high porosity, structure control, multiple functionalities, and charge for pollutant removal. One research group developed zirconium MOF-based foam as a platform for MP removal [27]. Under optimized conditions, a removal efficiency of ~95.5% was achieved. Additionally, MOF recycling and large-scale filtration could be performed.