Relapse after apparent remission remains a major cause of death in patients with acute myeloid leukemia (AML). On the cellular level, leukemia relapse is considered to emerge from subpopulations of therapy-resistant leukemic stem cells (LSC). Identification and targeting of LSC are thus most important goals for AML treatment. However, AML and their LSC are highly heterogeneous.

Acute myeloid leukemia (AML) is a devastating, rapidly-evolving disease characterized by an abnormal proliferation of poorly-differentiated cells which impairs normal hematopoiesis. AML patients suffer from cytopenia associated with recurrent infections, anemia, easy bleeding, and other manifestations [1] and show highly variable responses to therapy and survival rates. Notably, a major cause of disease progression and relapse is the persistence of therapy-resistant, clonogenic leukemic subpopulations: the leukemic stem cells (LSC) [2].

In 1994, John Dick and colleagues were the first to prove the existence of human LSC in an in vivo experimental model. Human CD34+ leukemic cells were shown to repopulate the bone marrow (BM) of severe combined immunodeficient (SCID) mice, while CD34− leukemic blasts remained non-leukemogenic [3][4]. These CD34+ cells responsible for leukemia initiation and maintenance were termed LSC. Nowadays, they are documented as cells with enhanced capacities to selectively escape chemotherapy treatments [5] as well as immune surveillance [6], thus leading to disease relapse after therapy, a major cause of death in these patients. Since AML is highly heterogeneous with respect to genetic alterations, epigenetics, and leukemia cell of origin, it is not surprising that considerable heterogeneity is also observed among surface markers of AML cells and their LSC [2], making immunological targeting of LSC a constant challenge [7][8][9].

Hematopoiesis is organized hierarchically with a minor subset of hematopoietic stem cells (HSC) giving rise to all blood cells during the lifespan of an individual. HSC must balance regenerative requirements (which naturally involve cell division and differentiation) with the need to protect their own genomic integrity by reducing cell division. In order to achieve this, HSC undergo highly complex fine-tuned interactions with the BM microenvironment and interact with several other cell types (e.g., osteoblasts, stromal cells, endothelial cells, adipocytes, and neural cells) via soluble factors, biophysical forces, and cell-mediated interactions [10]. Similarly, LSC also reside and are influenced by the so-called BM niche, which sustains their quiescence and protects them from genotoxic stress [11][12].

AML is also organized hierarchically and contains subpopulations of LSC that share functional and molecular properties with their cells of origin, the healthy hematopoietic stem and progenitor cells (HSPC) [4][13][14][15]. Consistent with a close relationship between these two cell types, molecules expressed on healthy HSPC, i.e., CD34, were also reported to identify LSC [16]. Functionally, the CD34 family encompasses podocalyxin and endoglycan proteins and is considered to regulate cell differentiation, adhesion, trafficking, and proliferation [17]. CD34 is expressed on the vast majority of HSC, but rare CD34− HSC giving rise to CD34+ HSPC have also been reported [16].

In 2016, the LSC17 gene expression score was defined as the molecular LSC hallmark that predicts outcome and treatment resistance in patients with AML [18]. Among the genes highlighted in the LSC17 score were e.g., CD34 and the G protein-coupled receptor GPR56, a surface protein involved in cell adhesion which was also described to mark healthy HSC [16][19]. However, great phenotypic heterogeneity is observed in AML LSC and a wide range of surface markers has been found to identify LSC in only some, but not all AML (e.g., CD93, TIM3, CD44, CD123, etc. [9][20][21][22][23][24][25][26]).

2. The Relevance of Immunomodulatory Proteins for LSC Detection

Interestingly, a variety of antigens involved in LSC identification are in fact involved in immunological processes (Figure 1, Table 1). This suggests that LSC and non-LSC may have different interactions with the immune system. This notion has been substantiated by recent work from our research group demonstrating that LSC selectively escape immune surveillance by suppressing surface expression of NKG2D ligands (NKG2DL) [6]. When compared to corresponding non-stem leukemic blasts from the same patients, LSC lack expression of such ligands for activating NKG2D receptors on natural killer (NK) cells thereby evading NK-mediated lysis. In several AML patient samples of heterogeneous genetic backgrounds, lack of NKG2DL surface expression robustly distinguished LSC from other non-stem leukemic cells [6]. 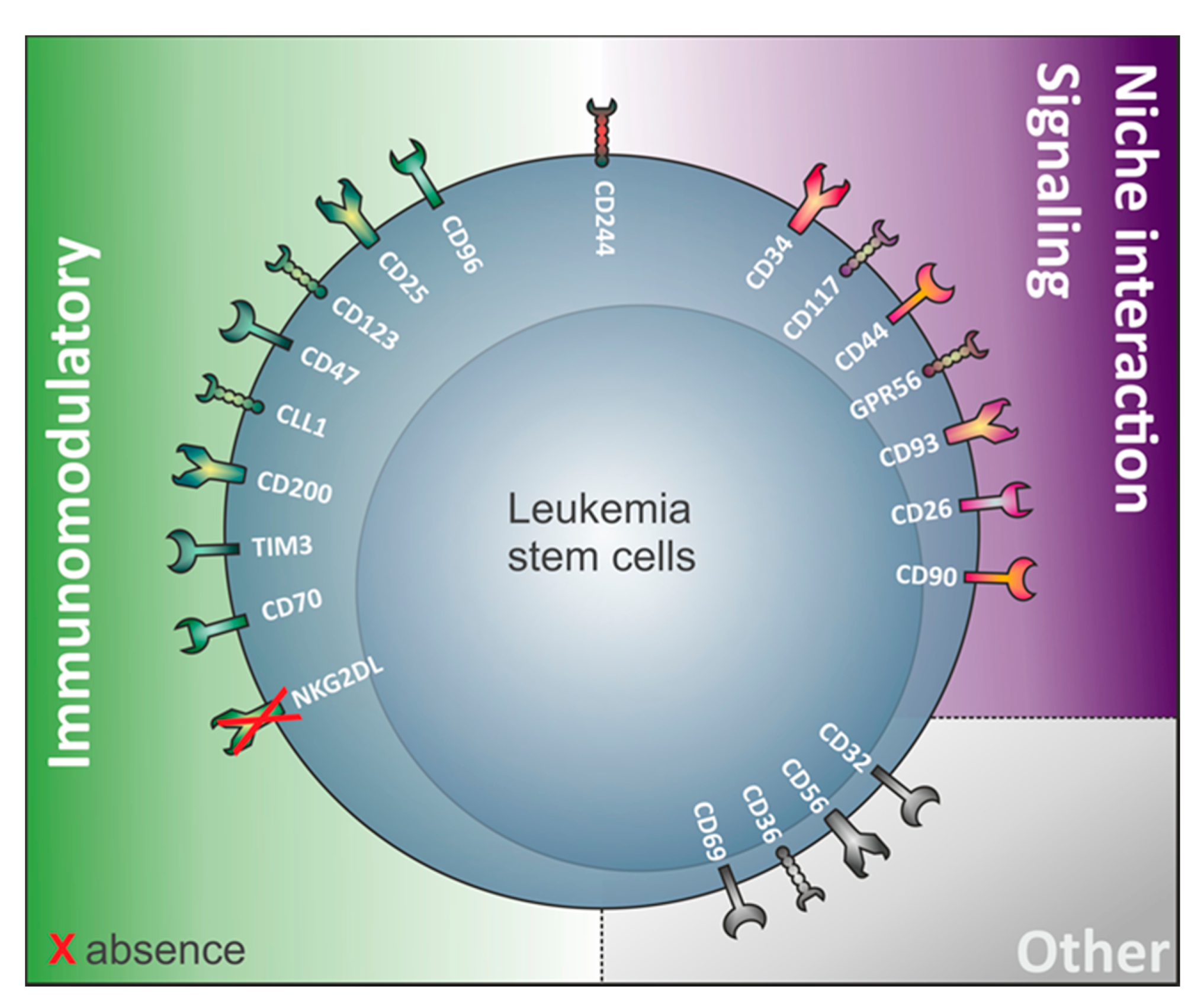 Table 1. Non-comprehensive list of human markers that can be found on LSC and their (potential) expression on the cell surface of other healthy blood cells. Highlighted in grey are the markers expressed on the cell surface of LSC from both CD34-expressing and non-expressing acute myeloid leukemia (AML). In white: markers only demonstrated to play roles in LSC from CD34 expressing AML. N.D: Not described/MPP: multipotential progenitor/MEP: megakaryocyte–erythroid progenitor).

Last but not least, the immunoglobulin-like and integrin-associated protein CD47 was identified as a novel AML LSC marker [55]. CD47 serves as a ligand of signal regulatory protein-1 (SIRP-1) and thereby functions as a “don’t eat me” signal, protecting LSC from macrophage phagocytosis [54].