Probiotics and prebiotics are microbiota-management instruments for improving human health once they may be beneficial for maintaining a healthy community of gut microbiota and bowel function. Probiotic’s main target is the gut, via the gastrointestinal tract, although direct application to other body zones such as the vaginal tract, the oral cavity, and skin have been studied.

Probiotics—a word of the modern era, the denotation “for life”—are live microorganisms that are intended to have health benefits when consumed or applied to the human body [1]

Probiotics can be found, naturally, in yogurt and other fermented foods and beverages. The microbiota of fermented products is an intricate microbial community made of indigenous microorganisms inherently associated with the raw materials and/or those that are present on the equipment and surfaces of processing sites where chosen microorganisms may be used as starter cultures [2].

Supplementation with probiotics, prebiotics, and synbiotics has shown promising results against various enteric pathogens due to their unique ability to compete with pathogenic microbiota for adhesion sites, to alienate pathogens, or to stimulate, modulate and regulate the host’s immune response by initiating the activation of specific genes in and outside the host intestinal tract. Probiotics have also been shown to regulate fat storage and stimulate intestinal angiogenesis [3].

Probiotics are made of good live bacteria and/or yeasts that naturally live in our body [4]. So, for a microbe to be called a probiotic, it must have several characteristics. These include (i) survive in our intestine after ingestion (being eaten); (ii) have a proven benefit and (iii) be safely consumed. Probiotics are also able to improve gut barrier function, competing with pathogenic microbiota for adhesion to the gut and improving their colonisation [4].

Probiotics may contain a variety of microorganisms. The most common are bacteria that belong to groups called lactobacilli, lactococci, and bifidobacteria [5]. Other bacteria may also be used as probiotics, like Pediococcus and Streptococcus [6][7] and so may yeasts of the genera Saccharomyces like Saccharomyces boulardii [8], (Figure 1). 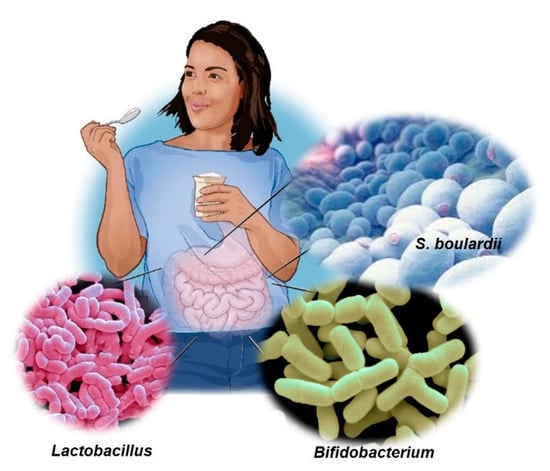 Figure 1. Probiotics are made of both bacteria and yeast. Common probiotic bacteria can include Lactobacillus and Bifidobacterium. The most common yeast found in probiotics is Saccharomyces boulardii [9].

In this huge world of biotics, besides probiotics in the literature also appears the denominations of “postbiotics”, “prebiotics”, and “symbiotics”. Postbiotics are the latest member of the biotics family. This denomination refers to bioactive compounds produced during a fermentation process by food-grade microorganisms. Postbiotics include microbial cells, cell constituents, and metabolites  [10] such as short-chain fatty acids (SCFAs), functional proteins, secreted polysaccharides, extracellular polysaccharides (EPS), cell lysates, teichoic acid, peptidoglycan-derived muropeptides, and pili-type structures [11][12]. These compounds are resistant to hydrolysis by mammalian enzymes [3], and are described as also having the proposed health effects of the addition of probiotics. Postbiotics can be divided into paraprobiotics (also called ghost or inactivated probiotics) that are “non-viable microbial cells, intact or broken, or crude cell extracts which when administered in sufficient amounts, confer benefits on the human consumer”, like S. boulardii, that can enhance barrier function against species, and improves angiogenesis in vitro and in vivo in epithelial cells by activation of α2β1 integrin collagen receptors [13]; and probioceuticals/probiotaceuticals which defines probiotic resulting factors such as reuterin from Lactobacillus reuteri [14]. The denomination of FIFs (fortified infant foods) can also be used to designate “infant or follow-on formula” that has been fermented with lactic acid-producing or other bacteria and in most cases does not contain viable bacteria [15].

Prebiotics are some nutrients that modify the gut microbial flora. They can change the microbiota composition by stimulating the growth of certain species, thus promoting health benefits in the host [10],[16]. They are not easily digested by humans although possess a selective function in the stimulation of growth or activity of beneficial bacteria in the gut [17]. Insulin, oligofructose, and fructooligosaccharides (FOS), as well as galactose-containing and xylose-containing oligosaccharides, are some of the commonly known prebiotics [3],[18]. Prebiotics are obtained from sources like vegetables, fruits, and grains; They do not serve only as an energy source but also have health benefits acting as anti-inflammatory agents and reducing the symptoms associated with intestinal bowel disorders, and preventing colon cancer [19].

Symbiotics are a fusion of probiotics and prebiotics products and help to enhance the survival and the implantation of live microbial dietary supplements in the gut [20]. They contribute considerably to human health. Commercial interest in functional foods containing symbiotics has increased leading to research in this area focused on developing new health-promoting foods and drinks.