Recently, various drug and gene delivery systems employing physical energy, such as ultrasound, magnetic force, electric force, and light, have been developed. Ultrasound-mediated delivery has particularly attracted interest due to its safety and low costs. Ultrasound exposure increases cell membrane permeability and facilitates the delivery of drugs or genes into cells. Its delivery effects are also enhanced when combined with microbubbles or nanobubbles that entrap an ultrasound contrast gas. Furthermore, ultrasound-mediated nucleic acid delivery could be performed only in ultrasound exposed area.

Gene therapies are expected to be effective therapeutic strategies for intractable diseases such as cancers as well as genetic and inflammatory diseases. In recent years, the number of gene therapy targeted diseases has been increasing, and neurodegenerative and cardiovascular diseases that demonstrate an increased risk due to aging have also been attracting considerable attention as probable targets. For instance, gene therapies for Parkinson’s disease, Alzheimer’s disease, and ischemic disease are actively being studied. However, the safe and efficient delivery of nucleic acids is a major obstacle in their development. In particular, for RNAi-based gene therapies, it is important to avoid degradation by nuclease and their rapid removal from circulation. Various technologies, such as chemical modifications of RNA and nanoparticle-based delivery systems, have been proposed [1][2][3][4][5]. Recently, methods of RNA delivery with external stimuli, including light, ultrasound, electrical fields, and magnetic fields, have been investigated and are expected to improve transfection and therapeutic efficiencies [6][7]. Nanomaterials have been widely used with external stimuli to amplify energy, induce release from carriers, and transfer to target site. These methods show little effect until stimulated with external energy and are thought to be safe for nontarget tissues without stimuli. Furthermore, the development of theranostic (a term for combining therapeutics and diagnostics) nanoparticles has gained attention. Various combinations of nanoparticles with external stimuli are reported to facilitate not only nucleic acid delivery, but also optical imaging, magnetic resonance imaging, nuclear imaging, and computed tomography [8][9][10][11] (Figure 1). Ultrasound imaging is used frequently in clinical settings and valuable for the early detection or follow-up of chronic diseases that increase with age. Furthermore, as it is convenient and non-invasive, ultrasound technology is expected to be a useful theranostic tool. Contrast agents, called microbubbles, are often used in combination with ultrasound to improve the resolution and sensitivity of the imaging. In recent years, nanoscale contrast agents have been developed. Furthermore, micro- or nanobubbles have previously been investigated as site-specific drug or gene delivery tools [12][13][14][15][16][17]. To exploit the combination of ultrasound and bubbles both for diagnosis and therapeutics as a theranostic system, various types of bubbles valuable for systemic administration have been well documented in recent years. 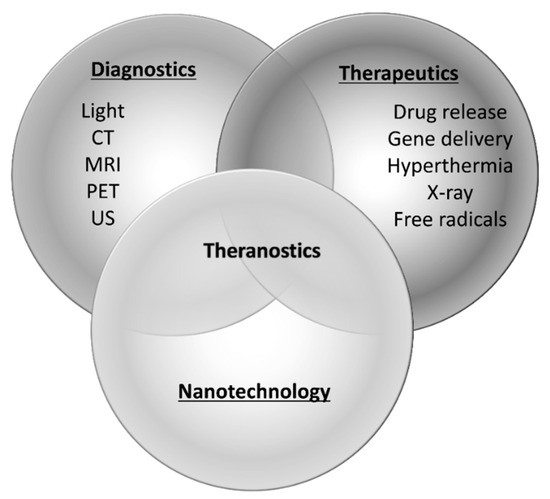 Ultrasound technology is essential for the diagnosis of various diseases due to its noninvasiveness, small device size, simple and real-time operations, and low costs. In addition, the technology is also used in clinical settings as therapeutic equipment for calculi, tumors, bone fractures, and Parkinson disease. It has attracted attention as a potential energy for use with theranostic systems. In recent years, ultrasonic devices have being actively developed (Figure 2). Catheter-based ultrasound and MRI-guided focused ultrasound have already been utilized in clinical settings. Computer-controlled ultrasound systems can provide precise exposure to the target sites. These devices are used for thrombolysis in the treatment of diseases, such as cerebral infarct, pulmonary embolism, and deep venous thrombosis, and the ablation of hepatic cancer, prostate cancer, breast cancer, and uterine fibroids. Furthermore, it has been reported that the combination of ultrasound and microbubbles could enhance gemcitabine treatment of inoperable pancreatic cancer in clinical trials [18]. 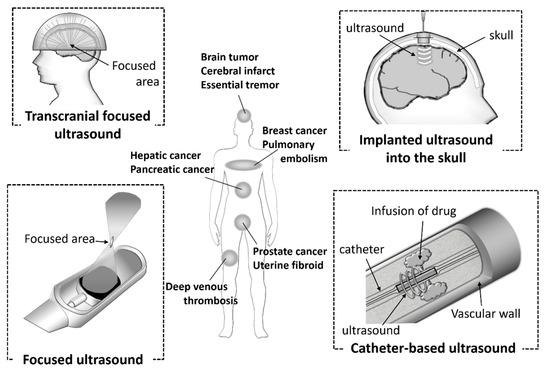 The approval of a transcranial focused ultrasound system has also been obtained for the treatment of essential tremors. Ultrasound devices have also been used for sonodynamic therapy (SDT). SDT is a cancer therapy in which the sensitizer accumulated in the tumor cells is activated by ultrasound and produces free radicals. SDT can provide deep penetration of the target cancer cells compared with photodynamic therapy (PDT), therefore the combination of sonodynamic and photodynamic therapy (SPDT) can been adopted, depending on the area of the tumor. Ultrasound diagnosis and treatment are already widespread and actively developed. The functionalized microbubbles or nanobubbles, such as targeting bubbles or nucleic acid-loaded bubbles, have the potential to enhance these effects.

Recently, BBB openings using microbubbles and ultrasound have been focused on as a novel therapeutic strategy for central nervous system (CNS) diseases. The BBB limits the delivery of systemically administered drugs to the brain, so as to protect it from exposure to potentially damaging substances. Therefore, the BBB has been main obstacle to delivering valuable therapies for CNS diseases. It has been reported that using focused ultrasound-mediated microbubbles enabled a transient BBB opening in a localized brain region [19][20]. Therapeutic ultrasound can cause the oscillation and collapse of microbubbles. Stable and inertial cavitation enables microbubbles not only to cause transient disruptions in the cell membranes, but also to increase the BBB permeability. In fact, the combination of our nanobubbles with focused ultrasound could also serve to increase the BBB permeability [21]. The BBB permeability was assessed using Evans blue dye. It is well known that Evans blue dye stably binds to serum albumin. Furthermore, the extravasation of Evans blue dye indicates albumin extravasation. The opening of the BBB with nanobubbles and focused ultrasound was confirmed by the extravasation of Evans blue dye preinjected prior to ultrasound exposure. We demonstrated that the effect of BBB opening was transient. Additionally, the BBB permeability and tissue damage were influenced by the ultrasound intensity, exposure time, and molecular size. Furthermore, it was also reported that phosphorodiamidate morpholino oligomer (PMO), which is one of the chemically modified nucleic acids, or pDNA could be delivered to ultrasound exposed cerebral hemispheres. We considered that a similar situation occurred when pDNA was transfected to the brain using the combination of ultrasound and Ang2-modified cationic nanobubbles mentioned above. Many research groups have reported the effects of BBB opening and the potential applications of gene therapy using pDNA, siRNA, or AAV [22][23][24][25][26][27][28][29]. In a clinical setting, the state-of-the-art MRI-guided focused low-intensity ultrasound was used for a patient with a malignant brain tumor to deliver chemotherapeutic agents in 2015 [30]. In the next year, another group also reported that the chemotherapeutic agent was delivered to the glioblastoma using a pulsed ultrasound device implanted into the skull of the patient [31]. In both therapeutic strategies, microbubbles were used with transient BBB openings. CNS diseases are often intractable, and tissue damage to the not therapeutic area can easily lead to disabilities. Therefore, ultrasound-mediated diagnosis and therapies using computer-controlled precision devices and functionalized bubbles might have significant benefits.

The mechanisms of aging and the onset of many diseases have been identified at the genetic level. Furthermore, the elucidation of gene regulatory networks and the development of technologies for nucleic acid synthesis are also progressing rapidly. In these situations, novel therapies with nucleic acids have become increasingly important. The delivery of nucleic acids by a combination of ultrasound and micro- or nano-bubbles, has been shown to be effective in the treatment of diseases such as cardiovascular disease, CNS disease, and tumors. Low power ultrasound technology, which is used for imaging, is well known to be noninvasive and can be used repeatedly. Whereas, high power ultrasound already used clinically, for instance in the ablation of cancer, could cause undesirable bioeffects due to its high intensity [32]. Therefore, high power therapeutic ultrasound is used, paying careful attention to the safety of patients. Unfortunately, it is not obvious the bioeffects by ultrasound for micro- or nanobubbles-based gene therapies. For the realization of clinical application, more detailed information about safety is required, and it is essential to establish appropriate ultrasound conditions which can also be used repeatedly. Owing to the possibility of repeated use and device miniaturization, it is particularly advantageous in elderly patients, particularly for in home care which will continue growing in the near future. However, the development of bubbles which is useful both for diagnosis and therapy is not sufficient, although various ultrasound devices are developed remarkably and widely spread in clinical settings. As the development of useful bubble formulations progresses, the combination of bubbles and ultrasound is highly valuable for the assembly of a theranostic system in the diagnosis and therapy of diseases that increase in risk due to aging.