+ point
Thank you for your contribution! You can also upload a video entry related to this topic through the link below: https://encyclopedia.pub/user/video_add?id=2568
Check Note
2000/2000
Peer Reviewed
Spatial Hurst–Kolmogorov Clustering
Upload a video
This is a peer-reviewed entry published in Encyclopedia Journal, full entry can be found at 10.3390/encyclopedia1040077

The stochastic analysis in the scale domain (instead of the traditional lag or frequency domains) is introduced as a robust means to identify, model and simulate the Hurst–Kolmogorov (HK) dynamics, ranging from small (fractal) to large scales exhibiting the clustering behavior (else known as the Hurst phenomenon or long-range dependence). The HK clustering is an attribute of a multidimensional (1D, 2D, etc.) spatio-temporal stationary stochastic process with an arbitrary marginal distribution function, and a fractal behavior on small spatio-temporal scales of the dependence structure and a power-type on large scales, yielding a high probability of low- or high-magnitude events to group together in space and time. This behavior is preferably analyzed through the second-order statistics, and in the scale domain, by the stochastic metric of the climacogram, i.e., the variance of the averaged spatio-temporal process vs. spatio-temporal scale.

Clustering in nature has been first identified by H.E. Hurst (1951) [1] (Figure 1a) while studying the long-term behaviour in a variety of scales of the discharge timeseries of the Nile River in the framework of developing engineering projects in its basin.

Particularly, H.E. Hurst discovered a tendency of high-discharge years to cluster into high-flow periods, and low-discharge years to cluster into low-flow periods. This behaviour, also known as the Hurst phenomenon or Joseph effect (Mandelbrot, 1977) [2], has been verified in a variety of hydrological [3], hydrometeorological and turbulent processes [4] [5] and in other geophysical and alternate fields such as finance, medicine [6], and art [7] [8] [9].

All these processes are characterized by long-term persistence (LTP), which leads to high unpredictability in long-term scales due to the clustering of events as compared to the purely random process, i.e. white-noise (e.g. as in a fair dice game [10]), or other short-range dependence models (e.g., Markov).

The mathematical description of the Hurst phenomenon is attributed to A.N. Kolmogorov (Figure 1b) who developed it while studying turbulence in 1940 [11] (Figure 1b), inspiring D. Koutsoyiannis [12] to name the general behaviour of the Hurst phenomenon as Hurst-Kolmogorov (HK) dynamics (Figure 2), to give credit to both contributing scientists and to distinguish it from the Gaussian LTP processes (e.g., fractional-Gaussian-noise [13]), and to incorporate alternate short-range dependence (e.g., Markov-behaviour [14]). 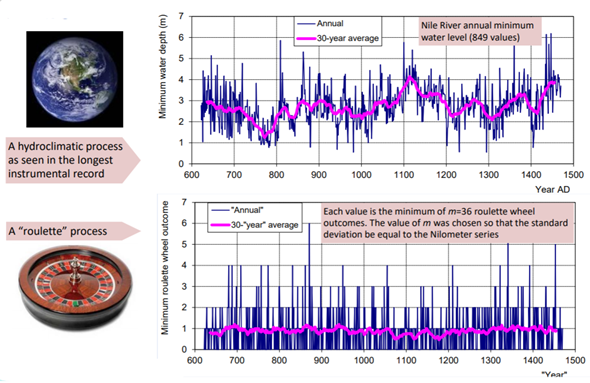 The HK dynamics has been recently also linked to the entropy maximization principle, and thus, to robust physical justification [15]. The stochastic simulation of the HK dynamics has been a mathematical challenge since it requires the explicit preservation of high-order moments  in a vast range of scales, affecting both the intermittent behaviour in small scales [16]  and the dependence in extremes [17] as well as the trends often appearing in geophysical timeseries [18].

More
© Text is available under the terms and conditions of the Creative Commons Attribution (CC BY) license; additional terms may apply. By using this site, you agree to the Terms and Conditions and Privacy Policy.
Upload a video for this entry
Information
Subjects: Statistics & Probability
Contributors MDPI registered users' name will be linked to their SciProfiles pages. To register with us, please refer to https://encyclopedia.pub/register :
G.-Fivos Sargentis
,
Theano Iliopoulou
,
Panayiotis G. Dimitriadis
,
Demetris Koutsoyiannis
View Times: 436
Online Date: 14 Oct 2020
Table of Contents
1000/1000
Hot Most Recent