Mesenchymal stem cells (MSCs) have the capacity for self-renewal and multilineage differentiation potential, and are considered a promising cell population for cell-based therapy and tissue regeneration. MSCs are isolated from various organs including dental pulp, which originates from cranial neural crest-derived ectomesenchyme. Recently, dental pulp stem cells (DPSCs) and stem cells from human exfoliated deciduous teeth (SHEDs) have been isolated from dental pulp tissue of adult permanent teeth and deciduous teeth, respectively. Because of their MSC-like characteristics such as high growth capacity, multipotency, expression of MSC-related markers, and immunomodulatory effects, they are suggested to be an important cell source for tissue regeneration.

Dental pulp is an unmineralized connective tissue that is composed of stem cells as well as fibroblastic cells, capillary blood vessels, peripheral nerves, lymphatic elements, and extracellular matrices and odontoblasts on the periphery of pulp tissue. DPSCs are isolated from adult human pulp tissue of impacted third molars, orthodontic teeth, and supernumerary teeth, and have been characterized as cells with intense clonogenicity, proliferative activity, and the ability to form mineralized nodules[9] (Figure 1).

2. Self-Renewal and High Growth Capacity of DPSCs and SHEDs

The ability to self-renew is one of the essential defining features of stem cells. This ability is divided into two types according to how they self-renew. One involves generating daughter cells with developmental potential similar to that of the original stem cells (symmetric division), while the other involves generating both undifferentiated cells and cells fated to differentiate (asymmetric division)[14] (Figure 2). Consequently, stem cells can expand during development, be maintained in somatic tissues, and participate in tissue regeneration.

3. Multipotency of DPSCs and SHEDs

DPSCs and SHEDs have the ability to differentiate into various cell types under appropriate culture conditions (Figure 3). 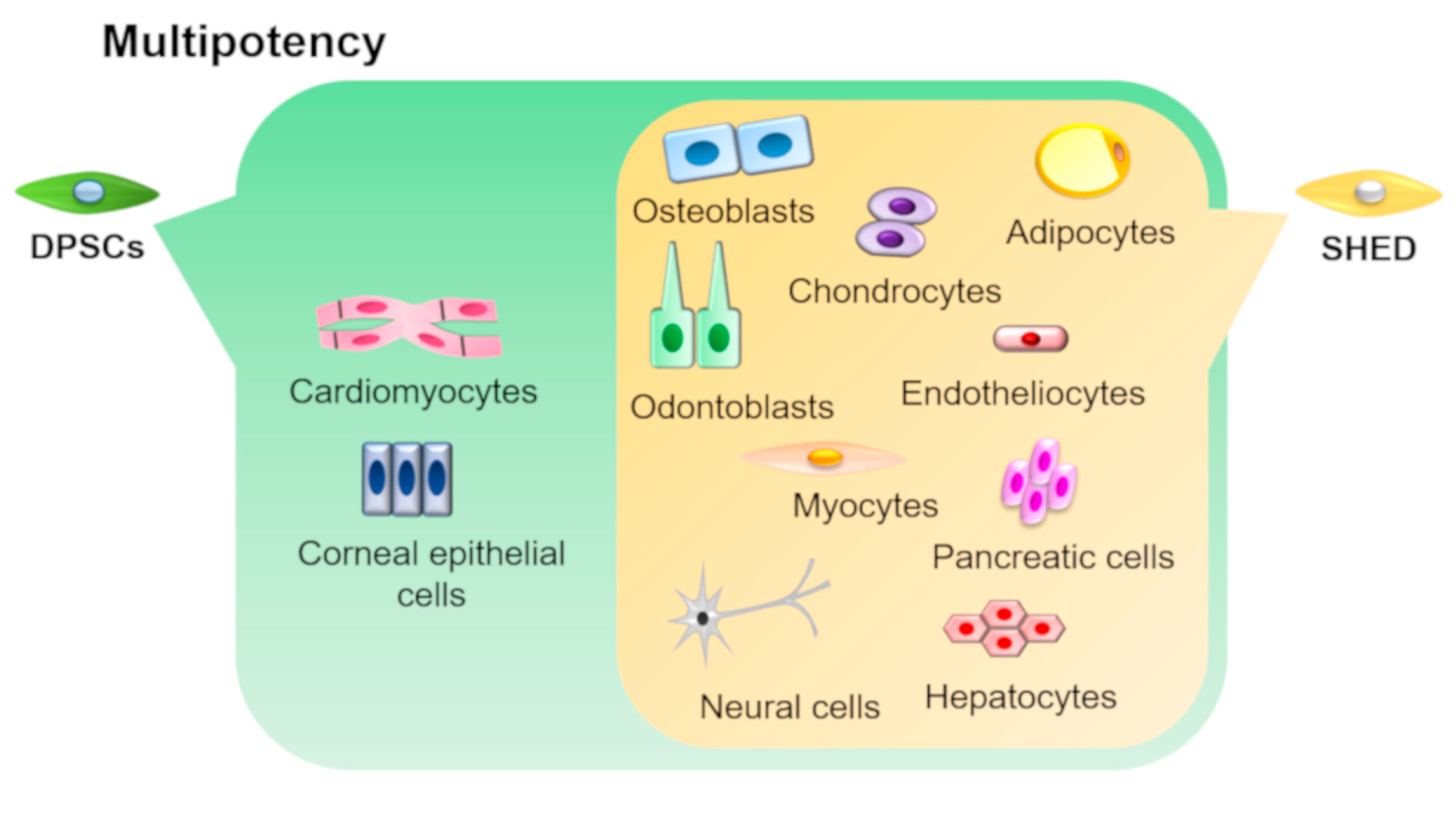 Semaphorin 3A (Sema3A), which is a member of the semaphorin family, was identified as an axonal guidance factor regulating nervous system development[19], and has been reported to play important roles in the development of various tissues such as blood vessels, peripheral nerves, and skeletal tissues[20][21][22]. In addition, Sema3A acts as an osteoprotective factor by inhibiting osteoclastic bone resorption and promoting osteoblastic bone formation[24]. Our previous study demonstrated that a multipotent human PDL cell line[23] highly expressed Sema3A compared with a PDL cell line with low differentiation potential (low-potent)[25]. In addition, we generated a Sema3A-overexpressing low-potent PDL cell line and clarified that these cells exhibited enhanced capacity to differentiate into osteoblasts and adipocytes. Moreover, Sema3A-overexpression enhanced self-renewal ability and increased the expression levels of markers of pluripotency, such as Oct-4, Nanog, and E-cadherin, and; MSC-related markers, such as CD73, CD90, CD105, CD146, and CD166[26]. Our results indicate that Sema3A regulates the stem cell features of PDLSCs and induction of this gene provide multipotency for a low-potent PDL cell line. Yamada et al. reported that Sema3A knockdown decreased self-renewal ability and the expression of Sox2, Oct-4, and CD44 in lung cancer stem cells. Their results support our hypothesis that Sema3A would play an important role in acquisition and maintaining of stemness.

Recently, we demonstrated that Sema3A increased migration, proliferation, and odontoblastic differentiation of DPSCs (Figure 4). Moreover, Sema3A facilitated reparative dentin formation after direct pulp capping in a rat pulp exposure model. These results suggested that Sema3A can recruit latent DPSCs to the wounded site and increase its biological activities to regenerate dentin/pulp complex. At the present time, we are planning to clarify the precise mechanisms of epigenetic regulation by Sema3A and to confirm the possibility for its use as a therapeutic agent that could increase the activity of hosts’ latent progenitor cells, especially DPSCs.

Figure 4. Schema of the effects of Semaphorin 3A (Sema3A) on DPSCs. In case of pulp exposure, DPSCs migrate toward the exposure site, then they proliferate and differentiate into odontoblasts to form reparative dentin. Sema3A can act as a bioactive agent to facilitate these regenerative processes. #, sealing material; *, Sema3A.