Estrogen receptor (ER) signalling promotes proliferation in breast cancer (BCa). Endocrine therapies (ET) target this signaling by preventing the production of its ligand estrogen, or by blocking its interaction with the ER. The ER is regulated by a range of posttranslational modifications (PTMs) including ubiquitylation, SUMOylation, phosphorylation, palmitoylation, acetylation, methylation and glycosylation. These PTMs control ER activity, stability as well as its interactions with other proteins. For example, kinases play significant roles in mediating crosstalk between the ER and the PI3K-AKT-mTOR and MAPK pathways, which are implicated in ET resistance. Another major control of ER activity is through the regulation of its half-life, largely by ubiquitin which initiates degradation through the ubiquitin proteasome system. As such, PTMs play a central role in the regulation of ER activity and stability.

The estrogen receptor (ER) is the main downstream effector of its ligand estrogen and has functions connected to the menstrual cycle, pregnancy, and lactation in females and in maintaining cardiovascular, nervous, musculoskeletal, and immune system functioning [1]. There are two subtypes of ER, namely ERα and ERβ, encoded by ESR1 and ESR2, respectively. These genes are located on separate chromosomes, ESR1 at position 6q24-27 and ESR2 at 14q22-24 [2,3,4]. Whilst highly similar, their ligand binding domains (LBD) differ, enabling specific physiological functions [1,5,6]. 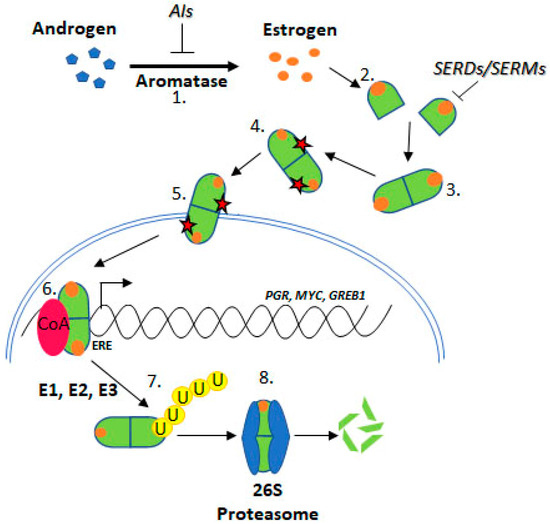 Alternatively, ER may crosstalk with the PI3K-AKT-mTOR or MAPK pathways, in a “non-genomic” manner (see below), in both scenarios promoting cell proliferation and suppressing apoptosis [10].

Approximately 75% of BCa express ER, which promotes oncogenesis. As such, the ER is a common target for BCa treatment using endocrine therapies (ETs) including tamoxifen, fulvestrant, and aromatase inhibitors (AIs) [11] (Figure 2). Tamoxifen is known as a selective ER modifier (SERM) and fulvestrant as a selective ER degrader (SERD) [12]. SERMs competitively bind ER forming an inactive complex, by preventing coactivator interactions [12,13,14,15]. SERDs also competitively bind ER; however, their binding targets the receptor for proteasomal degradation [16,17,18]. AIs are a group of drugs that prevent the synthesis of the estrogen, through inhibition of aromatase [19,20,21]. AIs include letrozole, anastrozole, and exemestane. Whilst these treatments are initially effective for many ER positive BCa patients, resistance remains a significant issue.

Since a major control of ER activity is through regulation of its half-life, changes to ER stability may influence sensitivity to ET. For example, posttranslational modifications (PTMs) and ESR1 mutations causing amino acid substitutions at PTM sites may influence ER stability, and ultimately activity.

The estrogen/ER complex can result in activation of two distinct types of signaling pathways, the genomic and non-genomic. In the genomic pathway, the ER regulates gene transcription through direct binding of its DBD to promotors containing an ERE, or through interactions with other transcription factors at promoter regions [9,26]. The non-genomic pathway, however, enables rapid signaling through bidirectional crosstalk with PI3K-AKT-mTOR and MAPK pathways. These pathways are frequently upregulated in BCa and enable signaling in an estrogen independent manner [27,28,29]. Several kinases from these pathways phosphorylate the ER at various sites, mediating ER stability, localization, and transactivational capacity, discussed in detail below [30,31]. Further, these pathways may contribute to ET resistance through phosphorylation at key sites, even in the absence of estrogen [32,33,34,35,36,37]. Additionally, crosstalk between ER and PI3K-AKT-mTOR and MAPK pathways is bidirectional. The ER may activate these pathways through interaction with modulator of non-genomic action of estrogen receptor (MNAR) scaffold protein and subsequent SRC activation [38,39]. Ultimately, these pathways promote cell cycle progression through increased expression of cyclin D1, and suppress apoptosis [38,40]. Understanding these interactions is important as the PI3K and MAPK pathways are frequently active in ET resistant BCa and contribute to ET resistance [27,28,29].

The ER is regulated by a range of PTMs including ubiquitylation, SUMOylation, phosphorylation, palmitoylation, acetylation, methylation and glycosylation [41,42,43,44]. These modifications are proposed to regulate the activity, stability, and interactions of ER with other proteins or DNA, and ESR1 mutations may influence PTMs and hence ER stability and function (Figure 3).

Whilst ER is produced through transcription and protein synthesis, changes to ER degradation kinetics is the major factor determining ER levels. In BCa, there is an imbalance between the rate of transcription, synthesis and degradation of the ER leading to increased ER stability and thus activity [45]. The half-life of the ER differs significantly depending on estrogen exposure. Generally, the ER half-life is 3–5 h [46] and estrogen presence can reduce the half-life to just 1 h [47]. However, persistent estrogen exposure causes relative ER stability. In fact, in MCF-7 cells exposed to estrogen for 72 h, ER half-life was increased to 6 h, due to the decreased rate of proteolysis associated with p-S118 [48].

2.2. Degradation by the Ubiquitin Proteasome Pathway

Several studies have shown increased ER stability in the presence of the proteasome inhibitor, MG132, indicating that degradation by the ubiquitin–proteasome system (UPS) regulates ER stability [47,49,50,51]. Degradation of the ER occurs predominantly through the UPS, which relies on ER ubiquitylation by ubiquitin activating enzymes (E1) and ubiquitin conjugating enzymes (E2). Conversely, the ER may be protected from degradation through the activity of ubiquitin ligases (E3), which remove ubiquitin from the ER.

Ubiquitin conjugation or removal occurs on lysine residues, and mutations resulting in an exchange, either of such lysines or of amino acids affecting the accessibility of important lysines, may therefore alter the protein’s stability. Additionally, some UPS proteins act as coactivators of nuclear receptors and promote downstream gene transcription [16,44,52,53]. For example, ubiquitin ligase E3A (E6-AP) acts as an ER coactivator and increases gene transcription [16][53]