Enterococci derived from an ancestor that was a commensal of aquatic life forms, when animals first became terrestrial. To cope with the stresses of the new terrestrial habitat, enterococci evolved to be tough bugs, resistant to a wide range of environmental and host factors. That made them extremely successful not only in adapting to the new way of life of their hosts, but also in colonizing other non-animal, and even inanimate, environments - such as feeds and foods. The plasticity of the enterococcal genome, together with their notable ability to trade virulence and antibiotic resistance, have enabled them to also become notable opportunistic, multi-resistant pathogens and act as reservoirs of pathogenicity and resistance determinants.

Traditionally, enterococci were regarded as a harmless commensal bacterium, and were even believed to have positive effects on a number of gastrointestinal and systemic conditions. However, when the commensal relationship with the host is disrupted, enterococci can cause invasive infections [1]. Enterococci are Gram-positive catalase-negative, non-spore-forming, facultative anaerobic lactic acid bacteria, and normal inhabitants of the gut flora of humans, many different mammals, birds, fish, reptiles, amphibians and insects, as well as nematodes [2][3]. Until 1984, the enterococci were considered as part of the genus Streptococcus, but they have constituted a unique taxonomic entity since the mid-1980s [4][5]. Today, over 50 different species of enterococci have been described, of which Enterococcus faecium and E. faecalis are the most common in the human gastrointestinal tract, whereas, among farm animals E. faecium together with E. cecorum, E. faecalis and, to some extent, E. hirae predominate, while E. mundtii and E. casseliflavus are commonly found in plant sources [6][7]. Moreover, ecology and epidemiological studies have reported E. faecalis and E. faecium as frequently isolated from food products (cheese, fish, sausages, minced beef, and pork) and the environment (sewage, soil, and water) [8]. Due to their preferred intestinal habitat, their wide occurrence, robustness, and ease of cultivation, enterococci are used as indicators of fecal contamination and are part of the hygiene standards for water and food products. Additionally, they are also suitable as important key indicator bacteria for veterinary and human antimicrobial resistance surveillance systems [5].

Because they produce bacteriocins, enterococcal isolates have a long-standing tradition as starter cultures or as supplements in food fermentation and food preservation [9]. Bacteriocin ST15 from E. mundtii has been shown to be effective against a range of Gram-positive and Gram-negative bacteria including Acinetobacter, Bacillus, Clostridium, Klebsiella, Lactobacillus, and Pseudomonas, whereas enterocins A, B, I, L and P, are active against Listeria species, Clostridium species, and Staphylococcus aureus [10]. Another beneficial aspect is the use of E. faecalis as a probiotic, promoting a positive gut environment. Additionally, enterococci have been shown to strengthen the immune system, reduce inflammation, and may even be indirectly involved in reducing the incidence of colon cancer [11].

Enterococci are very hardy organisms; they evolved to endure various adverse conditions and survive for several months in the environment [6]. They are able to survive in a range of stressful and hostile environments, including extreme conditions of pH and temperatures (between 10 °C and 45 °C), plus high NaCl concentration [8]. These attributes make enterococci ideally suited for fermentation applications but, ironically, these same attributes make them difficult to eliminate and control once they become established in a hospital environment. Therefore, enterococci are now firmly established as one of the major nosocomial pathogens and are increasingly becoming more resistant to antimicrobial agents. Presently, almost all nosocomial enterococcal infections are caused by either E. faecalis or E. faecium[6]. Of these, E. faecalis is the most virulent species, but E. faecium is of increasing importance as, in general, it frequently is more resistant to antimicrobials [4]. Commonly, these organisms are involved in hospital-acquired infections such as catheter-associated urinary tract infections, endocarditis, bacteremia, neonatal sepsis, surgical and burn wound infections, and more rarely meningitis [6].

Enterococci are typically harmless in healthy individuals. They become opportunistic pathogens mainly by causing infections in patients who are in Intensive Care Units, who suffer from a severe underlying disease, or who are immunocompromised. Therefore, the severity of illness and immune suppression can be directly associated with prolonged hospital and/or indiscriminate antibiotics use, and these are major risk factors for nosocomial acquisition of drug-resistant enterococci [12]. Antibiotic treatment may create new niches and nutrient resources, wherefore the existing commensal gut microbiota can be eliminated and subsequently replaced by opportunistic pathogens [13]. Patients in hospitals are typically treated with broad-spectrum antibiotics (penicillins and cephalosporins), which dramatically increases hospital-associated E. faecium colonization in their small intestine, cecum, and colon, outcompeting the normal Gram-negative gut microbiota [14][15]. In addition, some antibiotic therapies may lower the levels of C-type lectin RegIII produced by the host, allowing E. faecium to overgrow in the intestinal tract [15]. Furthermore, the intrinsic resistance of enterococci to several commonly used antibiotics and, perhaps more importantly, their malleable genomes plus their capacity to acquire and disseminate determinants of antibiotic resistance, are major factors that may have contributed to their adaptation to harsh environments [16]. Both microbial and host factors can contribute to the conversion of a second-rate pathogen into a first-rate clinical problem, as is seen nowadays.

2. Persistence of VRE Strains in Portuguese Food Animals, an Example

Vancomycin is still a frequently used antibiotic to treat infections caused by multiresistant enterococci, despite the present expansion of VRE strains representing a tremendous challenge to human infection control. In Europe, as previously explained, it has been suggested that the massive use of avoparcin in animal husbandry was associated with the high prevalence rates of VRE strains detected in food-producing animals and their subsequent expansion into the community. Once the use of avoparcin was discontinued, the prevalence of VRE among farm animals decreased.

Nevertheless, VRE are still present among farm animals. Figure 1 compares the prevalence of VRE reported in different settings in Portugal (food-producing animals, environmental, wastewater treatment plants, wild animals, and pets). The displayed data show that VRE strains are still broadly distributed in Portugal, being isolated not only from healthy food-producing animals, wild animals, and pets, but also from the environment. VRE are found in wastewater treatment plants and in pig breeding facilities. The environmental prevalence of VRE is troublesome, as the release of effluents into watercourses and the use of sludge in agriculture might actively contribute to the dissemination of VRE strains, resistant bacteria and resistance genes throughout the environment [17]. 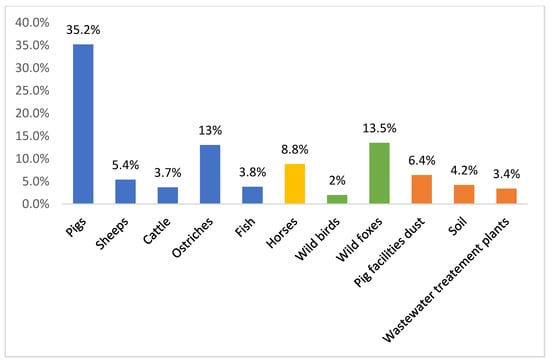 Furthermore, the persistence of VRE in food-producing animals and related environments (years after avoparcin withdrawal) indicates that coselection with other antimicrobial agents increased fitness of strains and the presence of specific mobile genetic elements cannot be ruled out. It is known that the ermB gene, encoding for macrolide resistance, can be carried by the same conjugative plasmid harboring vanA gene [27]. Moreover, a putative linkage of the glycopeptide, macrolide, and tetracycline-resistant genes has been implicated in the occurrence of VRE in the feces of food-producing animals [16]. In fact, tetracycline and macrolides are widely prescribed in pig husbandry to control respiratory and enteric disease and the use of one of these antimicrobials may favor the spread of resistance against antimicrobial from different groups. In a recent study, all VRE strains with acquired mechanisms of resistance (VREar) from pigs showed coresistance to tetracycline and erythromycin, which supports the hypothesis that this linkage could be a causative factor for the ongoing persistence of VRE [18]. It is important to notice that the mobile element Tn916/Tn1545-like transposon was detected in the majority of our VREar strains. This is consistent with the results from other Portuguese settings, where these mobile genetic elements were also frequently associated with acquired vancomycin resistance [21][25]. Moreover, it was reported, in Portugal, that human and swine share vancomycin-resistant E. faecium strains harboring Tn1546 on indistinguishable plasmids [28]. In addition, the rapid and extensive spread of VRE in Portuguese hospitals seems to be associated with the dissemination of the vanA gene on Tn1546-type transposons [28]. Nonetheless, VRE persistence, being continuously reported among animals and the environment, shows that this data should not be overlooked and must be continuously monitored.

In addition to food-producing animals, VRE and their resistance genes have been reported and detected in foods at retail (meat, vegetables, cheese, and milk) [29][30][31][32]. This is a cause for enormous concern since it favors the dissemination of antimicrobial resistance organisms, consequently reducing therapeutic options [33]. In Portugal, only a few studies have reported the presence of VRE in food such as cheese, poultry carcasses, and processed meat [29][34][35][36][37][38][39].