TiO2 NPs are one of the most extensively used NPs in different sectors [1]. For example, TiO2 NPs are widely used in the agriculture sector for different purposes such as nano-pesticides and nano-fertilizers to introduce sustainable agricultural practices [2]. The availability of these nano-based agrochemicals in the market is expected to rise in near future [3]. Similarly, the use of TiO2 NPs has also gained the utmost importance in other fields, and eventually from different sources, the inevitable release of these NPs into the environment is obvious either through a direct or indirect route. For example, in 2008, the first evidence of TiO2 NPs leaching (3.5 × 107 NPs per L) into the aquatic environment from facade paints was reported [4]. In 2011, TiO2 NPs were first detected in effluents of wastewater treatment plants, which were discharged into freshwater bodies where these NPs can cause unknown ecological risks [5]. TiO2 NPs have also been observed to detach from some textiles and paints due to washing or weathering and to run into wastewater treatment plants [6][7] and especially in sewage sludge reaching the approximate concentration of 2 g·kg−1 [8]. Sewage sludge is commonly employed as soil fertilizer in agriculture at the rate of approximately 3 tons per hectare (on a dry weight basis) annually [9][10][11] and become an ultimate source of TiO2 NPs dissemination in agricultural soils. However, the overall concentration of these NPs in the environment through direct exposure route will be much higher than the indirect release. Interestingly, in both soil and water medium, TiO2 NPs can be used for purification purposes due to their unique characteristics of photocatalysis in the presence of ultraviolet (UV) light [12][13]. Figure 1 below illustrates the brief overview of TiO2 NPs applications, their role in wastewater treatment and their impacts on agro-environment.

Figure 1. Illustration of the wide range of TiO2 NPs applications from industries, their release into the wastewater, and their possible exposure routes towards the agro-environment.

With the onset of industrialization, there has been a steady increase in the types and amount of pollutants released in the environment. These environmental problems have garnered much attention on the global scale, especially water scarcity. Global water scarcity is a temporal and graphical mismatch between freshwater resources and the world’s water demand. The increasing world population and urban industrialization have made water scarcity more alarming as shown in Figure 2, predicting the gap between supply (4200 billion m3) and demand (6900 billion m3) of freshwater in 2030. A major proportion of this water is used for the agriculture sector and then for the industrial sector. 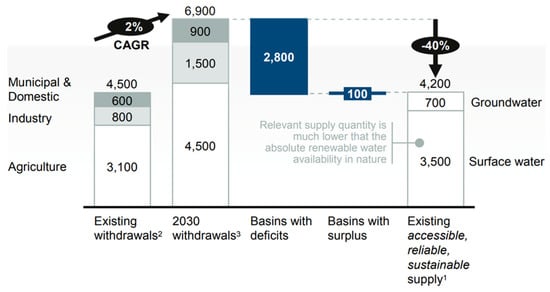 With a growing world population, an ever-increasing demand for food production and potable water is questionable. The agriculture sector requires a surplus amount of water for irrigation. To avoid water scarcity issues, the reuse of wastewater is tremendously increasing across the planet. Reusing wastewater is a sustainable strategy to manage natural water resources [15] . However, the use of untreated wastewater for irrigation is a usual practice in developing countries causing serious threats to the ecosystem as well as human health. Specifically, carcinogenic pollutants pose a solemn threat to agricultural land, irrigated with industrial effluent without any treatment [16].

The whole world stands as a witness to unintended repercussions caused by rapid industrialization. The wastewater generated from industrial sectors has pronounced effects on humans as well as landmass fertility. Some industrial estates have operational wastewater treatment plants but unfortunately, they cannot handle a large proportion of industrial effluent. To meet the international standards of wastewater discharge, suitable technologies are required for wastewater treatment before discharging to streams. It could help to reduce the burden on freshwater resources by reusing treated water in various industrial processes. Due to the widely used application of nanotechnology, challenges, and opportunities of using engineered nanomaterials (ENMs) in wastewater treatment is a matter of endless concern. Based on the wastewater standards, a technique using TiO2 NPs for resilient pollutants in the context of wastewater treatment has become popular in recent years. Up to date, TiO2 NPs have drawn attention over other photocatalysts in every field of life. Over the last few decades, TiO2 NPs with high photocatalytic efficacy has been tested to reduce the pollution load from various industrial units. The conventional wastewater treatment methods mostly come up with high costs as well as lower efficiencies. However, the advantages of the use of TiO2 NPs (non-toxic, inexpensive, stable, and reusable NPs) appeared as a promising strategy to save the environment from pollution.

3. Impacts of TiO2 NPs in the Agro-Environment

In agro-environment, soil is the main and complex matrix in which analyzing the fate of TiO2 NPs is a challenging task. Furthermore, the impacts of TiO2 NPs are difficult to measure in the soil due to the high geogenic background of Ti (≈0.6% of the terrestrial crust). Up until now, modeling studies had helped to estimate the approximate amount of TiO2 NPs that is accumulating in the environment. According to recent forecasts, TiO2 NPs sludge treated soils (with 45,000 tons) were observed to be the largest sink for NPs release among different environmental compartments [4]. The crop plants served as an entry route for NPs’ uptake into the food chain. Presently, there are limited data available about these NPs interactions within the soil matrix. As nanotechnology is emerging in the field of agriculture sector in terms of growing global food production, nutritional contents, quality, food safety, and security [17]. Besides all these aspects, there are several other applications of NPs in agro-environments such as food processing and production, nano-fertilizer, nano-pesticides, etc. but the important concern arises here is the fate of these NPs.

Scientists have investigated the effects of TiO2 NPs on the soil–plant continuum and have observed diverse impacts based on different characteristics of NPs, plant species, experimental conditions, and exposure period. For example, Figure 3, shows the TiO2 NPs effects on plants with respect to different stages, concentration range, and exposure time. In a recent study, experiments were conducted on growth-promoting rhizobacteria (PGPR) inoculation with and without TiO2 NPs in peat soil under the three stress situations. TiO2 NPs were reported to enhance the performance of growth-promoting rhizobacteria which further promotes the solubilization of insoluble phosphates [18]. A grassland soil was treated with TiO2 NPs at the rate of 0, 500, 1000, and 2000 mg kg−1 of soil. These NPs were observed to negatively affect the soil bacterial communities after 60 days of exposure [19]. TiO2 NPs effects on several bacterial taxa were also studied using incubated soil microcosms having concentrations range of TiO2 NPs 0, 0.5, 1.0, and 2.0 mg g−1 soil. Of the identified taxa that exist in all samples, 9 taxa were found to be positively correlated with TiO2 NPs, 25 taxa were negatively correlated whereas 135 taxa were not affected by TiO2 NPs [20]. In another study, TiO2 NPs effects were investigated at concentrations ranging from 0.05 to 500 mg kg−1 dry soil on different bacterial communities. The abundance of ammonia-oxidizing archaea was reported to decrease by 40% in response to TiO2 NPs whereas Nitrospira was not affected at all. Furthermore, the abundance of ammonia-oxidizing bacteria and Nitrobacter were also reported to reduce due to TiO2 NPs treatments [21].