Salt bridges are interactions, electrostatic combined with hydrogen bonding, between oppositely charged residues, typically carboxylic acid anions and ammonium ions, provided they are close together.  For an illustration see Fig. 1. Salt bridges are of particular interest in proteins and other biomolecules.  In the present contribution salt bridges are investigated by means of 1H chemical shifts, determination of pKa values and deuterium isotope effect on 15N and 1H chemical shifts.  In the latter case model compounds like ammonium ions are also investigated and the use of deuterium isotope effects on chemical shifts are supported by Density Functional Theory (DFT) calculations.  The use of isotope effects on chemical shifts enables a distinction between salt bridges observed in the solid state by X-ray diffraction and those actually present in solution.

Salt bridges may contrilbute to protein stability.  They may occur both in the interior and at the surface.

Salt bridges have traditionally been investigated by measuring changes in pKa values, the mutation approach, X-ray studies of crystalline samples.  These techniques are reviewed. [1]

Figure 1.  Typical salt bridge between aspartic acid and lysine.  The aminoacids may typically be part of different strands of proteins

A classic case is that of Bovine Pancreatic Trypsin Inhibitor (BPTI) in which the terminals (the C- and the N-terminal) forms a salt bridge in solution, but not in the crystal state. This was demonstrated early on by Wüthrich and co-workers. [2] The pKa values of e.g. can also be determined by NMR.  In that case an increase of the pKa value is expected. For the lysines of protein G B1 domain this was not found in line with the finding (see later), that no salt bridges with lysines exist is this protein in solution. [5]

The formation of a salt bridge in the complex between dihydrofolate reductase and methothrexate, brodimoprim 4-carboxylate or brodimoprim-4,6-dicarboxylate was established between the ligand and Argine 57 based on the finding of a higher NH chemical shift for those NH protons being part of the salt bridge compared to those not. [6]

4. Use of Isotope Effects on Chemical Shifts to Study Salt Bridges 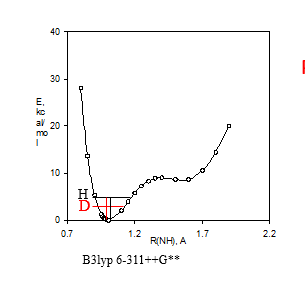 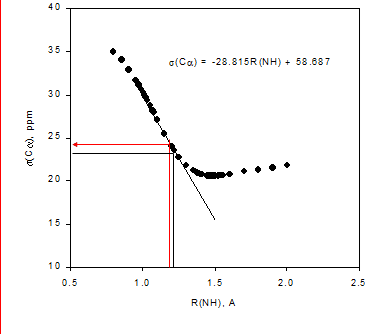 4.2. Use of model compounds

Ammonium ions are a close analogue of e.g.the side chain of protonated lysine.  It was shown that one-bond deuterium isotope effects on 15N chemical shifts, 1ΔN(D), depended strongly on the counter ion, the counter ion concentration and the smallest 1ΔN(D) were found in very dilute solutions Fig. 4.  A similar picture was seen for 2ΔH(D).  [8] 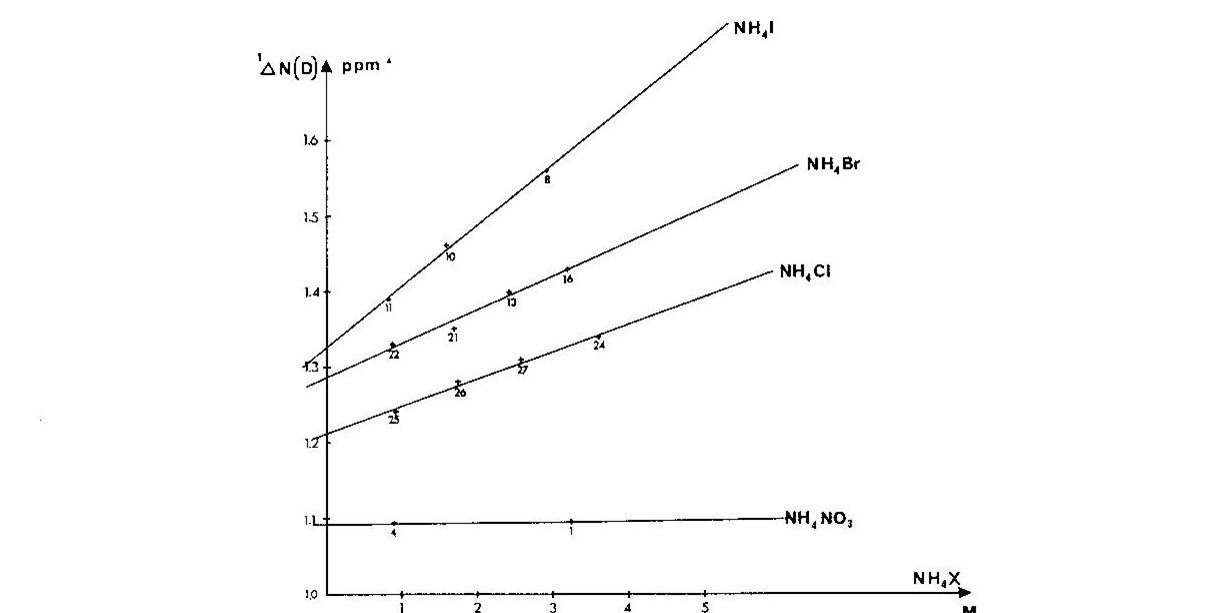 Figure 4.  Plot of  one-bond deuterium isotope effects on 15N chemical shifts vs. concentration of ammonium salt.  Taken from Ref. 7 with permission from the Danish Chemical Society

Furthermore, if the counter-ion was far away, ammonium ion buried in a cryptand like SC-24, no effect of the counter ion was found. [9]   In addition, a solid state study showed that 1ΔN(D) decreases as the heavy atom distance decreases [10] and this was confirmed by theoretical calculations. [11] To sum up, 1ΔN(D) will be smaller, if a salt bridge is present, whereas 2ΔH(D) will become more negative.

Salt bridges can both be "buried", in the inner part of the protein, or sovent exposed at the surface.  Exchange of the NH protons can occur.  A useful pulse sequence to overcome exchange problems is , HISQC  [12]A typical spectrum is seen in Fig. 5. 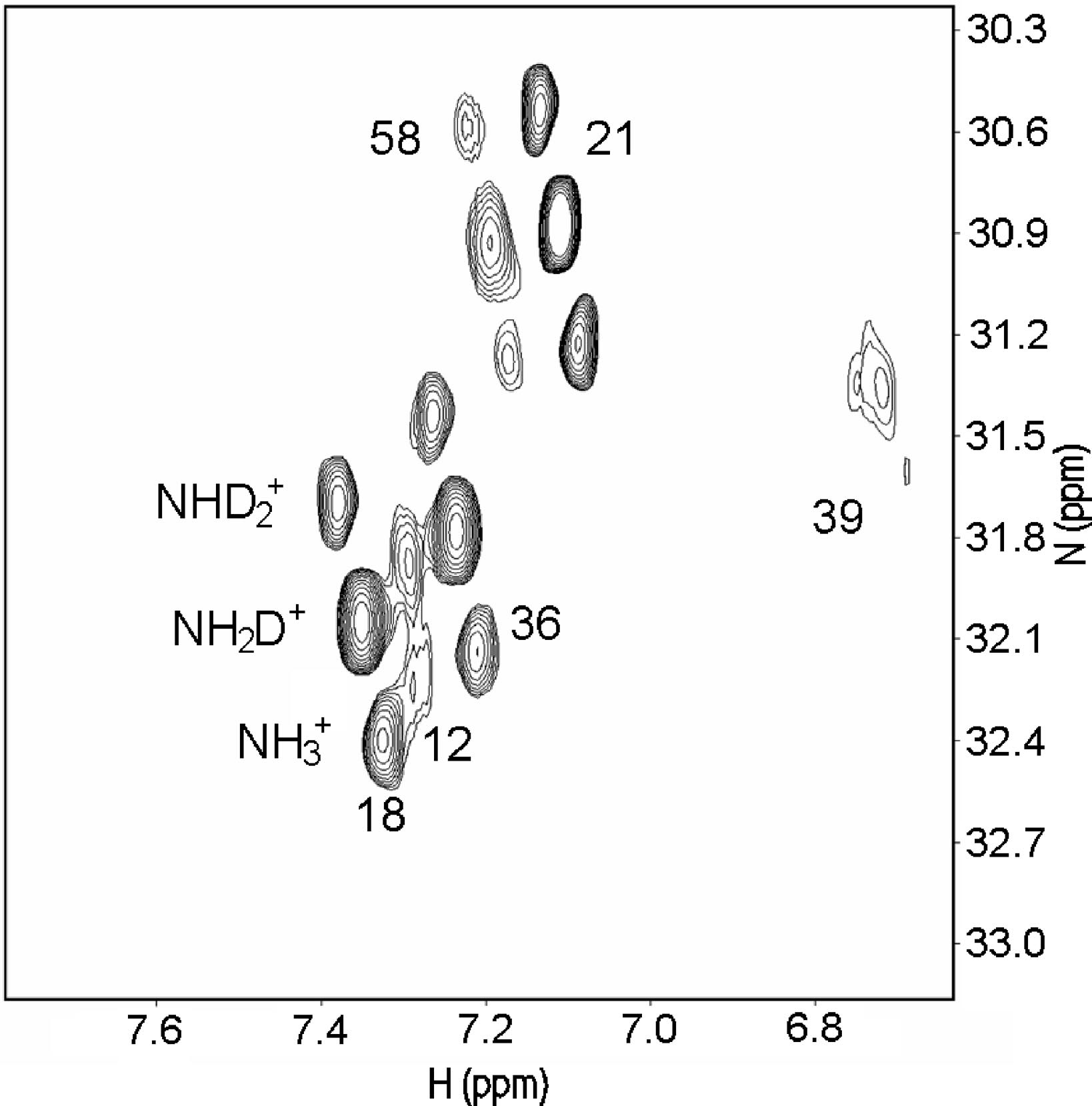 From Fig. 5 as well 1ΔN(D) as 2ΔH(D) isotope effects can be measured.  The isotope effects turned out to be very similar for both what the crystal structure had indicated could be salt bridges and those not. So the conclusion as seen in Fig. 6 is that no salt bridges is to be found in protein G B1 domain. 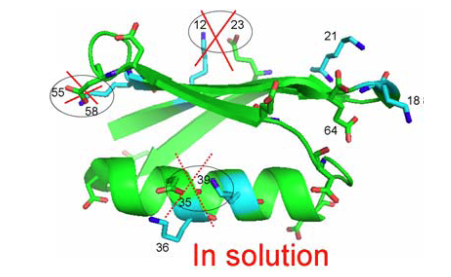 Figure 6.  Crystal structure of  protein G B1 domain.  The three salt bridges 35-36, 55-58 and 12-23 are crossed over as they do not exist in solution.  From Ref. 5 with permission from the American Chemical Society

Iwahara et al. [12] demonstrated a salt bridge between lysine side-chains and the phosphate groups of DNA in the homeodomain-DNA complex also observing a 1ΔN(D). 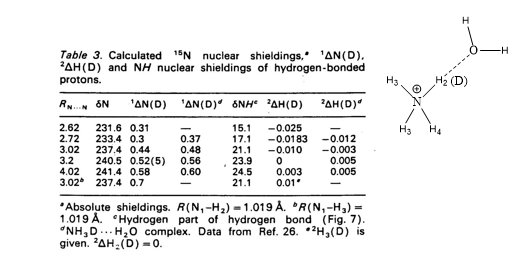 Table 1.  1ΔN(D) and 2ΔH(D) of deuteriated ammonium ion  complexed either with ammonia or water molecule (figure).  Taken from Ref. 8 with permission from the Danish Chemical Society.

From Table 1 it is seen that 1ΔN(D) decreases as either ammonia or water is moving closer to the ammonium and for 2ΔH(D) even a change in sign is seen.  This approach has also been used for protein G B1 domain. [5]  A more recent approach is to calculate isotope effects by a direct treatment of the H/D effect using a multicomponent ab initio molecular orbital method. [16]