Asexual Epichloë are obligate fungal mutualists that form symbiosis with many temperate grass species, providing several advantages to the host. These advantages include protection against vertebrate and invertebrate herbivores (i.e., grazing livestock and invertebrate pests, respectively), improved resistance to phytopathogens, increased adaptation to drought stress, nutrient deficiency, and heavy metal-containing soils. Selected Epichloë strains are utilised in agriculture mainly for their pest resistance traits, which are moderated via the production of Epichloë-derived secondary metabolites. For pastoral agriculture, the use of these endophyte infected grasses requires the balancing of protection against insect pests with reduced impacts on animal health and welfare.

Microbial endophytes, primarily comprising archaea, bacteria, fungi, or viruses, are associated with most plant species [1][2]. The term ‘endophyte’ was derived from the Greek words ‘endon’ (within) and ‘phyton’ (plant) [3], and initially included both pathogenic and beneficial microorganisms [4]. However, the term endophyte has now become synonymous with mutualism in reference to microbes that spend all or part of their life cycle within the plant host while causing no apparent disease symptoms [5][6], and provides a net benefit outcome to both itself and the host plant [7].

Asexual Epichloë endophytes (previously belonging to the taxonomic genus Neotyphodium [8]) were identified in the 1980/90s as the cause of two economically important diseases that affected livestock that grazed fescue in the USA and perennial ryegrass in New Zealand, namely fescue toxicosis [9] and ryegrass staggers [10], respectively (Figure 1). These obligate symbionts are mutualistic, relying on the host plant for their growth, survival, and transmission through hyphal colonisation of the host’s seed [11]. These endophytes exhibit a degree of host-specificity within the cool-season grasses of the Pooideae, whereby Epichloë species are naturally restricted to a host grass genus or closely related genera within a grass tribe [12][13][14]. Asexual Epichloë spend their entire life cycle within the plant host growing systemically within shoot tissues between plant cells [15][16][17] (Figure 2). However, their bioactivity towards certain pests in the rhizosphere [18] can be attributed to the mobility of fungal secondary metabolites in the roots, produced during the symbiosis, within the plant vascular system [15][16]. 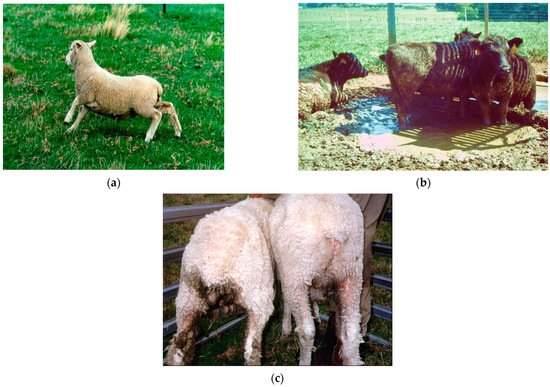 Epichloë-derived secondary metabolites protect the host plant from herbivores—both vertebrates and invertebrates. However, the effect on ruminants and several non-ruminants including horses, camels, white rhinoceros, and alpacas [19] can be detrimental and, when first discovered, removal of these endophytes from grasses was considered the best solution. However, in many temperate regions of the world, such as New Zealand, these Epichloë endophytes are essential for pasture persistence. Novel endophyte strains have now been identified and commercialised that provide the host grass with tolerance/resistance to pests, diseases, and some abiotic stresses while reducing or eliminating the debilitating animal health and welfare issues [20]. These endophytes can be transferred between plants through artificial infection [21].

Epichloë fungi are found in the Clavicipitaceae family [22]. As a result of taxonomists being required to have a single genus name for all stages of the development of a fungal species [23], the Epichloë genus contains both sexual (teleomorph) and asexual (anamorph) forms. The latter had previously been classified as Neotyphodium [8]. More than 100 cool-temperate grass species host Epichloë, with the majority originating from Europe and Asia, and with many fewer from Australasia, sub-Saharan Africa, and South America (Table 1).

Asexual Epichloë strains are either hybrid as a result of a cross between two or more species, or are non-hybrid [14][24]. While all hybrid types are asexual, those classified as non-hybrid types are also incapable of sexual reproduction [25][26]. Compared with other fungal genera, Epichloë has the greatest number of interspecific hybrids [27].

Table 1. Epichloë species found in different grass genera across a range of territories.

In planta, asexual Epichloë spp. complete their entire life cycle within the host plant’s tissues (Figure 3). Dissemination of Epichloë to the next plant generation occurs through vertical transmission of fungal hyphae via the seed of the host plant [51] and is moderated by the compatibility of the endophyte strain with the host’s genetics. Asexual Epichloë generally do not produce spores except when grown axenically within a laboratory environment [52]. 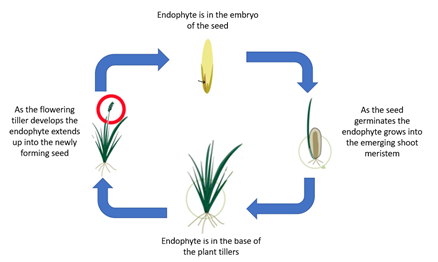 Figure 3. Schematic diagram of the asexual Epichloë endophytic life cycle in cool-season grasses of the Pooideae.

When used in managed pastoral ecosystems, viability of the endophyte in seed can be threatened if the seed is stored at ambient temperatures and humidity [53]. However, storage of seed with a moisture level below 8% at temperatures below 5 °C and relative humidity of less than 30% will ensure long term endophyte viability [54].

2.3. Secondary Metabolite Bioactivity and its Consequences

The impact of Epichloë in natural and agricultural ecosystems is largely driven by chemistry. The genome of the endophyte strain determines the types (quality) of secondary metabolites expressed, but the host plant genome largely regulates the amount (quantity) [55][56]. Considerable information is known about four types of these secondary metabolite compounds (Figure 4) [55][56][57]:

Seasonal climatic effects can also have an overriding effect on the concentrations of secondary metabolites expressed [58][59][60]. These tend to be higher in the warmer drier periods of summer and autumn and lower through the cooler winter period (Figure 5). 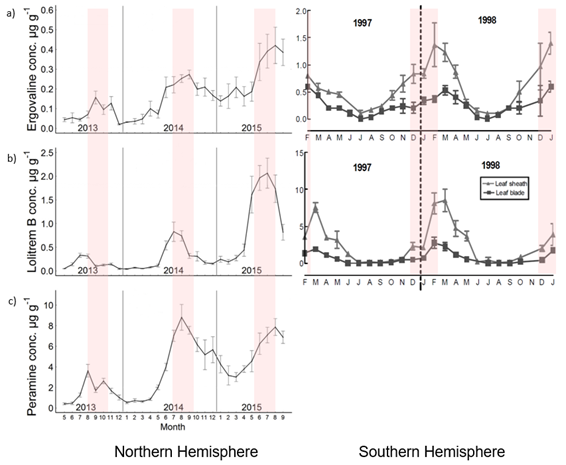 Figure 5. Seasonal trends in expression of ergovaline (a), lolitrem B (b), and peramine (c). Red shaded area represents summer months for the Northern and Southern Hemisphere. Figures modified from Fuchs et al [61] and Watson et al [62].

Secondary metabolite distribution within the plant can vary with compounds and among host species. In ryegrass, ergovaline is concentrated in the stem and basal leaf sheath of intermediate aged tillers, lolitrem B accumulates in older tissues, and peramine is distributed evenly across all leaf tissues [63]. In meadow fescue, lolines are found in both shoot and root tissues [64].

The mode of action of secondary metabolites against insect pests continues to be understood as new endophyte strains are discovered and improved control of insect pests is achieved (Table 3).

Table 3. Mode of action of Epichloë secondary metabolites against invertebrates.

However, there are also many unidentified secondary metabolites that are known to exist through bioactivity against invertebrates that cannot be attributed to known chemistry. In addition, Epichloë endophytes boost the jasmonic acid pathway, which in turn, enhances the host plant’s immunity to chewing insects [132]. Grass emitted volatile organic compounds triggered by an aphid infestation can also be enhanced through Epichloë endophyte infection [133]. These volatiles have been shown to attract syrphid flies, which are natural enemies of aphids [134].

2.4. Application and Value to the Pastoral Industry

In a pastoral agriculture context, Epichloë endophytes are essential for temperate grass persistence in New Zealand, Australia, the USA, South America, and, to a lesser extent, Europe [135]. The absence of an Epichloë endophyte or use of an inappropriate strain can result in complete pasture loss, as shown in a comparative trial in the Waikato region of New Zealand (Figure 6). However, to ensure the disadvantageous impacts of Epichloë on animal health and welfare are minimised, strains of endophyte that do not express those secondary metabolites at levels causing these issues have been identified, isolated, and then re-inoculated into high yielding plant germplasm [72][136]. This has resulted in several novel Epichloë strain-host associations being commercialised [137][138][139][140][141][142]. Table 4 summarises the performance of these commercialised strains and their known chemistry. 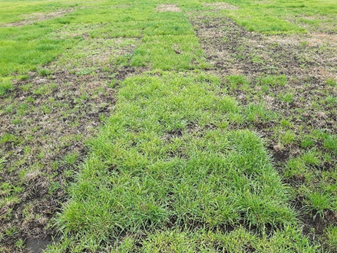 Figure 6. The loss of persistence due to insect pests and drought on ryegrass with either no Epichloë endophyte or an ineffective strain on ryegrass persistence in the Waikato region of New Zealand.

The economic benefit of some of the more widely commercialised strains has been estimated. For example, the value to the New Zealand economy from AR37 has been calculated to be NZ$3.6 billion over the 20-year life of its patent [157]. In the USA, the positive financial benefits of MaxQ tall fescue have been demonstrated for beef cows, calves, and feeder cattle farming systems [158][159] and sheep farming systems [160].

3.1. Application to the Turf Industry

For grassed areas such as airports, children’s playgrounds, sports turf, and parks, which exclude domesticated grazing animals, Epichloë endophytes that produce deterrent secondary metabolites such as ergot alkaloids, lolitrem B, and lolines have been deliberately used to discourage herbivores such as rabbits, granivorous birds, and rodents [161][162][163][164][165].

While Epichloë endophytes are not naturally found in modern cereals such as wheat (Triticum aestivum), barley (Hordeum vulgare), oats (Avena sativa), or rye (Secale cereale), they are found in wild grasses related to these species, namely from the genera Elymus and Hordeum [166]. Research has set out to determine whether Epichloë can provide the same benefits to cereals as they do to temperate grasses. Artificial inoculation of Epichloë strains from wild grasses into wheat and rye can result in stunted or dwarf phenotypes due to compatibility issues [167]. However, in outbreeding rye, the range of phenotypes can result in normal phenotypes, which, in the field, provide the host plant with increased fungal pathogen resistance and improved yields under some managements [168], and reduce damage from a range of insect pests [169][170]. In wheat, inoculations have been possible through using Chinese spring wheat addition lines [171].

The mutualistic relationship between asexual Epichloë spp. and cool-season grasses is critical for the maintenance of temperate grass based pastoral agriculture in several countries. While it remains more of a biological curiosity in Europe, where this mutualistic association evolved between Epichloë and the host species of Lolium and Festuca, it is essential in many countries where these grasses were introduced due to the prevalence of both introduced and endemic insect pests and pathogens, and the compounding effect of drought and heat [72][103]. Changes in climate, management, and further pest incursions will continue to challenge the persistence of cool-season grasses making the reliance on the mutualism with Epichloë even more important. The ongoing search for novel endophytes with beneficial chemistry continues, but can now be supplemented with the use of new techniques such as gene editing to design endophyte strains for specific biotic and abiotic challenges [172][173]. The ultimate outcome will be the delivery of natural biocontrol options to protect grasses from pest and disease challenges, without the use of synthetic chemistry, and improve yield in drought conditions.