In a report by WHO (2014), it was stated that antimicrobial resistance is an arising challenge that needs to be resolved. This resistance is a critical issue in terms of disease or infection treatment and is usually caused due to mutation, gene transfer, long-term usage or inadequate use of antimicrobials, survival of microbes after consumption of antimicrobials, and the presence of antimicrobials in agricultural feeds. One of the solutions to this problem is antimicrobial peptides (AMPs), which are ubiquitously present in the environment. These peptides are of concern due to their special mode of action against a wide spectrum of infections and health-related problems. The biomedical field has the highest need of AMPs as it possesses prominent desirable activity against HIV-1, skin cancer, breast cancer, in Behcet’s disease treatment, as well as in reducing the release of inflammatory cells such as TNFα, IL-8, and IL-1β, enhancing the production of anti-inflammatory cytokines such as IL-10 and GM-CSF, and in wound healing properties. This review has highlighted all the major functions and applications of AMPs in the biomedical field and concludes the future potential of AMPs.

Microorganisms can be useful or hazardous, and some microbes show unrecognizable effects. Microbes with beneficial effects are important and are utilized for CO2 fixations, the degradation of complex organic compounds into basic molecules, fermentation, and many more applications. Furthermore, microorganisms can have a harmful effect, causing infections or diseases such as anthrax, conjunctivitis, ringworm, influenza, and many more [1]. Treatment of such health issues caused by microbes can be performed by appropriate diagnosis followed by adequate medication or therapy [2]. Antimicrobial compounds are considered a convenient solution for such health issues and can be of low molecular weight (LMW) or high molecule weight (HMW). Diverse relationships have been observed between the molecular weight and antimicrobial activity of these compounds. However, the majority of researchers report an increase in antimicrobial activity with the decrease in the degree of polymerization (i.e., molecular weight) [3]. It is expected that the adhesion of HMW antimicrobial polymers to a negatively charged bacterial cell membrane should be highly effective in comparison to the adhesion of LMW antimicrobial polymers. Instead, contradicting results are found, according to which LMW antimicrobial polymers have greater biocidial activity [4]. Usually for bacterial infections, antibiotics are the most commonly used drug for treatment, which show adverse effects such as reducing immunity, increasing susceptibility to infections, and developing resistance against antimicrobial agents [5].
Excess use of antibiotics results in antimicrobial resistance, which has devastating effects. This has led to the increase in demand for low molecular weight antimicrobial peptides, which are effective against antimicrobial-resistant bacteria [6].
Antimicrobial peptides (AMPs) are short-chain (5 to 100) amino acids that possess the ability to counter microbial attacks or any infective agent in all living organisms [7]. AMPs act as the first line of defense to disrupt bacterial, fungal, yeast, viral, and even cancer cells [8]. Most AMPs are found to be cationic, and are considered promising agents due to their distinctive mode of action and the inability of microbes to develop resistivity against them [9][10]. However, some of the AMPs are also anionic in nature due to the acidic polar residues, and these consist of short Asp-rich sequences [11]. More than 2500 AMPs are present in nature, which are broadly grouped into four categories: α helical, β sheet, extended, and αβ mixed antimicrobial peptides [12][13]. α helical AMPs possess a distance of about 0.15 nm between two adjacent bond angles (for example, LL-37) [14]. The β Sheet peptides are rigid structures that are more organized in an aqueous solution and do not show conformational change on membrane linkage (for example, Gomesin) [15]. Extended peptides comprise a high amount of arginine, tryptophan, proline, and/or histidine residues (for example, indolicidin and α1-purothionin) [16][17][18]. On the basis of activity, AMPs can also be classified as antimicrobial, antiprotozoal, anticancer, insecticidal, and antiparasitic [19]. AMPs can be harvested from invertebrates, vertebrates, and plants [20]. The first AMPs derived from certain sources were as follows: Cecropin from Hyalophora cecropia [21], defensis from rabbit [22], purothionin from wheat flour [23], and Gramicidin D from Bacillus brevis [24]. Among all the sources, some of the most valuable sources of AMPs with future prospects are marine animals [25], wild plants and weeds [26], and the black soldier fly [27].
Similar to AMPs, a group of polymers exists, known as synthetic antimicrobial oligomers, which are cationic and amphiphilic in nature [28]. These antimicrobial agents are fabricated to imitate AMPs [29]. However, these oligomers have a drawback of heterogeneity and innate toxicity [30]. Thus, antimicrobial peptides have the advantage of low toxicity over the synthetic antimicrobial oligomers and are highly effective in microbial disruption [31]. Recent studies have shown the impactful results of using AMPs in the biomedical sector. This article is different from various other papers on AMPs because it not only includes information about the factors affecting the functioning of AMPs and their important role, but along with it, focuses on the implementation techniques of AMPs in the biomedical sector. In this review, smart and intelligent delivery methods are also considered. Thus, this review could be helpful for readers that require compact information about the role of AMPs in biomedical applications. The schematic representation of this review is shown in Figure 1. 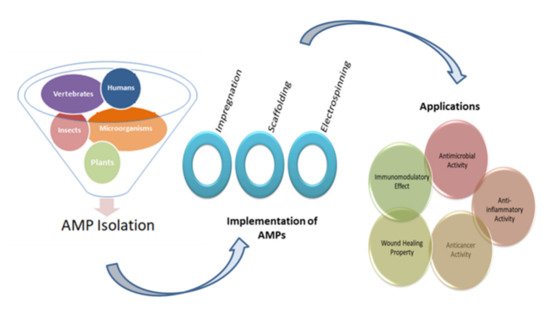 Figure 1. Diagrammatic representation of the five main sources for the isolation of AMPs, three widely used implementation techniques, and their applications.

The incorporation of AMPs into multilayers is the most commonly studied technique because of its ability to reduce the loss of antimicrobial activity and the fact that it requires a low quantity of AMPs [32][33]. The layer-by-layer technique was used to incorporate AMP (nisin Z) into polyelectrolyte multilayers (PEM) made up of chitosan and carrageenan (CAR). This study involved three groups: PEM without AMP, PEM with AMP, and PEM with an AMP/CAR outer layer. Among all the groups, PEM consisting of nisin showed the highest antimicrobial activity against S. aureus and MRSA. During adsorption, some of the nisin Z was lost, and 0.89 ± 0.064 µg cm−2 was retained [34]. Antimicrobial peptides-embedded cotton gauze (18 mm × 18 mm), functionalized with chitosan and alginic acid sodium salt, was examined as a novel method of antimicrobial wound-dressing. This method involved the soaking of cotton gauze in chitosan and alginic acid sodium salt for a 5-min duration. It was then immersed in AMP, followed by washing with deonized water and coating with chitosan. Four antimicrobial peptides were studied: hBD-1, β-Defensin-1, human dermaseptin, Cys-LC-LL-37, and Magainin 1. The lowest MIC was observed for Magainin 1 against S. aureus and K. pneumoniae. The release study recorded the release after 6 h of immersion and also noted that Dermaseptin had the fastest release and Magainin had the slowest among all the samples. It was found that after 24 h, only 75% of AMPS was utilized from the cotton gauzes [32]. Cubosome is a nanoparticle representing a lipid biomimteric environment that has been studied for the incorporation of AMPs [35]. Gramicidin A and alamethicin were incorporated into cubosome (composed of monoolein, monopalmitolein, monovaccenin, and 1-(7Ztetradecenoyl)-rac-glycerol). The range of AMP concentration was considered to be from 0 to 10% and it is observed that with the increase in concentration, cubic symmetry was decreased. The loss of structure can be prevented by using the lipid bilayer, which is approximately equal to the peptide length [36]. Methods of incorporating AMPs into a matrix are shown in Figure 2. 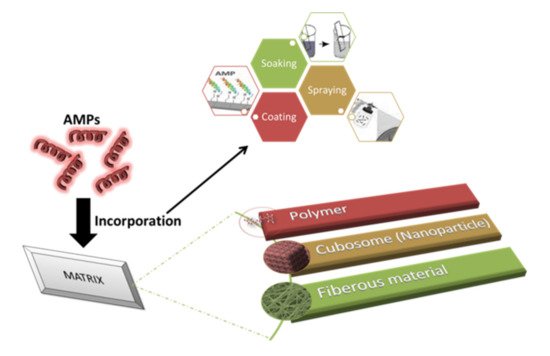 Figure 2. Impregnation of AMPs into compatible matrices. Incorporation of AMPs in a matrix is usually performed via soaking, coating, or spraying. The three common matrices are polymer, cubosome, and fibrous material.

Scaffolding is a three-dimensional porous solid biomaterial that acts as a matrix to hold bioactive compounds [37]. This method can be used to incorporate AMP to obtain the desired features. In an investigation, LL37, melittin, buforin, MM1, AR23, and RV23 were scaffolded in protofibril to study the immunomodulatory potency. All of the AMPs formed square columnar lattices. These scaffolds were incubated with human pDCs and the production of IFN-α was recorded. The results suggest that LL37-dsDNA and buforin-dsDNA stimulate significantly higher production of IFN-α compared to the control. Scaffolding of AMPs in ordered nanocrystalline complexes helps in amplifying the production of cytokines to modulate immunity [38]. Ye prepared a scaffold from intrafibrillar mineralized collagen via the biomimetic technique incorporated with GL13K peptides to treat bone defects. This research involves the study of collagen mineralized for four different durations (1, 2, 4, and 8 days). The morphology suggested that 4 days and 8 days of mineralization led to homogeneity and a high degree of mineralization. Mineralization was more useful in the proper loading of AMP in comparison to non-mineralized scaffolds. The release of GL13K was not observed for up to 14 days, but a drastic release was reported from 21 to 28 days, which may be due to collagen hydrolysis. The hydrophobicity of the scaffold was improved by coating it with GL13K, which suggests stability in the presence of water. GL13K scaffolds, which were mineralized for two days or more, reduced S. gordonii viability in a better way compared to others [39]. Rabanal and a few others developed a scaffold from lipopeptide, which is found to possess improved antimicrobial activity against P. aeruginosa, E. coli, S. aureus, and E. faecalis [40].

Electrospinning is a novel technology that consists of a high-voltage power supply, a syringe, which is the producer of nanofiber from the polymeric solution (includes pump and needle), and a collector surface on which the polymeric solution is coated during the process [41]. Electrospinning is an effective and inexpensive technique used in biological and medical applications, which involves the incorporation of a strong electric field to develop nanofibers [42]. Electrospinning technology is used for biomedical purposes such as electrospun prosthetic heart valves [43]. Shortcomings in such innovations concern microbial deterioration, which can be avoided with the use of antimicrobial agents. Various studies have proved the use of AMPs instead of antimicrobial agents to prevent the risk of infection of electrospun materials [44]. For instance, Cm-p1 is derived from the Caribbean Sea mollusk, which was added in PVA and used in electrospinning a solubilized solution of Cm-p1 with 2.5%, 5%, and 10%, w/v concentrations in 0.5 mL of deionized water. Further, a polymeric solution was prepared by adding 50 g of PVA [45]. This solution is pumped at a flow rate of 0.2 mL.h−1 via a syringe at 15 kV of voltage with a distance of 10 cm between the needle tip and collector. The releasing property of the nanofiber was studied using RP-HPLC and the sustainable release of Cm-p1 was observed for up to 48 h. Only Cm-p1 10%-PVA inhibited C. albinas growth, resulting in a 3.94 mm diameter of the zone. The immune response was studied via the release of cytokines IL-6 and TNF-α by RAW 264.7 macrophages cells. These cytokines had the ability of low induction by Cm-p1 10%-PVA [46]. Similar electrospinning conditions were considered in another study. Pleurocidin in four different concentrations (0.03 wt.%, 0.06 wt.%, 0.12 wt.%, and 0.25 wt.%) was mixed with 12% PVA. PVA with 0.25% pleurocidin inhibited E. coli growth within 5 h of storage. The antimicrobial property in apple cider was also assessed, where results suggest that within 14 days, PVA with 0.25% pleurocidin inhibited E. coli growth to an undetectable level. They concluded that electrospinning is useful in controlling the release of antimicrobial peptides [47]. Figure 3 represents the schematic diagram for the electrospinning process. 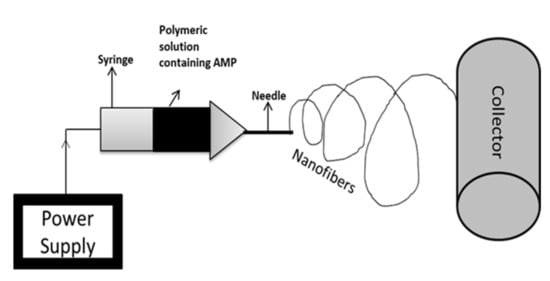 Figure 3. Schematic representation of electrospinning technique. Electrospinning is a nanofabrication method that involves the controlled flow of a polymeric solution placed in a syringe via a needle. The collector is the material on which nanofibers are coated.