The producers of essential oils from the Republic of Moldova care about the quality of their products and at the same time, try to capitalize on the waste from processing. The purpose of the present study was to analyze the chemical composition of lavender (Lavanda angustifolia L.) essential oil and some by-products derived from its production (residual water, residual herbs), as well as to assess their “in vitro” antimicrobial activity. The gas chromatography-mass spectrometry analysis of essential oils produced by seven industrial manufacturers led to the identification of 41 constituents that meant 96.80–99.79% of the total. The main constituents are monoterpenes (84.08–92.55%), followed by sesquiterpenes (3.30–13.45%), and some aliphatic compounds (1.42–3.90%). The high-performance liquid chromatography analysis allowed the quantification of known triterpenes, ursolic, and oleanolic acids, in freshly dried lavender plants and in the residual by-products after hydrodistillation of the essential oil. The lavender essential oil showed good antibacterial activity against Bacillus subtilis, Pseudomonas fluorescens, Xanthomonas campestris, Erwinia carotovora at 300 μg/mL concentration, and Erwinia amylovora, Candida utilis at 150 μg/mL concentration, respectively.

Lavandula angustifolia Mill. (syn. Lavandula vera DC, syn. Lavandula officinalis Chaix ex Vill., syn. Lavandula spica L.) is a perennial evergreen shrub of the family Lamiaceae, native to the Mediterranean region. Nowadays, this species is naturalized almost all over Europe, North Africa, United States, and Australia [1]. L.angustifolia (Lavander) is one of the most valuable medicinal and aromatic plants traditionally used to treat pain, parasitic infections, burns, insect bites, cramps, and muscle spasms [2]. In addition to its application in herbal treatment, lavender is also cultivated for the essential oils used in aromatherapy and the cosmetic, food, and flavour industries [3][4][5].
This is possible due to the presence of a set of biologically active substances, especially in essential oil, which possesses a multidirectional therapeutic activity being used in the treatment of gastrointestinal, cardiovascular, respiratory, and urinary infections [6]. Scientific studies reported anti-inflammatory [7], antioxidant [8][9], sedative [10], cytotoxic [11][12], analgesic [7], antimicrobial [6][13][14], and anticonvulsive [15] properties of L. angustifolia essential oil. Literature data reveal a huge variation in terms of L. angustifolia essential oil content, with values ranging between 0.5 and 6.25% in the case of essential oil obtained from fresh and dry inflorescences [16]. The main constituents of L. angustifolia essential oil are linalool, linalyl acetate, 1,8-cineole, borneol, camphor, lavandulyl acetate, β-caryophyllene, β-ocimene, α-fenchone, terpinen-4-ol, caryophyllene oxide, limonene, pinenes, geranyl acetate, β-farnesene, santalene, lavandulol, camphene, geraniol, and α-terpineol [8][11][13][14][17][18][19][20][21][22][23][24][25][26]. The content of oxygenated monoterpenes prevails in L. angustifolia essential oil and varies between 36.33 and 92.90% [16].
The therapeutic effects of L. angustifolia are also determined by secondary metabolites such as oleanolic and ursolic acids, together with other pentacyclic triterpenes. [27][28]. It has been proven experimentally that both compounds in pure forms, as well as their synthetic derivatives, show multiple biological activities [29][30][31][32][33][34][35][36][37][38].
Some by-products, e.g., pomace or solid residues, that resulted after hydrodistillation of essential oil-producing plants could be considered as a source of biologically active compounds such as ursolic and oleanolic acids. In addition, residual distillation waters have various applications due to their aromatic and antimicrobial properties [39][40][41][42][43].
Antibiotic resistance is becoming one of the main problems of modern medicine since it substantially reduces the effectiveness of antibacterial treatments and is linked to increased patient mortality. As a result, known antibacterial preparations cease to be safe and effective against infections caused by resistant bacteria, leading to increasingly serious cases, including hospital-acquired complications. This requires the discovery of new classes of antibiotics or optimization and a combination of known compounds. However, microorganisms will likely evolve resistance in time and further research and development may be hard to sustain by the pharmaceutical companies. For this reason, studies are being conducted to identify effective remedies against multidrug-resistant strains. Preference is given to natural products among which are the essential oils [44], including lavender [45], or their combination with antibiotics [46]. Still, information about the antimicrobial activity of residual water and ethanolic extracts is very scanty and is mainly related to Lavander hydrosol, which is produced synthetically [47].

Phytopathogenic bacteria can cause various diseases of agricultural plants, especially the genera Erwinia and Xanthomonas. For example, Erwinia amylovora, the Gram-negative bacterium of the Enterobacteriaceae family, is the causative agent of fire blight, a devastating plant disease that affects a wide range of species of the family Rosaceae and is a major global threat to commercial apple and pear production. [50]. Another species, E. carotovora, causes bacterial soft rot in economically important crops, such as potatoes, tomatoes, and cucumbers. In the case of potatoes, the soft rot of the stem and tubers occurs even after harvest, thus considerably reducing the yield [51]. Xanthomonas campestris pv. vesicatoria is a biotrophic Gram-negative bacterium and is the agent that causes bacterial leaf scorch on tomatoes (Solanum lycopersicum L.) and peppers (Capsicum annuum), a disease that is present worldwide. Symptoms of bacterial infection include defoliation and chlorotic necrotic lesions on leaves, stems, fruits, and flowers, which subsequently lead to reduced fruit yield [52].
The species Bacillus subtilis and Pseudomonas fluorescens do not cause any disease to plants but were selected as reference bacteria from the Gram-positive and Gram-negative groups. They are also very suitable as test objects for evaluating the antibacterial activity of the lavender extract. Candida utilis and Saccharomyces cerevisiae are also non-pathogenic but were used as representatives of the yeast-fungus group for evaluating the antifungal activity of the extract.
It should be mentioned that there is a lack of information about any antimicrobial effects of lavender essential oil on E. carotovora, E. amylovora, and C. utilis.
The in vitro assessment of lavender essential oil of Moldovan origin showed good antibacterial activity against both non-pathogenic Gram-positive/Gram-negative bacteria (B. subtilis and P. fluorescens) at MBC of 300 μg/mL and good to high antifungal activity against phytopathogenic bacteria (X. campestris, E. amylovora, E. carotovora) and C. utilis fungi at MFC of 150–300 μg/mL (Table 5).
Table 5. The antimicrobial activity of lavender essential oil.
MBC: Minimal bactericidal concentration; MFC: Minimal fungicidal concentration.
The highest antifungal and antibacterial activities were observed for residual water (RW) at 0.08 and 0.125 μg/mL, respectively. Good antifungal and antibacterial activities were ascertained for the SR extract as well (0.50 and 4 μg/mL). The LPM extract showed moderate antifungal and antibacterial activity (0.75 and 6 μg/mL).
The two techniques employed for testing both the disc diffusion and the dilution methods have been developed to yield accurate measurements of antibacterial and antifungal activities and are routinely used in antimicrobial susceptibility testing.
According to the obtained results, the antibacterial activity was similar but the antifungal activity was slightly different, thus suggesting that the activity against different microorganisms could be caused by different components of the oil.

Univariate as well as multivariate statistical data analysis (SDA) represent one of the most reliable methods that permit extracting useful information and inferring different hypotheses concerning the considered set of data. Given the great diversity of organic compounds which can be found in lavender essential oil, multivariate statistical data analysis was an appropriate method allowing to group samples, in this case, according to the lavender oil producer and based on the concentrations of organic compounds (R mode), or, to classify an experimentally determined organic compound based on the concentration in samples (Q mode) [53][54].
It is worth mentioning that, to avoid any errors induced by missing data, SDA was applied only in the cases of compounds with a non-negligible variation present in all the samples (Table 1), i.e., the compounds which permitted generating the box plots in Figure 1a,b. 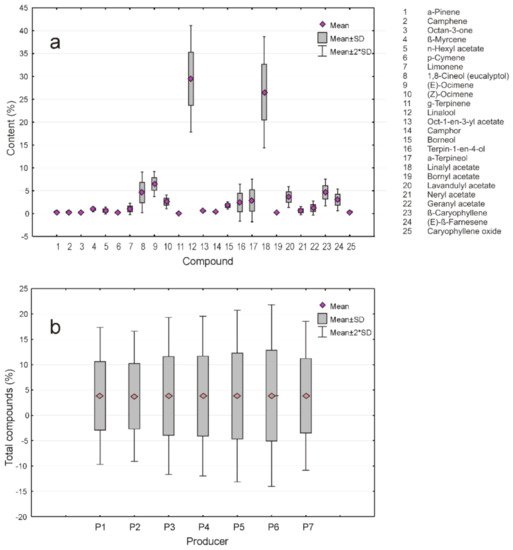 Figure 1. Box plots representing the distribution of (a) 25 components of lavender oil and (b) total content of compounds present in all the samples (producers).
Univariate SDA was useful in establishing the extent to which the samples of lavender oil by the seven producers were similar. This information was obtained by analyzing the box plot shown in Figure 1a. It was observed that all the samples were quite similar. To confirm this, we used more univariate tests, such as one-way ANOVA, Tukey’s pairwise test, Kruskal-Wallis test of equal medians, as well as Mann-Whitney U tests. All of them confirmed that between the lavender oil samples there are no statistically significant differences. For this reason, we have proceeded with multivariate SDA.
Within multivariate SDA, each sample (case) is characterized by independent parameters (variables), so that the final analysis can be performed in R mode (to study relations between samples based on variables) or Q mode (to study the interrelations between variables based on samples). As both methods were based on the same set of samples and variables, R and Q modes could be considered complementary, which significantly enhanced the analysis.
Depending on the situation, cases/variables can be grouped by a multitude of procedures among which covariance and correlation are frequently utilized.
In the case of lavender samples, the best results were obtained by the principal component analysis (PCA) applied in both R and Q modes. With respect to the other two SDA methods, cluster analysis and K mean clustering, PCA permitted evidencing the association of samples, i.e., seven producers of lavender oil in R mode, as well as 25 lavender oil compounds in Q mode. Moreover, in R mode, a tree diagram corresponding to the cluster analysis (Euclidean distances) is, concerning the number and structure of clusters, similar to PCA based on correlation. For this reason, we restrained our SDA to both R and Q mode PCA.
The results, represented by the principal component (PC) 2 vs. PC 1 bi-plots, are illustrated in Figure 2a,b, respectively. In both cases, the PCA was based on correlations between variables (organic compounds, R mode) or samples (lavender oil producer, Q mode). Moreover, the loadings of each variable or sample were represented by Factor 2 vs. Factor 1 bi-plots in the corresponding insets: Variables in Figure 2a and samples in Figure 2b. 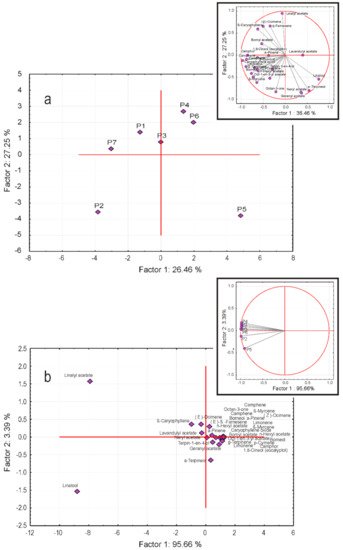 Figure 2. The results of R (a) and Q (b) mode PCA. The insets illustrate the contribution of the corresponding principal component (PC) analysis.
Accordingly, the result of PCA in R mode is illustrated by the bi-plot in Figure 1a. The existence of at least three clusters can be remarked, two of which consist of only one member, i.e., producers P2 and P5, and a third one, grouping the rest of the producers. The bi-plot illustrating the contribution of each compound to the PC1 and PC2 showed a relatively balanced situation, as both Factors 1 and 2 had similar contributions to PC, consisting of 36.46 and 27.25%, respectively. It is worth mentioning that a similar result was obtained by considering the PC3 vs. PC2, which most probably could be explained by their contribution to the total variance, 25.25 and 17.57%, respectively. The corresponding screen plot in Figure 3a illustrated this finding.

Figure 3. The screen plots corresponding to R-mode (a) and Q-mode (b) PCA.
Complementary to the R-mode, a Q mode PC2 vs. PC1 bi-plot, shown in Figure 2b, consisted of three clusters, two of which contained a single organic compound, i.e., linalyl acetate and linalool, while the third one included all other 23 compounds. This result was in good agreement with the composition of the investigated samples, according to which, both linalyl acetate and linalool were characterized by the highest concentrations and variances.
On the contrary, Factor 2 vs. Factor 1 (Figure 2b, inset), except for Producers 2 (P2) and 5 (P5), were nearly coincident and negatively oriented along the first axis, which suggested an almost equivalent contribution to the total variance. This finding may explain the fact that PC1 contributed about 96% to the total variance, as shown in the corresponding screen plot (Figure 3b). In this regard, it is of interest to remark, as mentioned before, that P2 and P5 formed two different uni-component clusters (Figure 2b).