Prostate cancer is a heterogeneous disease, the second deadliest malignancy in men and the most commonly diagnosed cancer among men. Traditional plants have been applied to handle various diseases and to develop new drugs. Medicinal plants are potential sources of natural bioactive compounds that include alkaloids, phenolic compounds, terpenes, and steroids.

1.1. A Brief Overview on Prostate Cancer

Obesity: There is no clear relationship between obesity (body mass index (BMI) >25 kg/m2 [53]) and increased risk of prostate cancer, but it is proven that obese men are at higher risk of advanced prostate cancer and biochemical recurrence [54][55], and also recent studies showed that risk of recurrence in patients who have weight gain after radical prostatectomy (RP) is higher [56]. Risk of advanced prostate cancer is six times higher than for non-obese men [43] and the risk of mortality increases by 20% for every 5 kg/m2 increase in BMI [54]. The importance of this issue is highlighted by the fact that we know that the world’s obese population has at least doubled since 1980 [57] and this can be due to lifestyle changes of patients that have resulted in lower physical activity and higher fat and red meat intake. Physical activity, especially vigorous activity, decreases prostate cancer risk, advance prostate cancer, mortality and recurrence of prostate cancer, and increases survival and it has been shown that physical activity for at least 3 h/week, even jugging and brisk walking, decreases cancer-specific mortality rate [58][59][60]. On the other hand, an inactive lifestyle has been related to higher PSA [60]. Many studies have revealed that higher intakes of fat, red meat, and dairy foods increase the risk of prostate cancer, but it is not proven yet. Dairy products contain a lot of fat and calcium, and high consumption of calcium increases the risk of prostate cancer, and this is probably due to disturbance of the metabolism of vitamin D [61], but non-dairy calcium intake does not change prostate cancer risk [62]. A 2012 study showed that high amounts of red meat and dairy foods elevate the prostate cancer risk 12-fold [63], and there is no specific amount for daily calcium intake, but some studies revealed that consumption of calcium >2000 mg/day raises the risk of prostate cancer [64].
Infectious disease: Infections and chronic inflammation leading to cellular damage and hyperproliferation cause 16% of worldwide malignancies [65] and some studies have revealed that UTI, sexually transmitted diseases and prostatitis could cause the development of prostate cancer via this mechanism, but it is uncertain [40][66]. At present, no specific infectious agent has been proven to cause prostate cancer. However, some evidence for the role of Trichomonas vaginalis in prostate cancer has been shown [67].
Occupational and external exposure: some jobs have a higher risk of prostate cancer due to exposure to specific materials, for example farmers who are exposed to pesticides and other chemical materials have a two times higher risk of prostate cancer [18][68] and also higher exposure to sunlight due to UV and ionizing radiation is related to an increased risk of prostate cancer [69][70].
Smoking: Cigarette smokers have a higher probability of developing prostate cancer, including advanced and hormone resistant forms, spreading metastasis and higher mortality rates and it depends on the amount (pack/year) and duration of smoking and it showed that the risk of mortality and recurrence of prostate cancer in former smoker patients, who quit smoking 10 years before diagnosing prostate cancer is similar to that of non-smoking patients [58]. Some researchers are interested in the association among prostate cancer and alcohol intake, and many studies on this topic have been done, but mixed results were obtained, although one case-control study revealed that heavy drinkers have lower PSA levels and are in higher risk of advanced disease at detection [71][72].
Endogenous hormones: Androgens cause the proliferation and differentiation of the luminal epithelium of the prostate and play a key role in prostate carcinogenesis and establishing cancer, and because of these facts many patients respond to androgen deprivation treatment. For a long time, researchers believed that high serum androgen level was a risk factor of prostate cancer, but the last pooled analysis could not find any link between prostate cancer and serum androgen levels, but it found a connection among sex-hormone-binding globulin serum concentration and cancer risk [73]. Previously estrogens were a choice of treatment in castration-resistant prostate cancer and have been considered as a protective agent for cancer, but recently more studies have presented evidence for a pro-carcinogenic effect of estrogen on prostate cancer and shown that early exposure to estrogens increases the risk of later prostate cancer [74][75]. A pooled analysis in 2008 showed a strong connection between insulin-like growth factor-I and the risk of prostate cancer [76], but epidemiologic studies reviewed in 2011 revealed mixed findings, although they suggested that the insulin-like growth factor axis affects cancer progression rather than initiation [77]. The core genetic changes that cause activation of oncogenes and inactivation of tumor suppressors are responsible for the start and progression of prostate cancer, and epigenetic and structural genomic changes like deletion, chromosomal rearrangement, and amplification that result in gene fusion with new biologic functions are responsible for these changes. Chromatin remodeling, hypomethylation and promotor methylation that cause epigenetic regulation of gene expression play a significant part in the development and evolution of prostate cancer. Androgen receptors (AR) play a key role in prostate cancer, and changes in ARs like amplification, mutations, and ligand promiscuity are determining factors in progressive castrate-resistant prostate malignancies because these changes sensitize the ARs to low levels of intra-tumoral androgen [78]. The basic drivers for the initiation of prostate cancer are based on gene fusions of TMPRSS2 and the ETS family oncogenic transcription factors [79].

Traditional plants have been used to treat and cure various diseases [104], and this has led to increased use of medicinal plants in the search for new drugs from nature [105]. The discovery of new drugs is often established based on the knowledge that plant extracts can be used to treat diseases in humans. The plants are potential sources of natural bioactive compounds that are, but not limited to, secondary metabolites [106]. Cragg and Newman [107] have stated that any part of a plant such as leaves, bark, flowers, and seeds may contain these secondary metabolites. Although little is known of the primary processes of the secondary metabolites in plants, Bodeker [108] reported that secondary metabolites are essential and important in plant use by people. In this regard, herbal medicines, which have been increasingly used in cancer treatment, represent a rich pool of new and bioactive chemical entities for the development of chemotherapeutic agents with many exhibiting favorable side effect and toxicity profiles compared to conventional chemotherapeutic agents [6][109]. In this sense, in the following section the plant extracts and corresponding bioactive constituents with anti-prostate cancer potential are carefully described. Lastly, a special emphasis on clinical studies confirming the plant-derived phytochemicals anti-prostate cancer potential is also given. 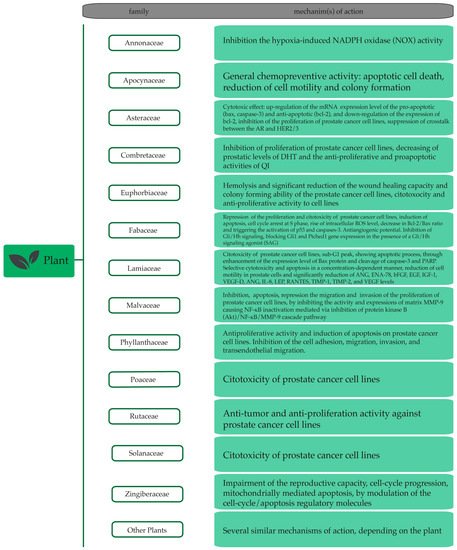 +: Showed in vitro or in vivo antiproliferative effect; -: Not found.

Many classes of metabolites isolated from medicinal plants have been reported for their activity against prostate cancer, namely alkaloids, phenolic compounds, and terpenoids (Table 4).
Table 4. Plant derived-compounds with anti-prostate cancer effects.