Natural killer T (NKT) cells, a small population of T cells, are capable of influencing a wide range of the immune cells, including T cells, B cells, dendritic cells and macrophages. NKT cells can influence the status of the innate and adaptive immune systems because they secrete huge amounts of Th1 and Th2 cytokines. Earlier, the NKT cells were characterized by the NK and T cell properties as they express the natural killer (NK) cell lineage markers and αβ T-cell receptor (TCR). NKT cells are more appropriately defined as “CD1d-restricted and TCR-αβ positive T cells”. In mice, the NKT cells constitute about 0.2–2.0% of lymphocytes in the blood, spleen, bone marrow and thymus, and about 15–35% of total lymphocytes in the liver. On the other hand, the levels of NKT cells are lower in humans, comprising about 0.04–1.3% of circulating lymphocytes in the blood, spleen and bone marrow. They make up about 0.001–0.01% of lymphocytes in the thymus and about 1% in the liver. The greater part of the NKT cells, called canonical or invariant NKT cells (iNKT cells) or type I NKT cells have a specific TCR α-chain rearrangement (Vα14-Jα18 in mice; Vα24-Jα18 in humans), associated with limited diverse Vβ chains. Type II NKT cells, also called non-classical NKT cells, are more diverse in TCR α-chain (but some Vα3.2-Jα9, Vα8 in mice) and TCR-β chains (but some Vβ8.2 in mice).

Natural Killer T (NKT) cells belong to a subset of T cells that can influence the status of the innate and adaptive immune systems because they secrete huge amounts of Th1 and Th2 cytokines (Figure 1) [1]. Earlier, the NKT cells were characterized by the NK and T cell properties as they express the natural killer (NK) cell lineage markers (NK1.1 or DX5 in mice and CD161 in human) and αβ T-cell receptor (TCR) [1][2]. NKT cells are more appropriately defined as “CD1d-restricted and TCR-αβ positive T cells”. In mice, the NKT cells constitute about 0.2–2.0% of lymphocytes in the blood, spleen, bone marrow and thymus, and about 15–35% of total lymphocytes in the liver. On the other hand, the levels of NKT cells are lower in humans, comprising about 0.04–1.3% of circulating lymphocytes in the blood, spleen and bone marrow. They make up about 0.001–0.01% of lymphocytes in the thymus and about 1% in the liver [3]. The greater part of the NKT cells, called canonical or invariant NKT cells (iNKT cells) or type I NKT cells have a specific TCR α-chain rearrangement (Vα14-Jα18 in mice; Vα24-Jα18 in humans), associated with limited diverse Vβ chains (Figure 2). Type II NKT cells, also called non-classical NKT cells, are more diverse in TCR α-chain (but some Vα3.2-Jα9, Vα8 in mice) and TCR-β chains (but some Vβ8.2 in mice) (Figure 2). 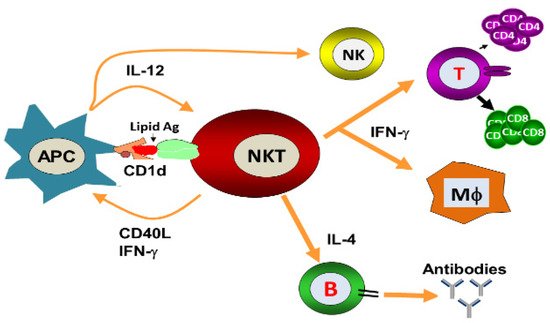 Figure 1. Activation of NKT cells results in the secretion of Th1 and Th2 cytokines. Lipid antigens presented by CD1d activate NKT cells, resulting in the secretion of IFN-γ and IL-4. IFN-γ activates the T cells and macrophages that are important players in cell-mediated immunity, whereas IL-4 acts on B cells and contributes to humoral immunity. 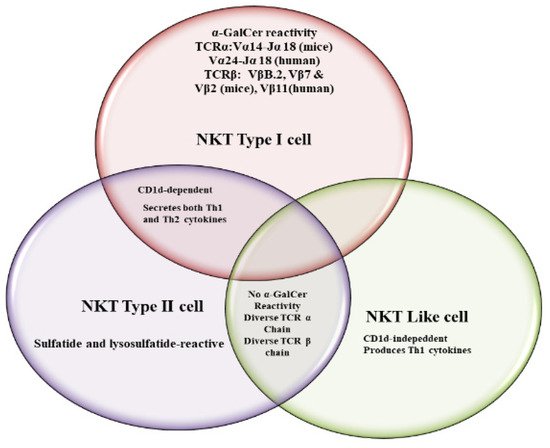 Figure 2. Similarities and differences between different types of NKT cells.

NKT cells are activated by the specific exogenous or endogenous ligands presented by CD1d molecules. The most common exogenous CD1d ligand, α-Galactosylceramide (α-GalCer), was originally extracted from a marine sponge Agelas mauritians [4]. Later on, α-GalCer was also found to be secreted by the two human gut commensals, including Bacteroides vulgatus and Prevotella Capri [5][6]. Glycosphingolipids, from a lipopolysaccharide (LPS)-free bacteria Sphingomonas paucimobilis, activate the NKT cells in a CD1d-dependent manner [7]. Some microbial components such as lipophosphoglycan from Leishmania donovani andasperamide B from Aspergillus fumigatus can stimulate type I NKT cells, whereas sulfatide, lysophosphatidylcholine, lyso-GL-1, phosphatidylglycerol (PG), di-phosphatidylglycerol (DPG), phosphatidylinositol (PI) from Corynebacterium glutamicum, PG and DPG from Listeria monocytogenes and DPG from Mycobacterium tuberculosis can activate type II NKT cells [8][9][10]. Upon activation with specific ligands, NKT cells secrete a copious amount of Th1 (IFN-γ, IL-2 and GM-CSF) and Th2 (IL-4, IL-10 and IL-13) cytokines that act on the cells of the innate and adaptive immunity [11][12].
NKT cells play a very important role against a wide range of pathogens, including viruses, protozoans, bacteria and fungi [13]. The NKT cell ligands have been suggested to be effective immunoadjuvants in the formulation of synthetic vaccines [14]. Taking their immune-stimulatory role into consideration, NKT cell ligands may be very useful in the preparation of vaccine formulation and immunotherapeutics in order to prevent infectious diseases. Since NKT cells have a role in the regulation of the innate and adaptive immune responses, the pathogens try to evade the functioning of NKT cells in order to establish the infection. In the present review, we describe the antiviral roles of NKT cells and also discuss the implications of NKT cell-based nanoparticle vaccines to protect against viral infections.

NKT cells have antiviral potential against hepatitis B virus (HBV), respiratory syncytial virus (RSV), encephalomyocarditis virus (EMCV), Herpes simplex virus-1 (HSV-1), coxsackievirus B (CVB), lymphocytic choriomeningitis virus (LCMV), influenza A virus (IAV) and murine cytomegalovirus (MCMV) [15][16][17][18][19][20]. They constitute an important arm of the innate immune response against viruses and can also regulate the adaptive immune responses by modulating the antigen-presenting cells (APCs). NKT cells exert the direct cytolytic effects and restrict the replication of viruses. Moreover, they can indirectly induce an antiviral state through the secretion of important cytokines. α-GalCer-activated NKT cells reduced the replication of murine cytomegalovirus [20]. Likewise, α-GalCer administration protected the mice against viral encephalomyocarditis [17]. Wu et al. showed that α-GalCer protected the mice against coxsackievirus B3 (CVB3)-induced myocarditis [21]. Johnson et al. demonstrated that NKT cell activation has been shown to induce the expansion of Cytotoxic T lymphocytes (CTLs) response and enhance the immune response against RSV [22]. The activation of the NKT cell resulted in the reduction of the viral load in the pancreas of LCMV-infected mice and this effect was mediated through the secretion of type I interferon [18]. Whereas, α-GalCer-induced activation of NKT cells against HBV was shown to be mediated by IFN-α/β and IFN-γ secretion [15]. However, the antiviral effect of NKT cells against the IAV is mediated through the activation of the innate immune responses [19]. Type I NKT cells exhibited a critical role against IAV infection by increasing IAV-specific CD8+ T cell response and viral clearance [23]. Singh et al. showed that cytokines produced by iNKT cells were associated with non-progressive HIV-I infection and patients had a lower viral load in their plasma [24]. There have been many studies that support the role of NKT cells against viral infections in humans. For example, some patients with mutated adaptor protein SAP (signaling lymphocyte activation molecule-associated protein) were found to be deficient in invariant iNKT cells [25]. These patients have been found to be susceptible to EBV infection. In an another study, patients mutated in the X-linked inhibitor of the apoptosis protein (XIAP) showed the selective reduction in iNKT cell numbers without affecting B cells, T cells and NK cells [26]. The Wiskott−Aldrich syndrome (WAS), a primary immune deficiency disease in humans, has been shown to be associated with an iNKT cell deficiency that impaired the functioning of the innate and adaptive immune systems and therefore predisposed the patients to viral infections [27]. The NKT cells play a very important role in linking the innate and adaptive immunity, their deficiency causes severe immunodeficiency in those persons for whom vaccination with attenuated pathogens is a serious challenge. This was evident from a report that a girl with impaired iNKT cell number and function developed severe respiratory distress after vaccination with the attenuated varicella-zoster virus (VZV) [28].
NKT cells have been actively involved in immune responses against HSV-1 and HSV-2 as NKT cell-deficient mice showed severe HSV-1 infection and impaired viral clearance [29]. The immune evasion strategy of HSV includes the inhibition of NKT cell recognition by curbing the CD1d recycling from the late endosomal compartments to the cell surface [30]. The protective role of NKT cells against RSV was evident from the fact that Cd1d−/− mice infected with RSV showed a poor ability to clear the viral load [29]. MCMV is considered a study model for human cytomegalovirus (HCMV). The iNKT cell activation by MCMV cells requires the involvement of IL-12 and type I interferon, but was independent of CD1d [31]. In an another study, a role of iNKT cells and CD1d has been suggested to counter the MCMV-induced suppression of hematopoiesis in mice [32]. The CD1d-dependent activation of NKT cells plays an important role in resisting EMCV infection because Cd1d−/− mice demonstrated more brutal paralysis due to an acute cytopathic effect of EMCV on neuronal cells [17]. The iNKT cells also played an important role in protecting against IAV because iNKT cell-deficient mice showed more severe bronchopneumonia. The adoptive transfer of iNKT cells before the infection reversed the effect of IAV-induced bronchopneumonia [33].
The NKT cells are found in the highest numbers in the livers of mice and therefore are supposed to play a very important role in understanding the pathology of liver diseases [34]. The activation of NKT cells had a protective role against HBV infection [15][35]. The absence of NKT cells or CD1d in mice resulted in diminished HBV-specific T and B cell responses with delayed viral clearance [36]. Toll-like receptor (TLR) ligands have been shown to activate iNKT cells [37]. Viruses altered the antigen presentation by CD1d through the activation of pattern recognition receptors, such as TLRs. The endosomal TLRs (TLR 3, 7, 8, and 9) are involved in detecting viruses by recognizing the nucleic acid structures [38]. TLR-mediated recognition of viruses may lead to altered CD1d-mediated antigen presentation, thereby affecting the activation of iNKT cells. The role of NKT cells has been extensively reported against viral infections in pigs. The percentage of iNKT cells were increased in the blood, lymph node and broncho-alveolar lavage of pigs upon IAV infection [39]. Renukaradhya et al. demonstrated the role of iNKT cells in the regulation of airway hyper-reactivity [40]. The intranasal administration of NKT cell ligand ameliorated H1N1 IAV infection in piglets [41], while the adjuvant effect of α-GalCer potentiated the immune response of the inactivated HIN1 influenza virus in pigs [42].

4. Evasion of the NKT Cell Functioning by Viruses

Microbial pathogens can cause recurrent or persistent infections by avoiding the onslaught of the normal host immunity. Viruses adopt different strategies to evade both the innate and adaptive arms of the immune system (Figure 3). For example, HIV weakens the immune system by depleting the numbers of CD4+ T cells [43]. Some viruses, such as the herpes virus and Epstein−Barr virus (EBV), have the ability to enter into a latent state. Although the viruses do not replicate in the latent state, they cannot, however, be eliminated and can reactivate themselves to a fully virulent form. Invariant NKT (iNKT) cells have shown an antiviral immunity upon stimulation with α-GalCer against HIV, MCMV, RSV, HBV and influenza virus infections [15][16][17][18][19][20][44]. There has been a reported reduction in the iNKT cell numbers in HIV-1+ patients, particularly a depletion in the CD4+ iNKT cell subset [45]. Moreover, HIV also causes the functional impairment of iNKT cells as the CD4+ and CD4− iNKT cells secrete a lower amount of IFN-γ, TNF-α, and IL-4 in response to α-GalCer/IL-2/PMA stimulation [46]. Viruses have adopted many tactics to avoid the assault by the immune system. For example, HIV-1 reduces the expression of CD1d molecules by increasing its internalization and retains them in the trans-Golgi network. The downregulation in the cell surface CD1d is caused by the interaction of CD1d intra-cytoplasmic tyrosine with HIV-1 Nef protein [47][48]. The CD4+ NKT cells showed greater susceptibility, as compared to conventional CD4+ T cells, to HIV-1 infection owing to the elevated level of CCR5 coreceptor expression on iNKT cells [49]. Fernandez et al. demonstrated an early NKT cell depletion in HIV-infected individuals [50]. Besides, iNKT cells showed their functional impairment as they produced lower levels of Th1 and Th2 cytokines in response to α-GalCer [51]. The functional status of NKT cells is significantly preserved in the long term nonprogressors (LTNPs) as compared to the progressors [24]. 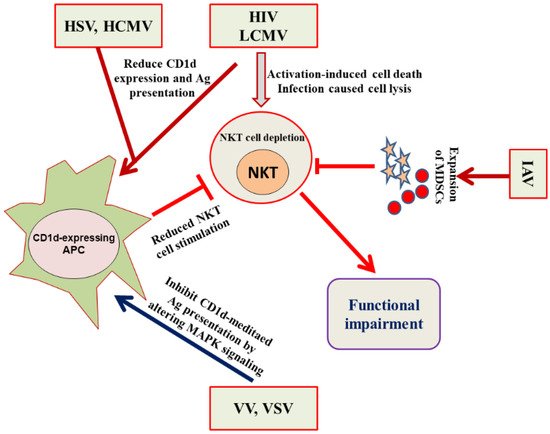