Humic substances are a very important part of our soil.  The topic is description of the structure of humic substances using NMR.  The NMR part is divided into two parts, liquid and solid state NMR.  The assignment of NMR spectra are discussed and the structural elements that can be deduced from the spectral information.  Principal Component Analysis is used as a tool to categorize the information.  Structural models are discussed.

Humic substances have attracted very much attention due to it being the most abundant organic material on earth and because of its vital role for soil properties, as absorber of pesticides and polycyclic aromatics[1] and in that capacity as protector of underground drinking reservoirs.  Humic substances can be classified in three main categories, fulvic acid (water soluble), humic acid (soluble in base) and humins (insoluble).

Considering the complexity of the problem, no simple nor uniform approach can be outlined.  Many different routes have been explored.  NMR of humic substances have been recorded either using solid state NMR or liquid state NMR solvent either heavy water[2] or  DMSO[3].  Does it at all make sense to investigate such a heterogeneous material?  Yes, fulvic acids can clearly be distinguished from humic acids and humin.  Furthermore, humic acids from histosols seems to be very similar all over the world.  Furthermore, Garcia et al.[4]  concludes that HA from histosols (C4 plants) and composted material (C3 pants) are similar.   Humic acids from other sources such as rice paddies[5], ponds and underground water reservoirs[6] or coal sources e.g. Sigma Aldrich humic acid 2 can also be distinguished and described.

No attempt is made in the present text to give a historic overview.  The aim is to give a state-of –the art description.  An excellent review on Solid State NMR of natural organic matter including humic substances[7].  An overview of mainly Russian papers is given by Polyakov and Abakumov[8].

NMR data have to be complemented with other data such as elemental analysis, Infra Red spectroscopy, Mass spectrometry, Size Exclusion chromatography and also titrations to reveal the type and number of titratable protons from mainly phenols and carboxylic acids.  For an example of the latter see Ref.  2.  An indispensable tool is multivariate analysis (see later).

As fulvic acids are water soluble, spectra can be measured in D2O, for humic acids alkaline D2O is needed or DMSO-d6. 3  For humins solid state NMR is necessary, see later.  The use of liquid state NMR has the advantage that it gives sharper lines than solid state NMR, but also that 1H NMR can be studied.  Both 1D and 2D NMR techniques such as HETCOR, HMQC or HSQC[9][10][11][12] been used.  A  correlation between 1H and 13C chemical shifts is obtained, but these parameters shows that the 1H and 13C chemical shifts are largely proportional as has been found in general[13], but in some cases such spectra have proved useful, e.g. in identifying substructures of the aromatic parts of HA and FA [9]. One of the drawback of HMBC spectra is the many resonances.  The extra information of such spectra is to some extent counteracted by the increased overlap (see e.g. Ref. 3).  Also combinations of pulse schemes such as DEPT-HSQC, PSGSE-NOESY, PFGSE-TOCSY and TOE-DE with diffusion editing have been used[14]. The range of 13C resonances is shown in Table “2”.  A typical 1D solution 13C spectrum is shown in Fig. 1.

Figure 1.  Liquid state spectrum of humic acid in D2O. Taken from Ref. 2 with permission from John Willey and Sons.

Fig. 1 shows the ranges based on tabulated data but also more specifically a peak for α-carbon of  amino acids based on a correlation between %N and the percentage of C-α peak.  (see Fig. 2).  Furthermore, the  intensities of resonances at 63 ppm are proportional to those at 75 ppm (Fig. 3) showing that this most likely is C6 (63 ppm) and C2-5 (75 ppm) of a sugar.  However, looking at the signal marked C1, this seems very broad and too intense.  This probably means that aromatic resonances are also present in this area.  A very low chemical shift is obtained for a carbon ortho to two OR substituent and one para OR substituent (chemical shift ~94 ppm).  Obviously, two OR substituents will give rise to a signal a little above 100 ppm. 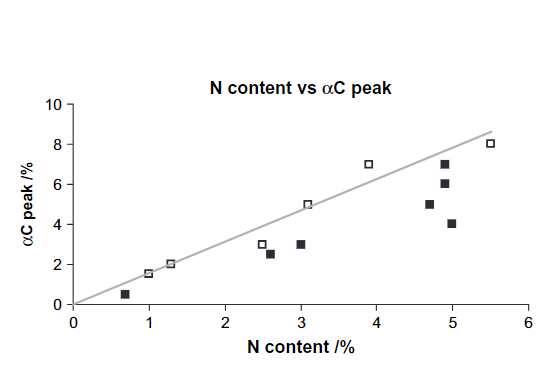 Figure 2.  Plot of the percentage of the C-α peak of amino acids vs. the total nitrogen content.  Taken from Ref. 2 with permission from John Willey and Sons. 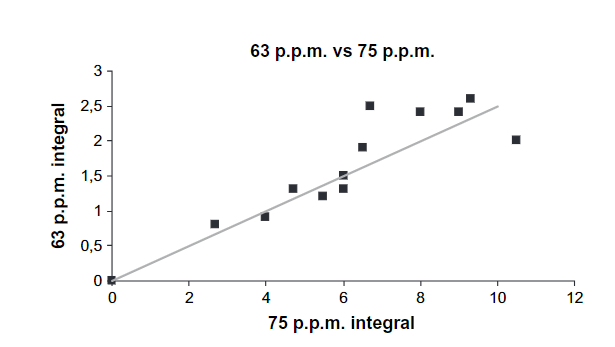 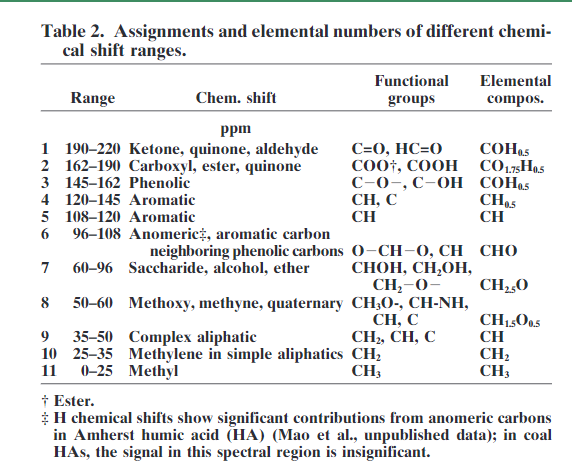 Taken from Ref. [15]with permission from Soil Science Society of America

In complex structures like humic substances, it is very important to have as many selective tools.  One is the quantification of isolated methyl groups as proposed by Lambert and Buddrus. They ended up using a standard spin-echo technique[16].

1H NMR spectra recorded in DMSO-d6 show much sharper lines than those in D2O.  A fine example is shown in Fig. 4.  Based on the COSY spectrum and use of databases a number of lignin like structures could be suggested[17]. 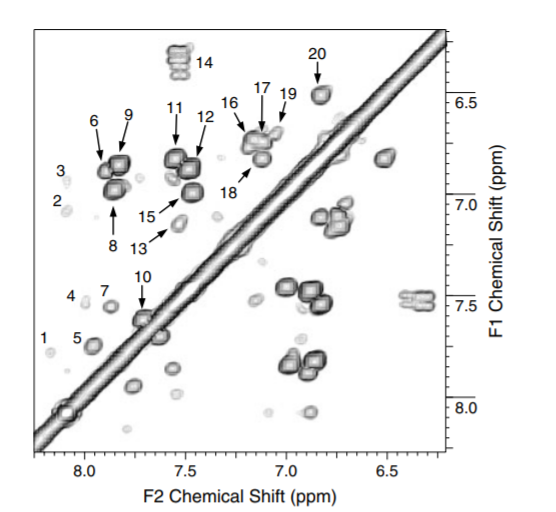 Fig.  4. COSY spectrum of fulvic acid dissolved in DMSO-d6 from Ref. 17 with permission from John Willey and Sons.

NOESY spectra have also shown resonances close to each other yielding information about the overall structure. Fig. 5.   Schemes for identification types of carbons.  Taken from Ref. [18] with permission from Elsevier.

Carbons bound to nitrogen can be detected using the Spider NMR Method.[19][20]  This is demonstrated in Fig. 5 l and m pictures.  It is seen, that one can separate those carbons bonded to H and to N from quaternary carbons bonded to N only.  Some information can be obtained by using a probe e.g. fully deuterium and 13C=O labelled benzophenone[21].

Principle component analysis is invaluable in the characterization of the inherent properties of humic substances.  An example of comparison of humic acids and fulvic acids of different origin is given in Ref. 6.  Another example is seen in Fig.  6 showing how humins fall in a categories of their own[23]. Fig. 6 . Biplot generated by principal component analysis for the functional groups of fulvic acids, humic acids, and humin fractions.  Taken from Ref. 23 with permission from the American Chemical Society.

It is also interesting to see how the simulated spectra (see Modelling) fits with the experimental data as seen in Fig. 7.  In this figure both a series of humic acids (HA) and fulvic acids (FA) are included.  The model for this humic acid is shown in Fig. 10 (see later).  Calculated factor scores for the humic and fulvic acid structural model data are marked with crosses. Fig. 7.  Scatter plots of factor scores for thirteen HS fractions based on CHNSO and 13

C-NMR data.  Taken from Ref. 2 with permission from John Willey and Sons.

Models have been constructed for many years, but not necessarily based on NMR data.  For an overview see Ref[24].  Diallo et al. [11]  constructed an elaborate scheme for construction of structures based on primarily NMR results, see Fig. 8. 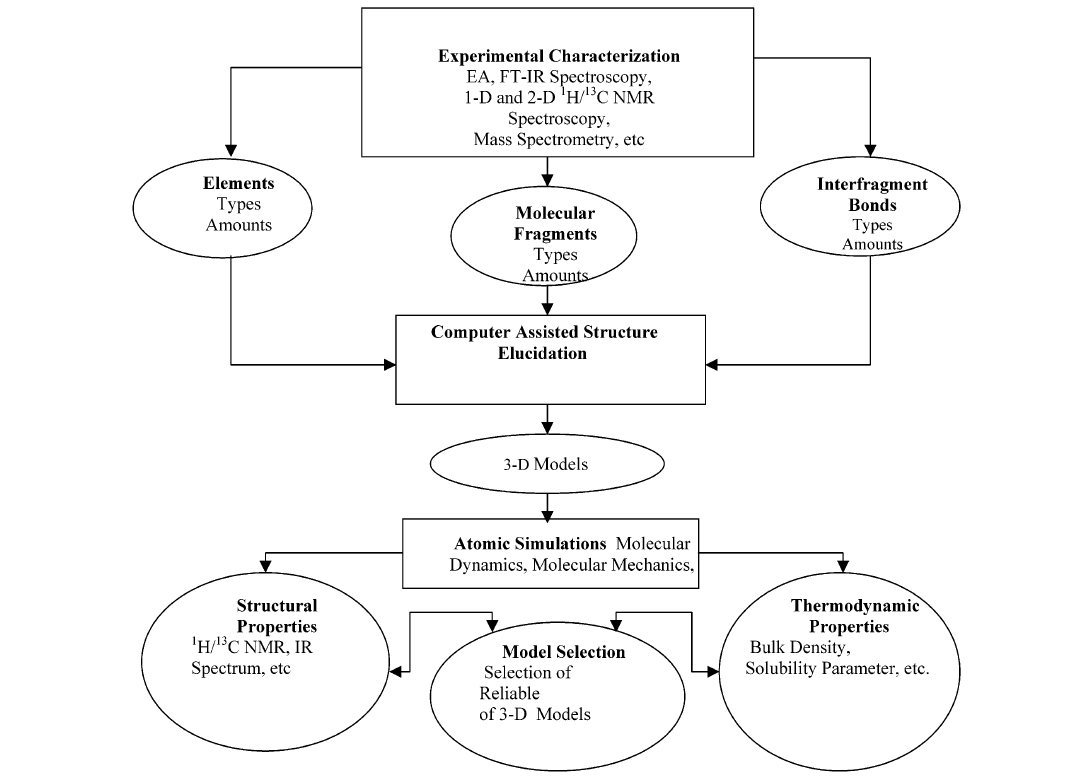 Fig. 8.  The hierarchical approach for modeling the 3-D structures of humic substances.  Taken from Ref.[11] with permission from the American Chemical Society.

Fig. 9.  One of five substructures proposed by Diallo et al. 11.  Reproduced with permission from the American Chemical Society.

Diallo et al. [11] assumed based on electrospray ionization mass spectra an average molecular weight of 1016 and a formula of C45H43O24N1S1.

A different approach to modeling was taken by Albers et al. [2][24].  Structures were constructed based on structural elements based on 13C chemical shifts, elemental analysis data and titration data. In that case the formula ended up as C65H67O30N5. [24] (see Fig. 10).  Liquid state 13C NMR spectra were then simulated based on chemical shifts from the NMR database, NMR predict[25] taking into account slight variations due to titration of carboxyl acid groups (see Fig. 10).  For prediction of a different humic acid see Ref. 11.  This kind of simulation could also be used to test already suggested structures (Fig. 11).  This enables to classify some of the proposed structures as not fully correct as seen in Fig. [11]. and  improvements could be suggested as discussed in Ref.[24]. 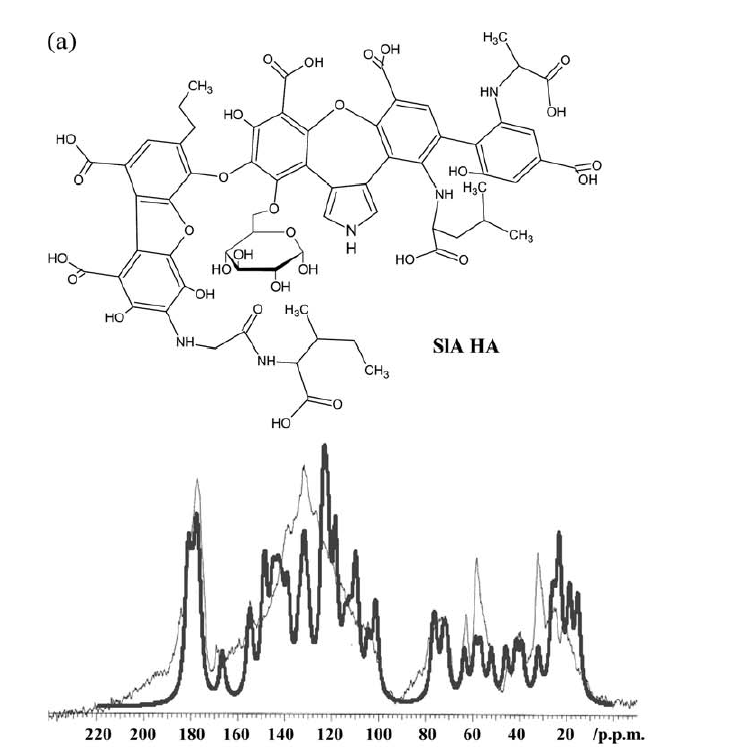 Fig.  10.  Above structure suggested by Albers et al.  and below the measured 13C NMR spectrum (thin line) overlayed by the calculated 13C NMR spectrum.  Taken from Ref. [2] with permission from John Willey and Sons.

The model shown in Fig. 10 is an average structure and should not be taken as the final answer but shows structural elements that can be combined in different fashions. 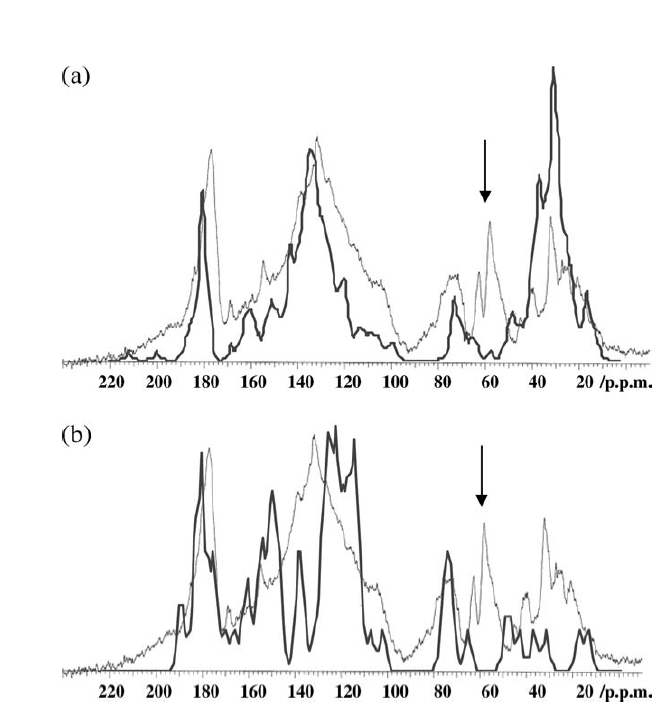 Fig. 11.  Simulated 13C NMR spectrum (heavy line) on top of humic acid spectrum a.  Simulation based on structure of Schulten and Schnitzer Ref.[26]. b.  Stevenson Ref. [27]  Taken from Ref. 2 with permission from John Willey and Sons.