Advanced oxidation processes (AOPs) are water treatment processes that are promising for the degradation of persistent or toxic organic pollutants, as well as compounds refractory to other environmental remediation/decontamination treatments. AOPs have gained great importance as alternative treatment processes that affect the degradation of organic species through the action of the hydroxyl radical (OH), oxidizing pollutants present in wastewater and industrial effluents. AOPs are carried out at room temperature and at a pressure close to normal, which involve the formation of very reactive radical species with a high oxidizing capacity, mainly hydroxyl (OH) radicals. These OH radicals are extremely reactive oxidizers (oxidation potential of the OH radical is approximately, Eθ = 2.8 V) and non-selective towards organic pollutants in wastewater. AOPs can be considered versatile technologies, as they provide different possible alternatives to produce OH radicals. AOPs, compared to conventional water treatment techniques, have a greater efficiency and capacity to degrade recalcitrant organic pollutants, and can generate less toxic intermediate products during their degradation.

The AOP based on the UV/H2O2 system consists of the combination of ultraviolet radiation with hydrogen peroxide (H2O2), leading to its photolysis, in order to generate two hydroxyl (OH) radicals [1], as illustrated in following equation [2]:

An advantage of the UV/H2O2 system is due to the fact that UV radiation acts as a disinfectant, physically inactivating the microorganisms and simultaneously assisting the peroxide photolysis, generating highly reactive OH radical species. Thus, the UV/H2O2 system is currently one of the most promising technologies for wastewater treatment [2][4].

Recently developed, the persulfate oxidation technology (S2O82−) is a new AOP, which has been shown to be a very promising alternative for water and wastewater treatment [5][6].

Due to its high oxidizing power (Eθ = 2.01 V), persulfate is considered an emerging oxidant in the degradation of pollutants present in water, moreover, persulfate is relatively stable at room temperature and has a non-selective behavior in regarding the degradation of pollutants [7][8]. Persulfate can also be activated to produce the sulfate radical (SO4), an even stronger oxidant (Eθ = 2.6 V) than S2O82− [9].

There are several methods of activating persulfate, in general, the SO4 radical can be generated through heat, ultraviolet light, alkali, ultrasound, transition metal ions and activation of metal oxides [6][10].

Compared to the OH radical, the SO4 radical has a longer shelf life, has a wider pH range of action, proved to be more stable and effective in oxidation for water decontamination [11][12]. Furthermore, some studies suggest that after the generation of the SO4 radical, it may react with several species in solution to form other active species, such as the OH radical, which will play a key role in the pollutant degradation process [9][12].

3. Chlorine and NH2Cl Based Processes

Chlorine is one of the most used chemical oxidants worldwide for the disinfection of drinking water [13]. Currently, the UV/chlorine process is considered an emerging AOP, constituting an alternative to the UV/H2O2 process in water treatment, effective in the degradation of a variety of persistent contaminants, such as desethylatrazine, sulfamethoxazole, carbamazepine, diclofenac, benzotriazole, tolyltriazole, iopamidol, 17α-ethinylestradiol [14][15]. Compared to the UV/H2O2 process, the UV/chlorine process demonstrated greater efficiency in the degradation of some micropollutants under slightly acidic conditions, such as trichloroethylene [16]. In the UV/chlorine process, reactive species such as the OH radical and the Cl radical are formed from photolysis of free chlorine (HOCl/OCl-), as shown in the following equations [15]:

The Cl formed reacts with chloride, giving rise to Cl2•−, and both Cl and Cl2•− are strong oxidizers with redox potentials of 2.4 and 2.0 V, respectively. The various reactive species, including the OH radical, formed during this process make the UV/chlorine process a promising AOP for controlling a variety of contaminants in water treatment [14]. Furthermore, chlorine that does not react after the UV/chlorine process can provide residual protection in water distribution systems [17].

Recently, photolysis of monochloramine (NH2Cl) has also attracted significant interest as a new AOP for the degradation of emerging water contaminants, such as carbamazepine, and for efficiently controlling the formation of disinfection by-products [13]. Furthermore, NH2Cl is considered adequate to provide residual disinfection throughout the water distribution system due to its high stability [18].

NH2Cl photolysis generates NH2 and Cl radicals, and due to their strong interaction with water, significant amounts of Cl radical are converted into OH radicals. As discussed previously the OH radical is a strong non-selective oxidizer against the different pollutants present in water. In contrast, Cl radical is a relatively selective oxidant that reacts with most organic micropollutants. In relation to the NH2 radical, there is still not much information about its reactivity to pollutants present in water [19]. Primary radicals can further react with water co-solutes to form secondary radicals (such as CO3•- and Cl2•-). Although knowledge is still quite limited, the UV/NH2Cl process demonstrates considerable potential as a new AOP for water treatment [13][19].

The Fenton process consists of the formation of OH radicals in an acidic medium, from the decomposition of hydrogen peroxide by the action of an iron catalyst [20]. The Fenton process is a very promising AOP due to the high mineralization promoted under normal conditions of both temperature and pressure, very effective in destroying refractory and toxic organic pollutants present in wastewater [21][22]. The main reactions involved in Fenton processes are [23]: 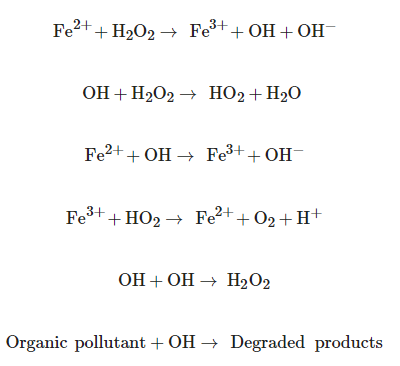 The advantage of Fenton processes is due to the fact that they do not require sophisticated equipment or expensive reagents, they are considered ecologically viable processes due to their high performance and their relatively simple approach, which uses less harmful chemicals and cyclical nature, being necessary a lower concentration of these chemicals [23].

A condition of this AOP is the restricted pH range, where the generation of OH radicals during the Fenton reaction is only efficient under acidic pH conditions (with a pH value close to 3) [21][22].

There are different types of Fenton processes, including Fenton, photo-Fenton, electro-Fenton, photo-electro-Fenton, homogeneous and heterogeneous Fenton, among others. Among the various AOPs, it was the Fenton and photo-Fenton processes that proved to be the most effective, energy efficient and least expensive methods for treating recalcitrant compounds, when used exclusively or in conjunction with other conventional and biological methods [23].

Ozone (O3) is a strong oxidizer, which has been widely used in wastewater treatment and drinking water disinfection. Once dissolved in water, O3 acts as an oxidant due to its high redox potential (Eθ = 2.07 V), leading to the destruction or degradation of organic pollutants, through different pathways, namely molecular ozone (direct) or through the hydroxyl radical (indirect) [24]. The main semi-reactions of ozone in water are [25]:

However, direct oxidation of O3, in addition to being a relatively slow reaction, is also more selective than indirect reactions [26]. In water, O3 undergoes a series of reactions, decomposing into several oxidative species, including the OH radical, which is a stronger oxidant than the original molecular ozone, which reacts with organic and inorganic compounds in a non-selective way, with rates very high reaction rates. Thus, the high oxidative power of ozonization is partially due to the generation of OH radicals [25].

In the presence of other oxidants or irradiation, the yield of the OH radical can be significantly improved, namely through the addition of hydrogen peroxide (O3/H2O2), use of UV irradiation (O3/UV), or addition of metallic catalysts, increasing the efficiency of the treatment. These processes are called advanced oxidation processes (AOPs). Thus, ozonation and ozone-based AOPs are responsible for the destruction of many recalcitrant organic compounds in water and wastewater, including pharmaceuticals and personal care products, solvents, surfactants and pesticides [24][25].

The substrate that absorbs light and acts as a catalyst for chemical reactions is known as a photocatalyst, and all photocatalysts are generally semiconductors. When a photocatalyst is exposed to light of the desired wavelength (sufficient energy), photoexcitation of an electron occurs, which is promoted from the valence band to the conduction band. The absorption of a photon with energy equal to or greater than the separation of the bands (band gap) of the catalyst, thus creates a gap in the valence band. The electron and the gap migrate to the surface of the photocatalytic semiconductor where they act, respectively, as a reducing agent and an oxidizing agent. On the catalyst surface, the adsorbed water molecules are oxidized by the holes, to OH radicals, which can subsequently oxidize the organic matter in solution, transforming it into non-toxic or less harmful products, such as CO2 and water [28].

Among the various existing photocatalysts, TiO2 is currently the most studied in heterogeneous photocatalysis processes, essentially due to its physical and chemical characteristics. TiO2 has high chemical and thermal stability, is non-toxic, inexpensive and has a relatively high efficiency [27].

As a green, highly efficient and ecological technology, heterogeneous photocatalysis for the treatment of organic pollutants present in wastewater has been shown to be a promising technology to face future environmental challenges [29].