Parkinson’s Disease (PD) affects millions of people worldwide with no cure to halt the progress of the disease. Leucine-rich repeat kinase 2 (LRRK2) is the most common genetic cause of PD and, as such, LRRK2 inhibitors are promising therapeutic agents. In the last decade, great progress in the LRRK2 field has been made. As the majority of developed LRRK2 inhibitors are ATP-competitve and shown some safety concerns, here we present alternative ways of targeting LRRK2 (full text [1]). Currently there are three LRRK2-targeting agents in clinical trials, so more developments are predicted in the upcoming years.

Neurodegeneration is defined as age-related, progressive loss of structure and function of neurons, ultimately leading to their death. This in turn leads to severe impairment of many crucial brain functions, such as memory loss, personality changes, and impaired mobility. Because of the ever increasing life span, neurodegenerative diseases pose a major medical challenge worldwide [2].
Parkinson’s disease (PD) is the second most common neurodegenerative disorder, after Alzheimer’s disease. Currently available PD treatments are only symptomatic, with no cure that would stop the progress of the disease or reverse it [3][4]. Early onset diagnosis would allow for better control of the symptoms; however, the current diagnostic toolset relies on presenting them, which is already a sign of advanced neurodegeneration [3][5]. At the moment, there are no specific tests or biomarkers in clinical use that would allow for detecting the disease at an early stage, before presenting the symptoms, although there are some markers that could give an indication for PD [3][6]. PD diagnosis and treatment are further complicated by the various forms of disease due to different underlying causes, which in turn render some of the available treatments ineffective [4][7]. Only about 5–15% of PD cases have a familial history of the disease [5], with most of the cases being idiopathic.
Epidemiological studies have shown that there is strong genetic correlation, with mutations in six genes being the major cause: snca (α-synuclein), lrrk2 (Leucine-rich repeat kinase 2), vps35 (Vacuolar protein sorting ortholog 35), prkn (Parkin), dj1 (DJ-1), and pink1 (PTEN-induced kinase 1) [8][9].
The age of PD onset varies significantly for those genes, and so does the type of inheritance, which can be either dominant (snca, lrrk2, vps35) or recessive (prkn, dj-1 and pink1). Furthermore, recent genome-wide association studies (GWAS) have shown that there is high genetic heterogeneity at the basis of PD, with great racial difference of the genetic causes in different populations and many rare mutations are usually detected only in a single family or in small populations. Among all identified risk-genes, mutations in lrrk2 stand out as the most common, single genetic cause of PD. The most common LRRK2 G2019S mutation may explain up to 5% of all PD cases and is especially high among Ashkenazi Jews and North African Arabs [10]. Importantly, recent studies have also detected an increased LRRK2 activity in post-mortem brain tissue from patients with idiopathic disease [11]. Therefore, LRRK2 has become an essential player in PD pathogenesis, both sporadic and familiar, and insight into LRRK2 function may thus help to understand the progression of PD in general. Hence, targeting LRRK2 might not only be important for LRRK2-mediated PD, but also has the potential to address PD caused by other gene mutations or agents. In this short piece, we will give an overview of all the various LRRK2 targeting strategies and give some future perspective on targeting PD in the clinic.

From numerous studies, it is now clear that LRRK2 goes through a complex activation mechanism. The different PD-mutations all result in increased kinase activity and increased Rab-phosphorylation. Therefore, the most obvious way is direct kinase inhibition, which has attracted the most attention so far from both the academic and industrial community. Numerous ATP-competitive LRRK2-kinase inhibitors have been developed with some of them advancing to clinical trials, despite the initial safety concerns. Currently, three medicinal agents are in phase I clinical trials, the results of which are eagerly awaited. In a press release from January 2020, Denali has announced that both tested compounds were well-tolerated, with little to no adverse side effects [12]. In a subsequent press release from August 2020, it was announced that both compounds have met the criteria to further advance in the clinical trials, with DNL151 being preferred due to more flexible dosing regimens [13]. An FDA application was also filed and approved for DNL151. Phase II for DNL151 is planned to commence in late 2021 [14]. The trial for BIIB094 is still actively recruiting participants, and no outcomes have been made public yet. It is estimated to complete in September 2023. A major challenge in clinical trials for drugs targeting PD is the lack of good biomarkers and setting the primary end-point, since most drugs do not modify the effect of the disease. However, LRRK2 activity is involved in the underlying process that plays a crucial role in both iPD and LRR2-mediated PD. Furthermore, reducing LRRK2 activity and/or levels has neuroprotective effects. Therefore, targeting LRRK2 has great potential as disease-modifying treatment [15].

4. Other ways of targeting LRRK2

Since the various PD-mutations have a different effect on the activation mechanism and there are still safety issues raised with the ATP-competitive kinase inhibitors, targeting other domains of LRRK2 than the kinase may prove to be therapeutically effective. Every step in the complex activation mechanism of LRRK2, including, but not limited to, the Roc domain, protein–protein interaction with the N- and C-terminal domains of LRRK2 (e.g., targeting binding of upstream Rab proteins), and/or dimerization, is a potential therapeutic target (Figure 1). The first Roc domain-targeting, GTP-competitive inhibitors have been developed. To identify new targeting surfaces and further develop these sorts of compounds for allosteric targeting of LRRK2 [16], further characterization of the LRRK2 activation mechanism and high-resolution structures will be of great importance. In this respect, the recently identified full-length structure of LRRK2 will be instrumental [17]. In addition to inhibiting LRRK2 activation, approaches that stimulate dephosphorylation of the major LRRK2 substrates, Rabs, could also be considered [18]. Then, finally, there are factors that could regulate the level of the LRRK2 protein itself, either by PROTACs or targeted gene therapy. 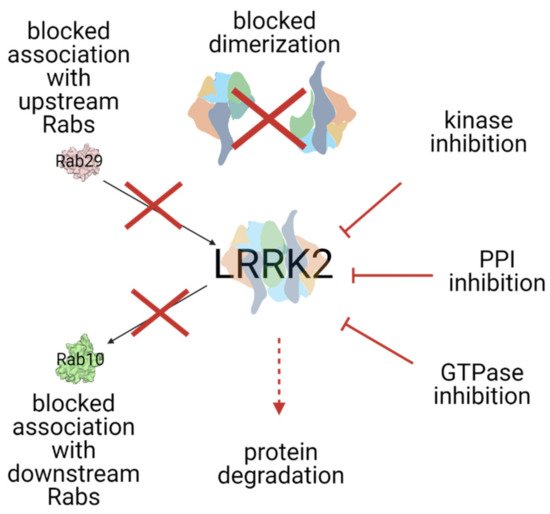 Figure 1. Summarized LRRK2 targeting strategies. See the text for a detailed explanation of each strategy.

LRRK2 field has seen great developments over the past decade and went from the lab to the clinic. Numerous kinase-competitive LRRK2 inhibitors have been developed, few of them advancing to clinical trials. A major question that remains to be answered in the upcoming years is whether the LRRK2 specific compounds would also benefit PD patients that do not carry LRRK2 mutations. The next big challenge in the field is the development of reliable biomarkers for accurate detection of LRRK2 activity and monitoring the progression of PD from the early stages. In this respect, antibody or mass spectrometry-based assays that can detect Rab10 phosphorylation in patients’ samples are being studied, as well as urinary proteome profiling, as non-invasive analytical methods [16][17][18].