In the fluidized bed system, the performance of the reactor is affected by the hydrodynamic behaviors of the reactor in that fluid dynamics affects both heat and mass transfer.

Different modelling methods have been developed to solve the reaction rate over the last few decades, from simplified models to complex CFD models. The simplest model is the shrinking particle model or shrinking core model for nonporous particles. More complex models include the random pore model, which accounts for the particle pore structure and the diffusion and reaction inside the pores.

While CFD simulation can provide detailed information on fluid dynamics and heat transfer in the solid/liquid reaction process, it is complex to build, requiring considerable computational resource and time. Therefore, for engineers who need a quick design of new product or process, or to perform a quick feasibility study or to evaluate or optimize the existing processes or operations within a limited time frame, CFD simulation could be too time-consuming to afford. In these cases, a quick modelling solution with appropriate correlations and empirical equations based on single particle reaction models becomes a desirable option. 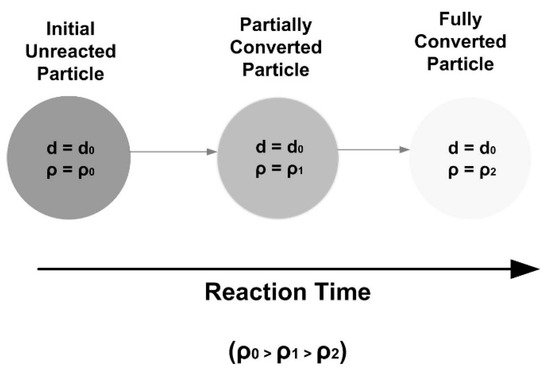 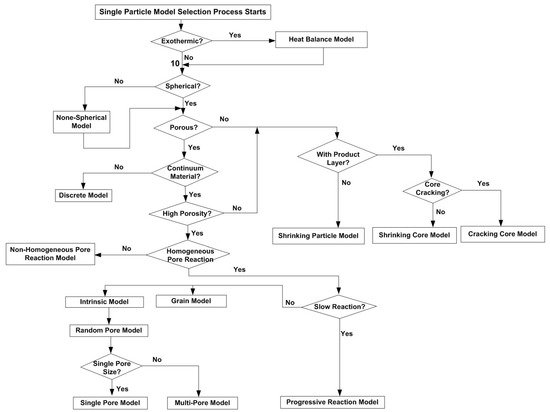 3. Reaction Models for Bed of Particles

Besides a single particle surrounded by fluid, as reviewed in the previous section, fixed bed and fluidized bed have also been used for the reactions involving large number of particles [13][14]. Fluid–solid fluidization occurs when particles are suspended in the flowing fluid and exhibit fluid-like properties. This can be achieved through either external forced draft or internally generated gas products which lift the particle.
Depending on the operational conditions, three hydrodynamic regimes can be found, i.e., bubbling fluidized bed, turbulent fluidized bed, and circulating fluidized bed [15]. A fluidized bed can be represented by a single bulk density and considered to be a heterogeneous mixture of fluid and solid.
All fluidized beds start as fixed beds with a minimum height when the fluid velocities are low. Further increasing the fluid velocity leads to a bubbling fluidization regime, with a high degree of mixing between the gas and solids phases in the case of gas-fluidized beds. In a bubbling fluidized bed with a relatively lower gas velocity, small gas bubbles are generated and grow up while rising in the bed. These bubbles become larger and less stable when the gas velocity is further increased, which are easy to break up. As a result, the fluidized bed begins to expand and transits from the bubbling to turbulent regimes, under which the fluctuations of the solid–gas flow inside the fluidized bed reaches its maximum, and the coalescence of the bubbles and the rates of the breakup reach the equilibrium [15][16]. The different fluidization regimes are shown in Figure 3.