Different groups of raw materials are available for bioethanol production, dependent on their structure and composition. Many research reports describe different lignocellulosic waste for the production of bioethanol, such as corn stover, rice straw, bagasse, grass, and others [1][2][3][4][5]. Marine algae are the new and promising alternative for the production of bioethanol, since they can grow fast, but they still face some challenges, such as their high pretreatment costs. The primary crop for bioethanol production is switch grass that grows in the northern hemisphere and is of great interest because of its low cost, as well as its abundance and high content of sugar substrates. Different grasses also require almost no or very low maintenance and no fertilization.

Marine algae present a renewable biomass source, whose main advantage is in fast and sustainable growth [6][7]. Moreover, they are gaining interest as third-generation feedstock because of the rapid development of biorefineries designed for bioethanol production. Since marine algae have a high content of carbohydrates in their composition, they are able to yield almost 60 times more alcohol than other agricultural or forestry feedstocks [8]. However, there are still some challenges present in using algae as a source for bioethanol production, since the presence of hydrocolloid polymers present in the cell walls of algae makes the walls stronger and therefore requires a pretreatment of such algal feedstock to break down those complex cell wall structures (Figure 3). Such process is expensive and presents around 20% of production cost [9][10]. 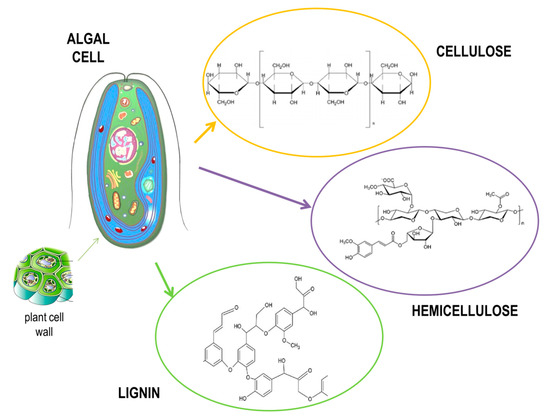 Figure 3. Structure of an algal cell.

Macroalgae or seaweed are divided into three main types: brown algae (Phaeophyta), red algae (Rhodophyta), and green algae (Chlorophyta). In general, macroalgae contain around 25%–60% carbohydrates, 5%–20% proteins, 0.5%–5% lipids, and around 15%–40% ash. Regarding sugar composition (Table 1), brown algae generally consist of alginate, cellulose, mannitol, fucoidin, and laminarin, while red algae consist of agar, carrageenan, cellulose, and lignin; green alga consist of starch, cellulose, mannan, and ulvan [11][12]. In order to hydrolyze seaweed into fermentable sugars, pretreatment and saccharification processes are required. A typical pretreatment method for seaweed into hydrolysate conversion for bioethanol production is based on using acid pretreatment with fairly high temperatures (100–150 °C) [13]. However, other methods for the pretreatment of lignocellulosic bioethanol production, such as microwave [14] and alkali [15] pretreatments, were also used in hydrolysis processes. Enzymatic saccharification is often required following pretreatment using cellulosic enzyme solutions, such as alginate lyase or laminarinase, which are successful in the effective hydrolysis of brown algae [16][17]. On the other hand, microalgae have the ability to grow fast with high lipid content in some species, such as Chlorella sp. In addition, some species, such as Synechococcus sp., contain around 60% carbohydrates [18]. Factors influencing the lipid and carbohydrate content of microalgae are temperature, light, salinity, nutrient content, O2, CO2 level, and pH [19]. The microalgal cell wall is easily broken down with pretreatment with lysozymes or diluted acids when compared to macroalgae or other biomass. Cellulose, hemi-cellulose, lignin, pectin, and other carbohydrates converted to monomers by enzymatic or acid hydrolysis are the most common components in the microalgal cell wall [20].

Table 1. Different macroalgae sugar composition.
Many microalgal strains can accumulate 30% of their dry biomass as lipids, while others can accumulate around 70% as carbohydrates, which are water-insoluble polysaccharides. Those make microalgae an attractive feedstock for different fermentation processes in biofuel production. Green algae can synthesize amylopectin-like polysaccharides in their chloroplasts, while the main polysaccharide is glycogen accumulated in cytosol. Cellulose is the main component of the cell wall; however, the cell wall lacks hemicellulose and lignin. Microalgae have many attractive advantages as feedstocks, such as higher biomass productivity and a noncompetitive nature with crops and other edible feedstocks, and they are far better at effective recycling and converting sunlight and CO2 to algal biomass [21].

There are four major agricultural wastes that are the most favorable biomass feedstocks for the production of bioethanol. Those are rice straw, wheat straw, corn straw, and sugarcane baggase, which are also used as animal fodder and domestic fuel [22]. Most potential feedstocks for bioethanol production are wheat and rice straws and corn stalks, since they contain approximately 35% hemicellulosic material [23]. As agricultural residues present an environmentally friendly step in the process, they also help prevent deforestation. Different crops go through short-term harvest rotations and are therefore more available for bioethanol production [22][24]. Rice straw disposal is limited by its slow degradation, big bulk material, and high mineral content. Only a small part of rice straw is used as animal feed, while the rest of rice straw (more than 90%) is removed by field burning. Among the four mentioned major agricultural wastes, rice straw can produce more than 200 billion liters biofuel per year, being the most abundant waste biomass feedstock in the world [25].

As an alternative to agricultural cellulosic residues, a good candidate for raw materials that has potential for bioethanol production is municipal solid wastes, which can solve the household garbage disposal and therefore limit the environmental problems that may occur due to such problems [26]. All kinds of high yielding crops are gaining great interest as an alternative to woody and agricultural residues, since they present almost 70% of total available feedstocks for bioethanol production.

Two types of forest feedstocks are available for bioethanol production: those are hardwoods and softwoods. Softwoods, such as pine, spruce, cypress, fir, and others have lower density and can grow on a higher rate, while hardwoods, such as oak, willow, poplar, cottonwood, and others are angiosperm and mostly deciduous [27]. Cottonwood is believed to be the most suitable woody feedstock for bioethanol production, since it is the most productive tree with several important advantages, such as a large amount of clones, restoration possibility by multiple cuttings, and uniformity in planting material quality [28]. Different forest feedstocks possess more lignin and less ash content, which makes such woody feedstocks a very attractive raw material to improve and increase bioethanol conversions in its production processes [29]. 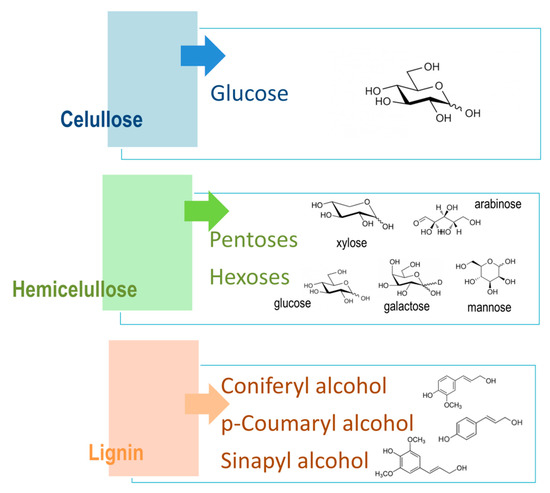 Cellulose is a linear component that consists of long-chain glucose monomer β-D-glucopyranose linked with β-(1,4)-glycosidic bonds, which can also reach more than one thousand units of glucose in length, with cellobiose being its repeating unit. Cellulosic chains are composed of around 1000 D-glucose units, which are arranged in microfibrils. Those fibrils form a lignocellulosic matrix with hydrogen linkages, which makes it very resistant, strong, and compact in its structure [31]. Cellulose is organized by intermolecular and intramolecular hydrogen bonds, as well as van der Waals forces, which make the cellulose crystalline. Where weaker bonds occur in the structure, the cellulose structure is amorphous (Figure 5). Cellulose, being the most widespread organic polymer in nature, requires a temperature of around 300 °C to be converted to an amorphous structure from crystalline. There are two ending groups in each chain of cellulose: a non-reducing and a reducing group. The non-reducing group is at the closed ring structure, while the reducing group is present at the opposite end of the chain, consisting of an aliphatic structure and a carbonyl group [32][33]. Cellulose being highly abundant in plants can be synthesized by animals, algae, bacteria, and fungi as well [34]. A study by Sacui et al. describes the production of cellulose nanocrystals and cellulose nanofibrils by, among others, enzymatic hydrolysis from three types of raw materials: wood, tunicate, and bacteria [35]. A study by Uzyol et al. reports on the production of bacterial cellulose from algae Chlorella vulgaris, which was used as a source of glucose for the production of bacterial cellulose [36].

Hemicellulose is a heterogenous and amorphous structure of polymers that contains different monosaccharide subunits, which include d-glucose, d-mannose, d-galactose, d-xylose, and L-arabinose, as well as other sugar acids, such as d-galacturonic and D-glucuronic acids [37]. The structure of hemicellulose is amorphous and is not physically strong, being easily hydrolyzed by hemicellulose enzymes [38]. It was reported that hemicellulose removal in the pretreatment process can increase the cellulose conversion due to the accessibility of enzymes to cellulose [39]. Through aromatic esters, hemicelluloses can also be linked with lignin, as well as to celluloses with hydrogen bonds, therefore providing a bond between cellulose and lignin. Polymers of hemicelluloses are constituted of different sugars, which the hemicelluloses are classified after. For example, xylan consists of xylose units linked with β-1,4 bonds to the L-arabinose substituted unit of the xylopyranose unit [34][40].

Lignin is an aromatic polymer that is linked with covalent bonds to different xylans. It is a very complex heteropolymer of phenylpropanoied units that is composed of phenolic monomers, such as coniferyl, coumaryl, and sinapyl alcohol. Lignin contributes to the rigidity of the structure and its hydrophobicity [41]. Lignin, the linking part between cellulose and hemicellulose in the cell walls, obstructs cellulose conversion because of several factors, such as total lignin content and lignin structure. Lignin acts as a physical barrier and can limit the accessibility to polysaccharides [42]. The highest levels of lignin are present in softwood, around 30–60%, while grasses and other agricultural wastes contain only around 10–30% of lignin. Components of lignin have a dilution effect when added together with solid components to the pretreatment process, and that affects the hydrolysis process. For that reason, lignin is gaining more and more interest in the hydrolysis process itself [43].