Engineered bacteriophages (phages) are bacteriophages that have been genetically or chemically altered in some way to create or improve a property for an application, although it would be equally valid to use this term for phages altered for research.   Application-directed properties can include: enhanced bacterial killing to improve phage therapy; insertion of reporter genes to facilitate biosensor-mediated detection; insertion of targeting peptides to a virion surface protein to enhance binding properties to bacteria or other types of cells; attachment of non-protein molecules (e.g. antibiotics or nanoparticles) to phage capsid surface proteins to facilitate phage-mediated delivery; anchoring of phages to a surface to improve target capture.  It is also possible to combine modifications to develop, for example, a phage-based cancer treatment that has binding peptides for cancer cell targeting and is conjugated to either a radioisotope nanoparticle or chemotherapy drug to improve delivery.

Bacteriophages or phages have been studied and used for just over 100 years [1][2]. During most of that time, in at least some parts of the world, phages have been used as antibacterial agents. This application is commonly called phage therapy. With the increasing levels of antibiotic resistant bacteria seen world-wide, interest in phage therapy is also increasing, especially in parts of the world that had abandoned it in favor of antibiotics [3][4].
Phage therapy has mostly used phages as they are found in nature since at least some phages for any particular host species are obligately lytic meaning they lack the ability to perform lysogeny. There are, however, some bacterial hosts such as Clostridioides difficile (formerly Clostridium difficile) for which only temperate phages have been isolated [5]. Additionally, the natural presence of bacteriophage resistant strains or subtypes [6] had led some researchers to explore ways to improve the killing efficiency of phages through genetic engineering. Genetically engineered phages have been used to improve existing methods to kill bacterial hosts, provide phages with entirely novel mechanisms to kill host cells, and alter gene expression of targeted bacterial hosts.
In addition to using phages to kill bacteria, researchers have creatively modified phages for applications completely unrelated to the normal phage life cycle. For example, vaccines can be designed using phages that either display a protein antigen from a human pathogen or a cancer cell on their surface or carry the genetic information to encode the antigen. Phages screened by a process called phage display can identify novel peptides and proteins that bind to a target material such as a cancer cell. These peptides can then be displayed on the surface of a phage directing the phage to deliver a chemotherapy drug to the tumor cell. Additionally, phages can be used to detect specific bacteria even in a mixture of many bacterial species.
While some of these applications can be done with other materials such as antibodies, phages have several properties that make them especially useful in developing new therapeutic agents. 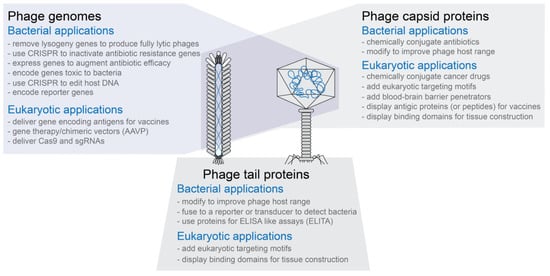 Figure 1. Overview of engineered phages. Both filamentous and tailed phages have been modified to create phages with novel functions. The three modification types are not exclusive of each other. That is, for example, phages in which both the capsid and tail fibers have been modified have been designed and produced.

Although the sheer abundance of phage in the environment allows for the use of naturally occurring bacterial viruses in many therapeutic approaches, phages can be enhanced using genetic engineering approaches (for review see Pires [7]). These techniques allow researchers to increase phage killing efficacy or to introduce other desirable properties, such as expanded host range, increased biofilm degradation, elimination of lysogeny, and the addition of genes to arm phages with secondary antimicrobial payloads [8][9][10][11][12]. And as we will describe below, these techniques and others can be used to alter phages in ways that extend their ability to infect bacteria or add other new functionality for therapeutic use.
One of the most widely used approaches for phage engineering is homologous recombination, where a heterologous segment of DNA is recombined with the phage genome at sites of homology within a bacterial host (see Figure 2A) [13][14][15]. The efficiency of recombination is very low (10−10–10−4) [13][14][15], so an efficient screening method is necessary to identify recombinant phages [16][17][18]. The recombination efficiency is vastly improved if the phages to be edited are transformed into bacterial strains that express high levels of heterologous recombination proteins such as RecE/RecT-like proteins [18] or the lambda red system (see Figure 2B) [19][20]. The efficiency of recovering recombinant phage can be further improved using CRISPR-Cas to counter-select against non-recombinant phage (see Figure 2C) [21][22][23][24][25][26][27][28]. 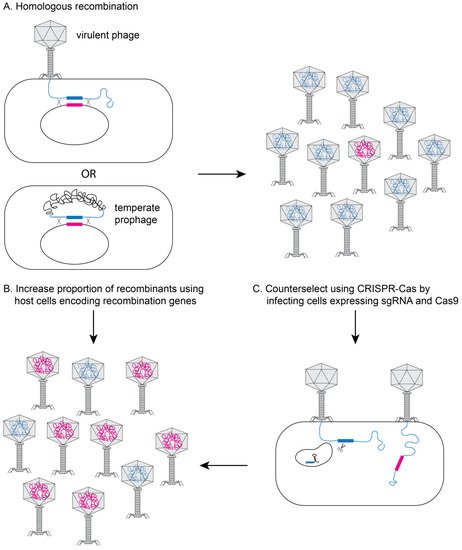 Figure 2. Genetically engineering phage in bacteria. (A) During infection with a virulent phage or in a lysogen for a temperate phage, the phage DNA can recombine with plasmid DNA containing regions of homology flanking the edited section of DNA (pink section). Typical recombination rates are low (10−10–10−4), yielding very few recombinant phage (pink DNA in head). The proportion of recombinant phage can be increased by using host bacterial cells that express recombination genes (e.g., RecE/RecT or λ-red proteins) (B) and/or by using CRISPR/Cas9 to inactivate non-recombinant DNA (C).
Yeast-based or in vitro phage genome assembly methods have been developed to avoid the possible toxic effect of phage replication on the bacterial host. Since yeast cells have an efficient recombination system [9] and phage genes are not toxic to yeast, Saccharomyces cerevisiae can facilitate the assembly of synthetic genomes by transformation associated recombination (TAR) cloning and the assembled genomes can then be electroporated into a permissive bacterial host for rebooting (see Figure 3A) [11][29]. Alternatively, phage genomes can be assembled in vitro from synthesized DNA fragments that have been assembled by recombination or methods such as Gibson assembly prior to transformation into a permissive bacterial host [9]. Finally, cell-free transcription-translation systems can create the phage or virus-like particles from DNA in vitro overcoming the need for a highly competent bacterial host (see Figure 3B). The Noireaux laboratory has developed cell-free systems to successfully replicate, synthesize, and assemble infectious T7, phiX174, MS2, and even T4 phage which has a 170 kb genome [30][31][32][33]. 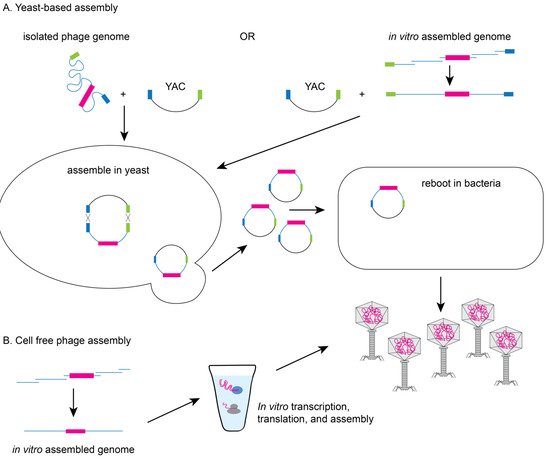 Figure 3. Yeast-based or cell-free phage assembly. (A) To avoid issues of toxicity with phage genes, modifications can be made to phage genomes in yeast using TAR based cloning. Phage genomes (isolated from a modified phage or assembled in vitro) are electroporated into yeast with a linearized yeast artificial chromosome (YAC) containing hooks (blue and green boxes) to facilitate recombination. YACs containing the modified phage genomes can be electroporated into bacteria to produce recombinant phage particles. (B) Alternatively, phage particles can be produced from assembled recombinant phage genomes using cell-free transcription/translation systems.