Pyrazolo[1,5-a]pyrimidine (PP) derivatives are an enormous family of N-heterocyclic compounds that possess a high impact in medicinal chemistry and have attracted a great deal of attention in material science recently due to their significant photophysical properties.

Pyrazolo[1,5-a]pyrimidine (PP) structural motif is a fused, rigid, and planar N-heterocyclic system that contains both pyrazole and pyrimidine rings [1]. This fused pyrazole is a privileged scaffold for combinatorial library design and drug discovery because its great synthetic versatility permits structural modifications throughout its periphery. The PP derivatives synthesis has been widely studied; thus, various reviews related to the obtention and later derivatization steps have been described in the literature [2][3][4][5], after the first critical review involving this attractive scaffold [6] (Figure 1).

Figure 1. Pyrazolo[1,5-a]pyrimidine with (a) the constituent rings and (b) the modified periphery in accordance with the retrosynthetic analysis.

Despite those reports, the synthetic transformations involving this motif still represent a research priority regarding the process efficiency, environmental impact, and the study of its multiple applications. These reports should address protocols that aim to minimize synthesis pathways, employ cheap reagents and develop processes that prevent or reduce waste production. Usually, PP derivative synthesis involves the pyrimidine ring construction via the interaction of NH-3-aminopyrazoles with different 1,3-biselectrophilic compounds such as β-dicarbonyls, β-enaminones, β-haloenones, β-ketonitriles, and so on (Figure 1b) [1][2][3][4][5][6]. Pyrazolo[1,5-a]pyrimidine scaffold is part of bioactive compounds with exceptional properties like selective protein inhibitor [7], anticancer [8], psychopharmacological [9], among others [10][11]. Furthermore, the biocompatibility and lower toxicity levels of PP derivatives have led them to reach commercial molecules, for instance, Indiplon, Lorediplon, Zaleplon, Dorsomorphin, Reversan, Pyrazophos, Presatovir, and Anagliptin (Figure 2) [1][2][3][4][5]. In recent years, this molecular motif has been a focus of study for promising new applications related to materials sciences [12][13][14][15][16][17][18][19][20][21], due to its exceptional photophysical properties as an emergent fluorophore [15][16][17][18][19][20][21]. Likewise, the tendency of pyrazolo[1,5-a]pyrimidine derivatives to form crystals with notable conformational and supramolecular phenomena [17][22][23] could amplify their applications towards the solid-state. Therefore, we aim to cover two main topics related to compounds bearing the pyrazolo[1,5-a]pyrimidine core. At the first one, the reader will find relevant synthesis strategies and functionalization reactions. Subsequently, in the second part, we focus on the recent compounds presenting antitumoral and enzymatic inhibitory activity. The examples described and commented herein came from the 2015 to 2021 period. 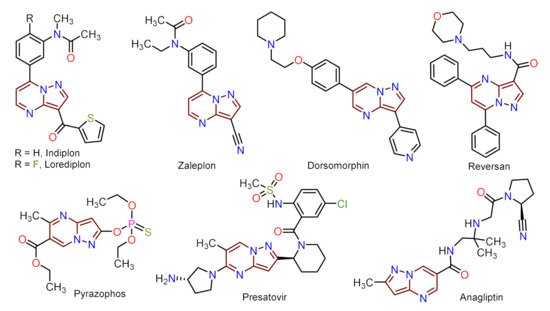 As stated before, the synthesis of PP derivatives is the focus of various research; however, more recent studies in this area are focused on improving known reaction protocols. Regardless, innovative synthesis methods still emerge that offer creative ways to modify established ones. Notably, the main synthesis route of pyrazolo[1,5-a]pyrimidines allows versatile structural modifications at positions 2, 3, 5, 6, and 7 via the cyclocondensation reaction of 1,3-biselectrophilic compounds with NH-3-aminopyrazoles as 1,3-bisnucleophilic systems (Figure 1b) [1][2][3][4][5][6][24][25].

This reaction is one of the most employed to add functionalized aryls on position 3 or 5; several organometallic species have been evaluated with favorable results, such as boronic esters, boronic acids, and fluoroboranes. The reactions have been carried out mainly using solvents like water mixed with some organic solvent (to maximize solubility) or in dioxane, and carbonates appear to be the preferred base, perhaps due to carbon dioxide formation facilitating the workup [26][27][28].
Jismy and co-workers designed a method for functionalizing 36e at position 5 using a one-pot synthesis. They produce an exchange of hydroxyl group for a chloride atom by a nucleophilic aromatic substitution (NAS) reaction; thus, employing optimized conditions for the coupling reactions could achieve aryls at position 5 like in product 79 (Scheme 1a) [29]. The reaction was further applied in the amine 3-bromosubstituted 81 and was optimized, finding the highly reproducible conditions to obtain 82 (Scheme 1b) [30]. The reaction shows an improvement in reaction times, and also, regarding the previous work, the authors found that modifying the ligand and catalyst enables the functionalization of the nucleophilic site at the pyrazolic moiety. Recently, they provided a method to add an aryl moiety at position 3 of the fused pyrazole 84, which has a hydroxyl/enone group at position 5 and a CF3 group at position 7 (product 85, Scheme 1c) [31]. The reaction conditions were screened to find an optimal setup, though the reaction conditions with the better performance are those previously reported. Interestingly, the fluorophenyl group and some heterocycles were found to be compatible with this strategy, with yields from 67 to 84% [31].

Scheme 1. Functionalization of the position 3 and 5 via Suzuki cross coupling reaction of (a) 36, (b) 81 and (c) 84.
Related to this work, the employment of Suzuki coupling results is a common strategy in medicinal chemistry. Liu et al. reported the obtention of 17 examples about 88, where the amines or ethers present at positions 5 and 7 are modified (Scheme 2a) [26]. Employment of PdCl2(dppf) as a catalyst and heating under MW irradiation appears to produce highly reproducible conditions for short-time reactions, and the authors obtained salt forms of each compound analogs to 88 for reactions with amounts above 200 mg of compounds related to 87 (Scheme 2a). Similarly, Lindsley and co-workers designed a fast reaction to functionalized the CF3–substituted PP 90 with aryls moieties bearing methoxy group (compound 91) or fluor atoms (not shown) (Scheme 2b) [32]. Related to these advances, Drew et al. employed the same Pd-catalyst bearing dppf as a ligand to perform the coupling of 93 with the isoindolinone 92, the reaction proceeds by the lability exchange with the halogen added according to the electronic properties of the position 5 against position 3 in the pyrazolo[1,5-a]pyrimidine 93 (Scheme 2c) [27]. 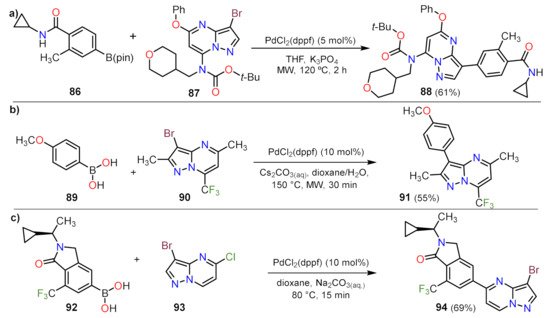 Scheme 2. Synthesis of 3-arylpyrazolo[1,5-a]pyrimidines (a) 88 and (b) 91, and of (c) the 5-aryl derivative 94 by Suzuki coupling.
The bromide atom left in 94 serves as a reactive center for a Buchwald–Hartwig coupling forming the acetamide moiety on 95 using BrettPhoss Pd G3 catalyst, a synthesis that is more efficient as stated by the researchers. The researchers added the iodine atom at position 2, enabling the later addition of heterocyclic species at this position, delivering the 2,5-diheteroarylpyrazolo[1,5-a]pyrimidine 97 (Scheme 3a) [27].

Scheme 3. Examples of functionalization by Suzuki coupling with the addition of (a) pyrazolic and (b) cyclopropyl moieties.
This reaction is probably favored by the labile character on the I–C bond in 95 and the nucleophilic nature of its coupling partner 96. Likewise, Harris et al. designed a method focused on the generation of disubstituted cyclopropanes, employing the proper borontrifluoride 98 and 3-bromopyrazolo[1,5-a]pyrimidine (99) which, under optimized reaction conditions, delivers 100 in 53% yield (Scheme 3b) [28]. Similarly, Lindsley and co-workers employed borontrifluoride derivatives as a coupling partner for Suzuki coupling reaction, adding a vinyl over position 3 of 136 (see Section Formylation Reactions for detail).

This reaction commonly involves using a terminal alkyne bearing the PP core with an aryl/alkenyl halide as the coupling reagent. In almost all scenarios, Pd species are employed as the primary catalyst [33][34]. In this respect, Dong et al. designed a method to functionalize 5-ethynylpyrazolo[1,5-a]pyrimidine (101) with the alkyl bromide 102. The reaction employs a copper salt with a ligand quinine derivative (L), achieving the formation of a new C–C (sp)/(sp3) bond in the absence of any Pd species [34]. The compound 103 is obtained in a high yield and with a high enantiomeric excess (ee), providing an approach towards functionalized products readily found in medically relevant molecules (Scheme 4).

Scheme 4. Generation of a chiral carbon in coupling product 103 by a Cu-catalyzed Sonogashira reaction.
Related to this matter, Childress et al. employed a common Pd catalyst and MW heating to achieve the functionalization of terminal alkyne 105 with an excess of 4-bromo-2-(trifluoromethyl)pyridine (104), obtaining the product 106 in 40% after purification by HPLC (Scheme 29a) [35]. The authors also obtain other two pyridine moieties in analogs of 106 employing the same methodology. Similarly, Jismy and co-workers developed a method to functionalized the aza-heterocyclic core at position 5 with wide scope [30][29][36][31]. Different from other authors, they generate the electrophilic coupling partner substituting the hydroxy/enone group at position 5 of 36d (and analogs), then using the proper alkyne, the reaction delivers the product 108 (Scheme 4b) [36]. The reaction shows a high scope regarding the alkyne used, with a great influence on the substituent, wherein aromatic or conjugated ones achieve higher yields than alkyl or cycloalkyl substituents.

Important reactions related to this matter are the C–H activations employing Pd species where the active species is prepared in situ. Bedford and co-workers developed a protocol that enables functionalizing of the positions 3 or 7 selectively in PP. An excess of aryl bromide (Ar–Br) was employed to obtain the 7-pyrazolo[1,5-a]pyrimidines 110a–f a (Scheme 6) [37]. As expected, coupling reactions regioselectivity involving the heterocyclic core and an aryl bromide (Ar–X) depends on the electronic properties of reagents; indeed, the more π-deficient rings (e.g., Ar = pyrimidin-5-yl) behave well as electrophilic partners providing the 3-aryl derivatives 109a–f in high yields via a coupling at the highly nucleophilic position 3 of PP. In contrast, π-excedent rings (e.g., Ar = 4-methoxyphenyl) behaves well when coupled to a more electrophilic place such as position 7, delivering 110a–f. In order to explain these notable reactivity findings, the authors also report a DFT calculation analysis of the substrate, which are in agreement with those recently reported by Portilla et al. [18].

Scheme 6. Pd-catalyzed synthesis of 3-aryl 109 and 7-arylpyrazolo[1,5-a]pyrimidines 110 starting from PP.
Similarly, Berteina-Raboin and co-workers designed a protocol to functionalize position 3 of the fused pyrazole 111. The authors optimized the solvent, base, ligand, and palladium source; once the optimal conditions were founded, the authors proved various aryls bromines (Scheme 7) [38]. Furthermore, Gogula et al. provided a method to modulate the C–H activation of (sp2) or (sp3) carbon based on the temperature over the fused pyrazole 113 and analogs [39]. In addition, the added palladium generates a stable coordination complex 114 which the authors obtained, this species is responsible for the activation of the methyl C–H leading to a palladation (not shown) and subsequent formation of the C–C bond with the aryl iodine, delivering 115 a–f. On the other hand, the activation of position 6 in the PP ring occurs by a tetramer compound (not shown), which generates a π-aryl palladation at position 6 and later arylation forming products 116a–f. All reactions were carried out in hexafluoroisopropanol (HFIP) as a solvent, which proved to be efficient in terms of the compound’s achieved solubility and reaction temperatures. This solvent is known as a magical solvent for Pd-catalyzed C–H activation [40] (Scheme 8).

Scheme 8. Pd-catalyzed synthesis of 7-(pyridin-2-yl)pyrazolo[1,5-a]pyrimidines 115a–f and 116a–f.
Finally, in the context of medicinal chemistry, McCoull and co-workers developed a method that enables the ring closure by olefin metathesis reactions on functionalized pyrazolo[1,5-a]pyrimdines 116 (Scheme 9) [41]. The protocol employs considerable catalysts quantities to achieve the reaction, and the authors evaluated various synthesis pathways to maximize the process efficiency. The stereochemistry over 116 correctly in the pyrrolidine fragment controls the final conformation achieve in 117, which is an atropisomer due to restricted rotation by the aryl fragments of the macrocycle.

Scheme 9. Use of Grubbs catalyst to obtain macrocycles having PP through ring closure metathesis.