COVID-19 is a viral disease characterized as a pandemic by the World Health Organization in March 2020. Since then, researchers from all over the world have been looking for ways to fight this disease. Many cases of complications arise from insufficient immune responses due to low immunity, with intense release of pro-inflammatory cytokines that can damage the structure of organs such as the lung. Thus, the hypothesis arises that photobiomodulation therapy (PBMT) with the use of a low-level laser (LLLT) may be an ally approach to patients with COVID-19 since it is effective for increasing immunity, helping tissue repair, and reducing pro-inflammatory cytokines. This systematic entry was performed with the use of PubMed/MEDLINE, Web of Science, Scopus and Google Scholar databases with the following keywords: “low-level laser therapy OR photobiomodulation therapy AND COVID-19”.

COVID-19 (SARS-CoV-2) is a viral disease discovered in December 2019, in the Chinese city of Wuhan, and spread to several continents, which led the World Health Organization (WHO) to characterize the disease as a pandemic 11 March 2020 [1]. This fact demonstrates the considerable speed of propagating this infectious pathogen, spreading around the world in a few months because on average, one infected person spreads the infection to three other people [2]. The forms of contamination are varied, such as through droplets of saliva, contaminated objects and surfaces, coughing, and sneezing. Thus, social distance and hygiene measures are essential to reduce contamination by the virus, with social isolation being the most effective method [3][4].
The most common symptoms of COVID-19 are cough, fever, anosmia, ageusia, difficulty breathing, and in more severe cases, pneumonia. Some conditions, such as diabetics, cardiac and hypertensive individuals, are more susceptible to presenting more severe conditions. This is also observed in people with low immunity since immunity is a great ally to the fight against coronavirus in the human body [5][6].
However, although high immunity is a good ally, its low levels can intensify the inflammation process. In the case of a defective immune response against COVID-19, an accumulation of immune cells in the lungs can occur, causing an exacerbated production of pro-inflammatory cytokines, which can damage the lung structure. With this excess of cytokines, it can spread to other locations, causing damage to multiple organs. In a healthy immune response, virus-specific T cells target inflammation and eliminate infected cells, preventing the virus from spreading, leading to minimal damage. Thus, stimulation of immunity is critical to approach the new coronavirus [7].
There are several ways to increase immunity that can be conducted by practicing physical activity and having good eating habits, which have been shown to affect immune sensitivity and inflammation [8]. There is also the possibility of using Vitamin D and Zinc in capsules, which in the body have beneficial immunomodulatory and anti-inflammatory effects in infections caused by viruses. Still, in the context of COVID-19, there is no scientific evidence to prove the effectiveness of these elements [9].
Another way of modulating the immune system is the use of photobiomodulation therapy (PBMT), which can stimulate immune cells to clump together at the site of the affected cells and assist them in survival through greater anti-inflammatory cytokine expression and decreased pro-inflammatory. In precursor studies, it was observed that laser light in low doses accelerated the healing of excisional wounds, called laser biostimulation [10]. There was a clear lack of consensus on the terminology for this therapy. The term most often used is low-level laser therapy (LLLT). ‘‘Laser’’ is not the most appropriate term as other light devices such as LEDs are currently used for this application. The ideal term and its definition must be precise and emphasize its scientific basis, with photobiomodulation being the term of choice to describe this use, meaning light therapy that uses non-ionizing forms of sources including lasers, LEDs, and broadband light in the spectrums visible and infrared [11].
The effect of PBMT is due to its absorption by tissues through photoreceptors, facilitating events such as mitochondrial respiration, calcium transport—which results in more significant cell proliferation—repairing, and regenerating tissues [12][13][14][15]. PBMT has to assist in the recovery process from nerve [16][17][18], bone [19][20][21], respiratory tract [22][23][24][25], and other injuries involved in functional rehabilitation, favoring the patient’s recovery. LLLT can be used with the ILIB technique (Intravascular Laser Irradiation of Blood), which increases immunity, inducing positive effects on the expression of immunoglobulins (IgA, IgM and IgG) and modulation of inflammation. Therefore, this technique can be used to treat various pathogens such as infectious diseases, bronchitis, and pneumonia [26].

The phases of the bibliographic search were organized by the Prisma Flow Diagram [27] (Figure 1). 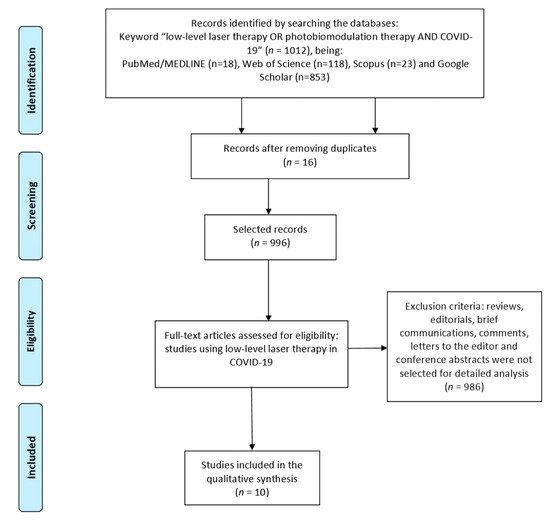 3. Photobiomodulation Therapy as a Possible New Approach in COVID-19

This systematic review was carried out to evaluate the published literature, against the established descriptors and the inclusion and exclusion criteria of the articles, in an attempt to identify patterns and trends on the association of COVID-19 and PBMT, as well as to identify possible gaps and trends new areas of research. Although there are still few studies, our results shown that PBMT can bring benefits for COVID-19 patients since it is related to modulating the immune system, to the reduction of inflammation, and other beneficial activities for the restoration of health.
SARS-CoV-2 leads to the death of cells attacked by it, causing a blockage in the airways with its waste, making breathing more difficult with the accumulation of dead cells and fluids in the lungs [28]. The immune reaction in the infected patient usually causes inflammation and fever. With vasodilation at the site of infection, the lungs accumulate fluid [29]. This exaggerated immune response is called cytokine storm, which causes Acute Respiratory Distress Syndrome (ARDS), fever, multiple organ failure, and death [30]. The effect of laser therapy is related to the amount of laser energy per cm2. The minimum therapeutic dose for a biostimulant effect for the red and infrared laser is 0.01 J/cm2, while for the blue, ultraviolet, and green lasers it is 0.001 J/cm2. The effective stimulation dose is 1 J/cm2 and doses greater than 10 J/cm2 can produce inhibitory effects, used in conditions that require inhibition and suppression, such as, for example, suppressing the inflammatory response in an attempt to avoid or minimize the storm of pro-inflammatory cytokines [30].
The use of phototherapy in treating illnesses has been reported since Ancient Greece, initially called Heliotherapy, and consisted of leaving the sick exposed to the sun to cure their ailments, as shown in Table 1 [31]. In 1918, during the crisis caused by the Spanish flu, phototherapy proved to be a great ally in the treatment of this disease, being pointed out as one of the most significant factors in reducing mortality. Since then, several studies have been carried out to understand better the beneficial effects of light, especially blue, violet, red, and infrared light [31].
These studies found blue and violet light effects such as virus inactivation, including coronavirus and the common flu virus, and antimicrobial effect. These effects can be used, respectively, for cleaning, avoiding contagion by a coronavirus from infected surfaces, and mitigating opportunistic bacteria in the treatment of COVID-19 [31][32][33]. In addition, therapeutic effects of red and infrared light have also been found effective in treating various diseases such as pneumonia, decreasing inflammation, pulmonary edema, and fibrosis in the lung. These effects are important to avoid many complications of COVID-19, with ARDS the leading cause of death from the disease [31]. From this, more technological and specific lasers were developed, giving rise to photobiomodulation, which can be a great ally to the treatment of COVID-19.
Moreover, the effects of the blue laser go beyond the antimicrobial and anti-inflammatory capabilities. Its irradiation in the blood also favors hormonal harmonization, pain reduction, and the release of hemoglobin nitric oxide (HbNO), which has a powerful antibacterial effect and causes the destruction of microorganisms of all types in the blood. This can be used in antimicrobial photodynamic therapy with the combination of Riboflavin, a photosensitizer, for bacterial, viral, and parasitic diseases. The production of nitric oxide (NO) in the immune system is key to the capabilities and characteristics of immune cells and having cytotoxic and cytoprotective, antiviral, antimicrobial effects, and stimulating and suppressing the immune system. With the blue laser increasing the level of NO, mitochondrial biogenesis in different types of cells and oxygen connection to red blood cells is also increased (Figure 2) [5][34][29]. However, the use of lasers in viral mortality is not widespread, but there is evidence that the 405 nm LED light has antiviral activity [31]. Thus, the coronavirus could be killed or altered to be used in the preparation of vaccines. For this, the maximum irradiation takes 10 min with a power of 2 mW [5][34]. 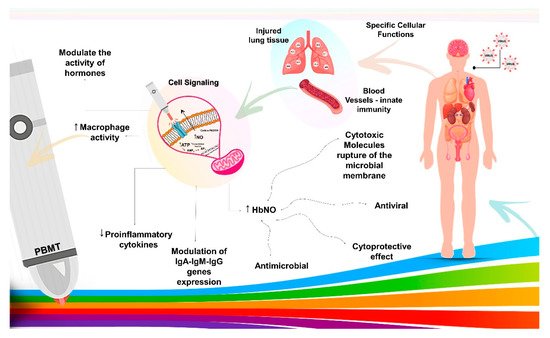