Flake powder metallurgy (FPM) including different processing routes, conventional FPM (C-FPM), slurry blending (SB), shift-speed ball milling (SSBM), and high-shear pre-dispersion and SSBM (HSPD/SSBM). The name of FPM was derived from the use of flake metal powders obtained by low-speed ball milling (LSBM) from spherical powder. The uniformity of reinforcement distribution leads to increased strength and ductility. Powder is the basic unit in PM, especially advanced PM, and its control is key to various new PM technologies. The FPM is a typical method for finely controlling the powder shape through low-energy ball milling (LEBM) to realize the preparation of advanced material structures.

The FPM via typical dry milling is introduced as powder BM in a dry jar. Specifically, the ingredients blended in the jar are reinforcement, matrix powder, steel balls, and usually a processing agent such as stearic acid, ethanol or similar. The process of flaking for spherical metal powders under the C-FPM route is performed through micro-rolling (ball milling) the starting powders (Figure 1a). 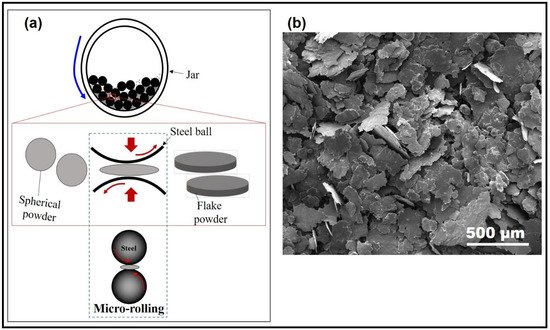 Figure 1. (a) Schematic of micro-rolling process, (b) SEM images of CNT/Al flakes under C-FPM route.
In current practice, for the first time, the LSBM process is considered a kind of rolling process, but on a micro scale—namely, micro-rolling—because: (1) the LSBM process causes plastic deformation of initial powders, thus leading to significant effects on the geometry of the powders; specifically, particles flatten via a process which is similar to the one which is performed in the conventional rolling process, (2) milling balls can be considered similar to conventional rollers but with a much smaller size, and (3) despite the difference in the source of the generation of imposed stresses, deformation occurred originating from shear stresses upon the powders.

The strategy of using a slurry-based dispersion process of the reinforcement has emerged as a mighty new route in overcoming the prerequisites needed to produce advanced AMMs [39][69]. In this technique, the particles’ morphology is modified from three-dimensional spheres to two-dimensional flakes. Subsequently, the surface is modified through organic solutions such as polyvinyl alcohol (PVA) or ethanol. In this way, the flakes can easily attract the second phases onto their surfaces. The produced composite is then compacted and sintered, as illustrated in Figure 2a. 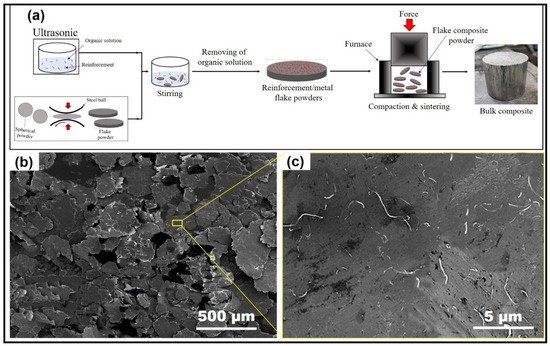 Figure 2. (a) Schematic of slurry-based dispersion process, (b,c) SEM images of CNT/Al flakes under FPM-SB route.
As a matter of fact, the FPM-SB CNT/Al nanocomposite showed tensile stress of 375 MPa with strain to fracture around 12%, very high when compared to corresponding material produced via conventional PM (330 MPa strength and 6% ductility, Figure 3a) [24][26]. The high-level ordering nanolaminates of flake-shaped building blocks was reported as the key factor in significantly increased tensile strength and ductility when compared with nanocomposites with the same matrix and with non-uniform distribution of CNTs. Moreover, Figure 3b depicts that the advantage of FPM over other methods such as nanoscale dispersion (NSD) [9], low-energy blending (LEB), and others can be obtained through the comparison of the strengthening effects of CNTs®. In fact, an incredible strengthening of the efficiency of CNTs is obtained through FPM thanks to the homogeneous and individual distribution of CNTs in the Al matrix, originating from the high compatibility of Al powders with CNTs [24][70].

Figure 3. Tensile properties of CNT/Al nanocomposites (a) loading with 1 vol.% CNTs and fabricated by conventional PM and flake PM (inset shows the relevant strengthening efficiencies of CNTs), (b) The strengthening efficiency and tensile strength for CNT/Al composites fabricated by various methods, the data were drawn based on recent reviews [22][24][48][71][72].
Despite the numerous advantages of FPM via slurry blending, through the application of the abovementioned method to fabricate AMCs with high nano-reinforcement percentages of CNT [3], SiO2 [73], etc., the ductility of the composite also decreased dramatically. Thanks to high nano-reinforcement percentages, various layers of nano-reinforcement can be bonded and overlapped through slurry-based dispersion, even if this leads to difficult bonding between neighboring Al nanoflakes. Hence, the main goal of the FPM processing route for the production of MMCs is the combination of reinforcement dispersion with the structural properties and matrix-second phases bonding.

The correlation between the CNTs distribution, consequent bonding and final mechanical strength of the composites has been the subject of in-depth study by many scientists [35][65][67][74][75][76][77][78]. Here, the different BM conditions (low- and high-energy) affecting the final properties of AMCs are illustrated in order to optimize the different milling strategies. To this end, recently, Xu et al. [27] proposed a new flake powder metallurgy route via a SSBM strategy. In this strategy, LSBM was applied for very long times in order to obtain aluminum flat flakes with very uniform distribution of reinforcements without damage. The results are compared with those of HSBM in order to produce cold-welded lamellar particles with acceptable CNT/Al bonding and inter-flake bonding, as shown in Figure 4a. Specifically, LSBM allowed for mild ball-to-powder contact and very slow flattening of spherical metal powders into flake-shaped powders. This provided enough time for nano-reinforcements to be optimally dispersed on the surface of metal flakes with low damage to structure integrity of nano-reinforcements, especially carbon-based ones such as CNT or graphene; HSBM showed much more pronounced collisions and cold welding of Al flakes into cake-like particles with a clear laminated structure, as seen in Figure 4b,c, leading to clustered nano-reinforcements within the welded metal particles. In this case, very pronounced damage to reinforcements resulted. 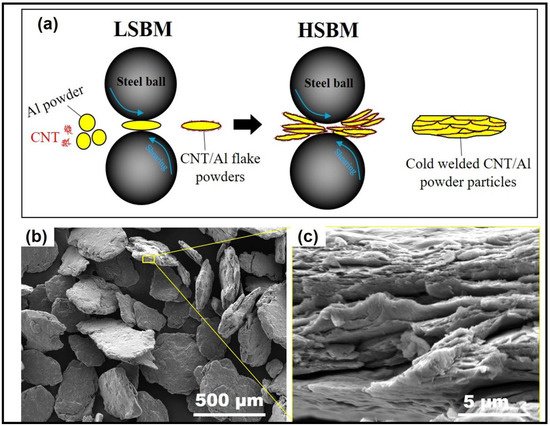 Figure 4. (a) Illustration of co-deformation/dispersion mechanisms of CNT/Al powders during FPM-SSBM, (b,c) SEM images of CNT/Al particles obtained via FPM-SSBM route.
Further developments demonstrate that SSBM, where different powder deformation mechanisms are obtained as a consequence of various milling speeds, produces a high strength of up to 1.5% of CNTs. The strength and ductility levels are much higher compared to sole LSBM or HSBM [27]. As a matter of fact, the optimal combination of reinforcement distribution, structural integrity and matrix-second-phase bonding can be obtained through a new SSBM process known as FPM-SSBM.
Most composites exhibited a strength–ductility dilemma and these data are all placed under a typical ‘‘banana shaped” curve (Figure 5). However, the strength–ductility results of the SSBM route for CNT/Al composite overcome the blue belt in the graph, demonstrating improved mechanical properties. Therefore, FPM-SSBM is a very effective route for this materials’ processing. Comparing previous studies with FPM-SSBM revealed that, with conventional milling processes, it was difficult to fabricate CNT/Al composite with uniform CNT dispersion and good bonding without reducing CNT integrity [70]. In contrast, SSBM enhanced the mechanical property of CNT/Al composites by combining the advantages of LSBM, which included mild ball-to-powder collision and slow flattening of spherical Al powders into flakes, with those of HSBM, which included a much stronger collision and cold welding of Al flakes, and avoiding the adverse factors introduced by LSBM and HSBM, which were unhealed insufficient bonding between Al flakes, and many local brittle areas with CNT clusters or forming brittle Al4C3, respectively. Hence, FPM is known as a smart technology of SPD materials based on a bottom-up approach. 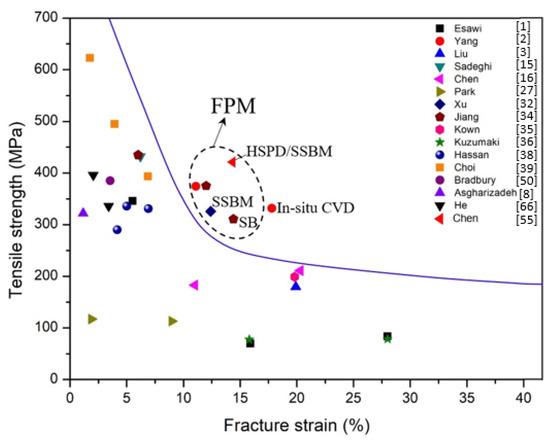 De-agglomeration of CNTs before ball milling results in an optimal solution to gain good reinforcements dispersion. However, this good dispersion is difficult to obtain via the traditional SB route because of the easier re-aggregation of second phases during drying. Presently, many AMCs’ processing routes show some limitations in the reinforcement dispersion, especially in the case of high reinforcement percentages. In addition, as the reinforcement percentage increases, the control of interfacial reactions becomes more difficult [65]. The PM-based methods include high-energy ball milling [19][46][54], flake powder metallurgy [24][34], liquid-phase ball milling [24][61], nanoscale dispersion method [9][10], molecular level mixing [62][63] and the in-situ formation of CNTs in combination with low-energy ball milling [11][37][64], etc. [65]. Nevertheless, these solutions require energy and time consumption which is incompatible with industrial production. Therefore, pre-dispersion optimized methods are fundamental in this direction [34][52][79][80].

In addition to the production methods of flake powder mentioned above, two other techniques based on controlling ball movement—namely, electrical discharge-assisted mechanical milling (EDAMM) and magnetic mechanical milling—may be introduced here. The key point applied in these two advanced techniques is related to control of the pattern of ball movement: the former incorporating high-voltage, low-current electrical discharges and the latter using the external magnetic field. In both techniques, the applied conditions cause rapid fracture rates, enhanced mechano-chemical reactions and novel reaction paths [81][82][83]. However, achieving flake powder using EDAMM and magnetic mechanical milling strongly depends on processing parameters such as discharge type (glow and spark [84]) and operation mode (shearing and impact [82]).
The EDAMM technique works on the principle of interface transformation rather than diffusional transformation, the main underlaying mechanism in conventional BM, as shown in Figure 6a. Indeed, narrow and micro-sized gaps between individual balls, as well as between balls and the chambering wall accompanied by a high-voltage electrical impulse, are basically governed by the type of electrical discharge that is formed. The mechanisms associated with these types of milling with electrical discharge—either glow (cold) or spark (hot)—are highly complex, and more literature on processing parameters under different electrical conditions is required. Moreover, according to the current knowledge, there is a general consensus on the fact that the electrical discharge condition induces large thermal and mechanical stresses within powder particles which, in turn, cause combined effects such as local melting, partial evaporation and Joule heating [81][83][84]. The morphology of the achieved powder has a dominant shape, mostly flake, followed by circular and angular (irregular).