Diverse microbial domains inhabiting the plant endosphere can be beneficial or pathogenic. The beneficial types are referred to as plant growth-promoting endophytic microbes. In agricultural sustainability, the exploration of the beneficial type is utmost of interest in ensuring sustainable plant health. Fungal interactions within the plant endosphere can be modulated by the synthesis of attachment organelle (hyphae) which enable them to create an interdependent ecological balance within the host plants. The impact of fungal endophytes in plant growth promotion can be linked to their potential in various plant physiological functions, directly or indirectly. Also, the production of invaluable bioactive metabolic compounds by fungal endophytes has contributed to their biocontrol efficacy against plant pathogens. Therefore, exploration of fungal endophytes can be promising in agriculture, and interest in endosphere biology will contribute to harnessing them as bioinoculants in developing eco-friendly agriculture.

Plants harbor diverse populations of microbial domains such as bacteria, fungi, and archaea and can be found in the below or above plant parts [1]. The endosphere represents the internal tissue of plants colonized by different microbes, and their life cycle within the plants can be beneficial in improving plant growth, although, some can be pathogenic [2]. Fossil records in the study of plant microbial ecology have shown the prehistorical interaction of fungal endophytes with plants and most fungal endophytes interacting with plants have been reported to have originated when higher plants were first seen on Earth [3]. Fungal endophytes symbiotically associated with their host plants; their mutual interdependence enabled them to confer beneficial effects and support each other [4]. Plants secrete exudates that supply nutrients to the endo-mycorrhiza in the rhizosphere and other endophytes infiltrating the root tissues; in return, the fungal endophytes chiefly support their host plants to survive under different environmental stresses by secreting stress-adaptor metabolites [5][6].

It is expected that despite the multidisciplinary research approach in the study of fungal endophytes, insights into their plant growth-promoting traits, and their various bioactive compounds, the discipline is still in its infancy, and little success has been recorded in their use as bioinoculants and commercialization. Therefore, the biotechnological application of fungal endophytes in agriculture and industries is promising, and harnessing them as an alternative to chemical fertilizer for improving crop production became necessary. The biotechnological overview of agriculturally important endophytic fungi with insights into their use in developing eco-friendly agriculture has been documented [1]. Currently, studies on the endophytic fungi associated with a medicinal plant, Pelargonium sidoides have been reported to contribute to plant growth and the use of this plant in traditional medicine and primary health care in South Africa are known [10].

Fungal endophytes contribute to plant growth promotion via direct or indirect mechanisms (Figure 1). In the direct mechanisms, the potential of endophytic fungi is attributed to nitrogen fixation and nutrient acquisition through phytohormone synthesis. The effects of fungal endophytes on plants can be linked to the phytohormone production potential. In the indirect mechanisms, fungal endophytes tend to boost plant tolerance to stress-adaptor emanating from the environment, as well as exhibiting antibiosis against phytopathogens through the synthesis of secondary metabolites [11]. Notably, exploration of certain metabolites such as indole compounds from endophytic fungi Alternaria alternata and Fusarium tricinctum isolated from the leaves of Solanum nigrum with plant growth-promoting potential have been reported to improve rice yield upon application [12]. In addition, the nitrogen level in a soil inoculated with fungal endophytes for growing tall fescue and clover red has been reported with a remarkable difference in the nitrogen bioavailability in the soil for the experimental plants compared with the uninoculated plants [13].

Research into the microbial world of plants is currently of major interest with great promise in agricultural biotechnology. The potential of fungal endophytes associated with plants has gained attention for their exploration in formulating environmentally-friendly bioproducts. Thus, screening of fungal endophytes for possible plant growth-promoting traits can underline their mechanism of interactions with the host plants. More also, understanding the pattern and dynamic structures of fungal endophytes in the plant endosphere will help harness their potential in formulating bioinoculants to enhance plant growth, crop yield, and sustain plant health. 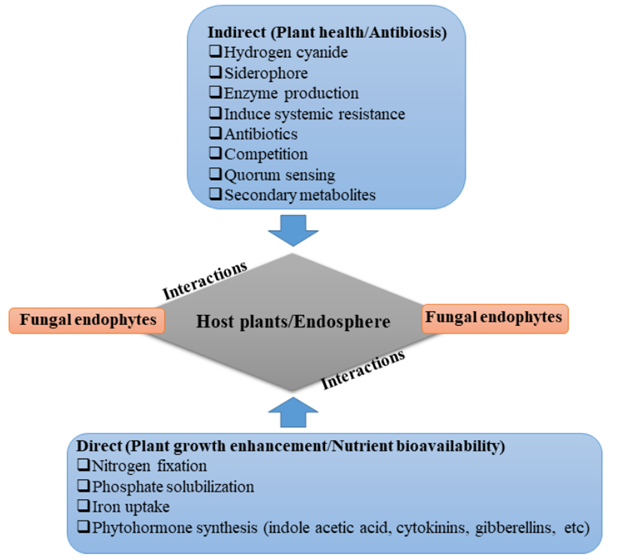