In recent years, optical phased arrays (OPAs) have attracted a great deal of attention. At optical wavelengths, small diffraction angles for a given aperture size can be achieved, compared with microwave radar systems. Featured by precise and agile free-space beam forming and steering [1][2][3][4][5][6][7][8][9][10][11][12], OPA techniques are highly desirable. However, current commercially available OPA components are mainly based on mechanical control, such as motor-driven rotating collimation stages/mirrors. Mechanical beam steering provides high efficiency and a relatively large scanning angle, through mechanically moving parts such as a gimbal, which can be susceptible to mechanical wear and tear, less stable, and limited in speed [13][14] due to the masses involved. The bulky mechanical steering approach is less preferred as it typically degrades in performance due to acceleration, temperature, vibration, and inertial forces. Additionally, mechanical steering often consumes significant energy. Furthermore, they require a complex assembly and calibration process, causing a greatly high unit cost. More importantly, these mechanical approaches are only capable of steering a single light beam. Arbitrary pointing and rapid steering as needed for advanced communication and sensing applications then become difficult or even incapable [14][15][16][17][18][19].

As one of the promising solutions for the next-generation dynamic beam steering, integrated OPAs simultaneously possess the advantages of being stable, rapid, and precise without relying on any mechanical motion, making them robust and insensitive to external constraints such as accelerations. Some of the integrated OPAs are presented in Figure 1. A wire-bonded device on a chip carrier plugged into a breadboard is presented in Figure 1a. Figure 1b shows a one-dimensional 64-channel chip-scale blue light phased array. A kind of III-V/Si phase-shifter-based OPA is shown in Figure 1c. Figure 1d is the photo of a fabricated OPA chip on a penny. Using an integrated approach, the OPAs can be made very small.

The Fraunhofer diffraction theory [24] can be used to describe the far-field interference of OPAs, in which scalar field e in the x0y0-plane diffracts to the x1y1-plane at a large distance z0 [13], following the rule below:

where k is the free-space wave vector. For the N × M OPA presented in Figure 2a, the far field at a certain point r is the far-field pattern of one element, i.e., F (θx, θy), multiplied by the sum of all the phase factors [13]:

where R = |r|, Axy is the field amplitude, βxy is the relative phase at each element, k0 is the free-space wave vector, and Sxy is the position of the radiating element. θx and θy indicate the angle of x- and y-direction, respectively. For uniform arrays [13], the far field is:

where γ is a phase factor determined by

where Λx and Λy are the element spacing along the x- and y-axis, respectively. Δφx and Δφy are the phase differences.

Figure 2. (a) Schematic of an OPA based on WGAs. Reprinted with permission from [13], © Gent University. (b) An OPA based on EF structures. Reproduced from [18] published by De Gruyter, 2016.

In principle, the far-field radiation pattern of OPAs is calculated by the far field of individual antenna multiplied by the array factor [10][25][26]. The far-field pattern can be desirably modulated based on this theory.

where δx is the element size of the N-element OPA, I0 stands for the unitary peak intensity in the far field of a single element, and θx indicates the angle of x-direction. The identical phase difference of Δφx is applied between adjacent channels placed at a pitch of Λx. The EF OPAs are commonly used to achieve 1D beam forming and steering by phase-shifting between waveguides. As shown in Figure 3a, the first fabricated OPA with a half-wavelength element spacing is used to demonstrate beam steering over a range of 64° by integrated thermo-optic (TO) heaters. The measured intensity of the horizontal cross sections and stitched-together captured images are presented at the top and the bottom [28]. 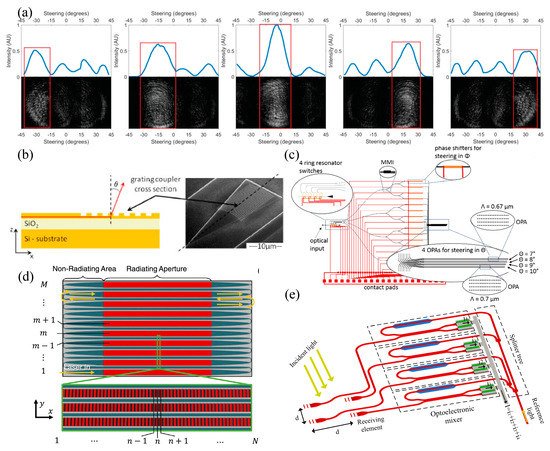 2.3. Beam Steering Based on WGAs

Nearly all the proposed 2D OPAs till now depend on WGAs. Not all the 2D OPAs’ far-field patterns are completely formed by phase differences. There are some other steering approaches.

Integrated photonics paves the way for low-cost large-scale OPA chips. As presented in Figure 4, typically, there are four necessary parts in an OPA: laser source, beam splitters, phase shifters, and emitters [12], for efficient light generation, manipulation, and chip-to-free-space transmission. We will discuss each part in detail in this section. Then a brief overview about overlayers and buried oxide (BOX) layers is given. The optimized thicknesses of the overlayers and BOX layers enhance the upward radiation of WGAs. 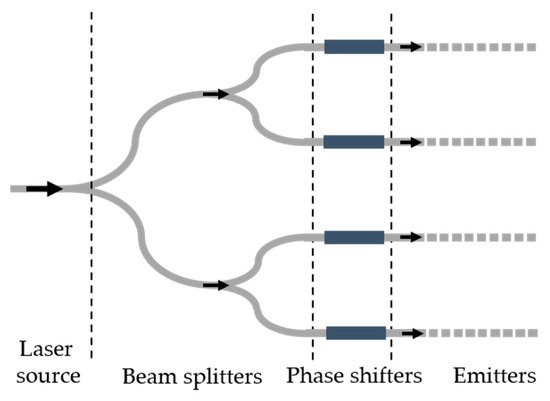 In terms of emitter types, OPAs can be sorted into EF OPAs, WGA-based OPAs, and OPAs based on other emitter structures.

Typically, EF OPAs can only be tuned by the phase difference between adjacent elements. As presented in Figure 5a, the first experimentally demonstrated aperiodic OPA was implemented on SOI [9]. The 12-channel unequal spaced OPA with a silica (SiO2) overlay and individual TO phase shifters enabled an FOV of 31.9° at 1.55 μm [9].

The first OPA introduced in Si photonics was implemented based on WGA structures, as presented in Figure 6a. The 1D 16-element WGA-based OPA was fabricated on the SOI platform. An FOV of 2.3° × 14.1° was demonstrated with both TO phase modulation and wavelength tuning [7]. A 4 × 4 WGA-based OPA with an FOV of 1.5° was subsequently realized by the same group (Figure 6b). Wavelength tuning based on grating dispersion was exploited to decrease the number of phase controls [8]. The achieved FOV of 1.5° is relatively narrow due to the small fill factor of the OPA, which can be further improved by redesigning OPA with a proper fill factor. An 8 × 8 WGA-based OPA with Si heaters presented in Figure 6c enabled an FOV of 6° × 6° and a beamwidth of 1.6° × 1.6°. Lightly doped Si waveguides, which provided considerable resistances and low optical losses, and heavily doped Si leads were used as heaters to drop most of the heating power on waveguides. Zigzagged Si lead structures were used to increase the heating length and to provide thermal isolations between waveguides and metal contacts. The measured TO efficiency was about 8.5 mW per π phase shift [25].

The main evaluation parameters of OPAs, which are FOVs, beamwidths and sidelobe suppression, modulation speeds, power consumption. It is important to note that one of critical factors determining FOVs, beamwidths and sidelobe suppression is the crosstalk and suppression among arrayed waveguide channels, and the efforts paid to reduce it should be reviewed first. For high-performance applications, large-scale OPAs are necessary. The scalability of OPAs will also be discussed. Finally, the calibration of OPAs to compensate for fabrication errors and mitigate crosstalk will be shown.

For applications based on precise beam forming and steering, WGAs with normal direction radiation [37][39] as well as structures with plateau envelops [26][39][40] can be highly desirable Modulation speeds are greatly enhanced by EO phase shifters based on the carrier density changing function. Monolithically integrated LiNbO3 EO phase shifters [41] and contact graphene heaters with high efficiencies and operation speeds, low power consumption [42] can be used for excellent EO modulations. To decrease optical losses of sharp waveguide bends, 45° angle placed antennas may be used to enable optical routing through two sides of the aperture [36]. Fabrication errors need to be carefully treated [43].