New virus-based sensor systems that operate on M13 bacteriophage infrastructure have attracted considerable attention. These systems can detect a range of chemicals with excellent sensitivity and selectivity. Filaments consistent with M13 bacteriophages can be ordered by highly established forms of self-assembly. This allows M13 bacteriophages to build a homogeneous distribution and infiltrate the network structure of nanostructures under mild conditions.

Distinguishing infinitesimal amounts of chemicals or microbials in a precise and simple manner is one of the most important techniques in academia and industry. Classical sensor technology is categorized as electromagnetic (gamma radiation, optics, microwave, radio wave, and Eddy current), mechanical (sound, MEMS, and fluid), magnetic, chemical (affinity, catalytic reactions, electrochemistry, and biochemistry), nuclear (nuclear magnetic resonance), and a combination of them (opto-acoustics and membrane technology) [1][2]. Generally, the key features of sensor technology are the low cost, small size, robustness, selectivity, and sensitivity [1][3].

Recently, the use of ecofriendly materials has been one of the main points in research and industrial manufacturing. The M13 bacteriophage, which can be categorized as a natural polymer, has been a major research focus owing to its target-specific response in chemical reactions with outstanding sensitivity [4]. The bacteriophage is a human-safe viral material that only infects certain criteria of bacteria, such as Escherichia coli. [5].

The filamentous type of M13 consists of approximately 2700 copies of the spirally arranged pVIII major coat protein on the body, with 5 to 7 copies of pIII, pVI, pIX, and pVII minor coat proteins at each end. M13 has a regular form, with a length and diameter of ~880 nm and ~6.6 nm, respectively. The genome structure and protein sequences of the M13 bacteriophage are fully understood. Therefore, M13 bacteriophages are very simple to genetically engineer to achieve the desired biochemical properties [6][7][8][9]. Figure 1 shows the basic protein structures and genetic engineering pathways of M13 bacteriophages. For example, genetically modifying the pVIII protein of M13 bacteriophage to possess the tryptophan–histidine–tryptophan (WHW) peptide sequence results in it showing specific binding affinity to nitrotoluene derivatives [4][10][11][12][13][14]. Consequently, the specific binding affinity to target materials, including chemical and biological materials, by simple genetic engineering provides great possibilities to use M13 bacteriophages as the core material of sensors. 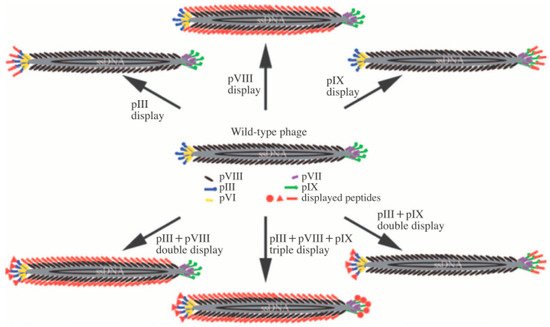 Figure 1. Basic structure of the M13 bacteriophage and the possible pathway of generic engineering. Reproduced from [9], with permission from WILEY-VCH, 2009.

M13 bacteriophages have a filamentous shape and different protein configurations at each end. One end has the pVI and pIII protein and the other has the pVII and pIX protein. By the well-defined, anisotropic structure and monodispersity caused by the natural character of M13, the material can be fabricated easily in hierarchical self-assembled structures using appropriate techniques [4][14]. The structure and behavior of M13 bacteriophages during fabrication are similar to those of liquid crystals. The bacteriophage can also be modified chemically and genetically to reveal a range of features, such as desired functionality and target-specific affiliation [11][12][13].

An additional outstanding benefit of M13 bacteriophages is the easy genetic modification for the specific binding affinity to definite target substances. Each coat protein can be modified genetically using phage display technology. Random phage libraries containing more than 1.0 × 1011 random peptide sequences of M13 bacteriophages are screened for specific target materials [19][20]. The binding phage on the target material is then selected and the bacteria are infected and amplified. After repeating this process to isolate the target-specific binding phage, the target-specific peptide can be recognized by DNA analysis [21][22]. Recently, the technology has developed a M13 bacteriophage that binds specifically to several inorganic resources, e.g., GaAs, GaN, Ag, Pt, Au, Pd, Ge, Ti, SiO2, quartz, CaCO3, ZnS, CdS, Co, TiO2, ZnO, CoPt, FePt, BaTiO3, CaMoO4, and hydroxyapatite [21][22][23][24][25]. The M13 bacteriophage can be made to have specific functionality by genetically engineering to carbon-based nanomaterials, such as C60, graphene, and carbon nanotubes [24][25]. Moreover, these specific binding capacities of the M13 bacteriophage can be used as templates to produce various nanostructures, such as highly monodisperse nanostructures [26][27][28]. This review introduces the current advances of M13 bacteriophage-based biosensors. 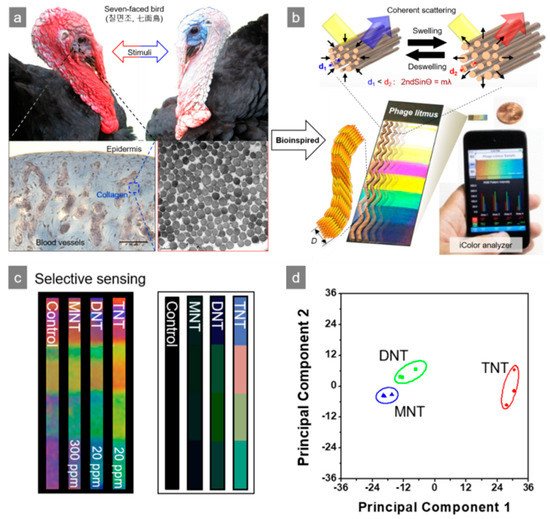