The Relation of KLF11 to Cancers

KLF11 (Krüppel-like factor 11) belongs to the family of Sp1/Krüppel-like zinc finger transcription factors that play important roles in a variety of cell types and tissues. In carcinogenesis, KLF11 can show diverse effects. Its function as a tumor suppressor gene can be suppressed by phosphorylation of its binding domains via oncogenic pathways. However, KLF 11 itself can also show tumor-promoting effects and seems to have a crucial role in the epithelial-mesenchymal transition (EMT) process.

Given the described role of KLF11 in growth regulation, it is not surprising that KLF11 has also been implicated in the development of tumors. In carcinogenesis, the TGF-β signaling pathway plays a dual role characterized by tumor suppression at early tumor stages and enhanced tumor progression at the late stages of the disease [[1][2][3]]. TGF-β mediates tumor suppression via Smad-dependent signaling, which then regulates the transcription of cell-cycle-associated genes like p15 and p21 [[4][5]]. But Smad7 also exerts a negative feedback loop by binding to the activated TβR-I, blocking it and preventing phosphorylation [[6][7]]. Disturbances in the Smad-dependent signaling have recently been shown in human cancers (including pancreatic cancer), and are associated with the ability of tumor cells to escape from the TGF-β–induced growth inhibition [[8][9]]. TGF-β may also signal through Smad-independent signaling cascades (e.g., Rho-like guanosine triphosphatases, p38, mitogen-activated protein kinase [MAPK], phosphatidylinositol-3-kinase or c-Jun-N-terminal kinase) and induce an epithelial-to-mesenchymal transition (EMT)—which is a key process in the formation of cancer metastasis—of tumor cells, leading to enhanced tumor cell migration and invasion [[10][11][12][13][14]].

KLF11, as discussed above, is an early response transcription factor that potentiates the TGF-β induced growth inhibition in normal epithelial cells by terminating the inhibitory Smad7 loop. In pancreatic cancer cells with oncogenic Ras mutations, this function of KLF11 is inhibited by the oncogenic Erk/MAPK: Erk/MAPK phosphorylates KLF11, which leads to the disruption of the KLF11–mSin3a interaction [[15]]. This inhibits the binding of the KLF11–Smads complex to the TIE element and leads to a reduced TGF-β-induced c-myc repression and to a reduction of the anti-proliferative effects of TGF-β [[16]]. Another study showsd that KLF11 is inhibited in CHO cells by the epidermal growth factor (EGF)–Ras–MEK1–ERK2 signaling pathway. Like in the Erk/MAPK pathway, phosphorylation of four serine/threonine sites adjacent to the SID leads to the disruption of the SID–mSin3A interaction [[17]]. In KRAS oncogenic mutant cancer cells, KLF11 inhibits BrdU incorporation, increases apoptosis, and inhibits the KRAS-mediated foci and agar colony formation. In vivo, KLF11 partly inhibits the growth of pancreatic tumor cells of KRAS mutant xenografts, by inducing cell cycle arrest at the S phase via downregulation of cyclin A2 [[18]]. Therefore, KLF11 might participate in the functional switch of TGF-β from a tumor suppressor to a tumor promoter. Figure 1 gives an overview of the different roles of the KLF11-mediated TGF-β–TGF-receptor–Smad signaling pathway in normal cells and tumors.

In addition to the inhibition of KLF11 by SID phosphorylation via Erk/MAPK, Buttar et al. [[19]] suggested an additional model of KLF11-mediated tumor suppression and its antagonism by an oncogenic pathway. KLF11 binds to the GC-rich consensus sequences in the promoter region of cPLA2α, the key rate-limiting enzyme of the oncogenic PGE2 cascade. Following binding, KLF11 represses the cPLA2α promoter by recruiting the chromatin-remodeling complex Sin3a-HDAC to the promotor. In this way, KLF11 behaves as a tumor suppressor gene by repression of the cPLA2α–PGE2 pathway. This mechanism was shown in Barrett’s epithelial cells. EGFR-AKT signaling, which is upregulated in a subset of patients during carcinogenesis in Barrett’s esophagus cancer, leads to the phosphorylation of threonine at position 56 in the R1 domain (SID) of KLF11. This phosphorylation inhibits the KLF11 binding, and the repression of the cPLA2α promoter and the tumor-suppressing effects of KLF11 are inhibited. Probably EGFR can use two different intracellular pathways (ERK2 versus AKT) to inactivate KLF11 via phosphorylation. These phosphorylation events expand our biochemical knowledge about KLF11 to the post-translational effects.

On the contrary, direct tumor-promoting effects of KLF11 have also been described. In hepatocellular carcinoma, KLF11 had a significant influence on proliferation and apoptosis. It also promoted local invasion and distant migration by suppressing the Smad7 transcription via binding to the Smad7 promoter or by directly upregulating the Smad2/3 expression [[20][21]]. Ji Q et al. demonstrated that the relative Twist1 promoter region activity increased gradually with increasing KLF11 levels in the plasma [[22]]. Therefore, they speculated that KLF11 might regulate gastric cancer migration and invasion by increasing the Twist1 expression, which is essential for EMT [[22]]. 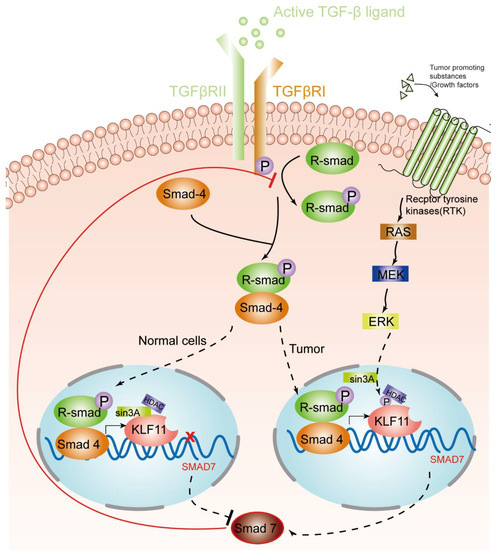 Figure 1. KLF11-mediated modulation of the TGF-β signaling pathway in normal cells and tumors. An activated TGF-β ligand binds to the type 2 domain of the TGF-β receptor, which then recruits and phosphorylates a type 1 receptor. The type 1 receptor then recruits and phosphorylates a receptor-regulated Smad (R-smad). The R-smad then binds to the common smad, Smad 4, and forms a heterodimeric complex. The Smad complex translocates to the nucleus to induce the expression of KLF11. In normal cells, the KLF11-Sin3A-HDAC complex binds to the promoters of Smad7 and represses its expression, which acts as a negative feedback loop of the TGF-β–Smads signaling pathway. However, in some tumors, RAS was activated by tumor-promoting substances/growth factors. Ras phosphates KLF11 by the RAS–MEK–ERK pathway, which leads to the disruption of the KLF11–mSin3a interaction, resulting in the termination of the inhibitory KLF11-mediated Smad7 loop.

KLF11-methylation-dependent inactivation and downregulation occurs in several malignancies, including leukemia, myeloproliferative disorders, esophageal adenocarcinoma, pancreatic cancer, germ cell tumors, ovarian cancer, and head and neck cancer, supporting its candidacy as an actual tumor suppressor gene in humans [[19][23][24][25][26][27][28]]. KLF11 is involved in the progression of a wide variety of cancers, such as ovarian cancer and pancreatic cancer [[16][28]]. In breast cancer, the KLF11 promotor is also hypermethylated, and the hypermethylation is associated with low expression of KLF11. KLF11 hypermethylation might be associated with higher rates of metastases [[29]]. Similar results were found in uterine fibroids and in myelodysplastic syndrome [[24][30]], suggesting that DNA methylation to regulate KLF11 expression might be a key event that directly contributes to tumorigenesis.

It was recently reported that the microRNA miR-30d increased the survival of BT474 and MDA-MB-231 breast cancer cells. It was shown that it inhibited apoptosis and increased Bcl-2 expression, while it reduced the Bax protein levels. This influence of miR-30d on breast cancer cell growth, metastasis, and EMT is dependent on a low level of KLF11 and on a high level of pSTAT3. KLF11 is a direct target of miR-30d, and KLF11 and pSTAT3 expression are regulated by miR-30d [[31]].

MiR-30 also reduced the profibrogenic TGF-β signaling in hepatic stellate cells by suppressing the KLF11 expression and thus enhancing the negative feedback loop of TGF-β signaling imposed by Smad7 [[32]]. LincRNA-p21 reduced the availability of miR-30 [[33]]. Besides miR-30d, overexpression of miR-10b in hepatocellular carcinoma (HCC) promoted HCC cell migration and invasion. MiR-10b downregulated KLF4, which is the inhibitory transcriptional factor of KLF11. In this way, KLF11 was upregulated, which promoted HCC EMT [[21]].

All these results suggest that KLF11 plays a crucial role during tumorigenesis and development. (Table 1.).