Submitted Successfully!
Thank you for your contribution! You can also upload a video entry related to this topic through the link below:
https://encyclopedia.pub/user/video_add?id=9278
Check Note
2000/2000
Warfarin
Edit
Upload a video
This entry is adapted from 10.3390/cells10040773

Warfarin has been utilized for decades as an effective anticoagulant in patients with a history of strong risk factors for venous thromboembolism (VTE).

In 1921, cattle in North Dakota and Canada began dying mysteriously after suffering from severe internal bleeding. Farmers had switched their cattle fodder from corn to sweet clover hay species Melilotus alba and Melilotus officinalis [1]. If these species are stored in damp conditions, they are prone to infection by molds. The spoiling process can convert the plants’ natural coumarins into dicumarol, which has anticoagulant properties [2]. Veterinarians Frank Schofield and Lee Roderick determined that cattle consuming spoiled sweet clover were affected by the disease [3]. In the 1930s, Karl Paul Link discovered that the culprit molecule was dicoumarol, and in the 1940s, warfarin began to be used as rodenticide [4]. Warfarin was introduced as an anticoagulant in the 1940s and after further testing, was approved for use as an anticoagulant in the United States in 1954 [1]. Notably, President Dwight Eisenhower was treated for a myocardial infarction (MI) with warfarin in 1955, after which it began to become a household name and started to be more widely used in the 1960s.

2. Mechanism of Action and Properties

Factors II, VII, IX, and X and proteins C and S are blood clotting factors synthesized as inactive precursors. They undergo a vitamin-K-dependent post-translational modification, which involves the gamma carboxylation of glutamic acid residues [5]. These gamma-carboxyglutamyl residues bind calcium ions and are necessary for interaction with platelets. The complex of clotting factors with calcium ions binds phospholipids on platelets. The reaction is catalyzed by gamma-glutamyl carboxylase and requires carbon dioxide, oxygen, and the reduced form of vitamin K [5]. The reduced vitamin K cofactor is converted to vitamin K epoxide during the reaction. Vitamin K is regenerated from the epoxide by vitamin K epoxide reductase (Figure 1). Warfarin acts by inhibiting vitamin K epoxide reductase (Figure 2). The four coagulation factors involved have differing half-lives, up to 60 h [5]. 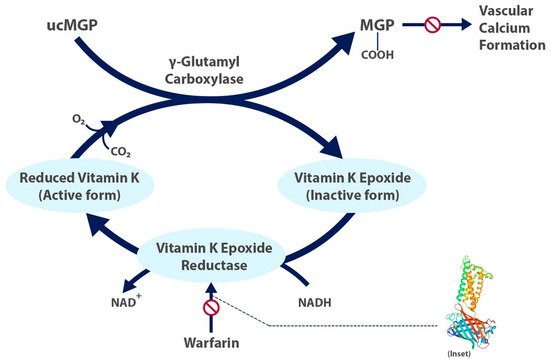 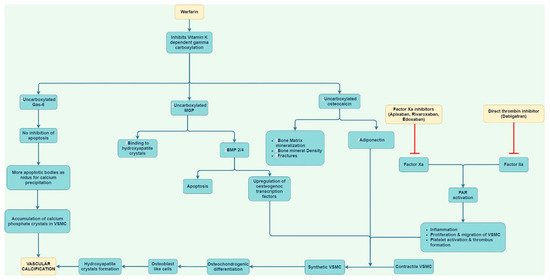 Factor VII has a half-life of 6 h, and therefore, warfarin begins to have an effect within approximately 24 h. Consequently, reversal following administration of vitamin K takes approximately 24 h. The peak effect may take up to 96 h. Protein C is a vitamin-K-dependent serine protease activated by thrombin. The activated form uses protein S as a cofactor and degrades factors Va and VIIIa. Both protein C and S are anticoagulant factors, and for this reason, a bridging agent, usually heparin, is necessary during a temporary hypercoagulable state that occurs before warfarin begins to take effect. Warfarin has no direct effect on an established thrombus, but once a thrombus has occurred, the goal of treatment is to prevent further enlargement of the formed clot. The anticoagulant effects of warfarin can be overcome by the administration of vitamin K.

The chemical properties of warfarin can influence metabolism and dosing in clinical practice. Warfarin is administered in the form of a racemic mixture of R and S enantiomers. The S-enantiomer is more active and possesses 2–5 times greater potency than the R-enantiomer [7][8]. Each isomer is metabolized distinctly in the liver. Oxidative metabolism of the S- isomer is affected by CYP2C9 [7]. The two most common genetic polymporphisms of CYP2C9 are CYP2C9*2 and CYP2C9*3 [8]. Multiple studies have confirmed that patients with these enzyme variants have reduced enzyme activity and require lower doses of warfarin to maintain a therapeutic INR [8].

More
© Text is available under the terms and conditions of the Creative Commons Attribution (CC BY) license; additional terms may apply. By using this site, you agree to the Terms and Conditions and Privacy Policy.
Upload a video for this entry
Information
Subjects: Cardiac & Cardiovascular Systems
Contributor MDPI registered users' name will be linked to their SciProfiles pages. To register with us, please refer to https://encyclopedia.pub/register :
Kalaimani Elango
View Times: 724
Revisions: 2 times (View History)
Update Time: 05 May 2021
Table of Contents
1000/1000
Hot Most Recent