Submitted Successfully!
Thank you for your contribution! You can also upload a video entry related to this topic through the link below:
https://encyclopedia.pub/user/video_add?id=890
Check Note
2000/2000
Monitoring Lower-Limb Strength
Edit
Upload a video
This entry is adapted from 10.3390/s20071975

The 30-s CST is a physical performance assessment tool; in particular, it measures lower-limb strength. It does so by quantifying the ability of older patients to repeatedly stand up from a chair, by specifically counting the number of times they stand up over thirty seconds. Poor physical performance in older patients is strongly related to undesired clinical outcomes such as disability, hospitalization, deaths, and falls. Disability and all these related outcomes are the culmination of a progressive process of physiological decline. A successful aging path will delay the onset of disability as late in life as possible (green line in Figure 1) as opposed to an unsuccessful aging path that will involve being disabled for several years (red line in Figure 1). 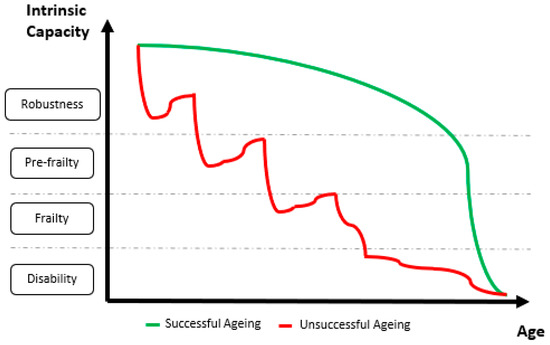 Within the context of an aging population, the social and the economic impacts of delaying the onset of dependency would be enormous because poor functionality has a strong impact on patients’ and relatives’ quality of life and makes them big users of health and social services. However, despite the remarkable increase in longevity enabled by healthcare systems, they do not achieve an extension of the period of good health and functionality. Fortunately, it is indeed possible to extend good health and functionality because, even though disability is not reversible, it is preceded by a reversible stage known as frailty. By detecting the onset of frailty at early stages, frail people can be restored back to a robust status thanks to exercise-based interventions.

Several models were proposed to explain frailty, which is defined as a state of increased vulnerability to adverse outcomes due to a reduction in the ability to respond to stressors. Of course, all of these models identify physical performance as a strong frailty marker. In particular, lower-limb strength is one of the criteria for patient frailty stratification according to the frailty phenotypic model. There are multiple clinical tests to assess lower-limb strength; the most remarkable of them are based on assessing performance under repeated sit-to-stand conditions. The Short Physical Performance Battery (SPPB), for instance, is based on recording how long it takes for an older person to repeatedly stand up from a chair five times. Conversely, the 30-s CST is based on recording how many times a person stands up from a chair over 30 s. Any of them can be found in comprehensive geriatric assessment (CGA) tools, which are proposed as the most valuable tools to inquire the advance of frailty, to predict and prevent sudden adverse events, and to develop intervention plans for the delay and reversal of the onset of frailty.

An automated version of the 30-s CST is expected to count the same number of completed cycles as a manual count would do. It requires the automatic identification and delimitation of sit–stand–sit (STS) cycles and the ability to automatically spot and dismiss failed attempts (i.e., when the subject does not reach an upright posture). Inertial sensors and inertial measurement units (IMUs) were extensively used to study sit-to-stand and stand-to-sit transitions, as well as STS cycles, over the past three decades. Some of these studies looked for relationships between different kinematic parameters and the functional status (robust, pre-frail, frail) of the experimental subjects. A very popular approach is based on taking advantage of the quasi-periodic nature of the trunk movement during STS cycles. To do so, previous works used signals from an IMU on the subject’s lower back.

The wearable devices described above require the IMUs to be placed on the L3 region of the subject’s lumbar spine. Older people might experience some difficulties in placing them on the correct spot, especially if they do not have any help to put them on. These previous studies did not study their algorithm sensitivity to misplacing the sensor; therefore, further studies are necessary to test the usability of these kinds of systems for an older population, as well as to assess the elders’ overall user experience, especially outside controlled experimental settings.

Cobo et al. studied the feasibility of using the quasi-periodic nature of the distance between a subject's back and the chair backrest during a 30-s CST to carry out unsupervised measurements based on readings from a low-cost ultrasound sensor.

Signals from young healthy subjects show a few spurious spikes even after removing outliers in a pre-processing stage (green line in Figure 2). These spikes are indeed outliers that fell below the threshold in the pre-processing stage. Legitimate peaks up to 50 cm have been observed to be rather common. Nevertheless, lowering the pre-processing threshold to 50 cm did not show any significant improvement. Therefore, keeping the pre-processing threshold high prevents from making any legitimate peaks unrecognizable. Spurious spikes from young healthy subjects are narrow, spaced wide apart, and scarce. Therefore, they can be remove by a moving median filter (blue line in Figure 2). Even though they break the smooth progression of the curve, they do not affect the overall shape and the quasi-periodic nature of the signal. Therefore, all the peaks can be detected by identifying local maxima in the filtered signal (red dots in Figure 2) a deeper explanation of the processing algorithm can be found in [1]. 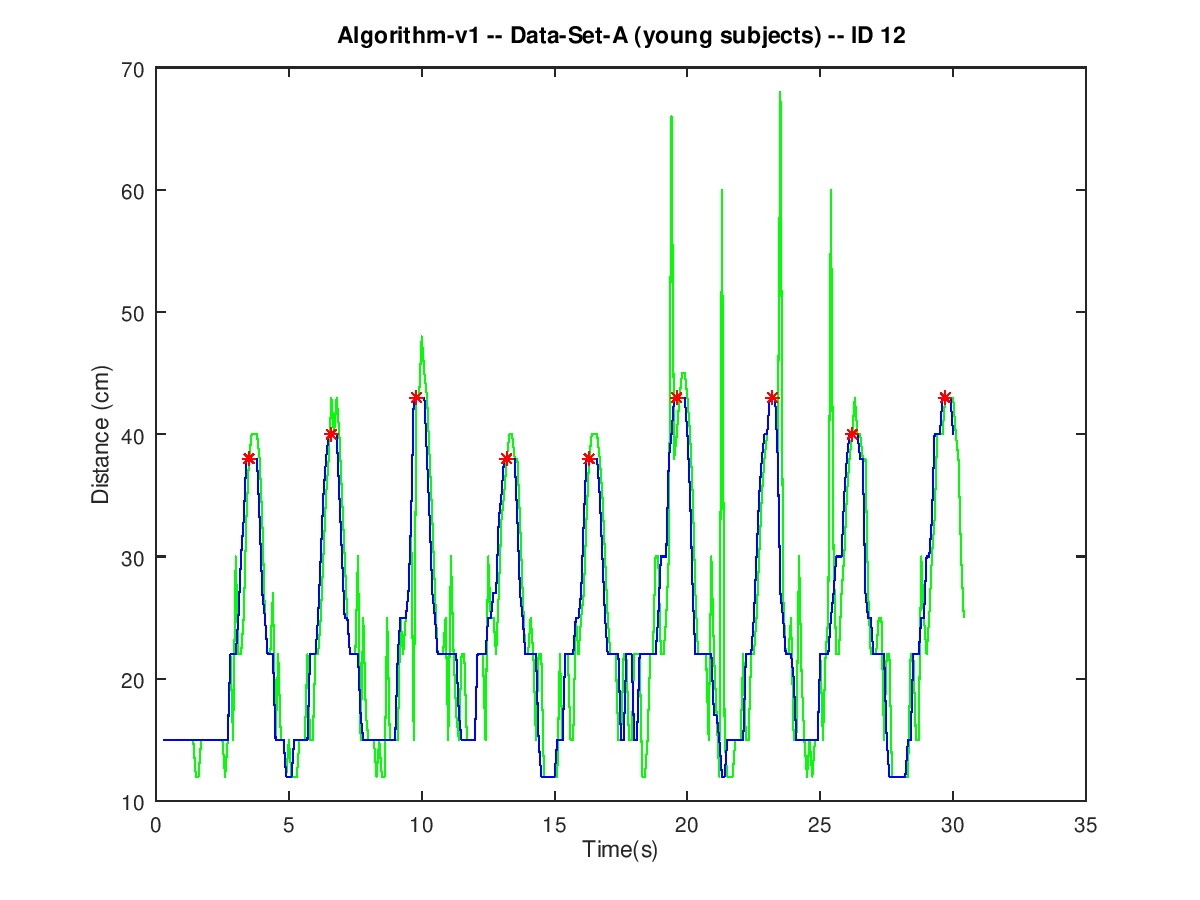 Figure 2. Graphical representation of a signal from a young healthy subject and the outcomes resulting from processing it with a moving median filter. The green line represents the pre-processed signal after removing all the outliers over a given threshold. The blue line represents the output of applying a moving median filter to the green signal. The red dots represent the sit-to-stand transitions identified and reported by locating local maxima.

Conversely, spurious spikes in signals from older adults are abundant and very close to each other (green line in Figure 3). Therefore, their contribution to the output of a moving median filter (blue line in Figure 3) could result in a such a significant distortion that the peak detection algorithm might mistake it for a legitimate peak (black dots in Figure 3). Figure 3. Graphical representation of a signal from an older subject and the outcomes resulting from processing it with a moving median filter. The green line represents the pre-processed signal after removing all the outliers over a given threshold. The blue line represents the output of applying a moving median filter to the green signal. The red dots represent legitimate sit-to-stand transitions identified and reported by the peak detection algorithm. The black dots represent sit-to-stand transistions erroneously identified and reported due to the effect of the spurious spikes in the green signal.

The source of the additional noise in the signals from older subjects is unclear. Functional decline (due to either normal aging or some condition, such as the frailty syndrome) imposes some mobility constraints on older people. Their movements become less precise and, during the experimentation, they might accidentally move the chair more prominently than their healthy young counterparts. For example, some of them need to lean back and forth repeatedly to gain some momentum and stand up.

The effect of such a noise can be cancelled by substituting the moving median filter for a moving minimum filter. The output of such a filter (blue line in Figure 4) follows the envelope of the local minima in the pre-processed signal (green line in Figure 4). Legitimate sit-to-stand events (red dots in Figure 4) are easier to spot on the envelope of the local minima because such a filtered signal is freed from the rapid variations of the spurious spikes. 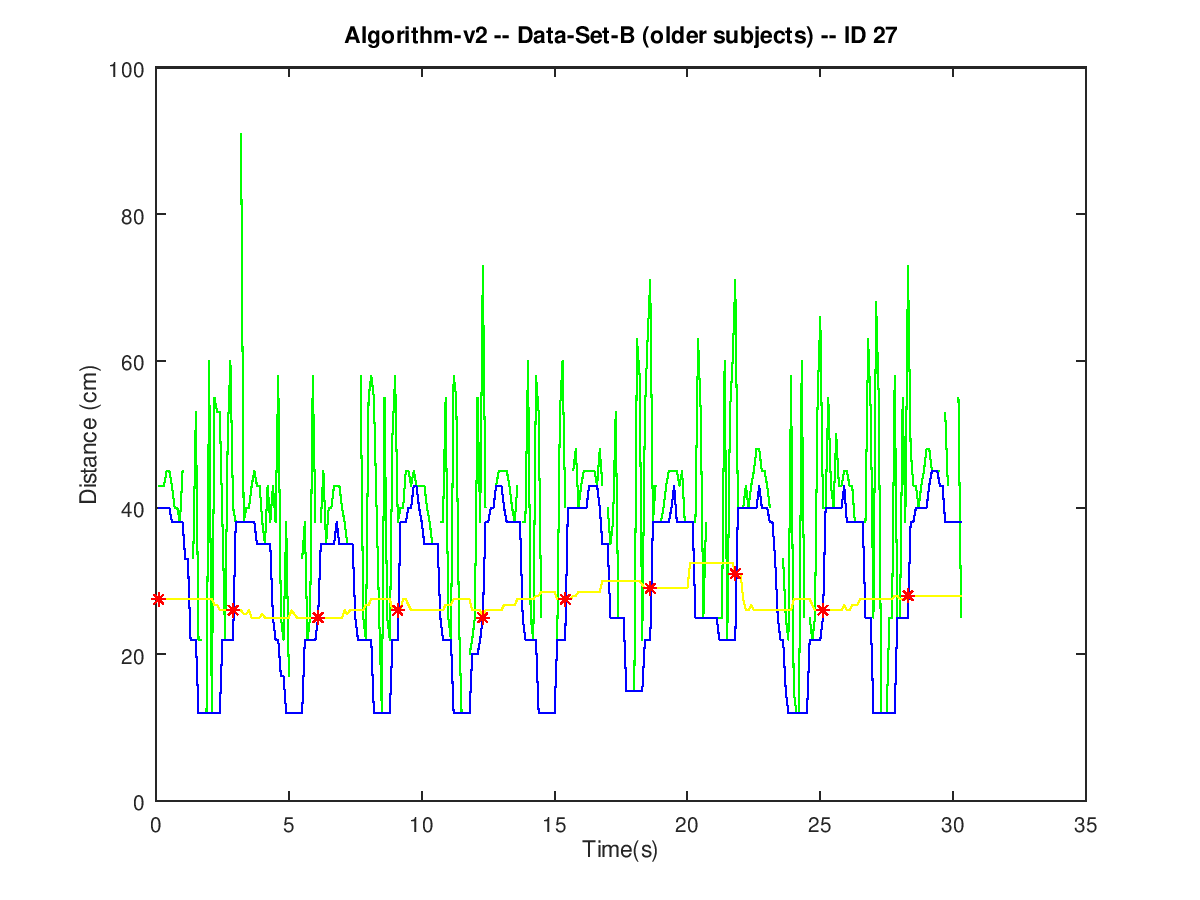 Figure 4. Graphical representation of a signal from an older subject and the outcomes resulting from processing it with a moving minimum filter. The green line represents the pre-processed signal after removing all the outliers over a given threshold. The blue line represents the output of applying a moving minimum filter to the green signal. The filter completely cancels the effect of the spurious spikes in the green signal. The red dots represent the sit-to-stand transitions identified and reported by the peak detection algorithm.

Even though a moving minimum filter cancels the effect of the spurious spikes, the outcome of the sensor does not always match manual count. The peak detection algorithm has been observed to have difficulties in correctly spotting sit-to-stand trnasitions when the value of the minima in the filtered signal is greater than 30 cm. This situation is hypothesized to happen whenever an elder does not lean back after sitting down on the chair. However, furhter experiments are necessary to explore this hypothesis.

More
© Text is available under the terms and conditions of the Creative Commons Attribution (CC BY) license; additional terms may apply. By using this site, you agree to the Terms and Conditions and Privacy Policy.
Upload a video for this entry
Information
Subjects: Engineering, Electrical & Electronic
Contributors MDPI registered users' name will be linked to their SciProfiles pages. To register with us, please refer to https://encyclopedia.pub/register :
Antonio Cobo
,
Elena Villalba Mora
View Times: 166
Revisions: 4 times (View History)
Update Time: 30 Oct 2020
Table of Contents
1000/1000
Hot Most Recent