Submitted Successfully!
Thank you for your contribution! You can also upload a video entry related to this topic through the link below:
https://encyclopedia.pub/user/video_add?id=8871
Check Note
2000/2000
Runx2 and Osteoblasts
Edit
Upload a video
This entry is adapted from 10.3390/ijms20071694

Runx2 is essential for osteoblast differentiation, chondrocyte maturation, and transdifferentiation of terminally differentiated chondrocytes into osteoblasts. During osteoblast differentiation, Runx2 is weakly expressed in uncommitted mesenchymal cells, and its expression is upregulated in preosteoblasts, reaches the maximal level in immature osteoblasts, and is down-regulated in mature osteoblasts. Runx2 enhances the proliferation of osteoblast progenitors by directly regulating Fgfr2 and Fgfr3. Runx2 enhances the proliferation of suture mesenchymal cells and induces their commitment into osteoblast lineage cells through the direct regulation of hedgehog (Ihh, Gli1, and Ptch1), Fgf (Fgfr2 and Fgfr3), Wnt (Tcf7, Wnt10b, and Wnt1), and Pthlh (Pthr1) signaling pathway genes, and Dlx5. Runx2 heterozygous mutation causes open fontanelle and sutures because more than half of the Runx2 gene dosage is required for the induction of these genes in suture mesenchymal cells. Runx2 induces the proliferation of osteoblast progenitors and their differentiation into osteoblasts through reciprocal regulation via major signaling pathways, including Fgf, hedgehog, Wnt, and Pthlh, and transcription factors, including Sp7 and Dlx5. Runx2 also regulates the expression of bone matrix protein genes, including Col1a1, Col1a2, Spp1, and Bglap/Bglap2. Bglap/Bglap2 (osteocalcin) aligns biological apatite parallel to the collagen fibrils, which is important for bone strength, but osteocalcin does not play a role as a hormone in the pancreas, testis, and muscle.

Runx2 belongs to the Runx family, which has the DNA-binding domain runt, and consists of Runx1, Runx2, and Runx3 [1]. Runx2 heterodimerizes with Cbfb and acquires enhanced DNA binding ability and protein stability [2][3][4][5][6]. Runx2-deficient (Runx2–/–) mice lack osteoblasts and bone formation, and chondrocyte maturation is markedly inhibited [7][8][9][10]. In osteoblast differentiation, Runx2 is expressed in uncommitted mesenchymal cells, and its expression is upregulated in preosteoblasts, reaches the maximum level in immature osteoblasts, and is down-regulated in mature osteoblasts [11][12]. Runx2 regulates the proliferation of osteoblast progenitors, their commitment to osteoblast lineage cells, and the expression of bone matrix protein genes.

2. Reciprocal Regulation of the Essential Transcription Factors for Osteoblast Differentiation 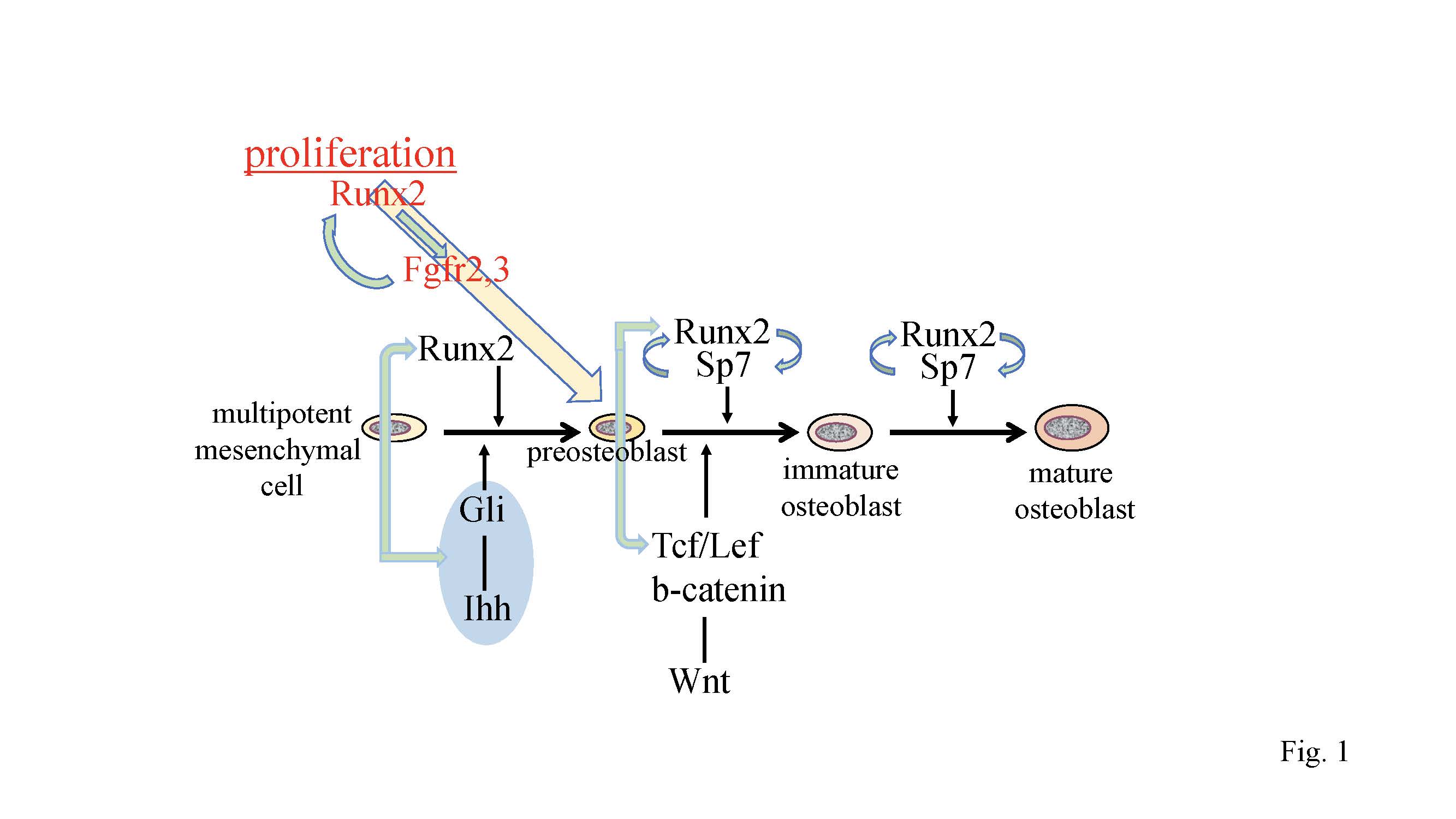 Runx2 directly regulates Sp7 expression, and osteoblasts and bone formation are also absent in Sp7–/– mice [23][24]. As Sp7 activates an osteoblast-specific enhancer of Runx2, Sp7 is also involved in the regulation of Runx2 expression [25] (Figure 1). Canonical Wnt signaling is also essential for osteoblast differentiation, because conditional Ctnnb1 knockout mice using Twist2 (Dermo1)-Cre, Col2a1-Cre, or Prrx1-Cre completely lack osteoblasts [26][27][28]. In these mice, Runx2 is expressed in the perichondrial cells, but Sp7 expression is weak or absent in perichondrial cells, indicating that osteoblast differentiation is arrested at the stage of preosteoblasts. Sp7–/– mice and conditional Ctnnb1–/– mice have abundant mesenchymal cells that express Runx2 in the presumptive bone region. As some of the mesenchymal cells in the perichondrium and calvaria differentiate into chondrocytes in Sp7–/– mice and conditional Ctnnb1–/– mice [26][27][28], Sp7 and canonical Wnt signaling inhibit chondrocyte differentiation and direct Runx2+ osteoblast progenitors to become osteoblasts (Figure 1).

3. Regulation of the Proliferation of Osteoblast Progenitors by Runx2

4. Molecular Mechanism of the Pathogenesis of Open Fontanelles and Sutures in Cleidocranial Dysplasia (CCD)

Although both intramembranous and endochondral bone development are affected in cleidocranial dysplasia (CCD), the open fontanelles and sutures and hypoplastic clavicles are typical features of CCD [12][35][36]. However, why the development of calvaria and clavicles is the most severely affected in CCD remains unclear.

In Runx2+/– mice, the closure of both posterior frontal (PF)  and sagittal (SAG) sutures was interrupted. The suture mesenchymal cells expressed Sox9 at a similar level in wild-type and Runx2+/– mice. The suture mesenchymal cells also expressed Runx2, but the expression level in Runx2+/– mice was half of that in wild-type mice. The cell density and cell proliferation in Runx2+/– sutures was less than those in wild-type mice. The expression of hedgehog signaling genes (Gli1, Ptch1, and Ihh), Fgf signaling genes (Fgfr2 and Fgfr3), Wnt signaling genes (Tcf7 and Wnt10b), Pth1r, Dlx5, Tnc, and Ncam1 were less in PF and SAG sutures of Runx2+/– mice than in those of wild-type mice. Overexpression or knockdown of Runx2 and ChIP analysis demonstrated that these genes are directly regulated by Runx2 (Figure 2). However, the expression levels of these genes, except Dlx5, were similar in calvarial bone tissues between wild-type and Runx2+/– mice. Furthermore, osteoblast marker gene expression was not reduced in the calvarial bone tissues of Runx2+/– mice. These findings indicate that more than half of the Runx2 gene dosage is required for the expression of these Runx2 target genes in suture mesenchymal cells, but half of the Runx2 gene dosage is sufficient for it in differentiated osteoblasts [12]. 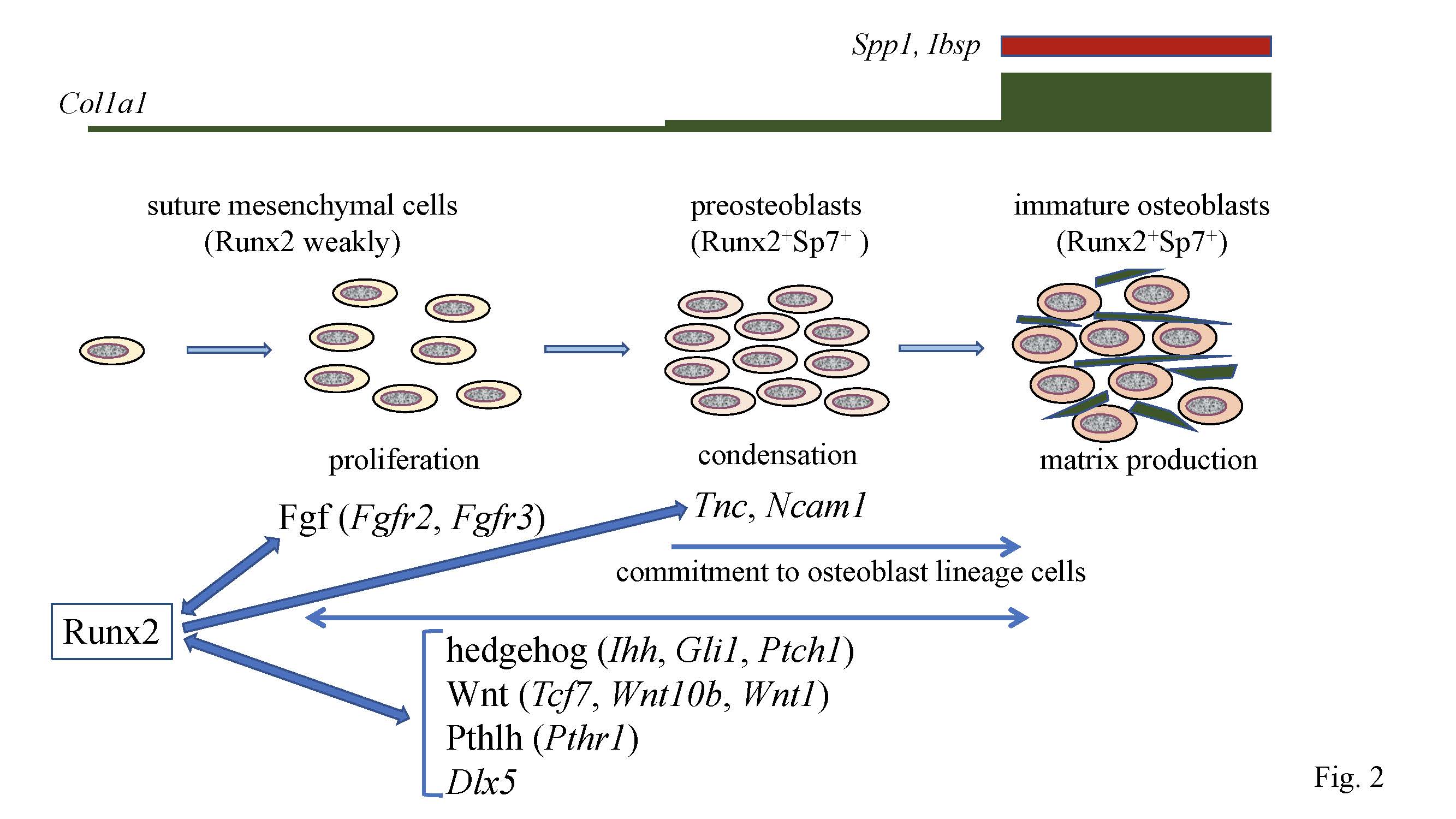 5. The Functions of Runx2 in Bone Matrix Protein Gene Expression

The functions of osteocalcin (Ocn), which is encoded by Bglap/Bglap2 that are directly regulated by Runx2, were controversial. Ocn was demonstrated to inhibit bone formation and function as a hormone, which regulates glucose metabolism in the pancreas, testosterone synthesis in the testis, and muscle mass, based on the phenotype of Ocn–/– mice by Karsenty’s group [51][52][53][54]. Recently, Ocn–/– mice were newly generated by two groups independently [55][56]. Bone strength is determined by bone quantity and quality. The new Ocn–/– mice revealed that Ocn is not involved in the regulation of bone formation and bone quantity, but that Ocn regulates bone quality by aligning biological apatite (BAp) parallel to the collagen fibrils [56]. Moreover, glucose metabolism, testosterone synthesis and spermatogenesis, and muscle mass were normal in the new Ocn–/– mice [55][56]. Thus, the function of Ocn is the adjustment of growth orientation of BAp parallel to the collagen fibrils, which is important for bone strength to the loading direction of the long bone. However, Ocn does not play a role as a hormone in the pancreas, testis, and muscle (Fig. 3) [57]. 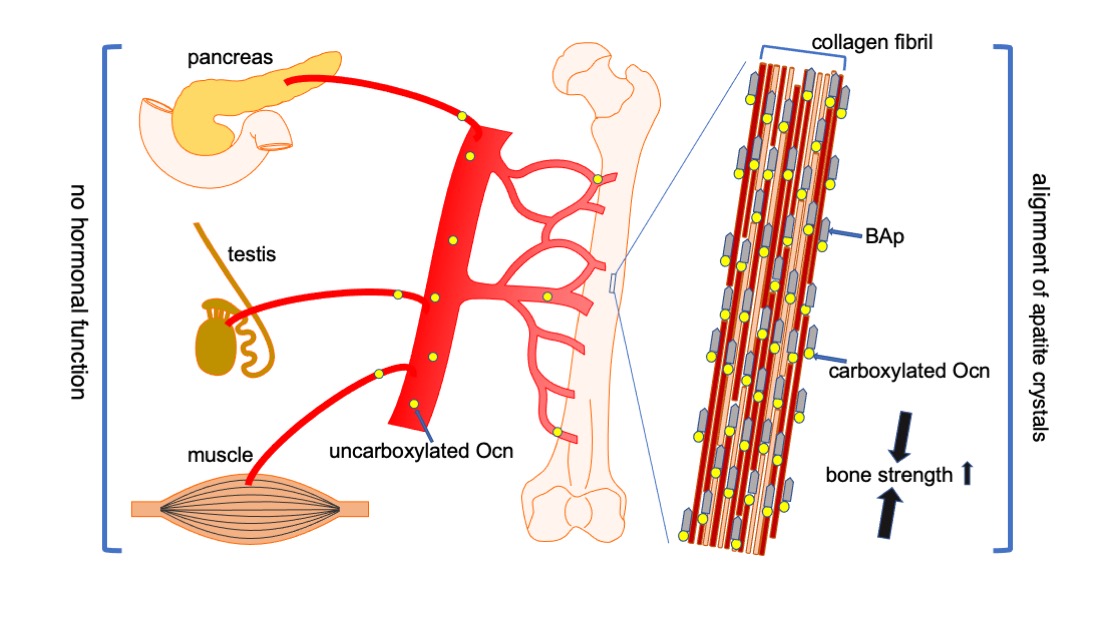 Figure 3. Functions of Ocn in bone, pancreas, testis, and muscle. Carboxylated Ocn is required for the alignment of BAp parallel to the collagen fibers and optimal bone strength. However, two newly generated Ocn–/– mouse lines and Ocn–/– rats [58] did not exhibit the impaired glucose metabolism, reduced testosterone synthesis and spermatogenesis, and reduced muscle mass observed in the Ocn–/– mouse line generated by Karsenty’s group. Thus, uncarboxylated Ocn does not physiologically function as a hormone that regulates glucose metabolism in the pancreas, testosterone synthesis in testis, or muscle mass.↑: Bone strength is increased by carboxylated Ocn regulates the alignment of .

Runx2 is required for the proliferation of preosteoblasts in whole skeletons and mesenchymal cells in sutures. Indeed, Runx2 is required for the commitment of mesenchymal cells to osteoblast lineage cells. Thus, Runx2 makes a condensed cell layer of uncommitted mesenchymal cells or osteoblast progenitors by increasing their proliferation and facilitates their differentiation into osteoblast lineage cells. Runx2 can exert multiple functions through reciprocal regulation via major signaling pathways, including Fgf, hedgehog, Wnt, and Pthlh, and transcription factors, including Sp7 and Dlx5. Osteoblast proliferation and differentiation are likely regulated by such reciprocal regulation rather than the cascade of transcription factors. Runx2 target protein Ocn regulates the alignment of BAp and is required for bone strength but not for glucose metabolism in the pancreas, testosterone synthesis in testis, or muscle mass.

More
©Text is available under the terms and conditions of Creative Commons-Attribution ShareAlike (CC BY-SA) license; additional terms may apply. By using this site, you agree to the Terms and Conditions and Privacy Policy.
Upload a video for this entry
Information
Subjects: Biology
Contributor MDPI registered users' name will be linked to their SciProfiles pages. To register with us, please refer to https://encyclopedia.pub/register :
Toshihisa Komori
View Times: 354
Revisions: 2 times (View History)
Update Time: 22 Apr 2021
Table of Contents
1000/1000
Hot Most Recent