Submitted Successfully!
Thank you for your contribution! You can also upload a video entry related to this topic through the link below:
https://encyclopedia.pub/user/video_add?id=875
Check Note
2000/2000
Sperm Cryopreservation Protocol
Edit
Upload a video
This entry is adapted from 10.3390/ani10040691

The storage of frozen sperm samples from birds in Germoplasm Banks could be a way out for the conservation of thousands of threatened species. The cryopreserved samples could be later used in reintroduction projects. This technology also allows for the selection of individuals of genetic interest and the exchange of samples between distant locations.
Although the sperm cryopreservation is greatly developed in domestic species, in birds it is still in its infancy. The objective of this study was optimize the cryopreservation protocol in a bird of prey, peregrine falcon (Falco peregrinus) which could be used as a model for other threats. Thus, the freezing/thawing protocol and the type and concentration of cryoprotectant were evaluated.

At present, the number of species threatened with extinction is above 28,000, of which 14% correspond to avian species [IUCN, 2019]. With fast changes currently occurring in the climate and habitats, thousands of species of wild animals are in danger of disappearing [IUCN, 2019]. A global effort is being made to create a solution for potential emergencies that could lead to the rapid extinction of species. With that in mind, captive breeding and the exchange of individuals between zoos are common practices around the world. However, space is limited, and it is impossible to maintain significant numbers of each existent species. A viable presented solution is the creation of a germplasm bank that contains the sperm, oocytes, or even embryos of the largest possible number of species [Pukazhenthi et al. 2004; Prieto et al. 2014].

Since the storage of eggs or embryos from birds poses a difficult challenge because of their large size and complexity, sperm cells are a good alternative [Long et al. 2013]. Sperm is fairly easy and inexpensive to acquire, and its cryopreservation is much more accessible compared with the oocyte/embryo, because of the small volume of water inside of the sperm [Rosen et al. 2019]. Furthermore, existing technologies allow the semen of many animal species to be collected and used [FAO, 2012]. Frozen semen can be a very important part of ex situ conservation efforts, since it allows for the storage of genetic material from multiple species for a long period of time. Stored semen can be used in reintroduction projects or to enlarge the genetic pool of a fragmented population. It also allows for the selection of individuals of genetic interest and the exchange of samples between distant locations [Brock et al. 1983; Villaverde-Morcillo et al. 2017]. In birds, frozen semen could become an increasingly relevant tool, because captive breeding programs are often slowed down by incompatibility between individuals or by stress, leading to the absence of mating [Bailey et al. 2017]. Cryopreservation of semen is a technique largely used in mammals, but, in birds, there are still some limitations. Avian spermatozoa are filiform shaped, which makes them more susceptible to injury from manipulation [Madeddu et al. 2009]. Additionally, they are highly sensitive to the changes in osmolarity that occur during the freezing/thawing process [Long et al. 2006; Blesbois et al. 2012].

Large numbers of peregrine falcons (Falco peregrinus) are managed in commercial breeding programs and could be used as a model for other birds of prey, especially ones that have spermatozoa with similar characteristics. By studying cryopreservation in falcons, viable solutions can be applied not only to the growing market of falconry, but also to a variety of other birds of prey, including wild endangered ones [Bailey et al. 2017, Al-Daraji et al. 2016].

The objective of this study was to evaluate the effect of different conditions during falcon semen cryopreservation on several sperm characteristics. For this purpose, the freezing protocol (slow freezing in straws vs. fast freezing in pellets), the thawing procedure (37 °C for 30 s vs. 5 °C for 1 min) and the type (DMA vs. DMSO) and concentration of cryoprotectant (3% vs. 8% DMSO) utilized were examined. The ultimate goal was to develop and optimize sperm cryopreservation protocols for this species and to increase the success rate of artificial inseminations with frozen semen.

However, no significant differences were detected for the above-mentioned parameters when sperm samples were thawed at 37 °C for 30 s or 5 °C for 1 min (Figure 2). 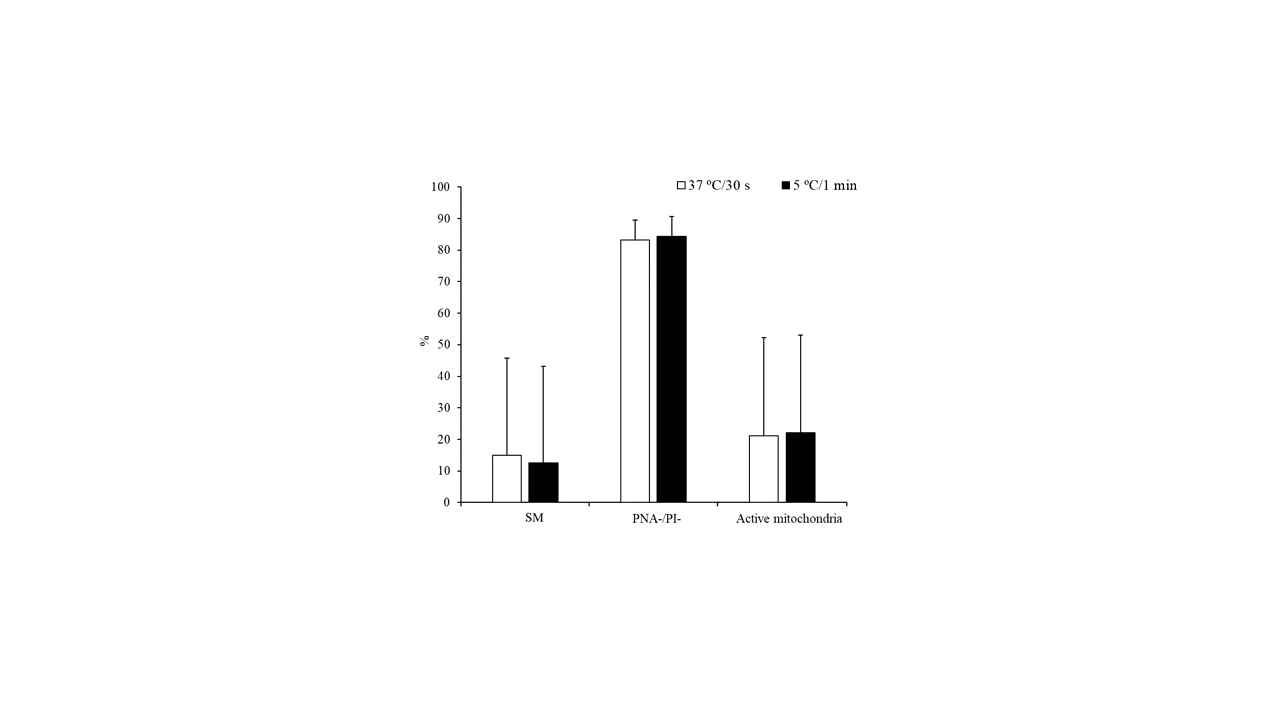 The data on the effect of the type of cryoprotectant (3% DMA or 8% DMSO) on the motility, viability, and DNA fragmentation of peregrine falcon spermatozoa are presented in Table 1 and Figure 3. Ejaculates that were frozen in 8% DMSO had greater values for all motility variables compared with those in 3% DMA (Table 1). Nevertheless, there were no differences (p < 0.05) in the percentage of viable cells and spermatozoa with fragmented DNA between samples frozen with 3% DMA and those frozen in 8% DMSO (Figure 3).

Table 1. Effect of type of cryoprotectant on motility parameters of peregrine falcon spermatozoa. 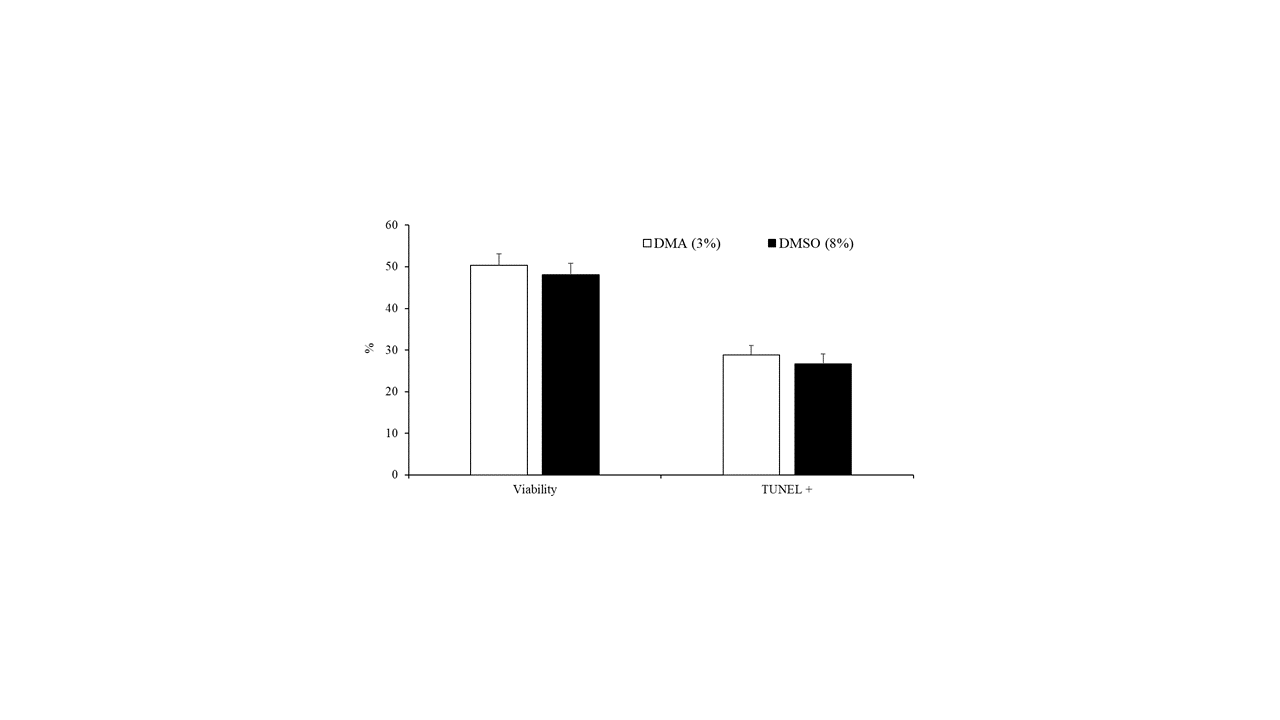 Figure 3. Sperm viability and spermatozoa with DNA fragmentation detected by TUNEL assay of samples cryopreserved in DMA (3%) or DMSO (8%). Results are expressed as the mean ± S.E.M.

The concentration of DMSO (4% vs. 8%) did not affect sperm motility parameters (Table 2) or the percentage of viable cells and spermatozoa with fragmented DNA (Figure 4).

Table 2. Effect of DMSO concentration (4% vs. 8%) on sperm motility variables. 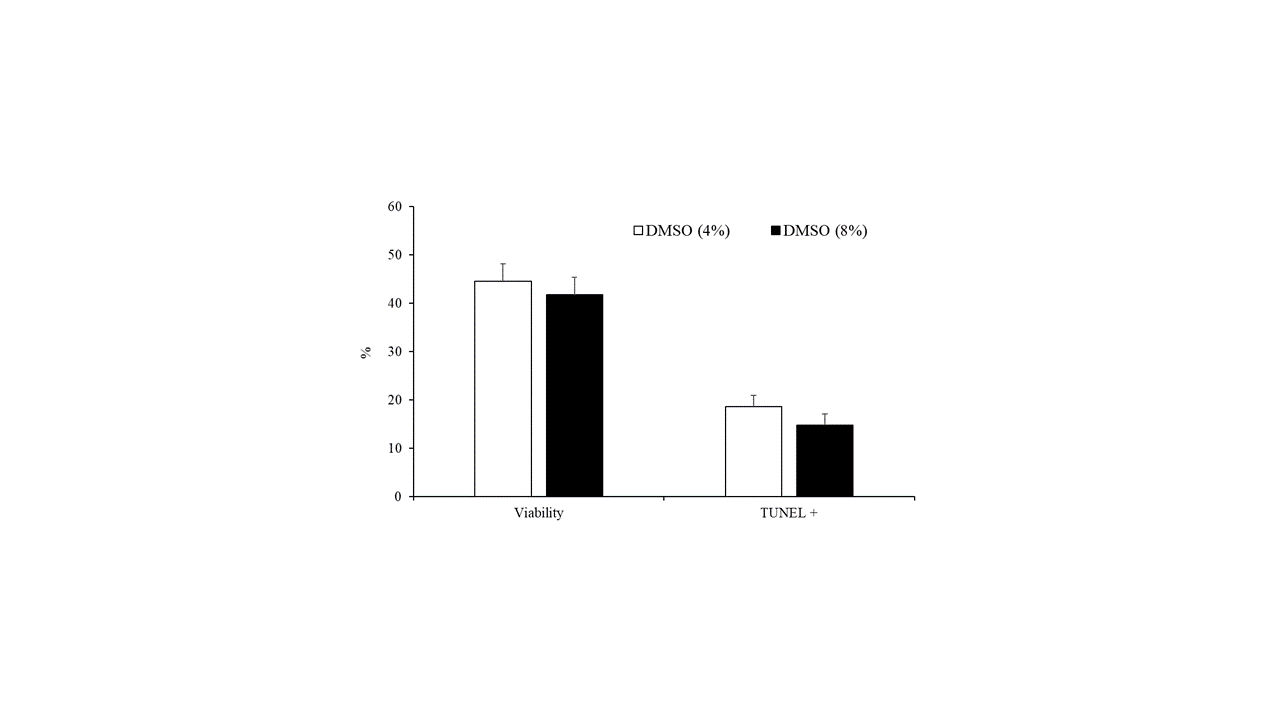 Figure 4. Sperm viability and spermatozoa with DNA fragmentation detected by TUNEL assay of samples cryopreserved with different concentrations of DMSO (4% or 8%). Results are expressed as the mean ± S.E.M.

In summary, the freezing method and type of cryoprotectant utilized were identified as critical steps in the process of peregrine falcon sperm cryopreservation. The cryopreservation of peregrine falcon sperm by slow freezing in straws in combination with DMSO resulted in higher motility rates, although the thawing procedure and DMSO concentration had no effect on sperm quality. In addition, the results suggest that DMA is not ideal when slow cooling rates are used. Further artificial insemination studies are required to determine whether fertility rates are greater using slow sperm-freezing methods.[1][2][3][4][5][6][7][8][9][10][11][12][13]

More
© Text is available under the terms and conditions of the Creative Commons Attribution (CC BY) license; additional terms may apply. By using this site, you agree to the Terms and Conditions and Privacy Policy.
Upload a video for this entry
Information
Subjects: Zoology
Contributor MDPI registered users' name will be linked to their SciProfiles pages. To register with us, please refer to https://encyclopedia.pub/register :
Ana Soler Valls
View Times: 215
Revisions: 2 times (View History)
Update Time: 30 Oct 2020
Table of Contents
1000/1000
Hot Most Recent