Submitted Successfully!
Thank you for your contribution! You can also upload a video entry related to this topic through the link below:
https://encyclopedia.pub/user/video_add?id=8476
Check Note
2000/2000
GnRH
Edit
Upload a video
This entry is adapted from 10.3390/cells10020437

GnRH receptors are expressed in other reproductive organs, such as the ovary and in tumors originating from the ovary. In ovarian cancer, GnRH is involved in the regulation of proliferation and metastasis. The effects on ovarian tumors can be indirect or direct. GnRH acts indirectly via the HPG axis and directly via GnRH receptors on the surface of ovarian cancer cells.

Ovarian cancer is a hormone-dependent disease that is influenced by hormonal signaling pathways [1][2]. This effect asserts itself after the illness and could therefore also have therapeutic potential. Gonadotropin-releasing hormone (GnRH) is pulsatile released from neurons in the hypothalamus and induces expression and pulsatile release of follicle-stimulating hormone (FSH) and luteinizing hormone (LH) from anterior pituitary. Both, FSH and LH in turn promote maturation of follicles, ovulation, corpus luteum formation and synthesis of estrogen and progesterone. In the following, we give an overview on the role of GnRH, the key player in the regulation of ovarian function, in ovarian cancer development and progression.

Time- and dose-dependent anti-proliferative actions of GnRH agonists have been observed in many cell lines from different cancer entities of the reproductive tract. This includes ovarian cancer [3][4][5][6][7]. GnRH antagonists also show significant growth-inhibiting actions on most GnRH receptor-positive cancer cell lines [3][4]. This indicates that GnRH agonists and antagonists may not be differentiated in the GnRH system in cancer cells. In addition, the signaling mechanisms of the GnRH receptor known to be activated in gonadotropic cells of the pituitary, are not connected in the transmission of the proliferation inhibiting actions of GnRH analogs in cancer cells. In pituitary gonadotrophs, specific binding of GnRH to its receptor leads to a conformational change and subsequent activation of the heterotrimeric G-protein subunit αq/11, which leads to calcium-dependent signal transduction [8][9]. Activation of phospholipase C (PLC) causes the hydrolysis of phosphatidylinositol-4,5-bisphosphate (PIP2). This creates diacylglycerol (DAG) and inositol-1,4,5-trisphosphate (IP3) [10][11][12]. IP3 diffuses from the plasma membrane and activates receptors on the endoplasmic reticulum (ER). This leads to an outflow of calcium from the ER into the cytosol [13][14]. DAG remains in the membrane and induces Ca2+-dependent protein kinase C (PKC), which in the course of the induction of mitogen-activated protein kinases (MAPK) [15][16] leads to gondotropin synthesis (LH and FSH) and secretion [15][17][18][19]. The signaling found to be activated by GnRH agonists in the pituitary is not turned on in cancers of the ovary, although PLC, PKC and AC can be activated in these cells by pharmacologic stimulation. [5][20].

In contrast to the pituitary gland, the GnRH receptor-mediated signal transduction in gynecological tumors takes place via coupling with G-protein αi instead of G-protein αq, which may result in variable receptor conformations and signaling complexes [20][21][22] (Figure 1). Since the gene sequence of GnRH receptors in human carcinomas of the ovary is the same as that in the pituitary gland, different receptor conformations may explain why GnRH receptors in ovarian cancer show different mechanisms compared with cells derived from the pituitary. After binding to G-protein αi, the activated GnRH receptor induces a phosphotyrosine phosphatase (PTP) and prevents the signaling of growth factor receptors, which leads to a reduction in proliferation of cancer cells [5][20][23][24][25][26]. Growth factor-driven mitogenic signal transduction is prevented which leads to downregulation of growth factor-mediated activation of mitogen-activated protein kinase (MAPK) [5], c-fos expression [27], and growth factor-induced proliferation [28]. These findings are in agreement with other research on GnRH analogs showing reduction of growth factor receptor expression [29][30][31] and/or growth factor-induced tyrosine kinase activity [5][23][24][26][30][32][33][34]. Induction of apoptosis does not appear to be involved in the down-regulation of cancer cell proliferation by GnRH agonists [3]. In contrast, Imai et al. have reported, that GnRH agonist leuprorelin stimulated intratumoral expression of apoptosis-inducing Fas ligand in GnRH receptor-positive tumor cells. At a concentration of 10 µM, leuprorelin induced up to a 90% reduction in cell number preceded by Fas ligand production [35][36][37][38]. However, GnRH agonist triptorelin did not induce apoptosis. On the contrary, by activating NFκB, triptorelin even seems to protect against apoptosis [39][40]. 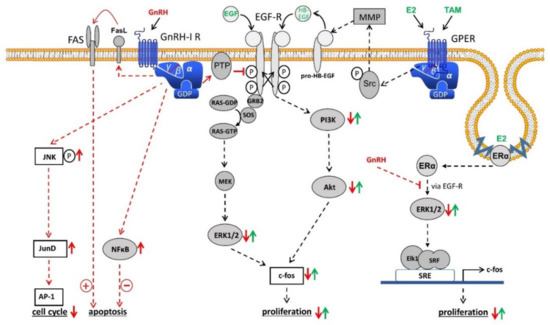 Since the JNK/c-jun signal transduction is activated by antiproliferative GnRH agonists and since JNK/c-jun is integrated into the reduction of cell growth in different systems, it seems plausible that the JNK/c-jun signal transduction participates in the inhibiting effects of GnRH agonists. GnRH agonists have also been shown to induce the binding of JunD to DNA, resulting in a reduction of cell growth, as evidenced by an increased G0/1 phase of the cell cycle and reduced synthesis of DNA [42].

Expression of the immediate-early response gene c-fos is induced by 17β-estradiol (E2) in estrogen receptor α (ERα)-positive ovarian cancer cell lines [43][44][45][46][47][48][49][50]. Via MAPK-dependent phosphorylation of Elk-1 the serum response element (SRE) is activated [51][52]. Since GnRH agonists inhibit EGF-induced cell proliferation and expression of c-fos through Ras/MAPK, it was interesting to know whether activation of SRE and expression of c-fos induced by E2 in ERα-positive cancer cells is also influenced by GnRH agonists and whether GnRH inhibits E2-driven cell proliferation [3]. Resting ERα-positive/ERβ-positive cancer cell lines were stimulated to proliferate by treatment with E2. Simultaneous treatment with GnRH agonists prevented this effect in a time- and dose-dependent manner [53]. ERα-negative/ERβ-positive cell lines were not affected by treatment with E2. Furthermore, E2 activates serum response element (SRE) and expression of c-fos in ERα-positive / ERβ-positive cell lines. This was inhibited by GnRH agonists [53]. GnRH agonists had no influence on the activation of estrogen response element (ERE) caused by E2. Transcriptional activation of SRE by ERα is due to activation of the mitogen-activated protein kinase (MAPK) pathway. GnRH inhibits this signal transduction, resulting in a decrease in E2-induced SRE activation followed by a decrease in E2-mediated c-fos expression. This is causative for a reduction in E2-induced cell growth [53].

Activation of PTP by GnRH also inhibits Src/MMP/HB-EGF signaling via the G-protein βγ subunit of G-protein coupled estrogen receptor 1 (GPER1), a membrane-bound estrogen receptor [54][55][56][57]. Due to the inhibition of GPER signaling, cancer cell proliferation by E2 in breast cancer cells without expression of ERα was inhibited [54][55][56]. In human breast cancer cells, GnRH analogs counteract EGF-dependent proliferation. GnRH analogs likely disrupt the change in growth regulation from estrogen dependency to EGF dependence that occurs after the acquisition of secondary resistance against 4OH-tamoxifen. This disruption of EGF receptor signal transduction re-sensitized the resistant cell lines for a therapeutical use of 4OH-Tamoxifen [58]. Especially in breast cancer, GnRH is not only involved in cancer cell proliferation. In metastatic breast cancer cells, GnRH inhibits cell invasiveness in vitro and metastasis in vivo [59][60][61][62][63]. In addition, it was shown that GnRH is involved in epithelial to mesenchymal transition (EMT) [63]. However, these effects of GnRH still have to be researched in ovarian cancer in the future.

More
© Text is available under the terms and conditions of the Creative Commons Attribution (CC BY) license; additional terms may apply. By using this site, you agree to the Terms and Conditions and Privacy Policy.
Upload a video for this entry
Information
Subjects: Obstetrics & Gynaecology
Contributor MDPI registered users' name will be linked to their SciProfiles pages. To register with us, please refer to https://encyclopedia.pub/register :
Günter Emons
View Times: 210
Revisions: 2 times (View History)
Update Time: 07 Apr 2021
Table of Contents
1000/1000
Hot Most Recent