Submitted Successfully!
Thank you for your contribution! You can also upload a video entry related to this topic through the link below:
https://encyclopedia.pub/user/video_add?id=8266
Check Note
2000/2000
Hoveyda–Grubbs Catalyst
Edit
Upload a video
This entry is adapted from 10.3390/catal11030359

Hoveyda–Grubbs-type complexes, ruthenium catalysts for olefin metathesis, have gained increased interest as a research target in the interdisciplinary research fields of chemistry and biology because of their high functional group selectivity in olefin metathesis reactions and stabilities in aqueous media.

Transition metal-catalyzed olefin metathesis (OM), the rearrangement of C–C double bonds, has gained its importance in organic synthesis because a variety of OM reaction fashions (shown in Scheme 1) are applicable for the syntheses of natural products and bioactive compounds [1][2][3]. Among transition metal catalysts used for OM reactions, a series of Grubbs catalyst and its derivatives (1–5; shown in Figure 1), catalysts with a ruthenium center, are the most popular catalysts both in industrial and laboratory-scale reactions [4]. This is because these catalysts are properly stable under the air compared to other transition metal complexes for OM reactions, such as Schrock-type complexes with a molybdenum center. The usability of these catalysts has motivated researchers to develop more diverted ruthenium catalysts equipped with various substituent groups. Especially, Hoveyda–Grubbs second-generation catalyst (HG-II, 5) shows the stability to some extent even in protic media, resulting from the strong coordination of an N-heterocyclic carbene (NHC) ligand and the bidentate coordination fashion of a 2-alkoxybenzylidene ligand (so-called Hoveyda-type ligand) [5]. Furthermore, HG-II is applicable for all types of OM reaction shown in Scheme 1. Consequently, HG-II has been a target of structural modification to develop a variety of derivatives with controlled reactivities [6][7][8][9][10][11]. 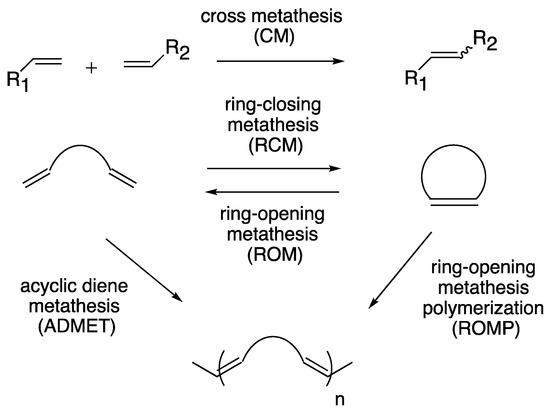 Figure 1. Grubbs catalyst and its derivatives 1–5.

Another advantage of ruthenium catalysts, other than the tolerance to moisture and air, is that the ruthenium centers in these catalysts have the higher affinity towards olefin than amide, ester, and carboxy groups (i.e., functional groups seen in biomolecules) [12]. Inspired by this fact, researchers have attempted to apply structurally modified HG-II-type complexes for biochemical demands (e.g., the construction of enzymatic olefin metathesis process, the regulation of bioreactions, and so on). This is an example for the marriage between organometallic chemistry and biological chemistry [13].

The research field on organic syntheses using enzymes has a long history, which have been summarized in many review article and books including special issues in journals [14]. Most past works on enzymatic syntheses have mainly focused on the reaction types that are often seen in metabolism (e.g., oxidation, reduction, and hydrolysis). In contrast, artificial metalloenzymes (ArMs; ArM = artificial metalloenzyme), synthetically constructed enzymes with a metal complex embedded in protein scaffolds, have the potential to mediate abiological types of reaction, with the design of metal complexes inserted into the protein core. In this context, ArMs with OM activity (OM-ArMs) are attractive because no enzymes in nature mediate olefin metathesis: The scientific importance of ArMs with olefin metathesis activity can be seen in the fact that several review articles have taken up this topic [15][16][17][18][19][20][21][22][23][24]. Accordingly, this chapter, firstly, introduces the general concept for the construction of ArMs with olefin metathesis activity. Next, as one example, we introduce our work on the ArM with the scaffold of α-chymotrypsin (α-CT), a commercially available protease [25]. Furthermore, recent achievements in the application of OM-ArMs for in-cell systems will also be presented.

2.1. Choice of Host Proteins and Design of Hoveyda–Grubbs-Type Complexes

Figure 3. Strategies for the construction of artificial metalloenzymes with olefin metathesis activity (OM-ArMs) [17].

Protein scaffolds in ArMs provide a hydrophobic environment in the vicinity of the metal complex site. As the guideline for the choice of the protein scaffolds in the construction of ArMs, several structural demands should be considered:

Table 1 lists the research examples of hybrid OM-ArMs. For example, the heat shock protein from Methanocaldcoccus jannaschii (MjHSP) forms a 24-subunit spherical capsid with large pores. The structure provides sufficient space for a metal complex site [26]. (Strept)avidin also has a glove-like wide space near the protein surface [27]. Proteins are structurally robust and tolerant to acidic conditions. FhuAΔCVFTEV and nitrobindin construct a metal complex space in the inside of their β-barrel and cylinder-type structures [28][29]. α-CT, a protease recognizing a hydrophobic side chain of Phe, Tyr, and Trp, basically has a structural cleft for the accommodation of a peptide chain [30], which is used as a reaction space for OM reactions. 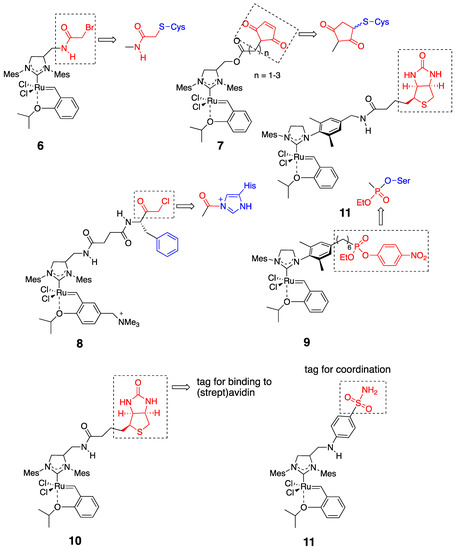 The combination of the two strategies (i.e., supramolecular anchoring followed by covalent conjugation) is also useful to situate a HG-II-type complex near a specific amino acid residue. For example, complex 8, a complex used for the α-CT-based OM-ArM has a phenylalanine moiety at the terminal of the complex, where α-CT accommodates the hydrophobic side-chain of the phenylalanine part at the S1-pocket at the protease active site (Figure 5) [30]. As a result, the chloromethyl ketone group is forced to position near His57 imidazole, followed by the regioselective conjugation at the place. His57 is located in the protease active site in α-CT. The blocking of His57 by complex 8 was confirmed by the abolishment of the intrinsic protease activity of α-CT.

In the characterization of OM-ArMs, one of the most important issues to be clarified is the location of the metal center in the protein structure. In the studies of the α-CT-based OM-ArM with complex 8, the appearance of induced circular dichroism (CD) signals around 370 nm, the region of metal-to-ligand charge transfer (MLCT) in HG-II-type complexes [33][34], was used as an indicator to confirm the local environment around the metal center. The CD signals were observed for the complex in α-CT, whereas no CD signal appeared without α-CT. The finding proved that complex 8 attached to α-CT has structural torsion around the metal coordination site, resulted from the positioning of the complex in the cleft part of α-CT (see Figure 5).

The protein scaffolds of OM-ArMs help to situate a HG-II-type complex under different environments from that in bulk, regulating the OM catalytic activities. For example, the OM-ArM in α-CT showed the higher ring-closing metathesis (RCM) activity toward a glucose-pendant substrate (a water-soluble and electrostatically neutral compound) compared to an ammonium compound or N-tosyldiallyamide although the substrate specificity was low without the protein (see Table 1). This is because the positively charged protein surface of α-CT (pI ~ 8.6) interfered the access of the positively charged or hydrophobic substrate to the metal center embedded in the protein core. As a result, the structural characteristic of α-CT (the surface charge) brought about the substrate specificity.

Furthermore, the structural optimization of reaction space in OM-ArMs have also been performed using genetic mutation. The mutation of (an) amino acid residue(s) near the metal center can change the shape of the reaction space to regulate the access of a substrate to the metal center. As an example, the OM-ArM constructed by the mutant nitrobindin (denoted as NB4; see Table 1) showed the activity of ring-opening metathesis polymerization (ROMP) for 7-oxonorbornene; however, the conversion was very low (10% conversion, turnover numeber (TON) = 1100). This is because the inserted ruthenium complex in the protein almost occupied a small cavity in the protein core (the estimated volume: 855 Å3 vs. 795 Å3 for 7 (n = 3)). Consequently, the access of a substrate molecule was limited. After inserting an additional β-strand part into the original protein structure to expand the narrow cavity (up to 1389 Å3), the conversion was successfully increased up to 75% (TON = 9300) [35]. As demonstrated in this work, genetic mutation around the reaction center is a useful strategy for modulating the substrate specificity and the stereoselectivity in substrate/product as well as the increase in turnover numbers of catalytic reactions. In this context, the concept of “directed molecular evolution” (i.e., repetition of mutation and screening to find the best class of ArMs) has been recognized as a general idea in the development of ArMs [36][37]. For the optimization of the catalytic activities of OM-ArMs, one example based on in-cell systems will be introduced in the next chapter.

To utilize the structural effects of a host protein on the catalytic activities of OM-ArMs, the metal center in an OM-ArM should be placed inside of the protein core but be situated around the entry of the core to achieve a smooth catalytic cycle (i.e., approach of a substrate molecule, chemical processes, and a fast release of a product). In this situation, the reactivities of OM-ArMs are partially influenced by components in reaction media (e.g., pH, buffer, additives, and so on). For example, the OM-ArM with α-CT exhibited the RCM activities in 100 mM KCl aq, whereas the addition of buffer reagent significantly decreased the catalytic activity. Several OM-ArMs showed the higher OM activities under weakly acidic conditions rather than neutral conditions in spite of no significant change in the whole structures of the host proteins. This fact is a generally considerable issue in the OM reactions in aqueous media. This topic will be discussed later.

More
© Text is available under the terms and conditions of the Creative Commons Attribution (CC BY) license; additional terms may apply. By using this site, you agree to the Terms and Conditions and Privacy Policy.
Upload a video for this entry
Information
Subjects: Biochemical Research Methods
Contributor MDPI registered users' name will be linked to their SciProfiles pages. To register with us, please refer to https://encyclopedia.pub/register :
Takashi Matsuo
View Times: 1606
Revisions: 2 times (View History)
Update Time: 26 Mar 2021
Table of Contents
1000/1000
Hot Most Recent