Submitted Successfully!
Thank you for your contribution! You can also upload a video entry related to this topic through the link below:
https://encyclopedia.pub/user/video_add?id=802
Check Note
2000/2000
COTS-Based Architectural Framework
Edit
Upload a video
This entry is adapted from 10.3390/app10093228

This research tackles issues such as the reliability and efficiency of real-time control systems based on commercial off-the-shelf (COTS) components. A strong emphasis is placed on finding novel efficient solutions based on standardized and commercially available off-the-shelf hardware/software components. In this direction, this research applies credible and feasible methodologies (e.g., model-based design, component-based design, formal verification, real-time scheduling, prototyping, and validation) in an innovative enhanced way. As an important outcome, a versatile integrative design approach and architectural framework (VIDAF) is proposed, which supports the development and implementation of reliable real-time control systems and applications using commercial off-the-shelf components. The feasibility and applicability of the proposed system’s architecture are evaluated and validated through a system application in embedded real-time control in manufacturing. The research outcomes are expected to have a positive impact on emerging areas such as the Industrial Internet of Things (IIoT).

The advances of computer technologies and the continuous growth of their applications bring new challenges (e.g., tasks concurrency in multicore processors) in building reliable real-time control systems. The complexity of such systems continues to increase, by integrating various computing and networking components and devices, particularly wireless communication equipment and other structures and services that rely on the physical world as well as on the virtual world e.g., cloud computing and the Internet-of-Things (IoT) [1][2]. The drastic increase in the versatility of computing devices and their deployment in key sectors, such as health-care, energy, and the military raises several issues regarding the reliability, availability, and adaptability of their operation. Many sectors rely on the reliable, on-schedule, and cost-efficient operation of such computer-based systems in order to provide appropriate and time effective services. Such essential aspects are a necessity for critical systems deployed in key sectors. In these environments, the architectural framework of such systems is based primarily on specialized or custom-built hardware/software (HW/SW) components, which impose extra undesirable costs, slow down the development and maintenance process, and limit the reusability and versatility of the final product or service [3].

The challenge of keeping the development and implementation of real-time control systems reliable and efficient, and at the same time, low-cost is getting harder. This is because system designers and developers are faced with the dependability, inflexibility, and often high-cost of the specialized hardware/software components [4][5]. In addition, building systems based on specialized hardware/software imposes extra costs which are not desirable. Developers would prefer to utilize primarily general-purpose, reconfigurable/reprogrammable hardware/software components, in order to lower the cost, speed up the development process, and make the final product more versatile. Such components are commercial off-the-shelf (COTS) items sold in substantial quantities in the commercial marketplace. For example, commercial off-the-shelf components have become the preferred way of designers in military and aerospace applications for the development of unmanned aerial vehicles [6][7].

The market of reliable real-time systems is rapidly expanding due to the increasing number of applications in several domains and sectors (e.g., health services, industrial robotics, unmanned aviation, smart cities, etc.). In such critical real-time systems, typically, the more severe the consequence of potential system failure, the more specialized the control system needs to be. Usually, such specialized solutions impose significant costs. The new market applications, particularly of reliable embedded systems in critical applications in IoT and cloud computing, are seeking to use low-cost COTS-based components and devices in building real-time control systems due to their immediate availability, rapid utilization, ease of reconfiguration, and versatility. Low-cost COTS components are expected also to affect the reliability of many systems, as reduced costs could improve the threshold for introducing reliable solutions in real-time systems too, for which reliability is not a strict prerequisite (e.g., in soft real-time systems). In this direction, several companies report the development of such systems based on COTS components. Just recently, companies such as Abaco Systems, Real-Time Innovations (RTI), and Wind River Co. announced the joint development of the first hardware, operating system, and communications framework with commercial-off-the-shelf (COTS) components for Airborne Systems [8]. Systems built on COTS-based components provide increased reliability and quality over custom-built components as these are utilized and validated by various independent developers and organizations, due to their large scale utilization in various applications and implementations. However, despite the continuous increase in the utilization of COTS-based components, their reliable performance in real-time systems still remains under further research, which is an objective of this work too.

An important motivation for this research into reliable real-time systems based on COTS components, particularly for control applications in manufacturing, is the continuous increase of the demand for rapid, low-cost, low-consumption, and short-time development. Additionally, there is also a need for the immediate availability of versatile and general-purpose hardware/software components (e.g., cloud computing is the on-demand availability of computer system resources). For this reason, a strong emphasis of this research is to find efficient solutions to relevant open questions and issues, regarding the reliability and efficiency of real-time control systems based on general-purpose hardware/software components, such as:

This research work proposes a versatile integrative design approach and architectural framework (VIDAF) that addresses these challenging issues and open questions, with credible methodologies and approaches that lead to novel efficient solutions, validated in real-world cases. The overall structure of the proposed framework is illustrated in Figure 1. 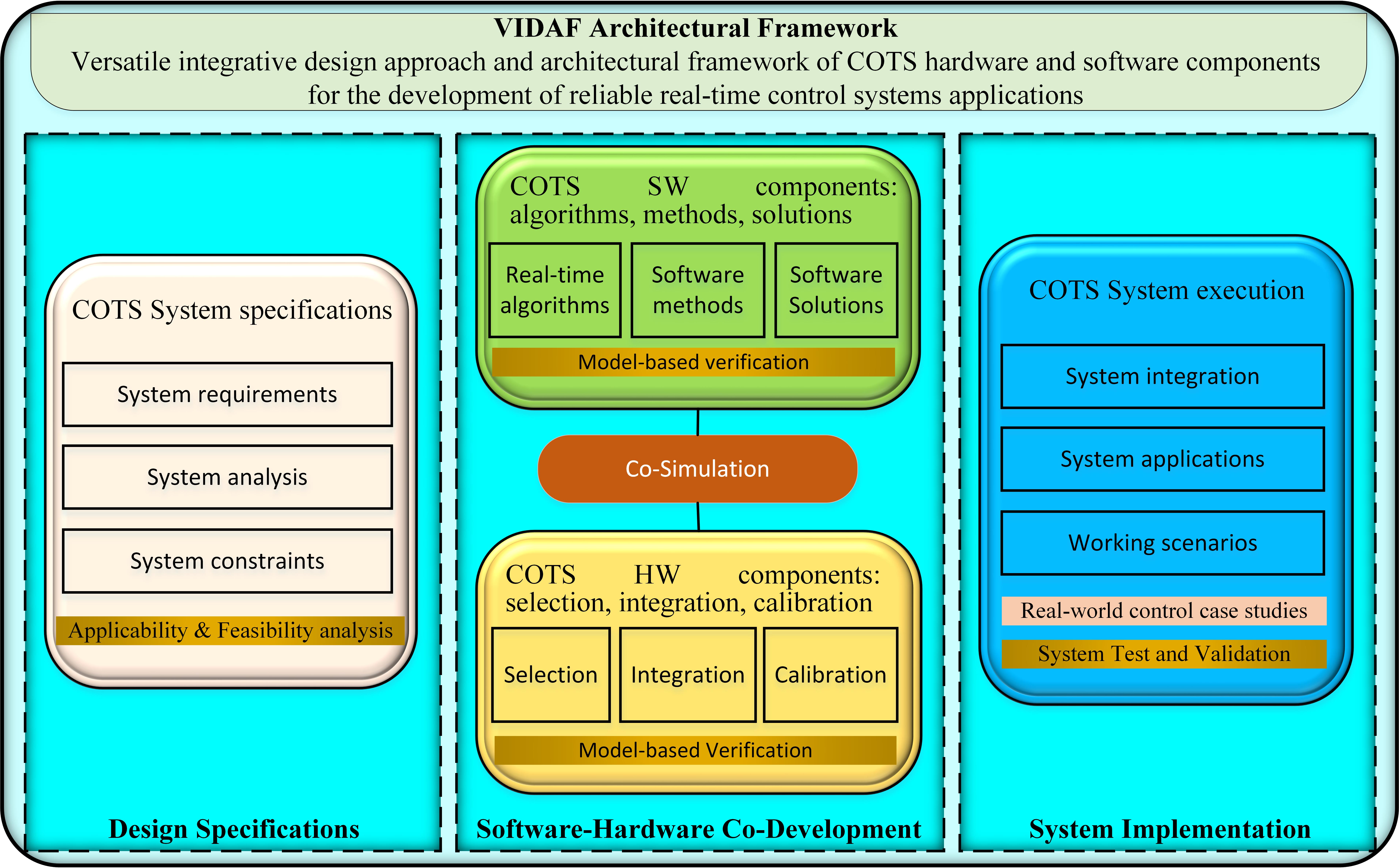 VIDAF defines an open architectural framework in building reliable, real-time, and cost-effective systems and applications, based on general-purpose hardware/software components, and minimizing the use of specialized ones. In resolving these challenges, the research targets the following objectives:

This research paper presents the approaches and methodology to achieve these objectives and goals in an innovative way, proposes an architectural framework that enables the development and implementation of reliable real-time control systems, and demonstrates its feasibility and applicability through a system application in manufacturing. A COTS-based development process is proposed, upon which a system architecture is implemented into the control of a lime mash/slurry (milk-of-lime) storage and delivery machine. In this case study, a custom-built (80C188EB-based and assembly driven) controller was substituted successfully with COTS-based hardware components (RaspberryPi-based microcontroller board, referred from now on as RPi3) and open-source control software modules (written in standard C and Python). The experimental results of the architectural working prototype provide evidence that the system performs reasonably well and correctly.

More
© Text is available under the terms and conditions of the Creative Commons Attribution (CC BY) license; additional terms may apply. By using this site, you agree to the Terms and Conditions and Privacy Policy.
Upload a video for this entry
Information
Subjects: Engineering, Industrial
Contributor MDPI registered users' name will be linked to their SciProfiles pages. To register with us, please refer to https://encyclopedia.pub/register :
George Adam
View Times: 1374
Revisions: 3 times (View History)
Update Time: 28 Oct 2020
Table of Contents
1000/1000
Hot Most Recent