+1 point
Thank you for your contribution! You can also upload a video entry related to this topic through the link below: https://encyclopedia.pub/user/video_add?id=7601
Check Note
2000/2000
Cardiac Development

Cardiac development is a complex developmental process that is initiated soon after gastrulation, as two sets of precardiac mesodermal precursors are symmetrically located and subsequently fused at the embryonic midline forming the cardiac straight tube. Thereafter, the cardiac straight tube invariably bends to the right, configuring the first sign of morphological left–right asymmetry and soon thereafter the atrial and ventricular chambers are formed, expanded and progressively septated. As a consequence of all these morphogenetic processes, the fetal heart acquired a four-chambered structure having distinct inlet and outlet connections and a specialized conduction system capable of directing the electrical impulse within the fully formed heart.

2. From Gastrulation to the Early Cardiac Linear Tube

Cardiac development is complex developmental process that is initiated soon after gastrulation. Soon thereafter the epiblast starts delaminating and migrating towards the future mesodermal layer, and cardiac precursors can be traced in the primitive streak (Figure 1A). At this stage, mesoderm precursors are characterized by the expression of Brachyury [1], Mesp1 and Mesp2 [2][3][4], having all of them an important contribution to early cardiogenic development [5][6][7][8][9]. Following the first configuration of the mesodermal layer, cardiac precursors migrate anteriorly and they start expressing early cardiogenic transcription factors. At this stage, several members of the Forkhead, Nkx, Gata, and Mef2 families, respectively, are expressed in the precardiac mesoderm [10][11][12][13] in a wide range of different species such as Xenopus [14], zebrafish [15][16][17], chicken [18][19][20][21][22], and mice [23][24][25][26][27][28][29][30], being particularly important Nkx2.5 [31][32][33][34], Gata4 [35][36][37][38], and Mef2c [39][40][41][42][43] for early cardiogenesis in different experimental models. Expression of these cardiogenic markers is regulated by signaling factors from the adjacent tissues such as Bmp2 [44][45][46][47][48][49], Fgf8 [50][51][52][53] and Wnt signaling ][54][55][56][57][58][59][60]. Importantly, Bmp2 and Fgf8 signaling is controlled by an intricated molecular cascade in which non-coding RNAs, such as miR-130 and miR-133, are also involved [61]. As development proceed, the initial cardiogenic precursors become configured into a horseshoe shape (Figure 1B) and subsequently the bilateral cardiogenic precursors are fused in the embryonic midline generating a cardiac straight tube [62]. At this stage, the embryonic heart is configured by two distinct epithelial layers, an externally located myocardial layer and an internally located endocardial layer. The two distinct cardiogenic subpopulations can be already recognized at this stage [63][64], the first heart field (FHF) that contributes to the early cardiac straight tube, and the second heart field (SHF) that is medially located and will subsequently contribute to both the arterial and venous poles of the heart [65][66][67] (Figure 1C). FHF specification is dependent of cardiogenic factors such as Nkx2.5 [68], while SHF specification is mostly determined by islet-1 [69] while Bmp signaling contributes to SHF proliferation [70]. On the other hand, Mef2c is required for both FHF and SHF development [71]. 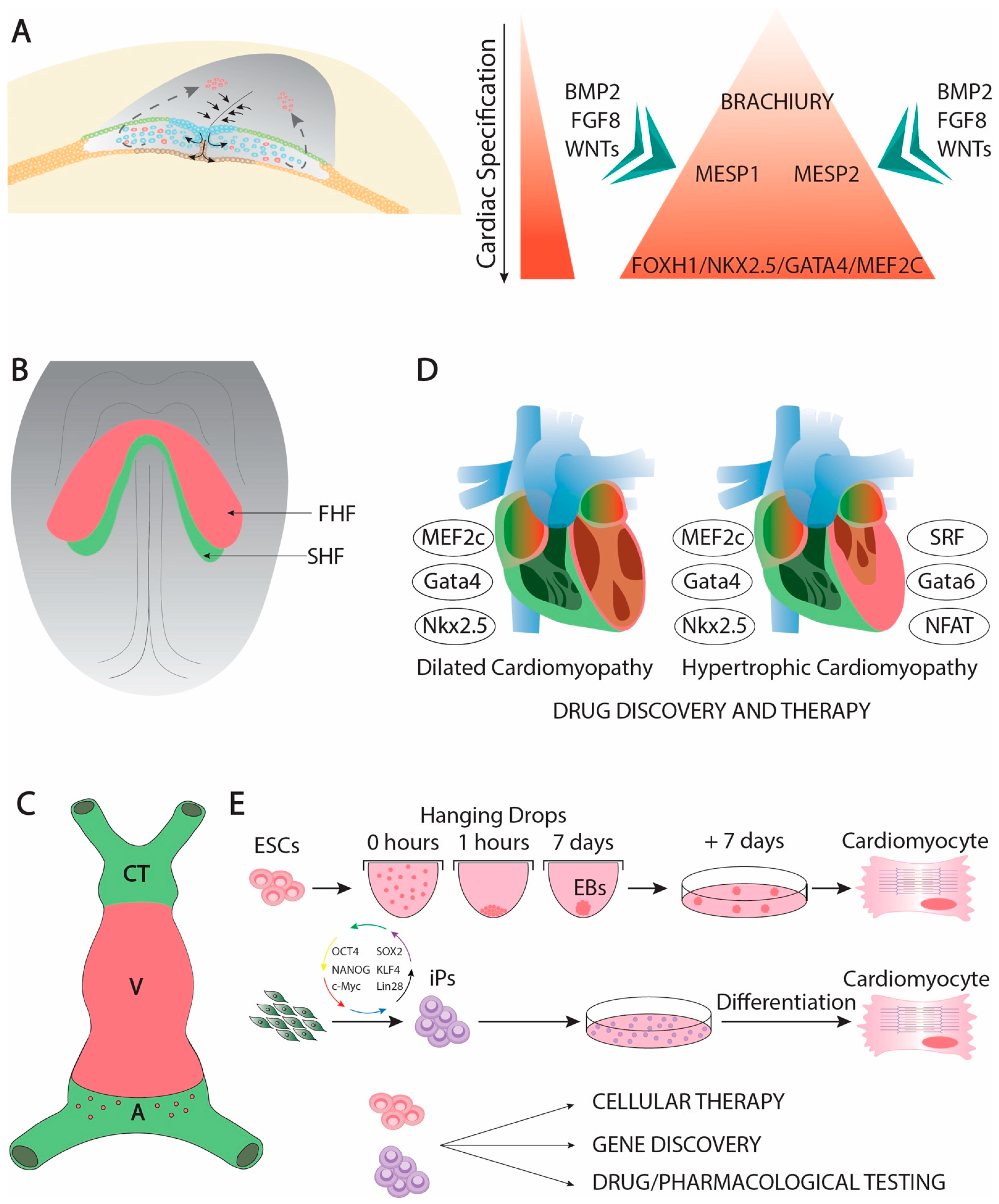 Figure 1. Early steps of cardiogenesis. Schematic representation of the early steps of cardiac development, initiated at the primitive streak stage with the formation of the cardiogenic precursors (panel A) that soon migrate anteriorly and constitute a horse-shoe cardiac crescent (panel B), and, subsequently, the cardiac straight tube (panel C). Contribution of the FHF and SHF can already be identified at the cardiac crescent stage (panel B). During these morphogenetic events, cardiac specification and determination takes place with the contribution of distinct growth factors and transcription factors, as exemplified in panel A. Impaired expression of these factors is observed in adult cardiac pathologies such as dilated cardiomyopathy or hypertrophic cardiomyopathy (panel D) providing target genes for drug discovery and therapy of these physiopathological conditions [72][73][74][75][76][77]. Manipulation and implementation of sequential protocols of these growth factors played an important role for directing embryonic stem cells (ESCs) and induced pluripotent stem cells (iPS) cell determination into the cardiomyogenic lineage and thus providing tools for cellular therapy, novel gene discoveries and drug/pharmacological treatments (panel E) [78][79][80][81][82][83][84][85][86][87][88][89][90][91][92][93].

These transcriptional networks have been studied in detail over the last decades, uncovering a multiple of downstream genes [115][116][117][118][119][120][121][122], including non-coding RNAs, such as miR-99/let-7 [123][124], that are involved in multiple steps of cardiac development as reported in different species. Overall, these data demonstrate that early cardiac development is an intricated morphogenetic mechanisms in which multiple factors are critically involved (Table 1).

Over the last decades, our understanding of the cellular and molecular processes involved in cardiac morphogenesis has greatly increased. A large number of studied in different species have identified several growth factors and transcription factors with pivotal roles in the cardiogenic lineage commitment. Importantly, several of these factors contribute to multiple facets of cardiac development beyond just the early stages, such as for example chamber formation and valvulogenesis as reported for Nxk2.5 and Gata4 ([11][12][13]), respectively. Furthermore, the functional roles of these early cardiogenic lineage transcription factors are also associated to adult cardiac structural pathologies, such as dilated cardiomyopathy [221][222][223][224][225][226][227] or bicuspid aortic valves [228][229] and electrophysiological pathologies such as atrial fibrillation [230][231][232][233]. Manipulation of these core transcription factors have provided new tools to convert differentiated cells such as fibroblasts into cardiomyocytes [91], opening new therapeutic opportunities to heal the damaged heart. Importantly, a novel layer of gene regulation is emerging with the identification and functional characterization of non-coding RNAs that are important for cardiomyogenic commitment [234][235][236], broadening thus the therapeutic tools to provide novel approaches for cardiac repair.

The embryonic heart is the first organ to display morphological left–right asymmetry. Impairment of sidedness leads to severe body plan abnormalities, including herein cardiac defects. Our knowledge of the molecular and cellular bases of left-right symmetry break has considerably increased over the last decade, providing novel links between early molecular events and impaired sidedness . Such discoveries have served to unravel the genetic bases of heterotaxia and thus as guiding tools for genetic screening and counseling in these human conditions. The discovery of non-coding RNAs involved in early cardiac looping events also exemplify that the final picture of left–right signaling is still incomplete and it would anticipate novel discoveries in the front in the near future.

As cardiac looping takes place, the heart is progressively externally covered by the embryonic epicardium. Importantly, such embryonic epicardium will migrate and deepen into the embryonic myocardium leading to the formation of the cardiac fibroskeleton and part of the coronary vasculature . Failure on the formation of the embryonic epicardium or its progenitor cells in the proepicardium is incompatible with life since the ventricular walls are thinner and the coronary vasculature failed to properly form . Curiously, neither the proepicardium or the epicardium leads to significant contribution to the embryonic myocardium in vivo, but if isolated and cultured in vitro, they can do so . Such properties can be used to unlock the cardiomyogenic potential of the epicardium and thus to sever as a source of myocardial differentiation to heal the heart, as previously reported . Unlocking these events with non-coding RNAs have been recently reported , opening new strategies to heal the damaged heart.

The formation of the cardiac chambers and the cardiac conduction system is an intricated developmental process that is initiated right after left–right symmetry break and thus cardiac looping. Subsequently, the heart displays a complex septation process that provide morphogenetic cues to form a four-chambered organ with distinct inlet and outlet connections. A multitude of different growth factors such as Bmp, Fgf and Wnt family members, and of transcription factors participate on this cardiac developmental orchestra [44][45][46][47][48][49][50][51][52][53][54][55][56][57][58][59][60], and similarly as in the earlier events of heart formation, non–coding RNAs, including herein microRNAs and lncRNAs also participate [61][234][235][236], although our understanding of their functional role is still scarce. Deciphering the molecular cascades involved in these developmental processes have provided candidate genes to test and identify genetic culprits of congenital cardiac anomalies in humans, and thus to design strategies for genetic screening and counseling.

More
© Text is available under the terms and conditions of the Creative Commons Attribution (CC BY) license; additional terms may apply. By using this site, you agree to the Terms and Conditions and Privacy Policy.
Upload a video for this entry
Information
Subjects: Anatomy & Morphology
Contributor MDPI registered users' name will be linked to their SciProfiles pages. To register with us, please refer to https://encyclopedia.pub/register :
Diego Franco
View Times: 177
Revisions: 2 times (View History)
Update Time: 26 Feb 2021
Table of Contents
1000/1000
Hot Most Recent