Submitted Successfully!
Thank you for your contribution! You can also upload a video entry related to this topic through the link below:
https://encyclopedia.pub/user/video_add?id=7276
Check Note
2000/2000
Platelet Concentrates
Edit

1. Overview of Lyophilization for Platelet Concentrates

Lyophilization, or freeze-drying, has been developed as a method for transforming solutions containing labile substances into more stable solids to enable their distribution as well as preserving bioactivity for different applications. This process is widely used to enhance the stability and long-term storage of proteins in the pharmaceutical, biotechnology and food industries[16]. Indeed, freeze-drying offers storage and processing benefits over conventional methods, including (1) longer storage times at room temperature; (2) rapid transformation by rehydration, which enables practical application in emergency medicine; and (3) increased stability to enable transport and application at distant sites[21][22].

The idea of platelet lyophilization was originally proposed by Wolkers[23], who initially indicated that freeze-dried platelets functioned biologically similarly to endogenous platelets. Indeed, these lyophilized platelets not only exhibit increased storage stability but are also able to rapidly release bioactive growth factors, such as platelet-derived growth factor-BB (PDGF-BB), TGF-β1, and VEGF at the surgical site[24][25][26]. It does not have a detrimental effect on PCs’ ability to facilitate tissue regeneration, suggesting that a range of cytokines and fibrin networks in the PCs are preserved and have the capacity to promote chemotaxis and cell proliferation[27]. LPCs express their growth factors more slowly than PCs. This was discovered in a study by Zheng[13] when they attempted to combine nano-hydroxyapatite (nHA), L-lactic acid-co-glycolic acid (PLGA), and the hydrogel (nHA/PLGA/Gel) scaffold with LPCs. The in vitro release experiments showed that the composite scaffold allowed for gradual and continuous release of PRF-derived growth factors. They examine the pattern of growth factors released from the composite scaffolds over 12 weeks and illustrated that the concentration of IGF-I, TGF-β1, and PDGF-AB in the four weeks reached 66%, 67%, and 65%, respectively. It was demonstrated that there was a higher release rate in the first 4 weeks followed by a relatively steady rate over the following weeks. Figure 1 provides a schematic diagram of the method used for producing lyophilized PCs, and Figure 2 provides a physical comparison of PCs and lyophilized PCs. 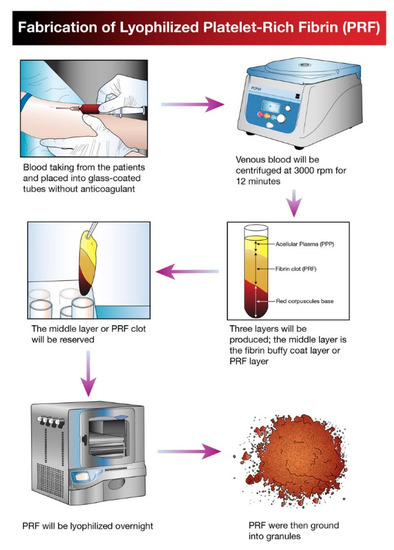 Figure 1. Schematic diagram illustrating the processing and development of lyophilized platelet concentrate (LPC) in the form of platelet-rich fibrin (PRF).

The use of PCs to deliver growth factors to defective areas to stimulate tissue regeneration in both the medical and dental fields has gained considerable interest over recent years. However, despite the considerable advantages offered by LPCs, only a limited number of studies, summarized below, have been reported. This review reports on the current application and potential of LPCs in craniofacial tissue regeneration. Table 1 provides details of studies reporting the different preparation methods of LPCs for potential use as craniofacial scaffolds for tissue regeneration.

Despite its excellent safety and efficacy, PCs suffer from several significant disadvantages that limit their broader clinical applications. Current drawbacks include the processing requiring open membrane handling and a reduced elastic modulus that does not support suturing. Recent research has attempted to address these issues. One recent analysis compared the biological and mechanical properties of fresh, frozen, and lyophilized PC membranes produced by the traditional bottle-tube approach and those produced in a singular-syringe closed system. The data demonstrated that a relatively small number of mesenchymal stem cells could attach to fresh PC membranes compared with those that were frozen or lyophilized[32]. Furthermore, frozen and lyophilized PCs exhibited a more compact structure with an uneven texture compared with fresh PCs, and this may explain the differences observed in the properties of the tensile strength reported[32]. In 2017, Nakatani[24] performed a bone engineering study on mice calvarias using an LPC product. The researchers showed preservation of biological properties of LPCs even after exposure to lyophilization, as they observed that the sum of PDGF-BB and TGF-B1 was maintained by lyophilization. They concluded that the LPC can increase cranial bone regeneration similar to the process observed in traditionally prepared PCs. They postulated that the biological function of growth factor during the bone healing period was preserved.

Periodontitis is an important disease in dentistry that can result in both hard and soft tissue loss. Periodontal regeneration and healing can be enhanced by utilizing growth factors that modulate cellular responses, and, therefore, LPCs have been incorporated into chitosan hydrogel scaffolds containing encapsulated periodontal ligament stem cells (PDLSCs)[28]. PDLSC proliferation and migration rate increased dramatically with LPC inclusion as compared with fresh PC-containing hydrogel controls. This outcome was reportedly potentially due to both the increased pore diameter in the LPC containing scaffolds as well as enhanced growth factor release[17].

For several decades, barrier membranes have been used in oral and maxillofacial surgery. The most popular materials for the manufacture of these membranes are collagen, fresh PCs, and chitosan compounds. Recently, Ansarizadeh[29] reported the integration of chitosan and LPCs into a composite collagen membrane, and the results revealed that both the chitosan/collagen weight percentage and the concentration of LPCs enhanced mechanical strength and membrane biodegradability. Furthermore, increased cell proliferation, higher cell viability, and osteogenic differentiation were enabled by the incorporation of LPCs.

LPCs have also been assessed clinically to determine their applicability as a scaffolding material for other craniofacial tissue regeneration applications[27]. The data demonstrated that constructs exhibited a consistent fibrin structure with a significant leukocyte infiltrate. Transmission electron microscopy (TEM) studies verified the preservation of their potency in promoting tissue healing, even at 1-week following lyophilization at −196 °C. For the assessment of general healing at the surgical site, color, swelling, bleeding, and post-operative pain were assessed to determine the effect of the LPCs. No apparent differences were identified compared with the control group, which was composed of freshly isolated PCs[27]. Consequently, the authors concluded that the LPC constructs promoted bone regeneration and that they also promoted chemotaxis and proliferation of neighboring osteoblast progenitors similarly to the fresh PC isolate control.

Thus far, there have been only a relatively small number of studies analyzing the effects of PCs for pulp regenerative therapies. Two recent reports have, however, aimed at determining the potential application of LPCs in regenerative endodontic procedures[33][34]. The authors reported that the lyophilization approach still enabled comprehensive local release of cytokines. Xu[34], conducting a study on beagle dogs, showed that LPC application was capable of inhibiting the release of pro-inflammatory cytokines while promoting proliferation, migration, and odonto-/osteo-genic differentiation of human dental stem pulp cells (hDPSCs). Furthermore, LPCs also induced dentine–pulp complex regeneration as well as enabling continued root growth in the immature teeth treated[34].

In contrast, a recent study[33] reported that both LPCs and fresh PCs inhibited the mineralization potential during the first week of application. The authors speculated that the stem cells from the apical papilla (SCAP) used in the study were unique compared to other types of mesenchymal stem cells. This is because SCAPs have been certified to regenerate into vascularized dentine–pulp complex in vivo, and it is a stem cell niche that is known to be a source of odontoblasts during dental development. Notably, however, this study still highlighted the potential for application of LPCs in dental tissue engineering, particularly for the treatment of pulp necrosis and periapical periodontitis in immature teeth.

The interest in the application of tissue engineering and PC strategies for craniofacial wound repair has increased in interest in recent years. Nakajima[35] published a report on a LPC hybrid scaffold preparation using a polyglactin mesh for use as a wound dressing. One of its drawbacks, however, was the increased host inflammatory response that occurred due to the polyglactin degradation. Consequently, the use of a collagen sponge as a carrier for the LPCs has been explored[14]. It was found that the LPC coating improved the collagen sponge’s ability to attract and become infiltrated by fibroblasts, as well as promoting neo-angiogenesis in the surrounding tissue. The data indicated that the LPC-coated collagen sponge exhibited enhanced wound healing and regenerative capacity by stimulation of angiogenesis and infiltration of cells from surrounding tissue without causing a substantial inflammatory response. Furthermore, in the LPC-coated collagen sponge group, they identified considerably thicker capillary blood vessels compared to the noncoated sponge group at 4 weeks and 12 weeks post-implantation. This result is in agreement with Pietramaggiori[36], who noted that LPCs facilitated wound healing in a chronic wound model developed in diabetic mice. Interestingly, in contrast to the nontreated group, this study revealed a significant (p < 0.01) fivefold increase in blood vessel density in the LPC group. Recently, Xu et al.[15]suggested that the vascularization process was accelerated in their skin wound study in mice after using a scaffold composed of polyvinyl alcohol (PVA) hydrogel and LPCs as a dressing within 9 days post-surgery. Hence, they believe the neo-angiogenesis could provide oxygen and nutrient to the surgical site, thus promoting protein synthesis.

Guided tissue repair approaches are dependent upon growth factor activity. Incorporating PCs into a carrier system, such as a 3D scaffold, can enable controlled release of these molecules as well as enhancing their bioavailability. Kutlu [31] demonstrated that a chitosan scaffold loaded with PCs provided an excellent tool for multiple concurrent releases of PC-derived growth factors, and hence recommended its use in tissue repair purposes. Further research has assessed the applicability of LPCs as a scaffold for regeneration of craniofacial tissue and compared their biological effects with fresh PCs[17]. Dental follicle cells, periodontal progenitor cells, and alveolar bone cells were used in comparisons of their cellular activity in response to fresh and lyophilized PCs. The data indicated that LPCs exhibited superior effects compared with fresh PCs as a scaffolding material in terms of induction of proliferation, osteogenic differentiation, and tissue integration[17]. The authors concluded that the LPC preparations not only increased the capacity of cells to migrate and proliferate within the scaffold due to an increased pore size, but the construct also enabled a gradual release of growth factors, such as TGF-β1, PDGF, and VEGF from the biomaterial surface. Similarly, Liu[37]more recently reported that the lyophilization process enhanced the fibrin and platelet structures, enabling improved bioactivity.

As LPCs reportedly continuously release bone regenerating growth factors[13], Li and colleagues[30] compared the utility of 3D-printed polycaprolactone (PCL) scaffolds containing fresh PCs and LPCs for bone repair. The LPC–PCL scaffold exhibited superior stimulation of bone growth as compared with the conventional PC–PCL scaffold. Furthermore, their results indicated that in vivo, mineralization and osteogenesis could be promoted by coating 3D-printed PCL scaffolds with LPCs. The authors postulated that this outcome could be directly linked to the sustained release of PC-derived growth factors, including VEGF, PDGF, basic fibroblast growth factor (bFGF), TGF-β1, EGF, and IGF-1[30]. Table 2 summarizes the in vitro, in vivo and one randomized clinical trial application of LPCs to enhance tissue regeneration. Table 3 summarises the strengths and limitations of LPC.

2.3. Limitations of the Study

The dynamic biology of PCs and their role in tissue regeneration and inflammation have provided the basis for PC and LPC therapies for a wide variety of medical and dental treatments. However, scientific advancements remain hindered by the lack of standardization of PC and LPC products, doses, and fabrication protocols[38]. The situation continues to be ambiguous as the different approaches and materials used do not seem to produce the same material as original PCs. Moreover, heterogeneous processing methods, unstandardized nomenclature, and vague classifications complicate comparisons among studies; thus, we recommend a comprehensive, detailed and step-by-step explanation of the preparation procedure for the LPC to allow for comparison between studies, ensuring reproducibility to prevent misunderstanding and misleading assumptions in the literature (Table 3)[38][39][40][41].