Submitted Successfully!
Thank you for your contribution! You can also upload a video entry related to this topic through the link below:
https://encyclopedia.pub/user/video_add?id=7017
Check Note
2000/2000
Rice Husk
Edit
Upload a video
This entry is adapted from 10.3390/su122410683

Global rice and paddy production in 2018 was approximately 996 million tons as reported by the Food and Agricultural Organization [1]. The countries with the largest volume of rice and paddy production are located in Asia (China, India, Indonesia, Bangladesh, Vietnam, and Thailand). Rice husk is a residue produced during the rice mill process and on average, accounts for 20% of the paddy produced. The rice husk output in 2018 was approximately 199 million tons. Many countries use rice husks as a renewable energy resource for power generation [2]. The heating value of the rice husk is 15 MJ kg−1, and there is an energy potential of 2985 PJ available per year [3]. Currently, rice husks are burnt in simple incinerators for resident energy, industrial streams, and thermal power plants in most Asian countries. Several Asian countries such as India, China, and Thailand are operating gasification power plants using rice husks [4][5]. Gasification power plants using rice husks have power capacities ranging between 20 and 400 kWe; however, they are still in the demonstration stage [6]. One ton of rice husk generates 800 kWh of electric power [7] and after generating electric power, approximately 0.195 tons of rice husk ash is produced as a byproduct. High ash content in rice husks causes operational problems and consequently renders their thermal conversion difficult and expensive. Therefore, the valorization of rice husk ash for value-added material applications is important for improving the economic return of the entire process. In addition, the extraction of inorganic compounds from rice husks before energy generation could be worthwhile to reduce the burden of the energy production process.

The phase change of silica depends on the combustion temperature. The silica in rice husks is  a non-crystalline phase. As the combustion temperature increases over 600 °C, the phase transformation to tridymite and cristobalite starts [24]. However, the crystallization temperature varied depending on the chemical composition of rice husk ash [25]. It was also reported that pretreated rice husk remained amorphous up to 1000 °C. At higher combusting temperatures, the physical properties of silica also change. Zareihassangheshlaghi et al. compared the physical properties of rice husk ashes synthesized at 700 and 900 °C [26]. At a higher combustion temperature (900 °C), fewer metal impurities were observed. This might be due to the formation of more volatile and less stable phases that can be easily released into the gas phase. At this temperature, alkaline earth metal oxides can be refractory. At higher temperatures, the size of ash particles increases. Furthermore, the mesopores and micropores in the ash diminish after combustion at 900 °C. In rice husk ash, alkali metal impurities, such as K, P, Ca, and Mg, incorporate and form sticky alkali silicate at high combustion temperatures. This causes ash melting and agglomeration, which increases the size of particles and diminishes the meso- and micro-pores [27].

Previous studies report that combustion conditions could define the characteristics of silica; however, changes in characteristics could be within a narrow range: the specific surface area (11–39 m2 g−1), purity (29.7–96.7 wt%), and crystallinity (completely amorphous or partially crystalline) [25]. The characteristics of the shape, particle size, pore, and uniformity cannot be controlled by changing the combustion conditions. Therefore, chemical treatment should be followed to synthesize the engineered silica particles.

The main components of rice husk—cellulose, hemicellulose, lignin and inorganics—can be separated by their thermo-chemical properties. Figure 1 shows the phase changes of rice husk components depending on pH. Under acidic conditions, cellulose and hemicellulose are dissolved in the aqueous phase and can be separated from solid residues, mainly lignin and inorganics [28]. During the hydrolysis of polysaccharides, metallic impurities, such as K2O, P2O5, CaO, and MgO, were discarded by the washing step. Alkaline hydrothermal conditions induce the cleavage of ester linkages in lignin, which dissolves the lignin. After alkaline hydrothermal treatment, lignin can be removed from the solid residue [29][30]. The alkaline thermal treatment also dissolves silica and partially dissolves xylan to the liquid phase. The solubility of amorphous silica rapidly increases above pH 9.14 [31]. It can be again solidified by decreasing the pH. During solidification, silica particles can be engineered to have specific properties fit for their intended purpose. Residual organic compounds in the silica can be thermally removed at temperatures over 575 °C. 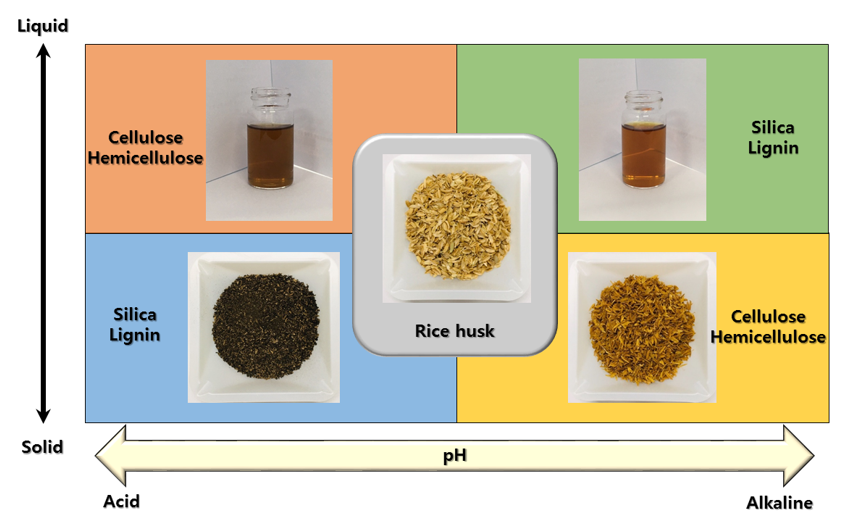 Figure 1. Phase change of rice husk components depending on pH.

Acid leaching to remove organic matter and metallic impurities from rice husks was conducted before or after the combustion process. Acid leaching can produce a higher purity and specific surface area when compared to without acid leaching [19][32][33][34]. Lee et al. compared the performances of three acid solutions—sulfuric acid, hydrogen chloride, and oxalic acid—to remove the organic matter and metallic impurities [19]. Sulfuric acid effectively dissolved and removed both cellulose and hemicellulose but was not effective in removing lignin. Both hydrogen chloride and oxalic acid mainly reduced hemicellulose. The removal of metallic impurities was investigated depending on the acid solutions. However, the capability of acid solutions to remove organic and metallic impurities in rice husk varied depending on the solution’s concentration, and the reaction time and temperature [35]. Traditionally, the acid leaching of rice husk was performed with sulfuric acid, hydrogen chloride [36], and nitric acid [33]. The use of a strong acid solution is significantly hazardous to the environment and human life. In addition, strong acid leaching produces not only soluble sugars but also smaller compounds such as aliphatic carboxylic acids and furans, which are inhibitors to microbes and enzymes. Therefore, attempts to replace these strong acid agents with environmentally harmless agents have been reported [19][37][38][39][40].

The environmentally harmless agents used to remove organic matter in rice husks were citric acid, ionic liquid, and deionized water. The use of citric acid could remove metallic impurities such as Na, K, Ca, Mg, Fe, Cu, etc., through a chelate reaction between carboxyl groups and metal elements [37][38]. Ionic liquids are green solvents and are effective in dissolving polysaccharides. The ionic liquids used to remove polysaccharides and metallic impurities from rice husks were 1-butyl-3-methylimidazolium chloride and 1-butyl-3-methylimidazolium hydrogen sulfate. The dissolved cellulose can be recovered by mixing with distilled water and further used to produce fermentable sugar [41]. Trinh et al. reported that ionic liquid-treated cellulose significantly changed its crystallinity, surface morphology, and composition, resulting in improved enzymatic digestibility. Conventionally, lignocellulose in rice husks is simply burned to generate energy, which leads to air pollution. However, the use of ionic liquid-treated cellulose to produce biofuel does not produce any pollutants. Therefore, using ionic liquids improves both the purity of silica and the comprehensive utilization of lignocellulose. Shen et al. used deionized water to leach metallic impurities, but water leaching was effective only on the external surface [40]. Mochidzuki et al. performed water leaching under pressurized conditions using a batch autoclave and steam explosion [42]. Both autoclave hot-water and steam-explosion-treated silica showed improved purities, even comparable to those obtained with the hydrochloric acid treatment. The pressurized water treatment dissolved some portion of the silica in hot water and changed its structure, which is more applicable to the synthesis of water-glass-like materials.

Most studies reported that acid leaching could improve the amorphousness of silica [19][39][43]. Alkali metals in rice husks facilitate the initiation of the formation of cristobalite, which causes the phase transformation of the silica [44]. Acid leaching could remove alkaline metals, which prevent the phase transformation of the silica. In addition, Real et al. reported that the leaching of rice husks with an acid solution before their combustion would yield silica powder with a high specific surface area [32]. However, if the acid leaching was performed after combustion, the specific surface area of silica would be poor.

Silica can be extracted from rice husk by solubilizing it in an alkali solution and precipitating in an acidic medium. In general, sodium hydroxide was used to extract silica from the rice husk as sodium silicate. The following formula represents the chemical reaction:

Various hydrothermal conditions were used for the alkali extraction of silica. Most studies have prepared rice husk ash or acid-treated rice husk before the alkali extraction. Typically, thermal treatment is performed before alkali extraction to remove lignin. Otherwise, both lignin and silica were extracted from rice husks by alkali solution, which affected the quality of sodium silicate. In addition to the thermal treatment, organosolv fractionation can be applied to separate lignin by organic solvents such as ethanol [45] and 1,4-butanediol [46]. Rice husk ash was dissolved in sodium hydroxide solution at 80 °C [47], 90 °C [21][48], 100 °C [49], and even 150 °C [50]. In addition, a considerable amount of research has reported the performance of alkali extraction at room temperature [51][52][53][54][55]. In this case, rice husk ash was ground down to micron-sized particles and reacted for 24 h. The concentrations of sodium hydroxide were varied in the range of 1–10 M, which determined the reaction time. Bazargan et al. showed the removal of lignin and silica from the rice husk, not rice husk ash, by the assistance of sodium hydroxide and hydrogen peroxide [56]. However, recoveries of silica and lignin in alkaline peroxide solution were only 75 and 60%, respectively. Alkali extraction degrades lignin into phenolic compounds, such as benzoic acid, ferulic acid, and coniferyl aldehyde, and those cannot be utilized in further process.

More
© Text is available under the terms and conditions of the Creative Commons Attribution (CC BY) license; additional terms may apply. By using this site, you agree to the Terms and Conditions and Privacy Policy.
Upload a video for this entry
Information
Subjects: Others
Contributor MDPI registered users' name will be linked to their SciProfiles pages. To register with us, please refer to https://encyclopedia.pub/register :
Jin Hyung Lee
View Times: 591
Revisions: 2 times (View History)
Update Time: 17 Jan 2022
Table of Contents
1000/1000
Hot Most Recent