Submitted Successfully!
Thank you for your contribution! You can also upload a video entry related to this topic through the link below:
https://encyclopedia.pub/user/video_add?id=6986
Check Note
2000/2000
Virus-Encoded Complement Regulators
Edit

Viruses require a host for replication and survival and hence are subjected to host immunological pressures. The complement system, a crucial first response of the host immune system, is effective in targeting viruses and virus-infected cells, and boosting the antiviral innate and acquired immune responses. Thus, the system imposes a strong selection pressure on viruses. Consequently, viruses have evolved multiple countermeasures against host complement. A major mechanism employed by viruses to subvert the complement system is encoding proteins that target complement. Since viruses have limited genome size, most of these proteins are multifunctional in nature.

Viruses face constant challenges from the host due to host resistance, and the environment because of variations in temperature and humidity. Nonetheless, they adapt to these dynamic changes to become the most successful pathogens [1]. The success of virus infection and propagation is determined by many host factors as well as host-virus interactions.

The concept of host resistance to infection was first documented by the Greek historian Thucydides, who provided an eye-witness account of the plague that struck Athens between 430–427 B.C. [2]. However, it was only in the early 20th century that Mechnikov developed the theory of cellular immunity and Ehrlich established the idea of humoral immunity. Yet another critical observation that was made by multiple researchers during the late 19th century was a bactericidal activity of normal serum. Following these studies, in 1895, Bordet showed that bactericidal activity is owing to antibody and a preexisting ‘heat-labile component’ (later dubbed as complement by Ehrlich), which marked the beginning of complement research [3]. He also developed the complement fixation test [4], which became a valuable tool for the diagnosis of various viral diseases and establishing antigenic relationship among viruses. In 1919, he received the Nobel Prize in Medicine for his pioneering work.

The 20th century saw the beginning of the rise of the complement field. It became clear that complement is not a single entity; instead, it is a system that is activated by multiple pathways involving a complex cascade of protease activation. It also became apparent that the system is tightly regulated at various activation steps and lack of regulation results in disease. The characterization of effectors revealed that the system targets pathogens by marking them as ‘non-self’ by opsonins and such tagging of pathogens results in their phagocytosis through complement receptors and lysis owing to loss of their membrane integrity. The complement-activated serum was also shown to have ‘anaphylatoxin’ activity, which was later found to be associated with smooth muscle contraction, enhanced vascular permeability and recruitment of white blood cells [5]. As expected, this activity was demonstrated to contribute to containing localized infections [6]. In the later part of the century, it also became clear that the complement system participates in enhancing pathogen-specific B and T cell responses [7][8] as well as induction of an antiviral state [9].

Thus, it is evident from the above account that complement is a formidable defense against infectious agents, including viruses, as it can not only act directly on pathogens but also enhance innate and adaptive immunity against them. The evolution of viruses, nevertheless, is shaped by constant host-induced pressures [10]. Hence it is not surprising that viruses have developed mechanisms to thwart complement attack. These include encoding molecules to subvert the complement system, acquisition of host complement regulatory proteins, employment of complement receptors for cellular entry and upregulation of host complement regulatory proteins on the infected cells.

The first virally encoded molecule that was identified as a complement regulator was herpes simplex virus type 1 (HSV-1) glycoprotein C (gC-1) (Figure 1). In 1982, Harvey Friedman and his group from the University of Pennsylvania observed that human endothelial cells infected with HSV-1 express a C3 receptor [11]. Later, they identified this molecule as gC-1, which has no homology to the known complement receptors [12]. Detailed studies revealed that the molecule is not a receptor; instead, it functions as a C3 regulator [13]. Such mechanism of complement regulation, however, was not unique to HSV-1 as a structurally similar glycoprotein present on HSV-2 could also inhibit complement [14]. 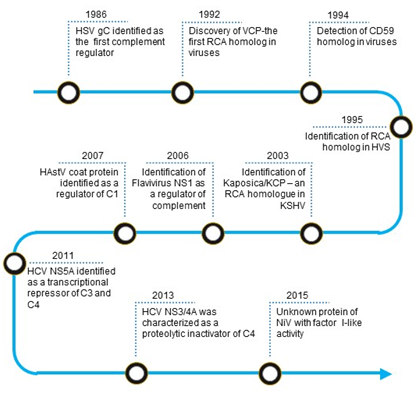 In humans, the major complement regulators belong to a gene family termed the regulators of complement activation (RCA). These regulators are exclusively formed by concatenated bead-like domains—the complement control protein (CCP) domains [15]. A homolog of the RCA gene family proteins was first reported in the vaccinia virus in 1988 by Kotwal and Moss [16]. Its biochemical characterization established that the protein essentially functions as human regulators [17]. In a quest to identify such RCA homologs in other viruses, various laboratories examined viral genomes for the presence of sequence homologs. They discovered that apart from poxviruses, RCA homologs also exist in gammaherpesviruses, including Kaposi’s sarcoma-associated herpesvirus [18][19][20]. We now know that functionality in these proteins is dictated by the presence of spatially conserved motifs [21].

The membrane attack complex (MAC) is a critical effector of the complement system that can form pores on the plasma membrane of the target cells. Consequently, its formation on the viral envelope results in loss of viral integrity. In 1992, based on sequence similarity, a group at the Institut fur Klinische und Molekulare Virologie, Erlangen discovered that Herpesvirus saimiri (HVS) encodes a homolog of human CD59 [22]. Later, the laboratories of Stephen Squinto as well as Peter Lachmann, showed that the protein indeed has an ability to block complement-mediated cytolysis [23][24].

Besides RCA and CD59 homologs, various other non-structural viral proteins are known to mediate complement evasion. Among these, non-structural protein 1 (NS1) of flaviviruses is known to subvert the complement system. In the 2000s, the laboratories of John Atkinson and Michael Diamond at the Washington University in St. Louis demonstrated that secreted hexamer of NS1 in particular recruits complement regulators such as factor H and C4b-binding protein onto the infected cells and protect them from complement attack [25][26]. Additionally, the hexamer was also shown to antagonize complement C4 in solution [27]. Ranjit Ray’s laboratory at St. Louis University School of Medicine showed that the non-structural proteins of hepatitis C virus subvert complement by utilizing different mechanisms. NS5A transcriptionally downregulates the expression of complement components like C3, C4, and C9 which participate in complement activation, while NS3/4A proteolytically inactivates C4 [28][29][30].

The complement proteins C1q and mannose-binding lectin (MBL) are pattern recognition molecules which deftly recognize viruses. In the 2010s, it became clear that viruses have also developed mechanisms to block the interaction of these pattern recognition molecules with viruses. The laboratory of Neel Krishna at the Virginia Medical School showed that the astrovirus capsid protein interacts with C1q and inhibits the classical pathway of complement activation likely due to the displacement of protease tetramer C1s-C1r-C1r-C1s [31]. The capsid protein was also shown to interact with MBL and inhibit the lectin pathway [31]. In addition to the capsid protein of astroviruses, the M1 protein of Influenza A virus was also shown to interact with C1q and inhibit the classical complement-mediated neutralization of the virus [32].

Virus replication is initiated after its attachment to a cell, which is then followed by its cellular entry, uncoating, replication, assembly, and release. Thus, before its entry and after the release, the virus is in the extracellular milieu, while during the other stages, it is inside a cell. An effective innate immune defense, therefore, must target both phases of the virus life cycle. Notably, all the major complement pathways—classical, alternative, and lectin—are potent in targeting cell-free viral particles as well as the virus-infected cells [34][35][36][37]. Moreover, as stated above, the system also boosts other antiviral innate and acquired immune responses  to limit the viral infection. Studies on the complement subversion mechanisms of viruses have shown that viruses employ structural (i.e., components of the viral particles) as well as non-structural proteins to subvert these responses (Figure 2 and Table 1). Table 1. Viruses and their complement regulators.