Submitted Successfully!
Thank you for your contribution! You can also upload a video entry related to this topic through the link below:
https://encyclopedia.pub/user/video_add?id=6884
Check Note
2000/2000
Negative-Sense Single-Stranded RNA Viral Factories
Edit
Upload a video
This entry is adapted from 10.3390/v13010126

Among all virus taxa, the phylum Negarnaviricota embodies all viruses with RNA genomes of negative polarity [1]. This includes viruses with either non-segmented negative-sense (NNS) or segmented negative-sense (SNS) RNA genomes. NNS RNA viruses of order Mononegavirales (notably families Paramyxoviridae, Bornaviridae, Rhabdoviridae, Filoviridae, and Pneumoviridae) and SNS RNA viruses such as Influenza A (family Orthomyxoviridae) have historically caused severe human infectious diseases, some with high mortality. These pathogenic viruses have been the center of research efforts to better understand their replication mechanisms at the molecular and cell biological levels [2].

Structure-function studies of NNS and SNS RNA viruses have bridged disciplines between molecular virology and cell biology via elucidating the mechanisms by which viruses replicate. For Negarnaviricota, a virion-associated RNA-dependent RNA Polymerase (vRdRP) is the hallmark of viral mRNA transcription and genome replication [1]. Within the nucleocapsid, both NNS and SNS RNA genomes are encapsidated by viral nucleoprotein (N or NP), forming the stable helical ribonucleoprotein (RNP) complex. Structural studies have been conducted to characterize viral RNPs for several NNS RNA viruses, including vesicular stomatitis virus (VSV) [3], rabies virus (RABV) [4], respiratory syncytial virus (RSV) [5], parainfluenza virus type 5 (PIV5) [6], and Ebola virus (EBOV) [7]. Upon infection by these mononegaviruses, viral macromolecular synthesis is cytoplasmic (with exception of Bornaviridae where it is nuclear). This is illustrated by the Figure 1 schematic summary of measles virus (MeV) replication. The vRdRP Large (L) polymerase protein with polyribonucleotidyltransferase and methyltransferase activities complexes with its viral processivity factor phosphoprotein (P, VP35 for Filoviridae), thereby tethering L to viral RNP for the initiation of de novo RNA synthesis [8][9][10][11]. In contrast, the vRdRP of SNS viruses utilizes a cap-dependent endonuclease to cannibalize host cellular mRNA caps and directly initiates de novo RNA synthesis of each viral RNP segment without the necessity of a phosphoprotein [12][13][14][15]. Collectively, these structural-functional foundations highlight necessary components for viral macromolecular synthesis among the NNS and SNS RNA viruses. 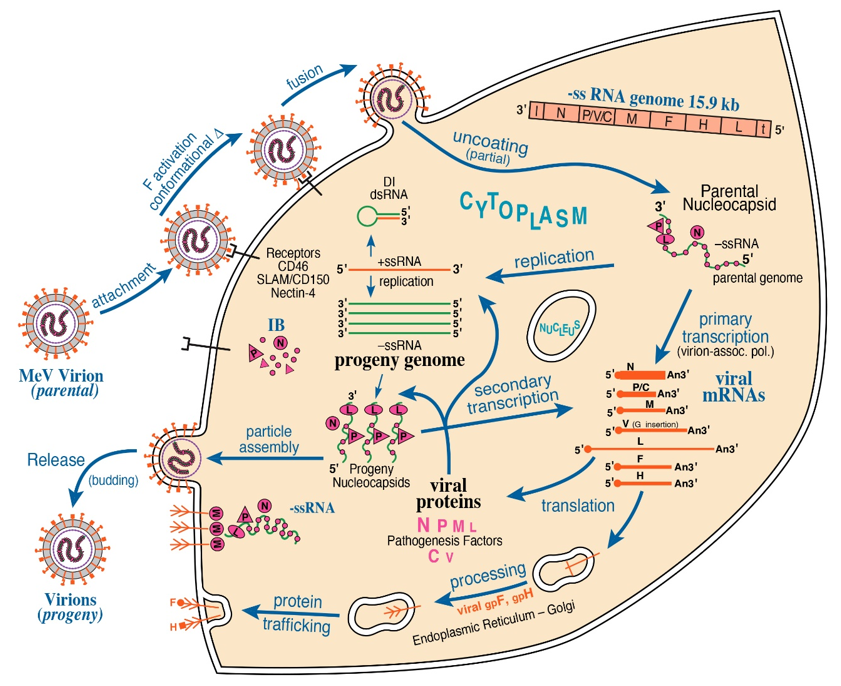 Inspired by theories from soft matter physics, liquid phase condensates are an emerging paradigm for the intracellular organization of membrane-less organelles [16][17][18][19], which differentiates them from classic membrane-bound organelles. Membrane-less and dynamic, these biomolecular condensates compartmentalize diverse structures such as the worm P granules [20], the chromatin [21][22][23], nucleolus [24][25], Cajal bodies [26], PML bodies [27], nuclear speckles [28], P bodies [29], stress granules [30][31], and spindle apparatus [32]. Condensate formation has also been implicated in membrane deformation [33], cargo sorting [34], autophagosome formation [35], transcriptional activation [36][37][38], and stress-induced proteasome-mediated protein degradation in the nucleus [39]. Driven by multivalent macromolecular interactions, these biomolecular condensates are formed via liquid–liquid phase separation (LLPS), with assembly/disassembly regulated by an array of physicochemical factors [16][17][18][19][40]. Notably, biomolecular condensates can adopt a wide range of viscosities: from liquid, to gel, to solid-like states under physiological conditions. For example, unlike the stress granules in human cells that exhibit liquid properties, stress granules in yeast are more solid in nature, presumably the result of adaptation to extreme environments [29]. Similarly, Balbiani bodies of immature oocytes are solid-like structures which likely protect the organelles during oocyte dormancy [41]. On the other hand, the nuclear pore complexes form a gel-like channel which is important for maintaining its permeability barrier [42][43]. Although the functions of these novel phase-separated subcellular structures continue to be elucidated, the primary purposes of these multiphase compartments are thought to increase reaction rates and/or specificities, sequester and/or buffer molecules, and dynamically reorganize molecular hubs [16][17][19].

The authors have observed the aforementioned paradigm of LLPS extending from cell biological contexts to viral molecular condensates. In retrospect, studies on NNS and SNS RNA viruses played a major role by revealing an unappreciated link between LLPS and virology. Here, the authors reviewed studies on viral liquid phase-separated cytoplasmic organelles seen among NNS RNA viruses, exploring their formation, functions, and eventual ageing as viral factories. They discussed future directions of study of these liquid organelles and their prospective roles in the viral replication cycle, host responses to infection, and clinical relevance. The LLPS-mediated cytoplasmic condensate has also been shown for Influenza A virus (IAV, a member of SNS RNA viruses) [44]. Compared to NNS RNA viruses, the influenza viral condensate has a different composition (e.g., the lack of a phosphoprotein) and function (e.g., the lack of a role in genomic replication) [45], and thus was not included in the discussion below.

2. The Nature and Formation of Viral Liquid-Like Organelles

Cytopathic effects from viral infections were well observed in cytological studies and clinical diagnosis [46][47][48], one predominately being the appearance of inclusion bodies (IBs) in the cytoplasm and nucleus. Historically, it has been suggested that either viruses may utilize these inclusions to concentrate viral and host proteins for facilitating viral replication and/or assembly, or the host may orchestrate the inclusion formation in response to viral infection to store viral proteins for degradation [49][50]. As studies progressed, these IBs more commonly became referred to as viral factories, viroplasms, and virosomes [51]. Because the term inclusion bodies is also widely used by biologists and biochemists to describe the insoluble aggregates formed by unfolded or misfolded proteins, it has been proposed to rename these structures or define them based on an identifiable marker [52]. While the field awaits consensus of a new nomenclature, the authors  adopted the conventional terminology throughout the article.

As a hallmark of infection by NNS RNA viruses, the formation of IBs is observed in the cytoplasm of cells infected by paramyxoviruses (e.g., measles virus (MeV) [53][54], mumps virus (MuV) [55], Nipah virus (NiV) [56], parainfluenza virus type 3 (PIV3) [57], and PIV5 [58]), pneumoviruses (e.g., RSV [59] and human metapneumovirus (HMPV) [60]), rhabdoviruses (e.g., RABV [61] and VSV [62]), and filoviruses (e.g., Marburg virus (MARV) [63] and EBOV [64]). These membrane-less supramolecular constructions are spherical when they are small during the early times after infection, and then progress to become heterogeneous in shape and size over time. In many cases, these cytoplasmic inclusion bodies serve as the site of viral replication by concentrating their RNA replication machinery [58][60][61][62][63][64][65].

Biomolecular condensates of proteins and nucleic acids can form a membrane-less organelle via LLPS. Whereas the exact criteria for defining LLPS are still evolving, and additional characteristics have been described, a general consensus in the field is that a LLPS compartment should fulfill the following three criteria: maintaining a spherical shape; fusing with each other after contact; and exchanging molecules with its surrounding environment [66]. Interestingly, several earlier studies including those of EBOV [64] and PIV3 [57] observed the fusion events between small IBs. In addition, Borna disease virus (BDV), a member of the bornaviruses characterized by persistent infection and replication in the nuclei of infected cells, forms nuclear inclusions that actively exchange viral proteins with the surrounding milieu [67]. Based on these observations, together with the fact that viral IBs do not have an enclosing membrane but do contain a high level of viral proteins and RNA as well, it has been tempting to link the formation of IBs to LLPS. Studies on RABV [68], VSV [69], and MeV [70] established that two IBs can fuse and subsequently relax to form a larger spherical IB, displaying hallmarks of surface tension, and that IBs show reversible molecular exchange with the surrounding cytosol after photobleaching. Collectively, these findings established that IBs of these viruses are liquid in nature and phase separate from the cytosol via LLPS.

Whether the formation of IBs with liquid properties represents a universal feature of NNS RNA viruses remains to be determined. Based on the spherical morphology of RSV IBs [52] and the diffusion of N protein observed for the pseudo IBs formed in transfected cells [71], it is very likely that RSV IBs are membrane-less liquid organelles. Moreover, evidence was provided that these IBs are sites of RSV replication. On the other hand, NiV generates two types of IBs, but the viral RNA synthesis appears to occur outside of these structures. One type of IB adopts spherical shape located in the perinuclear region, and the other type has a lamellar or square shape underneath the plasma membrane [56]. These two types of IBs arise independently; covalently-modified viral matrix M protein recruits the nucleocapsid to the plasma membrane and drives the formation of the plasma membrane-associated IBs. Based on these observations, it was proposed that the membrane-associated IBs are sites of virion assembly, whereas the perinuclear IBs are aggresome-like structures [56]. While fusion was detected between pseudo-perinuclear IBs formed in transfected cells, no fusion events have been observed between plasma-membrane associated IBs in both transfected and infected cells. Thus, further studies are needed to determine whether LLPS plays a role in the formation of either IBs formed by NiV.

A transfection approach in the absence of viral infection was used to identify the minimal viral components involved in the formation of RABV, VSV, MeV, and RSV IBs. A common theme that emerged from these results is that co-expression of N and P proteins in transfected cells is either sufficient (for RABV [68], MeV [70], and RSV [71]) or required (for VSV [69]) to generate structures morphologically similar to viral IBs. Moreover, in the case of RABV, MeV, and RSV, co-expression of N and P alone forms IB-like structures that exhibit liquid properties such as fusion/relaxation and/or molecule exchange. These findings were subsequently corroborated and extended by an in vitro reconstitution using MeV [72] and RSV [71] N and P recombinant proteins purified from E. coli. The transfection-based and in vitro systems further allow the mapping of the domains within N and P necessary for the IB formation. Not surprisingly, the domain of P mediating its interaction with N (PCTD for RABV, VSV, and RSV; XD for MeV) is required for the formation of IBs. In addition, the dimerization domain (for RABV and VSV) or tetramerization domain (for MeV and RSV) of P protein, and an intrinsic disorder region (IDR) of P (IDD2 for RABV, Ploop for MeV, and a.a. (160–227) for RSV), also play an important role. The oligomerization domain and IDR are two common protein structures contributing to the multivalent interactions underlying LLPS [19]. Taken together, these studies demonstrate that the nucleoproteins and phosphoproteins can be viewed as the basic scaffold for formation of the liquid-like IBs during NNS RNA virus infection. Interestingly, whereas expression of the nucleoprotein NP alone seems sufficient for EBOV IB formation with its C-terminal domain being necessary for this process, co-expression with the phosphoprotein VP35 can rescue the deletion of the C-terminal domain of NP to trigger IB formation [73]. Thus, even whether EBOV IBs are liquid organelles remains unknown, VP35 likely plays a role in the formation of IBs in vivo.

More
© Text is available under the terms and conditions of the Creative Commons Attribution (CC BY) license; additional terms may apply. By using this site, you agree to the Terms and Conditions and Privacy Policy.
Upload a video for this entry
Information
Subjects: Virology
Contributor MDPI registered users' name will be linked to their SciProfiles pages. To register with us, please refer to https://encyclopedia.pub/register :
Justin Su
View Times: 388
Revision: 1 time (View History)
Update Time: 29 Jan 2021
Table of Contents
1000/1000
Hot Most Recent