Submitted Successfully!
Thank you for your contribution! You can also upload a video entry related to this topic through the link below:
https://encyclopedia.pub/user/video_add?id=6360
Check Note
2000/2000
Citizen-Centric Smart Cities
Edit
Upload a video
This entry is adapted from 10.3390/su13010376

The citizen-centric smart city is conceptualised from the citizenship perspective which stressed on the citizen's responsibilities and participatory governance practices in a smart city (Malek, Lim and Yigitcanlar, 2021). This conception argues that instead of the traditional view on fulfilling the citizen's needs, the citizens should co-produce, participate and contribute to building the smart city together with the government and corporates.

To date, considering citizens’ perceptions about and perspectives of smart city development is seen as a sound strategy for many political and administrative leaders. Particularly, this has taken the form of promoting eGov (citizen centricity in e-government) that has been upheld in Europe since the mid-2000s [10] and is rooted in the perspective of “citizens as customers” under the new public management [11]. Based on this influence, apart from technological needs or smart cities, in recent years, city administrators have shifted their focus to co-creating smart cities with their citizens [12][13][14][15].

The rhetorical smart city visions in emerging and developing countries [16][17], such as the slogans of the federal government of Malaysia and the state government of Selangor’s “Peduli Rakyat” (literally care for citizens) [9], have rightly inspired and motivated the general public, who are entirely depending on government resources or actions. Nevertheless, the targeted passive users, beneficiaries, or the public are unaware of their responsibilities, even though “citizen-centric smart city initiatives are rooted in stewardship, civic paternalism, and a neoliberal conception of citizenship” [10]. These neoliberal conceptions “prioritized choice of consumption and individual autonomy within a framework of state and corporate-defined constraints that focused on market-led solutions to urban issues, rather than being grounded in civil, social, and political rights, and the common good” [10]. In other words, the market-led solutions put a high dependency on corporate technological sectors in most of the current forms of smart urban governance and tokenize the proactive response from users/citizens [11]. More so, [12] rightly pointed out that the citizen-centred idea is less compatible with neoliberalism because local governance needs to prioritize offering incentives to investors if it is to compete within the world system of cities.

Furthermore, in studies that investigated citizen centricity in smarter cities [13], the main interest was concentrated on measuring a citizen-centric approach by monitoring cities’ abilities to safeguard citizenship rights. However, in a more holistic view of the citizenship regime [14], citizenship should include rights, governance practices, and citizens’ responsibilities. Additionally, some recent studies [15][16] revealed that the current British Smart City Standards and the Malaysia Smart City Framework have an explicit citizenship rationale for guiding the standards and development of a smart city, although these guidelines displayed some substantial shortcomings and contradictions.

These shortcomings include superficial and unclear explanations of the citizenship regime in forming a citizen-centric smart city and contradictions in citizens’ priorities against the profit gained from technological markets and the legitimacy of paternity governance.

2. The Conception of Citizen Centricity in Smart City Development

The notion of citizen centricity in (smart) city development is not a novel one and is perceived as a continuous trend in the development of e-government, which started in the mid-2000s. It is in line with the concept derived from new public management, where citizens should be viewed as customers to improve public service delivery. As customers, the demands of services have implications that are likely to turn citizens into passive users or beneficiaries who receive and demand from public administrators. It was argued that in constructing a citizen-centric smart city (CCSC), there should be no generalizations in viewing citizens as customers. In fact, there is a need to seriously research and construct a CCSC from the perspectives of both citizenships (to explain the notion of citizen centricity) and literature on the conception of the smart city conception.

The theoretical framework of a CCSC formed by Malek et al. (2021) is the first structured framework of its kind in the literature on smart cities (Figure 1). This CCSC theoretical framework thoroughly explains the original combination of the source of references for the notion of citizen centricity and the smart city concept. From these combinations, it was revealed that the construction of such detailed indicators and citizenship conception should include three major components, namely, citizens’ rights (not included in this study, as it was already detailed by [13][17]), citizens' responsibilities, and the practices of citizen participation in governance. This framework is unique, as the framework is viewed from a fundamental perspective of what citizens can contribute to the formation of a CCSC. The focus of the indicators originated from the perspective of the citizens rather than the government’s point of view. Such a perspective would make the role of citizens proactive and similar to the conception of self-organizing cities [18][19][20], which developed beyond the current neoliberal smart cities. 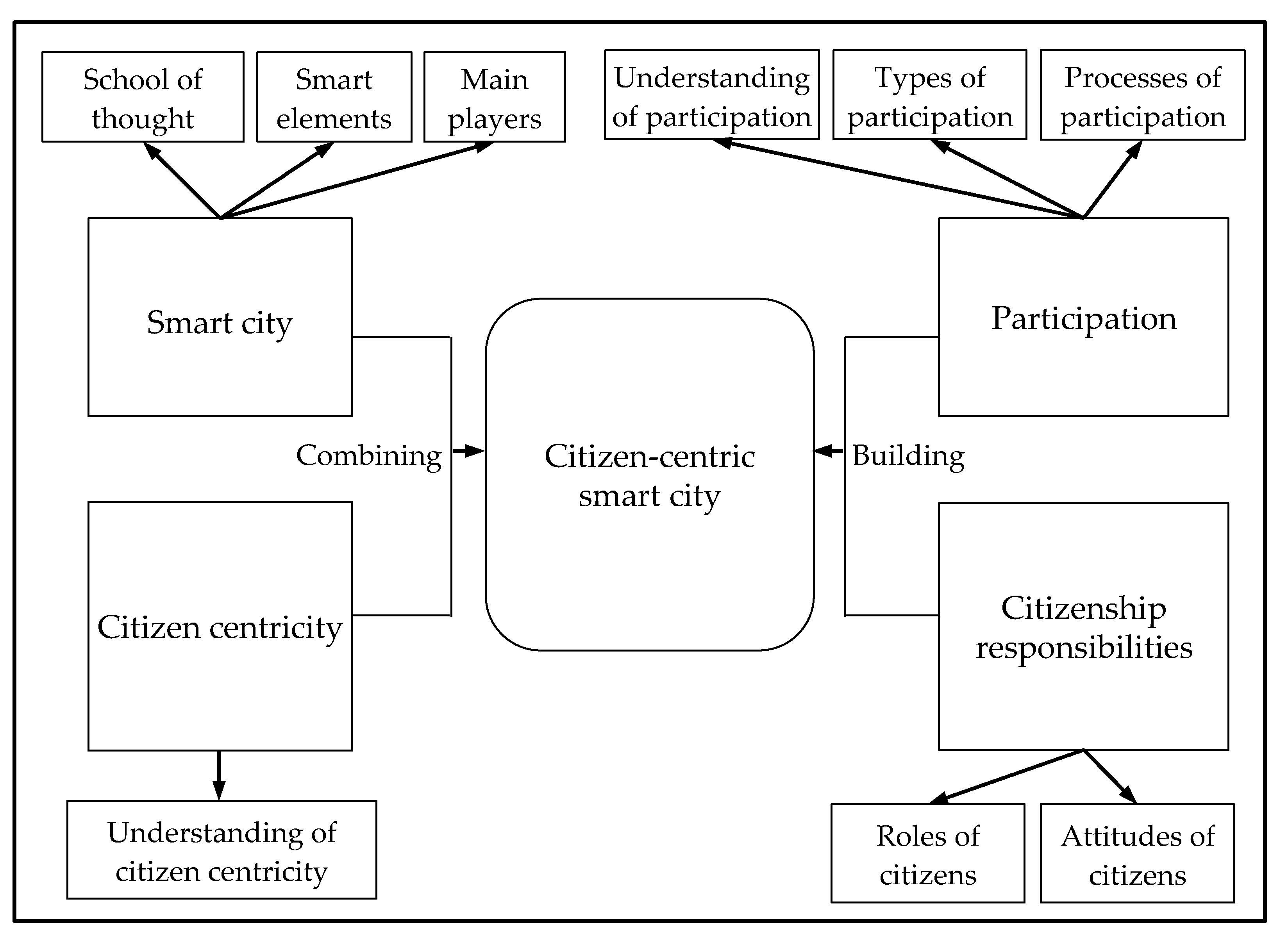 From such a theoretical framework, Malek et al. (2021) has attempted to construct a conceptual framework consisting of six constructs and 47 items (Figure 2). All the constructs were verified carefully by 38 practitioners in the fields of smart city development and community participation. The first stage of the formation of indicators was derived from the majority of literature reviews from scholars in developed Western countries, hence outlining the holistic scope of citizenship notions. Moreover, practitioners from emerging and developing countries with comparatively lower democracy and citizenship conceptions, such as Malaysia, tended to agree with all the indicators from the Western literature and included additional examples from the local context to gain a better understanding of the residents. Thus, the design of such indicators could be said to suit both developed and developing countries. Concerning future implementations, the examples of particular items should be altered with caution to suit other local contexts. 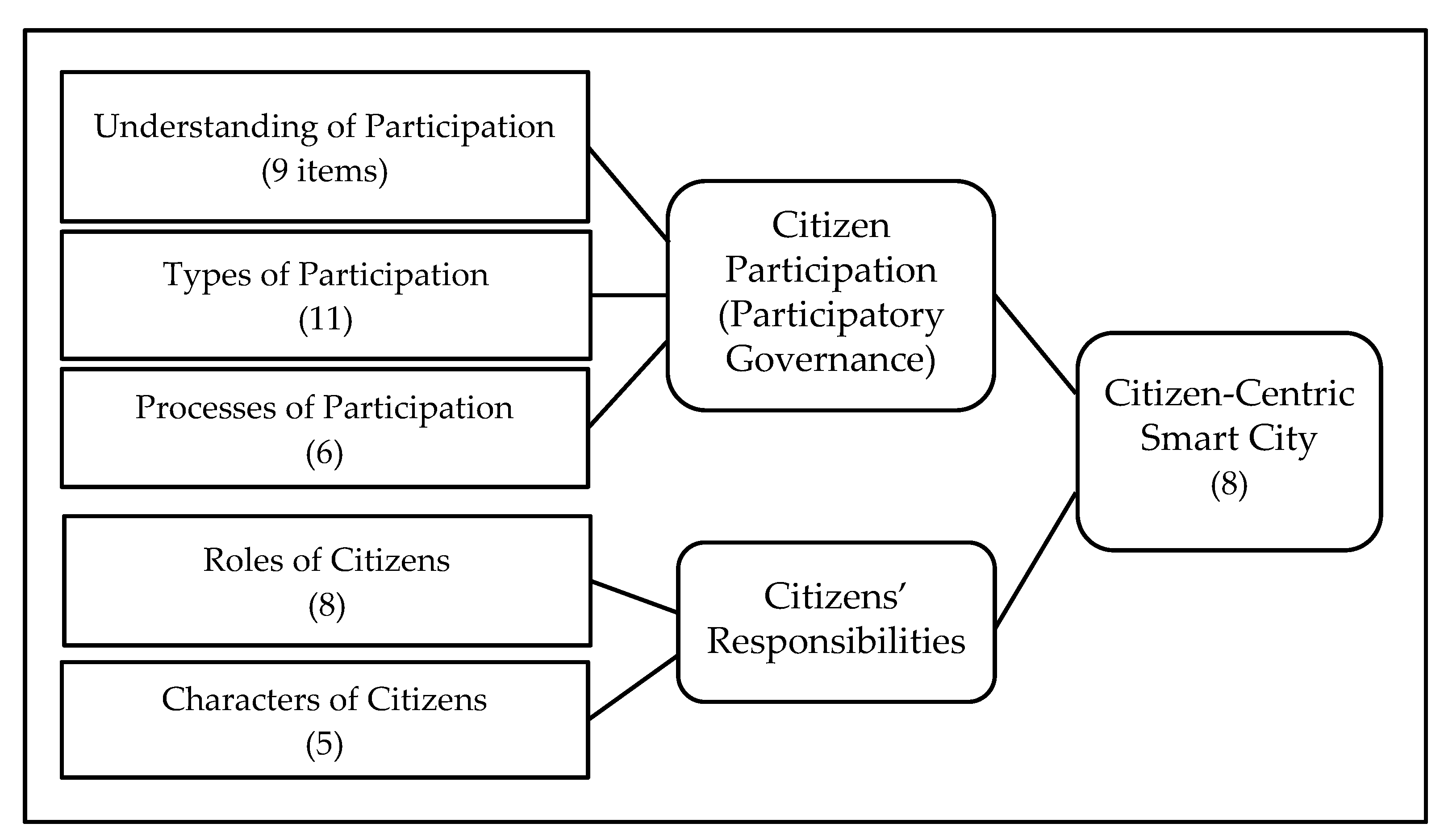 Malek et al. (2021) predict that further studies on empirical survey results could yield a less significant result on some indicators, as the mindset and acceptance of democracy and the rights in emerging and developing countries, such as Malaysia, could be lower compared to developed countries. Hence, the full acceptance of the indicators is not possible, as the democratic innovations of developing countries are faced with challenges and restrictions [30]. The proposed democratic innovation includes expanding the role of citizens as co-producers [31], which is rarely practised in developing countries. Furthermore, with regard to the usage of political slogans in building a CCSC, leaders may appear insincere if people are tokenized as customers with needs to fulfil but not cultivated and given the opportunities to participate in governance practices. Thus, Malek et a. (2021) are fully aware of the challenges and costs of participatory and deliberative governance [29]. However, to intervene in such neoliberal smart urbanism [32] and realize the possibility of “self-organizing” smart cities, these CCSC indicators are worthy of reference and can be modified in different contexts.

The potential self-organizing cities led by local stakeholders could emerge as responses to unsatisfactory government-driven processes, market failures [33], the intention to legitimize a government’s retreat from sectors that have traditionally played a vital role [33], or the intervention of e-participation through digital technologies [34][35]. This self-organizing and more democratic realm of a CCSC has led to three levels of discussion. The first level is the democratic culture of a country, the leaders’ understanding, and the delegation of decision-making power in governance. The second level is society’s perception of citizenship, the participative culture of societies, and the lack of links to decision-making [36]. The third level is the individual citizens’ discipline and contributions to the country or city.

For an emerging and developing country like Malaysia, the dual forms of Islamic and secular administrations and constitutions are often criticized by scholars in the context of democracy [37][38][39]. Such a context hints that the highest constitution is not as open to democracy as practised by Western countries. Canada, for example, has the Citizenship Act, the Charter of Rights and Freedoms, and the Multiculturalism Act [40][41][42], as opposed to Malaysia. Another example is the Nordic welfare society in the context of a democratic culture, welfarism, and redistributive policies that provide support to the development of participatory and innovative platforms by strengthening social inclusion, regulating the growth mechanisms, and easing the tensions between pro-growth and anti-growth coalitions [43].

In Malaysia, “participatory governance practice” is a tokenized term under the current top-down policy governance practices. The majority of government administrators “listen” and act according to political masters, but less focus is given to grassroots suggestions [44][45]. The lack of participatory governance practices was also similar to other developing countries, such as India, China, and Egypt [46][47]. In developing India’s 100 smart cities, [46] questioned the liberal electoral democracy in India on the exten[48]t to which a smart city can deliver de facto inclusion and participation. [49] added that, instead of testing Indian smart cities as the grounds for democratic participation, smart citizens were nudged as subaltern citizens in urban governance. In China’s smart-eco city projects, [50] reported that citizen input in the decision-making phase was quite limited, hence suggesting legislative reforms and the professionalization of Chinese officials in dealing with bottom-up input. In Egypt, [47] recommended that the Egyptian government focus specifically on smart people, such as giving citizens equal opportunity to participate in public decision-making.

At the level of society, the culture of participation in government programs is considered to be low [9][48]. From studies based on the Petaling Jaya and Cyberjaya smart city cases [9], the low level of participation was not interpreted based on the moderate quantity of participative programs involving citizens in the implementation stages, but the interpretation was based on the particularly low (even none) quantity of programs that empowered citizens at the initial stage of decision-making. The situation in Malaysia resembles making “decision by decision,” where the community has no liberty to decide, is constrained by decisions from authorities, and is at the mercy of the authorities [9]. Furthermore, as described by [51], in the context of Amsterdam and Amersfoort, The Netherlands, “self-organization seems to take place in the shadow of a government hierarchy: either a fear-based one or a benevolent one,” particularly in the context of meta-governance. In the context of Helsinki, Finland, self-organization also lacked links to decision-making, thus constraining new solutions and creative actions [36].

Such contexts indicated that society’s mindset is still conservative, with a vague understanding of the citizenship’s regime, leading to a possibly high dependency of people on the government. The evidence in Malaysia, such as the withdrawal of participation from the Rome Statute of the International Criminal Court [52] and the human rights issues evoked by racially and religiously motivated political parties, had correctly signalled the relatively low appreciation of equality in human rights when race- and religion-based interests are challenged.

At the level of individual Malaysian citizens, people’s self-discipline would increase with the realization of a CCSC. For example, the role of volunteers, local champions, and co-producers with characteristics of proactiveness and awareness of CCSC development are all important responsibilities that a citizen has to contribute to building a CCSC. In a potential majority of highly responsible citizens, this contributes to the building of sustainable and inclusive societies, cities, and a wider scope of progressiveness in Malaysia.

More
© Text is available under the terms and conditions of the Creative Commons Attribution (CC BY) license; additional terms may apply. By using this site, you agree to the Terms and Conditions and Privacy Policy.
Upload a video for this entry
Information
Subjects: Political Science
Contributor MDPI registered users' name will be linked to their SciProfiles pages. To register with us, please refer to https://encyclopedia.pub/register :
Seng Boon Lim
View Times: 600
Revisions: 2 times (View History)
Update Time: 14 Sep 2021
Table of Contents
1000/1000
Hot Most Recent