Submitted Successfully!
Thank you for your contribution! You can also upload a video entry related to this topic through the link below:
https://encyclopedia.pub/user/video_add?id=6129
Check Note
2000/2000
Polyethylene Glycol
Edit
Upload a video
This entry is adapted from 10.3390/nano11010086

Lately, polyethylene glycol with nanoparticles has been demarcated as an innovative class of phase change materials with conceivable uses in the area of convective heat transfer. The amplified thermal conductivity of these nanoparticle enhanced phase change materials (PCMs) over the basic fluids (e.g., polyethylene glycol—PEG) is considered one of the driving factors for their improved performance in heat transfer.

One of the first comprehensive reviews on thermal storage systems and PCMs was accomplished by Zalba et al. [1] in 2003. The authors listed more than 150 materials used in research as PCMs, extracted from 230 references. This outstanding contribution is presented under three sections: materials, heat transfer, and applications. PCM applications can be classified as ice storage, building applications, conservation and transportation of temperature sensitive materials, water tanks vs. PCM tanks, and many others.

Sharma et al. [2] also conducted a review on thermal energy storage (TES) systems with phase change materials and their applications. The authors discussed energy storage methods, outlining mechanical, electrical, thermal, and thermochemical energy storage applications. They also discussed the sufficient properties needed for a specific PCM to be used in the design of a TES system and concluded that a good phase change material should have good thermophysical, kinetic, and chemical properties, as follows [2]:

The classification of PCMs is illustrated in Figure 1. A complete list of all PCMs by category can be found in both Zalba et al. [1] and Sharma et al. [2].

The advantages and drawbacks of classes of PCMs are depicted in Figure 2. 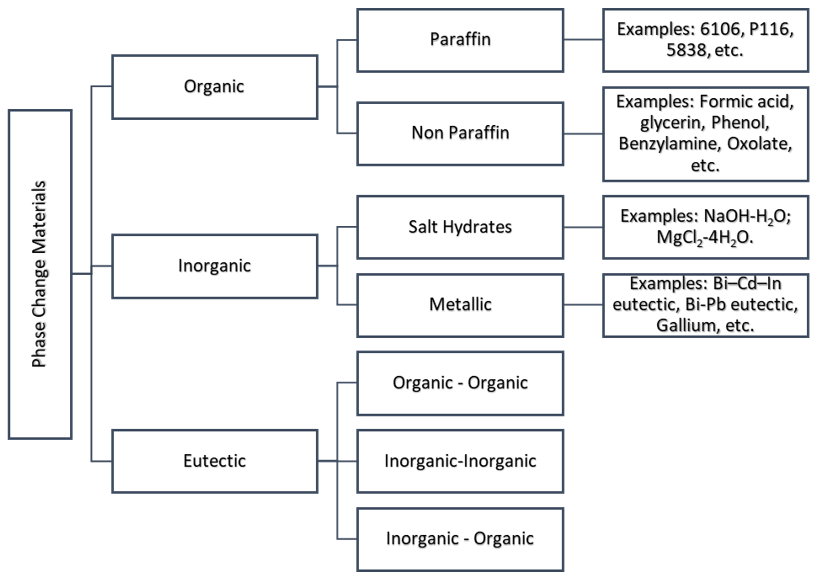 Polyethylene glycol (PEG), alongside paraffin and fatty acid, is an organic PCM, and it has a congruent phase change with a good nucleation rate (see Cabeza [7] for more details). Chemically, PEG is a polyether compound with countless uses, from industrial manufacturing to medicine. The structure of PEG is commonly expressed as H–(O–CH2–CH2)n–OH, and its application areas are outlined as follows:

The name PEG is usually followed by a number that signifies the average molecular weight of the compound. Table 1 depicts some basic data on studied forms of PEG, while Table 2 shows a summary of their thermophysical properties at ambient temperature (i.e., 25 °C) unless otherwise specified (see the viscosity values column).

Table 2. Thermophysical properties of several forms of PEG, as identified in the literature.

PEG reveals high latent heat storage capacities at melting temperatures that can be adjusted by fluctuating the molecular mass of the polymer, as outlined in Table 1. In order to improve the thermal conductivity and the heat transfer behavior, nanoparticles are added to PEG, as in nanofluid or nanocomposite manufacturing.

This paper is dedicated to outlining and briefly discussing the thermophysical properties of state-of-the-art PEG-based heat transfer fluids obtained by suspending different kinds of nanoparticles in liquid polyethylene glycol. The suspension manufacturing follows the regular procedures applied to nanofluids, which include the mixing of the liquid with the nanoparticles, according to calculated quantities, depending on the final mass or volume fraction of nanoparticles in the fluid, and applying several sonication treatments (see [8] for example).

This section outlines the outcomes of studies on nanoparticle enhanced PEG in terms of its relevance as a new heat transfer fluid. In short, a new nanoparticle enhanced heat transfer fluid has to comply with several guidelines, such as high thermal conductivity and a moderate increase in viscosity. The discussion starts with thermal conductivity, which is by far the most examined thermophysical property. This section also contains an outline of density, viscosity, and specific heat capacity experimental results.

As seen in Table 3, all the studies revealed an augmentation of thermal conductivity when nanoparticles were added to the base fluids. In terms of thermal conductivity variation with temperature, one can easily notice that most of the researchers found a decrease (see for example [9][17]), while some found that temperature has no major influence on experimental values (see for example [18][22]).

In Figure 3 it can clearly be seen that the influence of nanoparticle type and concentration is not consistent, since for 0.1 wt. % the augmentation is maximum for MWCNT addition, while for 0.5 wt. % the maximum is attained for graphene (GnP).

Unfortunately, no valid explanation on NP type influence was found in the literature, and a further comparison is not possible due to data scattering, as can be seen from Table 3.

Density experimental results are depicted in Table 4, and it can be noticed that very few studies have been conducted. Nevertheless, an initial conclusion is clear, pointing to two major conclusions: 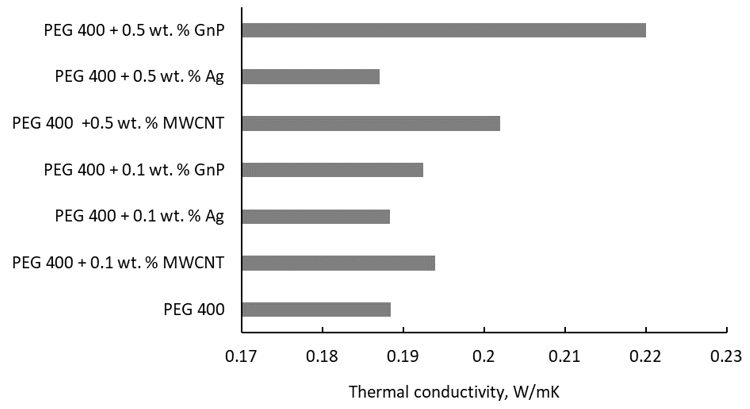 Viscosity results are also very few and are scattered in the literature, and this is mainly because this parameter was not monitored for most of these nanoparticle enhanced PEG due to their final application in real life cases.

Some comprehensive studies on PEG-based fluids were conducted by Marcos et al. [9][17][18], and their conclusion was that the viscosity increases with nanoparticle addition and decreases with temperature. All the base fluids were found to be Newtonian as while adding nanoparticles the flow behavior changed. This phenomenon is also observed for nanofluids.

Marcos et al. [17] found a shear-thinning behavior that was more pronounced with the growing MWCNT concentration. Similarly, a shear-thinning non-Newtonian behavior was also noticed by Yapici et al. [26] in their study of 1–10 wt. % TiO2 nanofluids based on PEG 200. More details are given in Table 5.

From the results depicted in Table 5 it can be seen that as the temperature increases, the viscosity decreases, and this is a normal phenomenon for most of the fluids. The phenomenon relies on the intermolecular attraction between the nanoparticles and their base fluids failing. Heating of most liquids leads to an increase of energy in the fluid. This intensification in energy increases the molecules’ random motion and fading of intermolecular forces holding the fluid molecules. This results in an decreased resistance of the fluid to shearing flow and thus a decrease in viscosity [28].

The comparison of literature data in Figure 4 shows that the addition of Ag nanoparticles produces a slight increase in the viscosity of PEG, while 1% MWCNTs highly upsurge the PEG 400 viscosity. 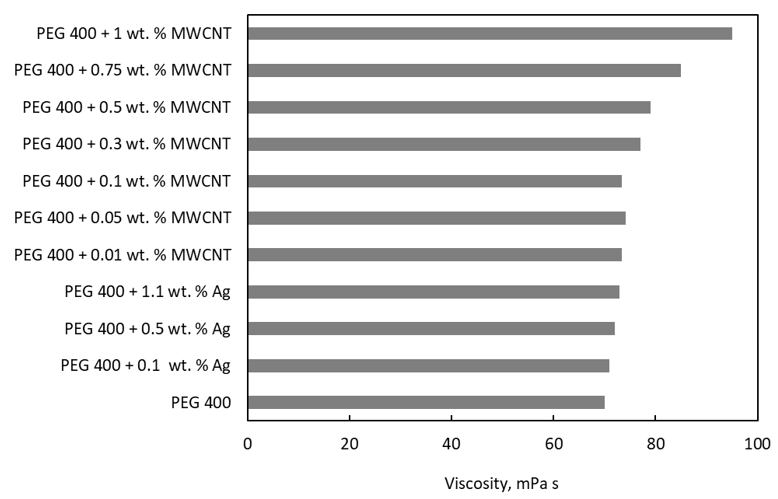 Figure 4. A comparison of viscosity values with PEG 400 as the base fluid.

Figure 5 depicts a comparison of experimental data on viscosity upsurge when MWCNT nanoparticles are added to three PEG base fluids (i.e., PEG 200, PEG 300, and PEG 400). Numbers show that if highly conductive nanoparticles are added to less viscous fluids (i.e., PEG 200 versus PEG 300 and PEG 400), the viscosity increase is higher, up to 110% for 0.5 wt. % MWCNTs in PEG 200.

To conclude, even various PEG base fluids were found to have a Newtonian flow behavior, nanoparticle addition modifies the flow into a non-Newtonian one, as all of available results demonstrated. Another observation is that adding nanoparticles increases the viscosity. This phenomenon is a normal one also encountered for regular nanofluids, and the explanation relies on the increase in shear rate particle–particle interactions that become weaker or are even broken down. Another explanation relies on the drag effect of individual nanoparticles (i.e., due to Brownian motion). Consequently, the global drag effect present in the medium is amplified, leading to an escalation in energy dissipation generating the augmentation in the nanofluid viscosity [28]. 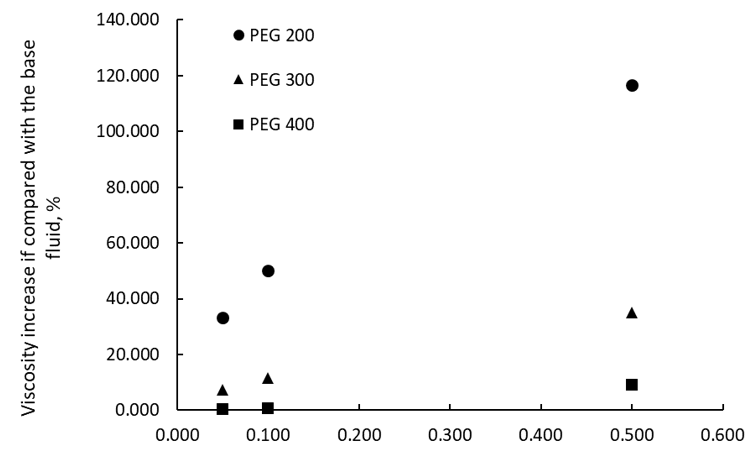 Figure 5. A comparison of adding MWCNTs to different PEG base fluids at 288.15 K.

Marcos et al. [9] performed experiments in the range 283.15–333.15 K with Ag–PEG 400 and found that adding nanoparticles to the phase change material has very low influence on specific heat capacity values.

More
© Text is available under the terms and conditions of the Creative Commons Attribution (CC BY) license; additional terms may apply. By using this site, you agree to the Terms and Conditions and Privacy Policy.
Upload a video for this entry
Information
Subjects: Nanoscience & Nanotechnology
Contributor MDPI registered users' name will be linked to their SciProfiles pages. To register with us, please refer to https://encyclopedia.pub/register :
Alina Adriana Minea
View Times: 1762
Revisions: 2 times (View History)
Update Time: 08 Jan 2021
Table of Contents
1000/1000
Hot Most Recent