Submitted Successfully!
Thank you for your contribution! You can also upload a video entry related to this topic through the link below:
https://encyclopedia.pub/user/video_add?id=6082
Check Note
2000/2000
Nuclear Matrix Metalloproteinases
Edit
Upload a video
This entry is adapted from 10.3390/biology9120480

Matrix metalloproteinases (MMPs) are zinc-dependent endopeptidases that are responsible for the degradation of a wide range of extracellular matrix proteins, which are involved in many cellular processes to ensure the normal development of tissues and organs. Overexpression of MMPs has been observed to facilitate cellular growth, migration, and metastasis of tumor cells during cancer progression. A growing number of these proteins are being found to exist in the nuclei of both healthy and tumor cells, thus highlighting their localization as having a genuine purpose in cellular homeostasis. The mechanism underlying nuclear transport and the effects of MMP nuclear translocation have not yet been fully elucidated. To date, nuclear MMPs appear to have a unique impact on cellular apoptosis and gene regulation, which can have effects on immune response and tumor progression, and thus present themselves as potential therapeutic targets in certain types of cancer or disease. Herein, we highlight and evaluate what progress has been made in this area of research, which clearly has some value as a specific and unique way of targeting the activity of nuclear matrix metalloproteinases within various cell types.

Matrix metalloproteinases (MMPs) are involved in the degradation of extracellular matrix (ECM) proteins and regulate many fundamental cellular processes during normal bodily development and function [1]. As the ECM is important in maintaining the mechanical and biochemical properties of tissues, its normal turnover and regulation by MMPs is necessary to permit multiple functions, as in the cleavage and activation of signaling molecules, cellular differentiation, and wound healing [2][3][4][5][6][7]. However, dysregulation of MMP activity can contribute to a variety of pathological conditions. For example, some have been seen to modulate matrix erosion in osteoarthritis and rheumatoid arthritis, whereas expression of others is associated with the formation of atherosclerotic lesions, platelet aggregation, and the regulation of factors associated with cardiovascular disease [8][9]. Predominantly, the roles of MMPs in malignant tumor initiation, metastasis, and angiogenesis have received the greatest attention and which have highlighted them as good potential therapeutic targets for the treatment of certain types of cancer [9].

Structurally, MMPs share a common protein domain structure (Figure 1). For most MMPs, the main components are a signal peptide (that directs synthesized protein into the secretory pathway), a highly conserved amino-terminal pro-domain, a catalytic domain that contains a zinc ion binding site, a linker domain, and a carboxyl-terminal hemopexin-like domain (HEX), that determines substrate specificity and localization and contributes to the enzymatic activity of MMPs [11]. 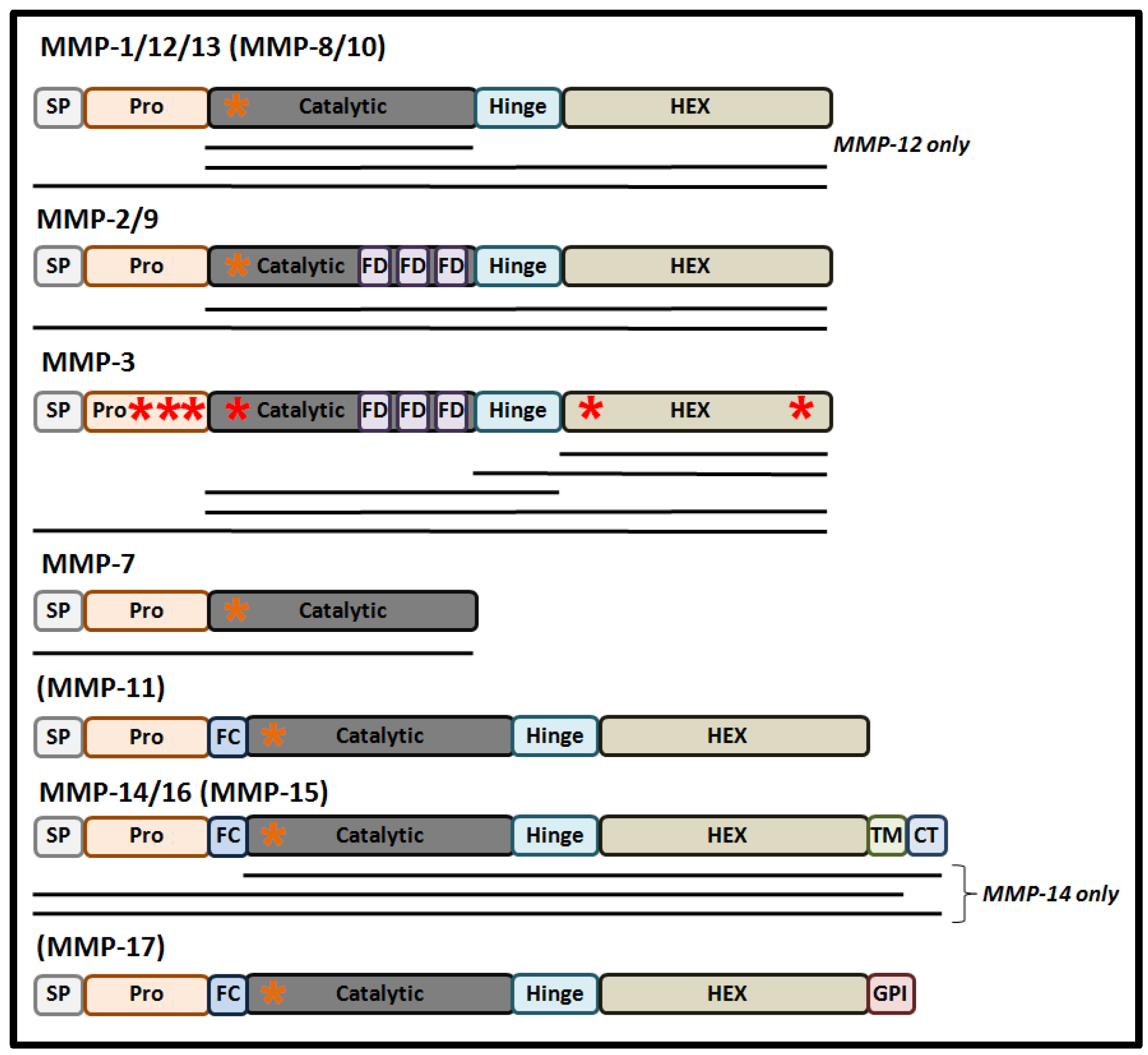 Figure 1. Domain structures of human matrix metalloproteinases (MMPs). Here the domain structures of nuclear MMPs (nMMPs) and MMPs, which have not been found in the nuclei but possess nuclear localization signals (NLSs) (placed in brackets), are presented. NLSs are indicated by the red asterisks (if their nuclear-trafficking properties have been proven experimentally) or by the orange asterisks (if the NLS has been identified by bioinformatics alone). Horizontal lines indicate the isoforms of MMPs, which have been found in nuclei. SP, signal peptide; Pro, pro-domain; FC, furin cleavage site; FD, fibronectin domain; HEX, hemopexin-like domain; TM, trans-membrane domain; CT, cytoplasmic tail; GPI, glycosylphosphatidylinositol.

These proteases are synthesized in the form of pre-pro-MMPs, with their enzymic activation occurring through the process of maturation as the proteins progress through the secretory pathway [1]. The first step of maturation is removal of the secretory signal peptide following the course of protein translation, giving rise to an inactive pro-MMP in which the inhibition of the catalytic site occurs through its resident Zn2+ ion binding a cysteine residue within the “cysteine switch” motif (PRCGXPD) present in the pro-domain [12]. Activation of the pro-MMP may occur in a variety of different ways, arising in a number of MMP forms containing the full-length pro-domain, a processed form of the pro-domain, and in MMPs lacking the pro-domain. In the former two MMP derivatives, conformational changes caused by mechanical or chaotropic agents can lead to the disruption of the Zn2+-Cys interaction resulting in pro-MMP activation in the absence of pro-domain cleavage [13]. Moreover, processed cleavage and removal of the pro-domain, by plasmin or trypsin, can mediate a conformation change of the protease resulting in full activation of the MMP intermediate [13]. Normally, full cleavage of the pro-domain is either mediated by the furin pro-protein convertase in the trans-Golgi network, auto-catalytically, or by other MMPs at the cell’s surface, either within the ECM or the nucleus [12][14][15]. The activity of MMPs can also be regulated by post-translational modifications, such as glycosylation, phosphorylation, and by glycosaminoglycans (GAGs). For example, glycosylation can stabilize a complex between MMP-14, TIMP2, and pro-MMP-2 as a step necessary for the cell-surface activation of MMP-2 [16]. Alternatively, glycosylation can promote MMP-9 secretion and activation, while also stabilizing the formation of MMP-17 dimers [17]. As an important step for the classical mode of MMP activation, a number of recent studies have also reported that some MMPs are also responsive to redox-mediated activation [18].

The tissue inhibitors of metalloproteinase (TIMPs) have also gained significant importance over the years based on their developmental role in normal tissue homeostasis and disease progression and their abilities to modulate MMP protease activity [19]. Four TIMPs (TIMPs 1-4) have been identified, and their mechanisms of MMP inhibition have been established through a number of structural studies. Residues 1–4 of the TIMP-1 amino-terminal domain interact with the primed side of the MMP binding pocket, where Cys-1 can coordinately bind the catalytic site Zn2+ ion. Simultaneously, five residues (spanning amino acids 66–70) from TIMP-1 can occupy the non-primed site [20]. These potential modes of binding were also shown to be highly conserved among TIMP-2, TIMP-3, and TIMP-4 [20][21]. Biologically, elevated TIMP expression levels have been shown to contribute to enhanced ECM accumulation and deposition, while reduced TIMP expression leads to enhanced matrix proteolysis, thus highlighting their importance in modulating ECM dynamics and plasticity [1][22]. TIMPs can also form non-inhibitory pro-MMP/TIMP/MT-MMP complexes, as in the instance of TIMP-2 complexing with MMP-14 and which can activate pro-MMP-2 in human fibrosarcoma, breast, and melanoma cell lines [16]. While TIMPs are generally found within the ECM, a number of studies have demonstrated that they may also reside in the nucleus of cells, as seen for TIMP-1 [23][24][25].

Over the years, matrix metalloproteinases have been pursued as good targets for therapeutic development [9], and have the potential to be targeted at several levels of their synthesis and maturation, the proposed stages of which include inhibition at the transcriptional level, during zymogen activation, and at the level of substrate catalysis by the active enzyme [9]. At the moment, there are MMP-directed targeted strategies coming into fruition for the treatment of inflammation, heart disease, lung diseases, and ischemic stroke [26][27][28][29][30]. Simultaneously, the search for more specific and better MMP inhibitors is still ongoing, driven by limited options for targeting specific MMPs within a clinical setting [31]. Consequently, novel strategies embodying greater specificity and efficacy have taken on a greater priority in targeting MMPs.

Over the last ten years, the nuclear localization of MMPs (nMMPs) has been an increasingly reported phenomenon, which has been observed in high-grade tumors, correlated with tumor volume, and in some instances has been associated with poor prognosis in a number of disease types (Table 1) [32][33][34][35][36]. Collectively, such findings suggest an important functional role for nuclear MMPs and that such a localization effect does have biological and clinical significance. In support of this, it is interesting to note that nuclear localization has been reported for other ECM proteases as well. For example, nuclear cathepsins L and D have been reported to exhibit biological effects which can contribute to tumor progression [37][38][39]. Collectively, the localization of such proteases have the potential to activate or deactivate transcription factors, regulate chromatin remodeling, apoptosis, alter the structural elements of the nuclear matrix, and participate in molecular events that lead to cell proliferation and carcinogenesis [40][41][42][43].

What signaling cues cause MMPs to be directed to the nucleus still largely remains unknown, with a number of mechanisms being proposed, which stem from environmental factors to cellular metabolism [73]. Nevertheless, for several MMPs, researchers have been able to propose some molecular mechanisms responsible for nuclear MMP translocation [74][75][76][77][78][79][80][81].

More
© Text is available under the terms and conditions of the Creative Commons Attribution (CC BY) license; additional terms may apply. By using this site, you agree to the Terms and Conditions and Privacy Policy.
Upload a video for this entry
Information
Subjects: Oncology
Contributor MDPI registered users' name will be linked to their SciProfiles pages. To register with us, please refer to https://encyclopedia.pub/register :
Anastasiia Petushkova
View Times: 81
Revisions: 3 times (View History)
Update Time: 05 Jan 2021
Table of Contents
1000/1000
Hot Most Recent